The Tactics Shaman: Sharpening the Blades of Khorne 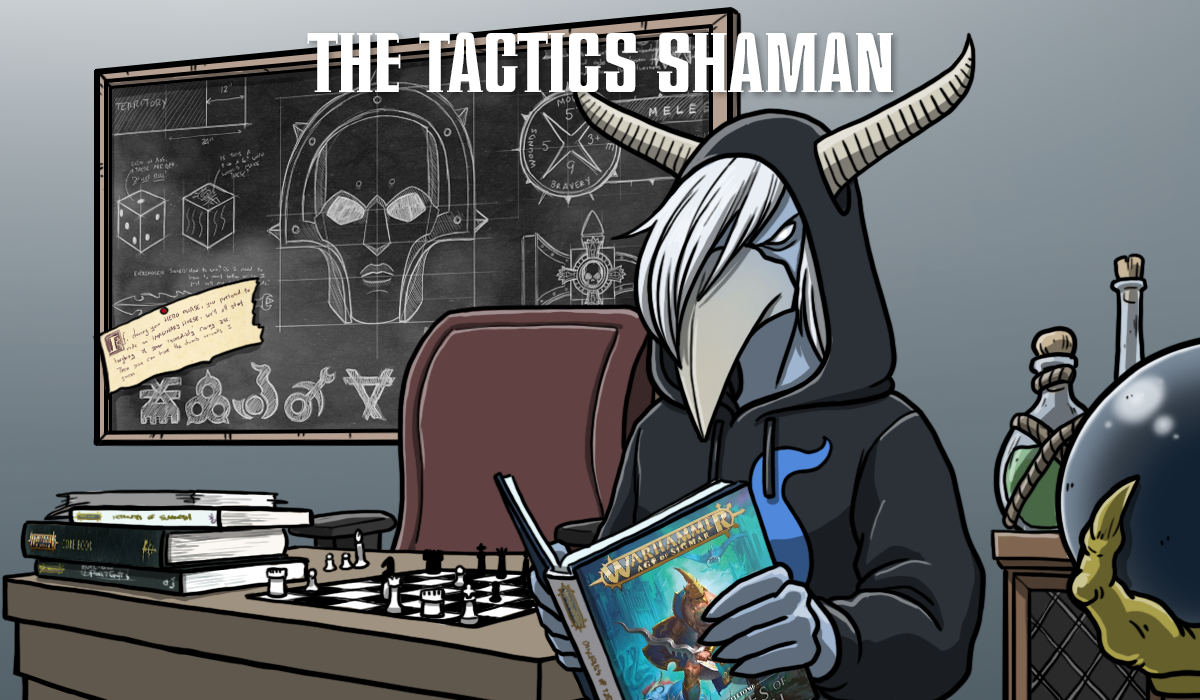 Blades of Khorne have been one of the most updated factions since AoS began, being featured with the first ever Age of Sigmar starter set, up to and including the Wrath of the Everchosen Chaos Supplement. Its competitive edge has probably been one the most in-flux as well. Today, as we did with Nurgle and Slaanesh previously, we will take a look at some builds that have been doing well, and some that have fallen from grace.

This is one of the Chaos books that, through game/book design, understands how it wants to build its armies. You have battalions + subfactions that tell you: Build big, scary, Daemon monsters/units, such as the Tyrants of Blood battalion and the Reapers of Vengeance and The Baleful Lords subfaction.

And then you also have similar design directions into the Mortal side of the book: Brass Stampede and Gore Pilgrims, combined with The Flayed and Goretide subfactions.

These all give you a pretty clear direction in how to build your army so that it is coherent and abilities begin to stack quite nicely. Not only are these directions helpful, they also, for the most part, don’t hinder you from making a mixed list of daemons and mortals, or even Gor from the Beasts of Chaos battletome via the Brass Despoilers battalion. And, to Top it off, Slaves to Darkness units also copy-paste pretty easy and regularly into top end Khorne lists. Some lists include Slaves to Darkness as 90+% of the entire list, in fact.

Most Khorne lists on top end competitive builds will focus around the Big Man himself: Archaon. Though when I say “Top end competitive” they are still at best a 4-1 army. The “Top 5” competitive factions generally just have less bad matchups, or have ways around builds like these. Since he has pretty much every Chaos keyword (just short of including Skaventide, and some sort of beast keyword,) he fits into many Allegiances quite easily.

Some lists you may have seen with him recently would be along the lines of Battle of Copenhagen’s latest TTS event, ran by the one and only: Owen Jackson:

So, as stated above, we have Archaon. 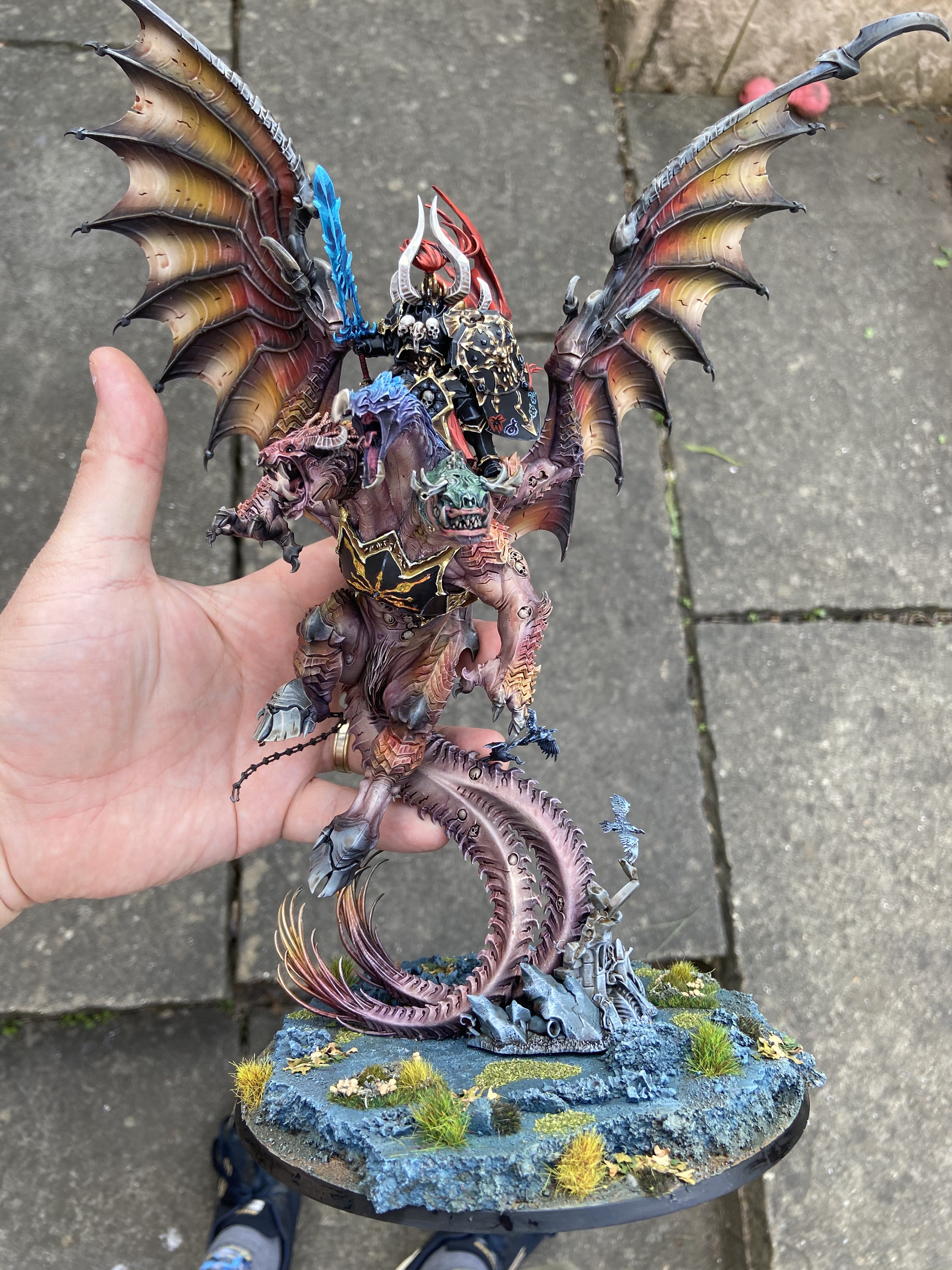 Archaon is the main hammer of this army. The Reapers of Vengeance Command ability allows a Reapers of Vengeance Daemon unit wholly within 8” of a Daemon hero, if they are still within 3” of an enemy unit after they have swung in the combat phase, Pile In, and attack again with all profiles. Seems good? (Hey look, Archaon has both of these keywords!)

We also have the Bronzed Flesh Prayer, which allows the Chaos Warshrine, who is another Khorne Priest, Give a friendly Khorne Unit +1 armor save. So, apply that to Archaon and now he’s got a 2+ armor save, and 20 wounds for your opponent to carve through.

The Warshrine also has an innate aura that gives Slaves to Darkness units wholly within a 6+ DPR (Remember, Archaon has that keyword). The warshrine also has its very own warscroll prayer with huge implications that can be changed every turn. Your options range from: reroll charge and hit rolls or reroll wound rolls and add another +1 to save rolls, or you can reroll hit, wound, and charge rolls, too, Reroll save rolls and give Archaon a SECOND 4+ deny effects of enemy spells… so, you have a lot of range for any predicament you might find yourself in through the warshrine.

The list also has a Bloodstoker, who, (Just like all these prayers,) has an ability that cannot be interacted with or stopped, which applies to a Khorne Mortal Unit wholly within 8”, and add +3” to run and charge rolls, and, reroll wound rolls. Remember when we talked about Archaon having the Daemon and Khorne keyword? Well, he also has the Mortal Keyword, so the Bloodstoker can also add his buff to Archaon.

The cheeky Bloodthirster? It also has a command ability that allows a Khorne daemon unit within 16” to activate in the combat phase at 6”, and Pile in 6” instead of 3”. Once again, we apply this command ability to Archaon, so if his movement 14, with +3, potentially rerolling charge rolls that didn’t land, you could still pile in 6”, or, even better, Move 14″, Run d6 (a command point can give an auto 6” if you need it) and +3 from the blood stoker. So in total we’re looking at the ability to run 23” and then Pile in 6” into the closest enemy, attack, then pile in again another 6” and swing a second time. All of this with one of the most aggressive/offensive monster heroes in the game.

And you might think to yourself, that this is a lot of command points spent in 1 turn (3, if you don’t roll the 6 to run.), do you have enough to do all of this? Yes you usually will. The battalion in the list gives you 1 before the game starts.( 1/3) You get 1 at the start of each of your turns. (2/3) And, for the third, as long as Archaon is alive and on the table: His ability: Warlord Without Equal, Gives you another command point every turn.(3/3)

You may think this is putting all of its eggs in 1 Giant Archaon shaped basket, which is true. However, let’s bring it back to talking about the army allowing you to overlap abilities if you take a mix of daemons and mortals.

The Warshrine isn’t crazy in combat but can hold its own especially when it is giving itself its own buffs like reroll hit & wounds, or rerolling charges, Bronze Flesh for +1 save (Putting it to a 3+), Blood stoker can give it +3″ run/charge. Reroll all wound rolls on top of that, too.

The army is also built so that just about every hero in it has a spell ignore of some sort, The Bloodthirster has the Skullshard Mantle Reapers of Vengeance relic: Each time the bearer is affected by a spell or endless spell, you can roll a dice, on a 2+ ignore that spell. Plus, the Bloodthirster also has the command trait to allow it to dispel like a wizard, and if it rolls an natural 8, the spell is auto unbound (no matter the casting roll) and the wizard thales d6 mortals. The Slaughter Priest has the Brazen Rune, which gives him a 2+ DPR from spells, and a once per game, “break the relic” to auto unbind a spell. (they then lose the 2+) And of course, Archaon being a wizard can roll to deny like any wizard can, but if he fails, he also has a built in 4+ spell effect ignore.

The Untamed beasts in the list also provide a powerful screen to help blunt other armies alpha-stikes, and 2 real easy blood tithe points when they die. The battalion also gives the pretty mediocre combat of the Bloodreavers turn up to, not really an 11, but, maybe like a 4. And if the Bloodstoker whips them, reroll wounds, to help those, now x2 rend 1 attacks get to where they need to go. (they are still just mainly present for objective grabbing and for blood tithes when they die.) the battalion is mainly for the extra relic, command point, and lower-ish drops.

There are quite a few ways to play Archaon in this army, and currently for the “Bleeding edge” competitive Khorne armies that is gonna be what you see. As much as I would LOVE with all my heart to see Vorgaroth the Scarred & Skalok the Skull Host of Khorne AKA The Khorne Dragon, on the table and competitive. However, being One Thousand One Hundred points, they just can’t cut it. They can kill a lot, but its monster-degradation chart tanks their output like CRAZY and they have almost nothing to stop incoming damage beyond an OK armor save. (The bastiladon starts on a 1+ unrendable save, for 220 points and has 33% of the wounds… and can be in a faction that gives it more wounds and reduces incoming damage… they are not the same. So sad.) and, a Ghoul King on Terrorghiest could easily 1 round K.O. the dragon without even breaking a sweat… anyway. Moving on. 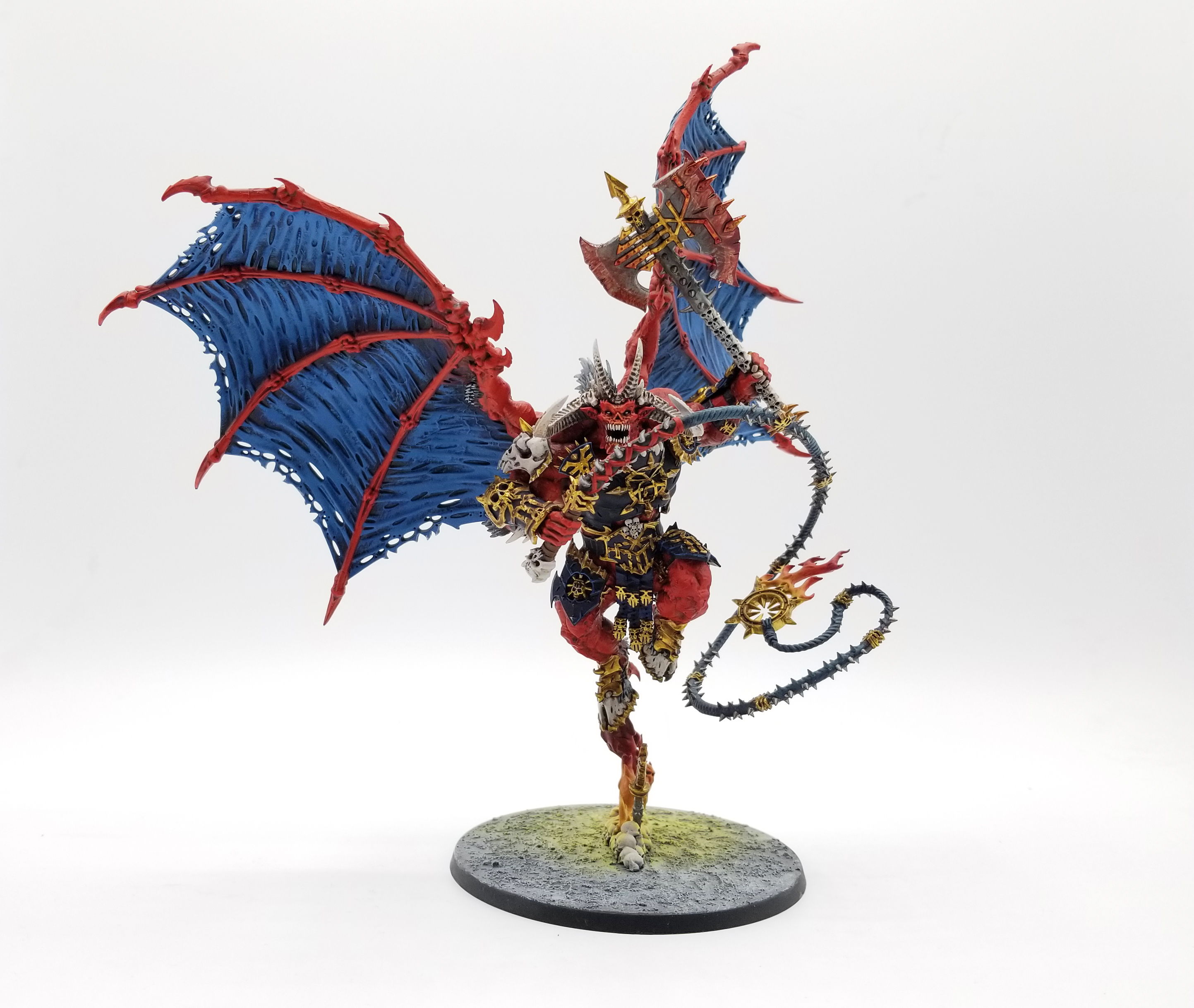 If you aren’t looking for top tables, you can definitely make a good  2-3 or 3-2 showing at events with Bloodthirster based lists. Baleful Lords (a subfaction for Khorne out of the Wrath of the Everchosen) or Reapers of Vengeance can both make some decent “big angry daemon” lists, using either Tyrants of Blood Battalion, but may also have legs in a Bloodhost Battalion. (There is a reason the Bloodthirsters have been steadily decreasing in points since their book dropped 2-3 years ago).

There are a few ways to build the Archaon list in Khorne, and this is mainly how this book has maintained its legs still being semi-relevant in tournaments, with the argument that Archaon is still just better put into armies like Tzeentch. (and this is also why we really didn’t talk about Archaon in the Nurgle or the Slaanesh reviews, since he actually can compete properly in these other 2 armies.)

Well I think that is all got to talk about for today. If you want to dive further into various builds like this last one or critiques on your own, feel free to check out my Patreon  otherwise I’ll see you back here next week! Thanks for looking!

Have any other questions you’d like to see us take on? Drop us a note in the comments below or email us at contact@goonhammer.com.