TheChirurgeon’s Road Through 2021, Part 20: Looking back on the Year That Was

Welcome back, dear reader, to my ongoing chronicle of my journey through 2021. I’ve got some games lined up this week, and some hobby stuff, and I’ll talk about it all next week. In part because I haven’t played the game yet, and in part because this week I’m looking back on everything I accomplished in 2021 when I started writing this dumb series.

First off, if you haven’t read the entire saga and would like to, you can do that more conveniently now by checking out the links below:

Prior to 2021 my tournament resume was pretty sparse. I’d gone to NoVA in each of 2018 and 2019 (rip) and my plan in 2020 was to finally make the jump to more competitive play, starting with the Valentine’s Day Massacre event run by Shane Watts. Needless to say, my competitive career didn’t really take off last year and as 8th wound down I found myself in a bit of a dilemma. Namely that while I’d played quite a bit of 40k by casual standards, the majority of my games had been against my friends – who also play pretty casually. At the same time, I was being asked to write more and more about the game, and to do more on the competitive side. Most of the time that meant James “One_Wing” Grover taking point on the content while I helped fill in around the edges, and talking to or interviewing other players for insight.

When 9th edition dropped – and with it an opportunity for us to review advance copies the game – I decided I wanted to start ramping up in the new edition. And so mid way through 2021, once I’d been fully vaccinated and cases were on the decline (something which didn’t last), I started planning to go back to events.

A brief history of my playing 40k

I originally started playing 40k back in 2nd edition, but I haven’t exactly kept a lot of notes on my time playing in those days. I got into the game back in 1996, when I was living in Italy and going to scuola media/liceo scientifico. I used to game at a rad store called Quinta Dimensione, where I learned to speak Italian mostly playing Magic and losing games of 40k. In my two years there I probably played around 20 games of 40k, mostly against Giovanni’s Eldar, who beat the shit out of me in every single game we played.

When I came back to the states I laid off 40k for a bit until 3rd edition released, at which point I got back into it hard. I started playing and painting more, and went to the occasional tournament, mostly gaming at a rad store in Newark, Delaware called The Days of Knights. I probably played a few dozen games of 3rd and 4th edition over the next few years, plus a few games in college, before the 4th edition Codex: Chaos Space Marines came out and I was so disgusted I stopped playing altogether.

I finally picked up again in earnest in 6th edition, when I started playing in New York against BuffaloChicken, and from there I started keeping proper tabs on the games I played, tracking wins and losses, scoring and missions, and taking notes. In 8th edition I bought a copy of the 40k notebook – the good one, not the stupid Crusade journal – and have been keeping notes on every game I play in it ever since. It really helps when I need to go back and reconstruct a game for a battle report or write-up, and I like keeping a paper record of things like CP accumulated during a game.

I also started keeping a spreadsheet of all my game results. With this, I’ve been able to track my games progress by year and edition. Here’s how I’m currently trending when it comes to games: 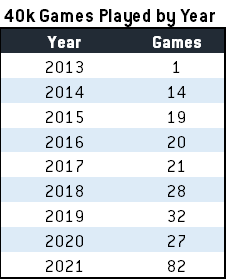 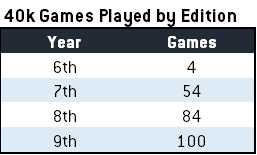 Over the last year I’ve really come along in how comfortable I am playing and talking about the game as a whole, but it took a lot of games to get there. You figure on average I’m spending 3.5 hours per game of time (the casual games tend to take longer and involve pizza arriving mid-game), and that’s an estimated 287 hours spent playing 40k this year, or about 12 full days. Which is pretty sweet, all things considered.

One of the other things I’ve been working on this year is getting a real ITC score. And as of this writing, I’ve logged six events’ worth of games for the 2021 season, with three majors, a GT, and two RTTs in the mix. I know I said I was only going to do six events for the 2021 season but realistically I’m probably going to go to the January RTT at Asgard and then LVO at the end of the month, but those are both pending how things look re: COVID. Asgard is very good about requiring everyone be masked and I know a lot of the people attending (and they’re cool), but I’ll be shocked if there are any regulations in place for LVO, and given the way cases are trending well, we’ll see.

Those six events put me at somewhere around 500th in the ITC standings. I say “somewhere around” because I think I’m actually in the high 490s – there are currently quite a few players showing up twice on the list. Of these, my best score/showing may have been Austin – where I started 3-0 before losing to Mani – but I’m much more proud/happy with my showings at the Lone Star Open (4-2) and New Orleans (6-2), where I put together more impressive strings of wins, even if they were in the loser brackets.

Because I also played mostly with Death Guard, these results also put me at 34th in the faction rankings for Death Guard, which is something I don’t care a ton about but is kind of cool. It’s also funny to think about the fact that it was only really possible to top the Death Guard standings if you happened to be attending tournaments with them early in the year when they were still a top-tier faction.

The other cool aspect of this is that I was finally able to contribute meaningfully to the Goonhammer team score. Those standings are even more fucked than the individual standings when it comes to inexplicably duplicated scores, but the actual 10 event scores are correct, and I’ve got one of our better scores:

Mostly I’m happy to have finally beaten Chase’s stupid RTT score. You can also see the ITC’s incredibly dumb scoring method on display here, where finishing 20th a super major is worth more points than winning a GT because there were more players at the the former. Or likewise, finishing 36th at Austin was worth more than a 3rd place finish at the Goonhammer Open. I have my doubts that larger events are more difficult to win, but I’ll save those thoughts for a future Meta Analysis.

I painted quite a bit in 2021, most of it motivated by the need to prep an army for competitive play. Generally speaking, here are the highlights:

They’re not entirely done – I still have a few terminators, some Possessed, a trio of Deathshroud, a Lord of Virulence, and a Miasmic Malignifier to paint – but I’ve basically painted everything in the Death Guard range at this point. The big stuff I added this year to the army were five more Blightlord Terminators, a Heavy Blight Launcher Bloat Drone, and a converted Chaos Lord.

The Bloat-Drone is also converted from one of the ones in the Dark Imperium boxed set, using bitz leftover from the kit I used to build a Fleshmower.

In addition to my Death Guard, I also started on my Thousand Sons, completing a squad of Rubrics and a Mutalith Vortex beast.

And I painted up the terrain for my GW layout practice table, which I detailed in part 11.

There were also a number of odds and ends in what I painted this year. Here are just a few things I painted, mostly working on Saturday night paint streams with my friends Greg, Dylan, Campbell, Fowler, Colin, and Joey.

It was a bit of a quiet year for me hobby-wise, especially compared to 2020, and I’m eager to start putting in some real work over the next few weeks to really up my hobby progress going into 2022.

So what did I learn this year? What, overall, did 100 games of 9th edition teach me, and what of it is useful for the future? Well, here are some of the more important points – I think – that I learned this year with regard to play and just competing at events.

That’s an excellent question. I’ve got another game I’m playing today against my friend Erik, and I may potentially get another game in next week against Russell Tassin, who I’ve been excited to play against after finally meeting him in person at Austin. I think I’m gonna try out Magnus in my next Thousand Sons game just for funsies, and if I can make it a double, that’ll be even better.

Beyond that, who knows? I think I’m gonna be at Asgard again but LVO is another matter. It’ll depend largely on COVID; not just because I may be worried about cases – my whole family is now vaccinated so that’s less of an issue – but also because if most of my friends aren’t attending I don’t really want to spend a thousand dollars on travel and a hotel to be there. I’m not going to even come close to winning at LVO and so if it’s not going to be like Nerd Summer Camp 2022 the appeal is significantly diminished for me. Also, I’m kind of looing forward to the 2022 missions pack already and playing another event with the current pack (and points costs) seems exhausting. Thousand Sons may still be an option, or I may be looking at bringing the Death Guard back out and tweaking the list. Not sure yet.

And that’s it! Stay tuned next week when I’ll be back with a recap of the game and hobby progress I make this week. In the meantime, have a Merry Christmas, and if you have any questions or feedback, drop us a note in the comments below or email us at contact@goonhammer.com.