TheChirurgeon’s Road Through 2022, Part 26: Prep for the Finale Narrative

Welcome back, Dear Reader, to the ongoing story of my Warhammer 40k-themed journey through 2022, which may potentially end with some measure of competitive success. Last time around I wrapped up my time at the Games Workshop US Open in Kansas City. While competitively that trip was more a dud – I finished 4-4 and in 76th(ish) place after a series of very close losses – it still ended up being a fun trip, punctuated by a win for Best Painted.

Now there’s just one big event for me left this year: The GW US Open Series Finale in Albuquerque, New Mexico. And while I didn’t finish well enough at any events this year to qualify for the invitationals and get the free trip out of it, I was actually much more interested in the Narrative event they’re running. This three-day event will be running alongside the competitive invitationals and will feature some two hundred people vying to determine the fate of the Szarbryne sector, with some future consequences for the fluff in 40k. It sounds pretty rad.

Some Thoughts on Narrative Events

You may recall from my GHO post that I ran the Narrative 40k event at this year’s Goonhammer Open. Generally speaking, I tend to prefer narrative play to competitive – while the latter has plenty of upsides, narrative play generally ends up being much more compelling to me. The notion of each battle having consequences gives the games real weight, and carrying results from one game to the next further reinforces this, making it feel like the games you’re playing actually matter. On top of that, Narrative missions, at least when done well, create more interesting play experiences and decisions and pull you out of the comfort zone of just following a set plan that competitive events can create. Much as I enjoy games with my Thousand Sons, I pick the same secondaries in almost every mission and follow the same plan over and over, and that has gotten stale.

If there’s a downside to narrative events, it’s that people tend to mistake “narrative” for “casual,” or worse, they treat them as tournaments for bad players. To that end, it’s fairly common to see casual players at these events who don’t care about the narrative, aren’t interested in Crusade rules (or whatever the mechanics are), or have never played a game of 40k before. They want to paly some games at an event and just don’t want those to be automatic losses to competitive players and lists (though I will tell you right now that those players also tend to just lose their games to other narrative players who know what they’re doing).

This, to me, is a shame – while I’ll always encourage new players to join events and take the plunge, not many players want to sit through someone’s first game of 40k at a large event, and narrative events are decidedly more fun when you have a dedicated group of players around you who care about the outcome of the narrative and want to leave their mark. Narrative events are at their best when the players are invested in the outcome, trying to win, and having a fun time doing it and care about the mechanics of the event. On top of that, narrative events are usually more complicated than competitive ones – they tend to add extra mechanics and quirks on top of the existing rules, and Crusade adds a whole additional level of complexity to the game that most casual players are just not prepared for (this is where Administratum can be a massive help, and that’s a major reason we built it).

Back to the Narrative event this weekend. Five games over three days to determine the fate of the Szarbryne system. The event uses Crusade rules and three teams – Imperium, Chaos, and Interlopers (Xenos), though players aren’t rigidly set on those teams just because of the factions they’re playing. The first two games are at 50 PL and the final three are at 100 PL. That sucks, but at least we’ll be using the balance dataslate, so it won’t be all bonkers but we’re still using power levels written months ago and not updated to take into account updated point values.

Building a list for a Crusade event like this is a completely different beast from building for competitive play. For one, we have 150 PL to work with for a roster, from which we can draw units for 50 PL and 100 PL games. That doesn’t necessarily mean you want to use a bunch of different units, however. There are a few things to keep in mind when building a list for this event:

With that in mind, I set out to make a list for the 100 PL level. I’ve been talking about playing Black Legion for a while and I think this was a good time to switch. I had a few different things I wanted to do with the list and one of those was including one each of Noise Marines, Plague Marines, Rubrics, and Berserkers. I also wanted to use some of the character conversions for the Ezekarion I’ve been working on. And because my Black Legion are probably my prettiest army, I wanted to build something that could win me best painted. Here’s what I ended up with for my Order of Battle:

Yeah, I’ve got one special character in there, but I literally never get to play with Haarken and I’m very proud of my paint job on him. The rest of the list is pretty straightforward. I’ve got a pair of Warlord Traits on the Lord Discordant – a late addition after my game with Erik (see below), and a Black Rune of Damnation on the Terminator Champion (more on him).

I wanted to get some test games in with the list before the event, in part to get a feel for how it plays but also to reacquaint myself with the Chaos Space Marines rules, which are still a bit new to me. So I set up some test games over the weekend with my friends Luke (Chaos Knights), and Erik, the latter of whom is also attending the event. 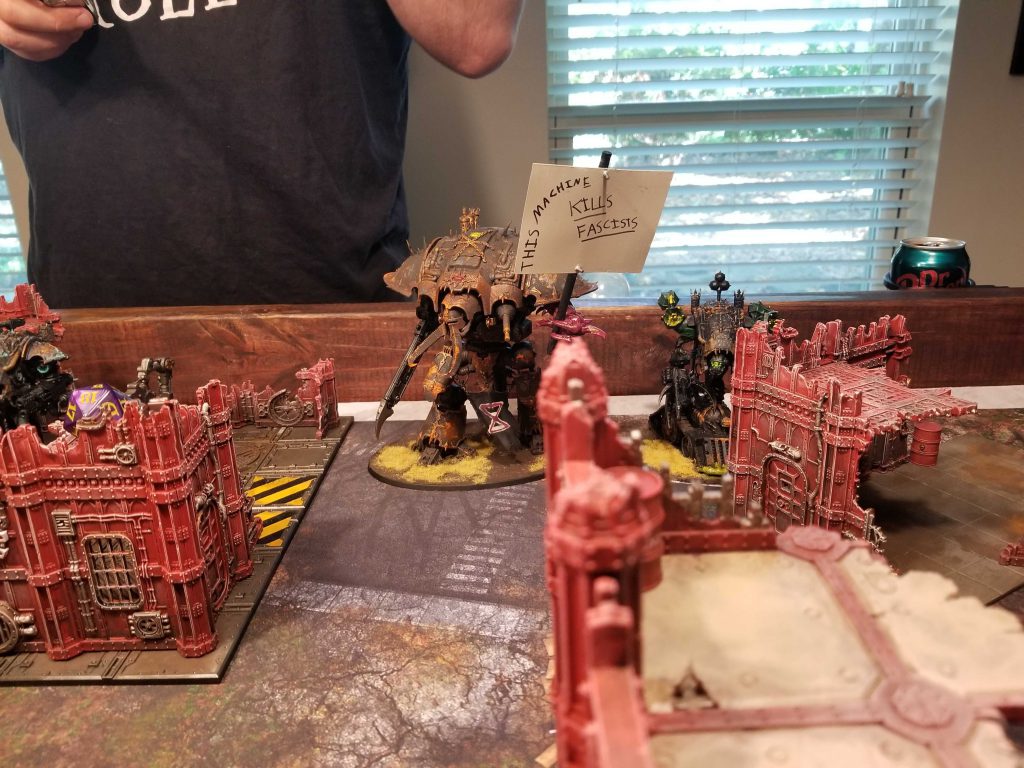 We played Ambush with me as the defender. This is an interesting mission: The Attacker has to choose prior to the game whether to press the attack, in which case they deploy normally, or to put half their army in reserves, in which case they don’t arrive until turn 3. The reason you’d do this is because Pressing the attack lets the defender choose who goes first, while the reserves strategy lets the attacker choose. Luke chose to press the attack to avoid splitting up his army and this let me set up for some good turn 1 alpha strikes, in which I killed three of his war dogs and bracketed a fourth. Luke never quite recovered from this early blow, and I was able to round the table and eventually table him by round 4, with the Obliterators, Warpflamers, and Land Raider doing the bulk of the work. 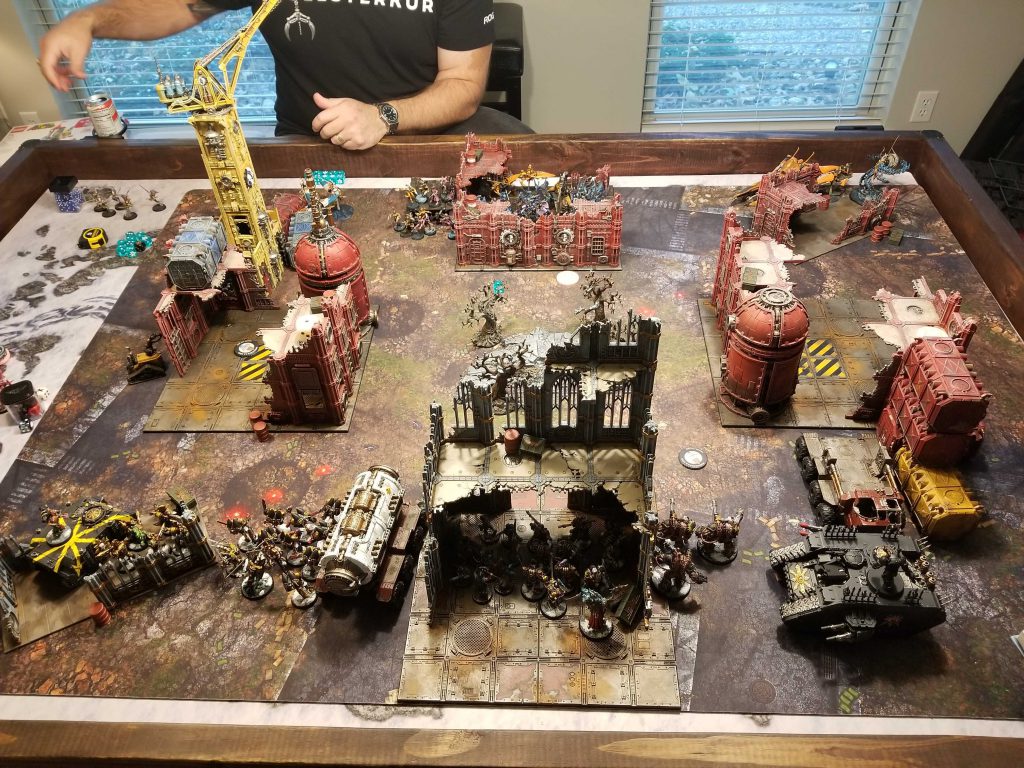 In the second game, Erik stopped by and we played a practice game with his Ynnari. This game went much worse for me, with some early game overcommits on my end that didn’t pay off and left me out of position. I lost the land raider early to some insane mortal wound output from the Striking Scorpions and the Raptors just weren’t the right tool for the job. In our postgame discussion, it became clear that the raptors and berserkers were just doing the same job, with the former not doing it quite as well as I wanted. I also really wanted a second big anti-vehicle threat, and decided that a Lord Discordant was the way to go. So I dropped the Raptor unit down to 5 models and added the Disco Lord, giving him the ability to spit out as many mortal wounds as possible.

Hoo boy. I have been insanely busy painting over the past two weeks. I wanted to not just run Black Legion at the narrative finale, I wanted to make sure my Narrative List was capable of winning best painted, and that meant putting in the extra work to make the units look as good as possible, as well as retouching some older models. Generally, I had to finish the Rubrics, Plague Marines, and Noise Marines, plus a Land Raider and a unit of Five Terminators, plus if I had time I’d need to do another 2.5 Possessed – they may not make the cut as I write this.

Overall however, the work has been going well. I’m very pleased with how the cult marines turned out: 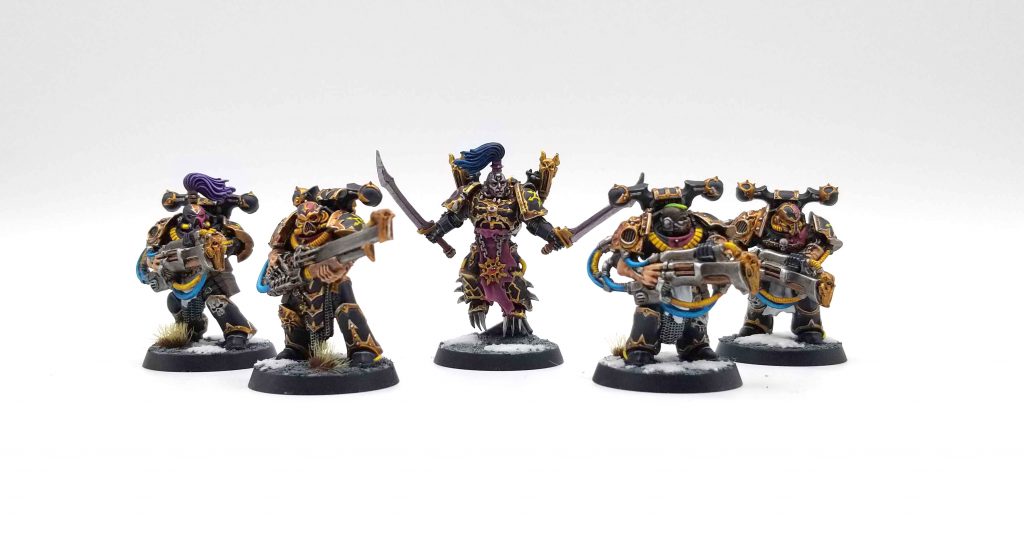 On top of that, the Land Raider is done, and I finished the Terminator Champion – who is my conversion of Falkus Kibre, a possessed Terminator who is a member of the Ezekarion. I’m also pretty happy with him, and as I write this I have the other four terminators about half done, with a plan to paint them over the next day and then I’ll try and tackle the Possessed if I have time. But if I can’t get them done, that’s OK – they’re more a nice to have and something I’ll get to after I return.

Next Time: The Event

That’s it for my prep. I’m still frantically painting but I’m sure it’ll all work out. Stay tuned this weekend for a brief update or two from the event, and then I’ll have more to say in a week or two once things are in my rearview. Until then, if you have any questions or feedback, drop us a note in the comments below or email us at contact@goonhammer.com.