Welcome back, Dear Reader, to my ongoing journey through 2022. It’s been a hell of a year, but I’m not done yet – I’ve got one more event to write about before I wrap things up in another week. So strap in for one last tournament’s worth of games.

After the Finale at Albuquerque, I took a little bit of time off from frantic hobbying. I put in some real tough hours heading into the event, and so I needed a bit of a break. That said, I did spend some time on hobby, touching up a few models and prepping some other things. I took another look at some of my models from Albuquerque that lost to Craig and decided I need to retouch some of the older ones. So I’ll be doing that, starting with my Rhino, which had some unpainted details and could use some additional detailing.

I also started working on more Plague Marines. While they aren’t the best possible unit, plague marines make a good substitute for Chosen when you kit them out with melee weapons and so I want to have a unit of 10 to play with.

Between Albuquerque and the Asgard RTT, I got in a practice game at my local GW store with my buddy Max. Max has been working on his Word Bearers and was more than happy to help me learn the competitive rules for Black Legion. So I showed up and we threw down.

The mission was The Scouring, and I took Banners, Engage on All Fronts, and Psychic Interrogation, which in retrospect was a mistake. At least, it would have been in other matchups, but I didn’t learn that lesson here – to my detriment. Max took Grind, Warp Ritual, and Exalt the Dark Gods. Two secondaries that required him to be doing stuff at the middle of the table, while there was also an objective there. This is a big gamble, since it basically relies on being able to hold that objective uncontested.

I won the first turn roll-off and went conservative, letting Max come forward before I crashed my berzerkers into him and used the rhino to clog up his movement. I managed to whittle his terminators and Possessed down early, then was able to clean up the Daemon Prince and Venomcrawlers on subsequent turns with the Noise Marines and Obliterators. It wasn’t a high-scoring game – I won 75 to 52 – but I was able to keep Max off Grind for the entirety of it, and held him to only a single warp ritual by killing his Master of Possession early.

Next up it was time to get in one more tournament before the year’s end. Unfortunately, not having time to do much painting meant I’d also not had much time to move to a more competitive army – I don’t even have as much as a full unit of Possessed done for my Black Legion yet! Faced with the prospect of going back to my Thousand Sons or taking Black Legion and likely winning best painted, I chose the legion. Yeah, I might have won with my sons but I’ve had my fill of playing them. So I went with a modified version of my narrative list, swapping out the land raider and Obliterators for Abaddon and Terminators.

It’s not great, but it has lots of tools. The Noise Marines are fine mid-range fire support. The Plague Marines can kind of act like chosen, though ideally I’d run 8 of them and fewer Legionaries. The Rubrics are great, and while they’re not good, the Berserkers can do some damage if I need.

The list isn’t particularly competitive and I expect to lose against any well tuned lists that I come up against. I can still outplay some mid-level players and factions with it, but overall it’s not going to stand up to tuned lists, decent players, or even a rough run of the dice. It has some good tricks but it wastes a lot of points on shit like the berserkers and it has a really bad secondary game. My hope is to go 2-1. 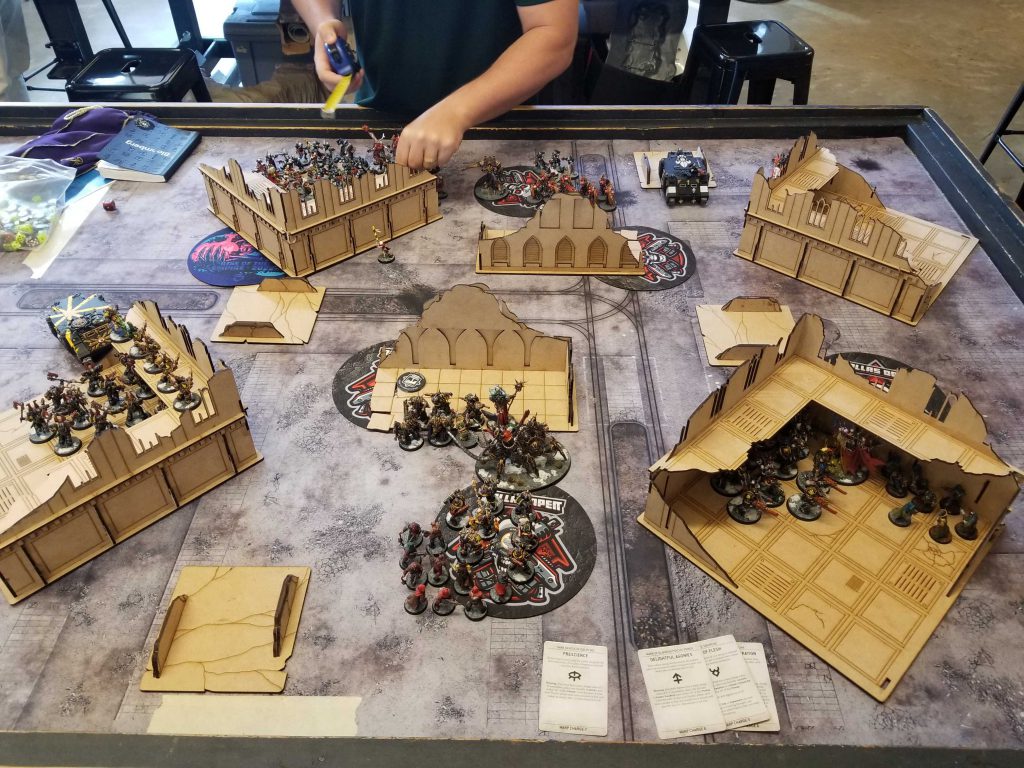 The mission here was Tide of Conviction, and Carmine’s running his tuned Bloody Rose list. I fucked up badly early on by letting myself get caught out of position on T1 and losing my Master of Possession to a Repentia charge. That never should have happened, and the extra insult to injury was that Carmine rolled a 6 to deny my Interrogate on turn 1 anyways. The game was literally over at that point, but I spent a few more turns trading badly with Carmine and losing more units than I wanted to.

Going first against Sisters is never ideal but if there’s a consolation prize (there isn’t), it’s that I held Carmine to only 84 points on the first mission. Hold 2/Hold 3 made for a low-scoring game for both of us and Carmine managed to score the miracle dice he needed to keep his deep strike charges and keep me off primary, while blanking on Interrogate (a huge mistake on my part) was a killer. 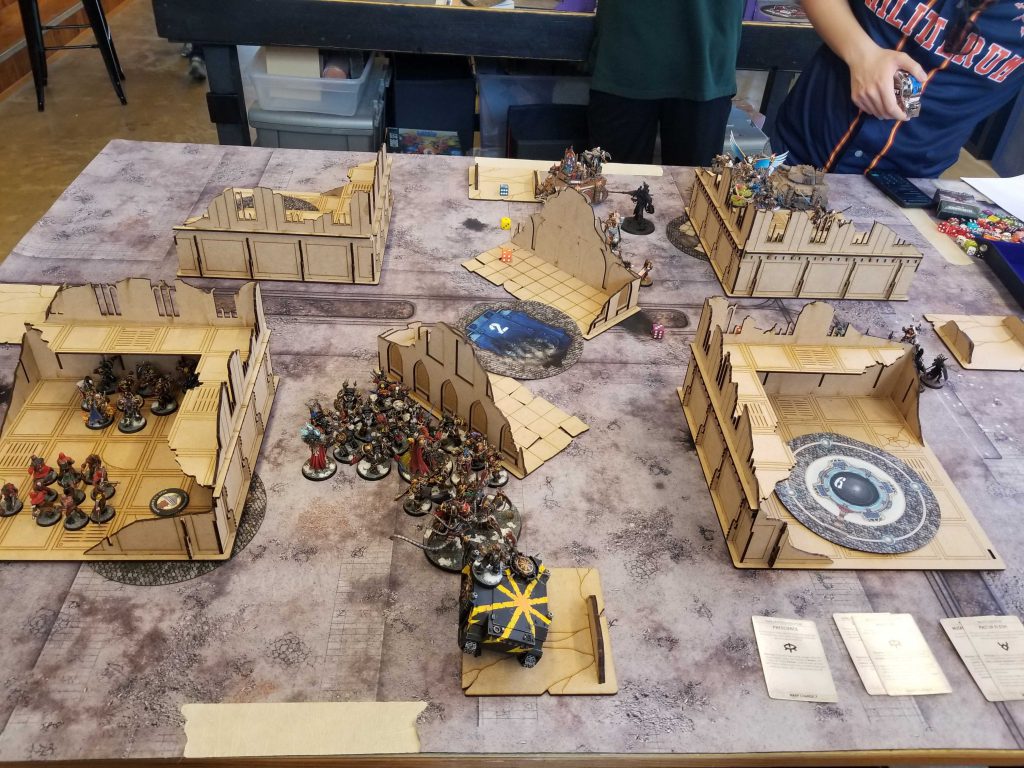 Sisters again, this time on Conversion. The upside is Thien’s running Agent Shroud, with a mix of flamers that makes his army very vulnerable. I charge him over the middle and hold that most of the game, while trading some berzerkers for a unit of Sacresants on the lower right. I take Banners, Engage, and Rise to Glory (another mistake), and end up scoring 11/13/5 on those while maxing primary.

The lowlight of this game was my Lord Discordant double-failing a 6″ charge on turn 2 and getting murdered by Retributor melta fire. Almost everything else went well, however, with the Rubrics killing a unit of Paragon Warsuits and Abaddon putting in work against Vahl and the rest of the army.

Luke’s Chaos Knights continue to be very pretty and I always love playing against him. I’ll admit, I was worried about this one coming into it, as my army does not particularly have a lot of anti-tank firepower to hurt knights. I need my Lord Discordant to pull his weight early and stay on the board… and that’s what he does when Luke messes up his combat order, allowing the Disco Lord to interrupt and kill a War Dog that was going to murder him. The resulting kill keeps him on the table, after which he heals a wound and kills another War Dog.

My biggest challenge early was just keeping models on the objectives right outside my deployment zone but Luke let me off the hook by leaving my Cultists alone when they were exposed. He’d eventually fuck me on banners a little by using the dread ability to prevent my cultists from raising more banners, but I’d manage to pull 10 on Engage and well, 15 points on Bring it Down is basically free against Chaos Knights. The final result was a relatively close win after I spent two turns trying to kill an Abominant with Abaddon and bouncing off thanks to transhuman hit rolls.

That finishes me out at 2-1 with Best Painted, which is pretty much exactly what I expected for the event. As always, Asgard events are a great time, and it’s always good to stop in and see the Astros Militarum group.

In my final Road Through 2022, I look back on the year that was and the games I played. I talk about the good, the bad, and the things I learned playing a hundred games of Warhammer 40k. See you then!