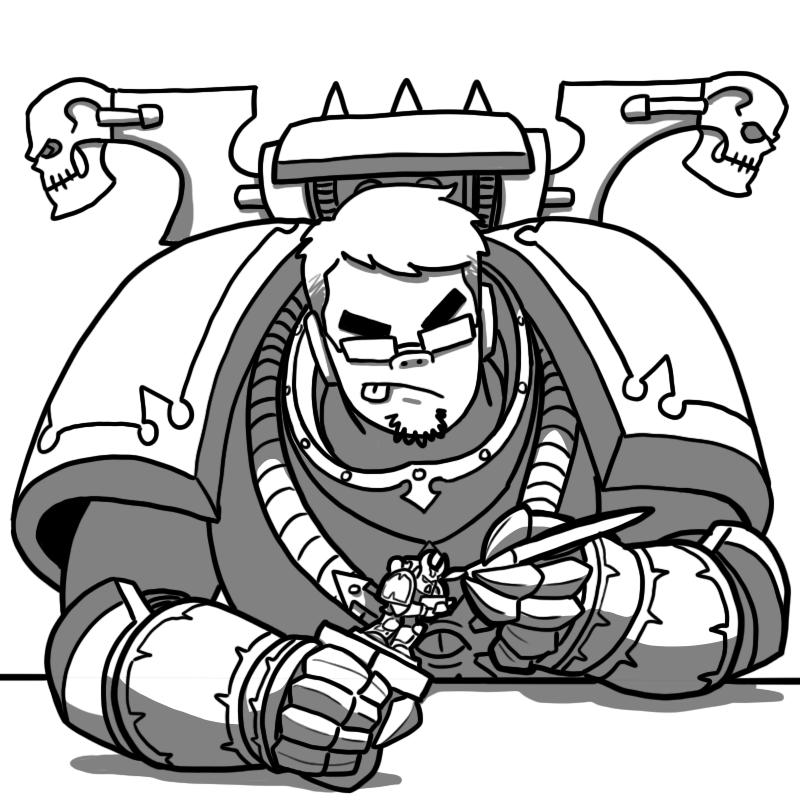 Welcome, Dear Reader, to the first in my ongoing hobby journal/tournament report series for the 2021 ITC season. Much like my fellow Goonhammer author Pendulin, now that events are back in full swing it feels like it’s a good time to start hauling my vaccinated ass up and out to them. My last event was in February 2020 shortly before we entered pandemic hellword – the Valentine’s Day Massacre. At the time I had BIG PLANS for the year, planning to get out and finally put in a full season’s worth of games. Ah, what a foolish child I was back then.

But now it’s 2021 and it’s time to get back into/onto the saddle! I’ve gotten in a fair share of games of 40k 9th edition, most of them against local friends, and I’m pretty comfortable with where I’m at from a rules and play standpoint. So, time to find some RTTs and start easing into tournament play, right? WRONG! I thought that shit too, but then GW announced their events and two of them are within driving distance of me, plus there’s the Goonhammer Open, and then Don asked me about going to the Lone Star Open and well, thinks may have gotten out of hand. Currently my schedule for the rest of 2021 looks something like this:

That’s four majors and one 50-person GT between now and the end of the year, with two that are back-to-back at the end of September. If you think that might be too much to tackle from a starting point of “zero tournaments” well, I don’t disagree with you. It’s a lot and more than likely I’m going to try and cram an RTT in there in August, provided my wife OKs me being gone one more Saturday this year. Because of the ITC’s scoring a lot of top players like to do cowardly strategies like “playing a bunch of events in the hope of doing well in a small number of them and dropping the lowest scores,” but reader I want you to know that I’m made of sterner stuff. My plan is to engage Bravery Mode and play exactly six events before the end of the year and drop zero of them.

The big upside to doing all this now is that, unlike with running Chaos Space Marines in 2019 or early 2020, I’ve painted pretty much the entire Death Guard range and I’m not lacking for the army’s high-value units. Sure, I’m a bit short on Poxwalkers and Deathshroud Terminators, but those are solvable problems. I can field pretty much any of the competitive death guard armies out there with only minimal painting, and I’ve painted enough of these green, pus-covered weirdos to have a method for painting them quickly and well down. Adding another squad or two isn’t a major issue, and for most of the army’s kits I have extra models sitting around already.

On top of that, Death Guard are still pretty good! Sure, they’re no Drukhari or Adeptus Mechanicus, but I’ve played both of those armies a few times now since their new broken books dropped and while I don’t know if I can reliably beat them with my army, I’m at least somewhat familiar with their levels of bullshit. And on top of that I’m what you might call “an incredibly average player.” My goal at these things is to hit 3-3, and at no point do I ever expect to be up 3-0 going into day 2. I’ll just be happy if I win a few games and probably ecstatic if I win the first one. I also don’t need that kind of pressure going into day two knowing I’m liable to get completely demolished by an admech player. No thanks. But at the middle and bottom tables? Yeah, Death Guard give me a fine fighting chance to maintain a solid win rate and that’s really all I’m looking for. If it turns out Thousand Sons come out later this year and they’re absolute fire I may make the switch but for now the plan is Death Guard.

The Next Event: The Lone Star Open

Next week I’m attending the Lone Star Open in Dallas, in part because it’s relatively close and in part because Don Hooson is going to be there and he’s a pretty rad dude. It’s a Major being run by FLG, and it has player-based terrain. Two of the layouts they showed in the player packet are alright; the third is a bit more dire, but I can make them work. That said, it’s pretty clear that if I end up on the third table layout I won’t have any chance of hiding Mortarion, and that’s also likely to be true on one of the other tables as well. Plus, Enriched Rounds are real (and bullshit) and traveling with Mortarion is a real chore so I’m just as happy to not bring him along. The downside is that removing Mortarion means I need to either make up the points using daemon engines – I have some bloat-drones and Myphitic Blight Haulers I can use here – or with Terminators. Right now I have eight Blightlord Terminators, with four sporting combi-bolter + axe and one with a flail, plus three deathshrouds. I also have another box of unassembled Blightlords handy. I don’t own any Volkite Contemptors though, and given that Jack “BenBooly” Hunter is only now getting a notification that the one he ordered in early June is on its way, I don’t think I’ll have time to get one, either. Really the biggest constraint here is “what can I get assembled and painted by next week?,” which is always a good sign for your list’s viability.

After some brief inventory considerations, this is what I came up with for the Lone Star Open:

This is pretty close to what I’ve played recently locally. There are a few issues with it, namely that it probably does not in fact want 10 plague marines in the troop slots and would rather have Poxwalkers there, but overall that’s the price I have to pay for only having time to paint a small number of models before I leave for the event next week – this list requires I paint 5 more blightlord Terminators plus 3 Deathshrouds, and ideally another Plagueburst Crawler, since while I have two, only one has Entropy Cannons on it. Similar to the Blightlords however, I had another PBC lying around. As I tweak this list for future events the next move is almost certainly to replace the plague marines with 2 more squads of Poxwalkers, freeing up another 130 points that basically buys me a Lord of Contagion or another Fleshmower to drop into the army, both of which are preferable to plague marines. That said, they’re not awful and they can help me score the Despoiled Ground Secondary and they can Heroically Intervene if I use the plague company stratagem, which gives them a bit more utility, plus the flails give them a bite that poxwalkers just don’t have and at 5 models they’re easier to hide. It’s not ideal, but it could be worse.

Alright, time to get painting. My big blocker on the Blightlords is that I’m limited to a set number of axes, so I’ll need to order a few more (I was also a dumbass and assembled a bunch with different heavy weapon options right before I decided I needed four more combi-bolters). Fortunately, I have two I can work with that are geared up correctly – one with axe+combi bolter and one with a flail, and if deadlines get tight I’ll break the heavy weapons off a few and give them combi-bolters instead. That seems like something I’m going to have to do at the moment, since my order of Blightlords and Deathshrouds from GW has been pending for a week now. Just stellar. The other alternative is that I can move some points around and swap two combi-bolters for reaper autocannons, which is also something I’m considering – and something I wanted to have as an option along with 2x blight launchers for future events, but it’s gonna be real rough hours if I have to sub in something for the second squad of Deathshrouds. That will be a decision I make based on when I get the “it shipped” confirmation, since the last day for list submissions is 7/16.

In the meantime, let’s focus on what’s in front of me. I primed up the blightlords I’d assembled along with the PBC. I also had a Lord of Virulence in the mix, so I primed him too. I sat down to paint them all and lay down the greens when I noticed the combi-bolter/axe blightlord was missing.

After lots of searching it turns out my four year-old had taken the model and put it on my gaming table in one of the cupholders. Ah, the joys of parenting. The good news is, I was able to find him with lots of decent priming weather left and get him primed up.

At this point my Death Guard painting method is pretty straightforward. I’ve covered it before in our How to Paint Everything series but the general gist is:

The whole thing is pretty quick, and you go from “base colors” to “completely done” very quickly. I was pretty much able to knock out my PBC the same day I started it, leaving just some terminators.

What’s Next: Frantic Painting for the Event

That’s it for my update today. I’ll follow up with a short update next week letting everyone know how I netted out on the army and the painting before I fly to Dallas, then after that it’ll be the tournament report for the Lone Star Open. In the meantime, if you have any questions or comments, or if there’s some part of the process you’d like to see, drop me a note in the comments below or email us at contact@goonhammer.com.