Tiberius Rex: Chapter Master of The Swords of Davion

I was going to leave this guy till last in my 2000pts army.

Then TheChirurgeon asked for characters for a campaign he is writing up. Totally jealous that I wouldn’t be able to take part due to being literally eleven-ty billion kilometers away I decided to paint up this guy for kicks. 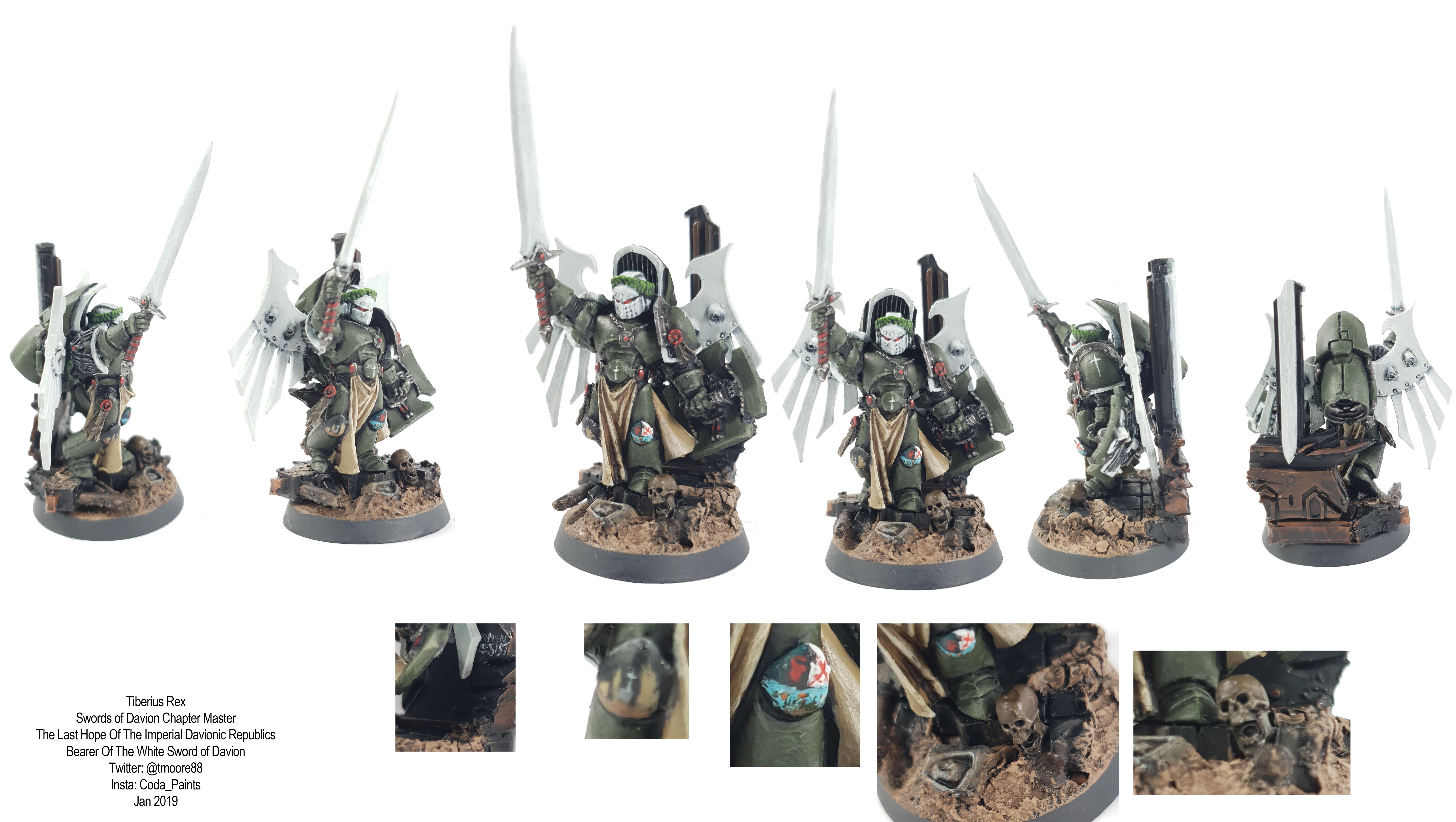 The Emperor’s Champion is my fave model of all time. That’s right. Screw your primarchs and forgeworld goodies. This is peak citadel miniature design team performance.

The model is a great mix of a marine posed effectively with a few minor sculpted details that bring the model to life. It doesn’t have massive amounts of bling, ZERO GOLD TRIM and is therefore joy to paint.

It also has a huge sword. Which is a good thing.

I didn’t want to risk finecast as it’s a risky proposition for long car trips in Australia. Luckily I still had the old version of Tiberius in the old Swords of Davion scheme based on the baller metal model. With the help of simple green, I saved the ‘old’ version of Tiberius and tried to bring him into the 2019 8th ed world.

Paint job wise I’m way happier with this dude than the warp talons I finished up before xmas and the 2nd half of my kill team who are yet to be tidied and photographed for here. I do think I could have improved on the white areas of the model and general highlighting, but other than that the model looks roughly how I pictured it in my head.

There was a minor issue with Tiberius’s rescue from the old paint job, the writing on the blade was messed up and given my history of painting in destroyed detail I decided to fill it in and keep the sword as plain as possible. On the upside this will fit nicely into the model’s background! 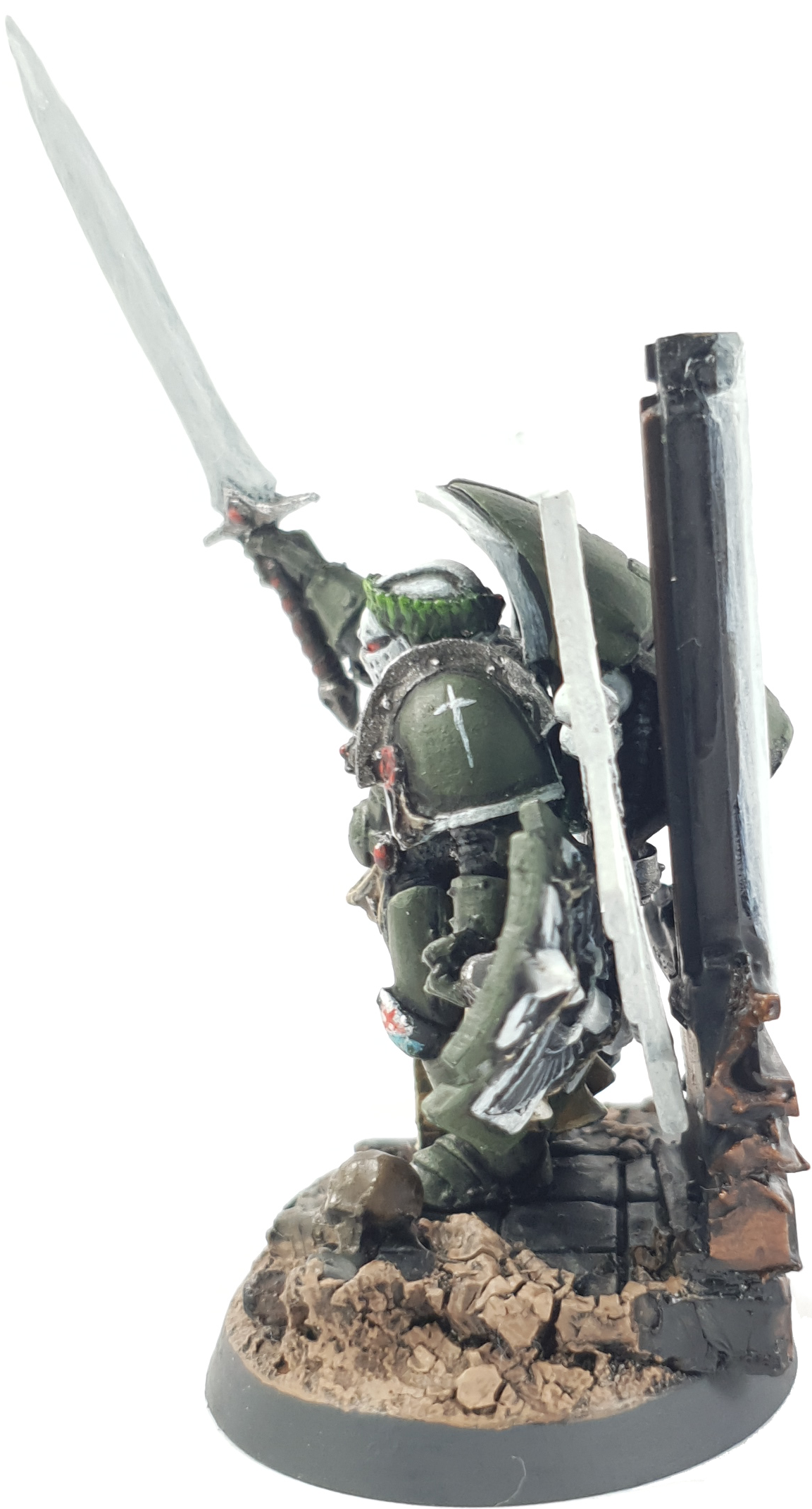 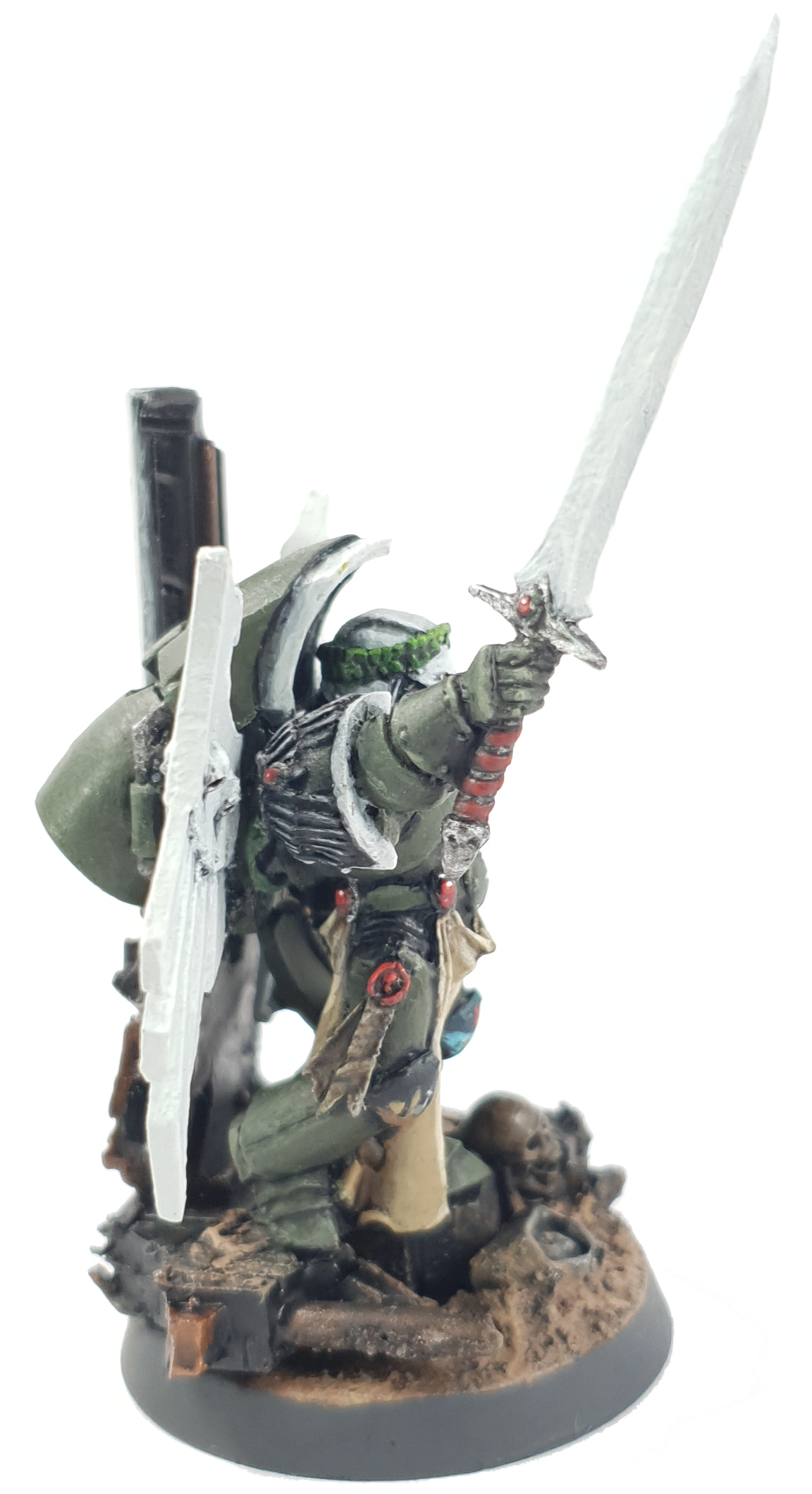 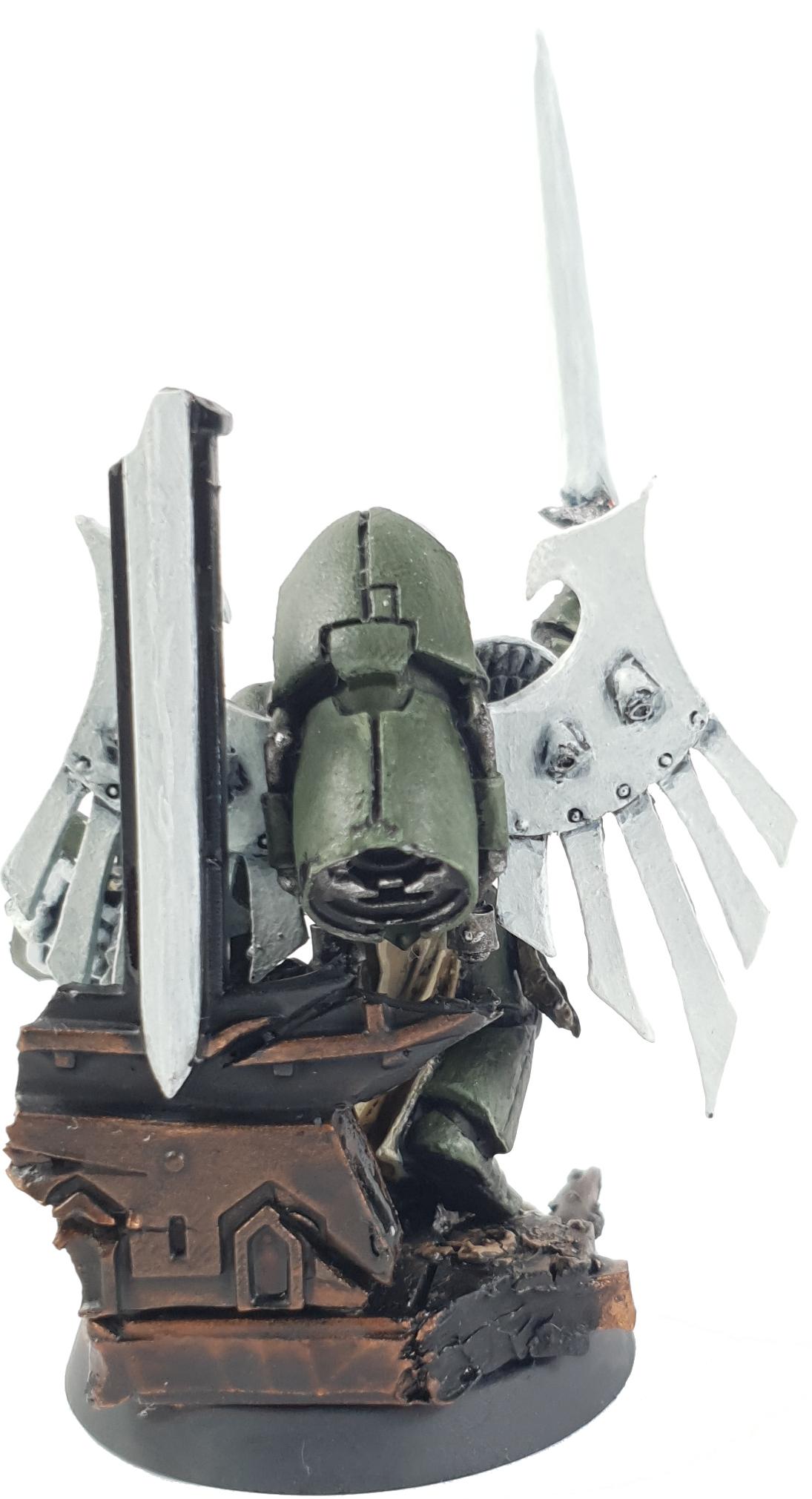 My old version of the model had a MKVII jump pack which while looking great didn’t fit with the 80ish % MKIV armour mix the current force has and I found that the MKIV pack wasn’t beefy enough to ‘sell’ the weight of a chapter master in all his glory.

In a fit of bad financial choices, I used a Raven Guard HH Dark Furies jump pack for added ‘heft’ and to tie him into general vibe that the current army has. To further this pain I’ve decided to use that pack on his 10 man bodyguard. Please send help.

The storm shield is a DA termie one from their upgrade kit. If you have any of these in good nick drop me a line on twittar so I can beg you to send me more. Ditto for BT crusader helms btw.

I used the same base bitz as the SoD Kill Team. Other than that he is pretty much the Emp’s Champ model built as is. Also there is a random plastic skull there because, well, skulls! 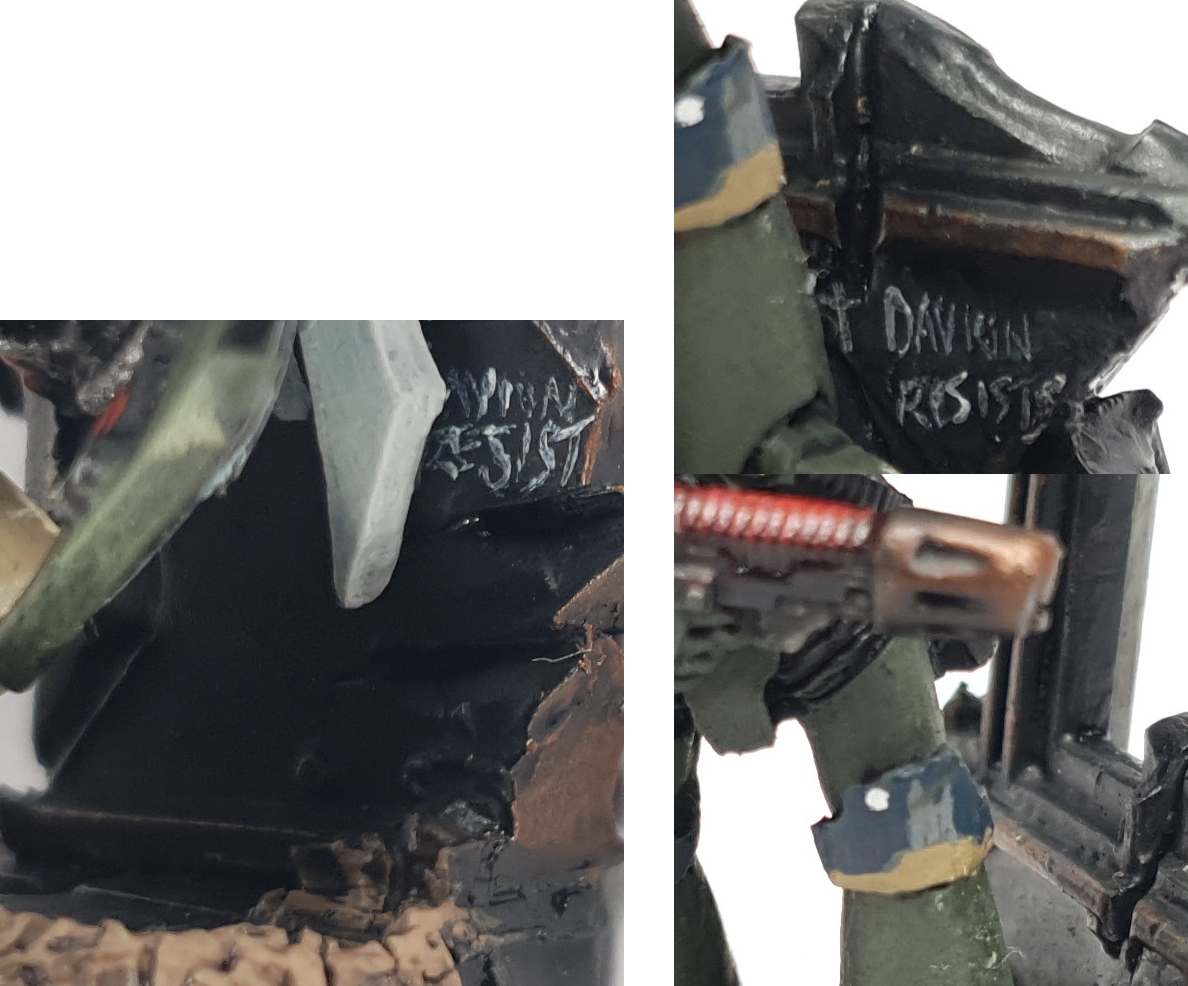 Seriously I will fight anyone who says that White Flag by Bishop Briggs isn’t the best Astartes with attitude kill team anthem.

Speaking of that SoD Kill Team, I wanted Tiberius to be the model that brings the entire army together. To this I decided to bring all the little elements of the current stuff I’ve done into one model. Here we have Sergeant Agravain‘s base and the little ‘Davion Resist’ freehand. The sword is there too for the record but the jump pack covered it up in a slight planning mistake! 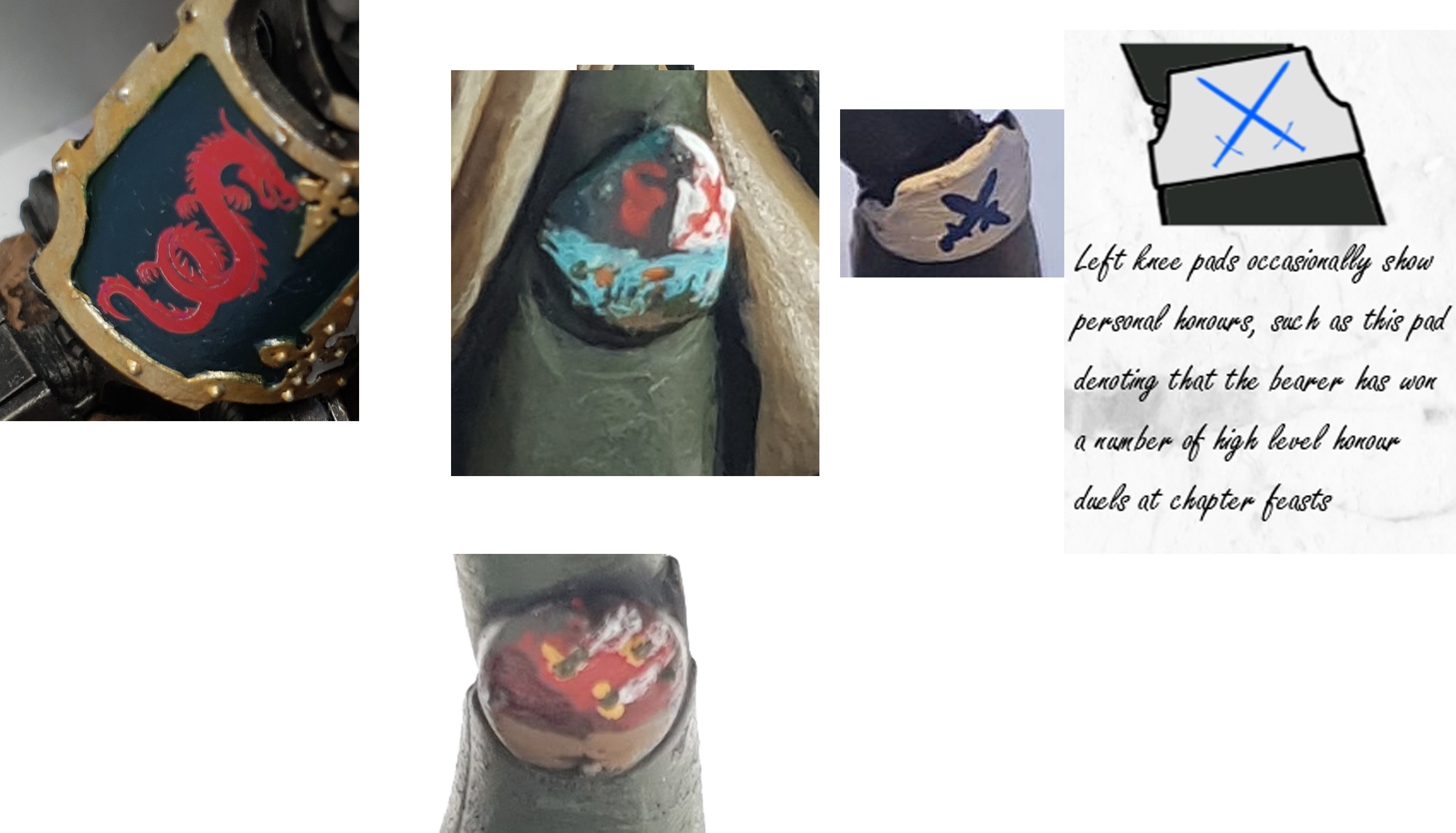 The Knight’s herdary is my next article! FORESHADOWING!

Left Knee pads on Swords of Davion Astartes are used for personal honours. Naturally a Chapter Master has a lot of them.

Top left on the pad we have the heraldry of the Knights of Davion, the Imperial Davionic Republic’s Imperial Knight house, whose respect Tiberius earnt during the Ugmarius campaign as an Assault Sergeant.

Right is cross swords of his victory at the clash of blade during the Red Dawn, a feast of Davionic nobility, where he represented Master of Sanctity. This echos a similar honour on my Vanguard Sergeant, Aurelius.

The bottom is a mural of Sword drop pods liberating Thaban from the Tau expansion that almost destroyed the chapter. This was the moment that the once exiled Captain became Chapter Master and calls back to Teilo’s similar knee. 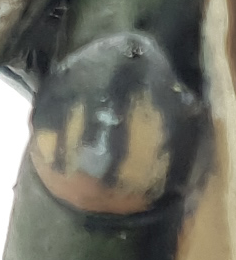 The right knee of Swords of Davion 1st company members is squad heraldry, for HQ unit’s it becomes personal. Lieutenant Ulther Vermillion ‘The Red Fox’ is a good example of this.

Rex is no exception form this. Early into his Captaincy, Tiberius unwisely railed against Chapter politics. This fact and a mistake that cost the company dearly found the 8th Company Captain faced with a choice of death or exile. Opting for the later, he took up the Black Sword of Davion and began his impossible quest.

During his exile he was tasked with 12 mighty labours, much like the current chapter exile Owain. Tiberius’s path took him to the far reaches of the imperium and back, it wasn’t until he found himself on a backwater world in the Davionic Republics that he found his salvation. A small, ruined imperial shrine with simple white sword embedded in the ground.

There is more to that tale but it will have to wait until I finish writing it!

If you like what you see here or have a question, feel free to drop me a line on the twittar or insta.

On that note, thanks for reading and have a good ‘un.

40k or is he? Painting Space Marines Swords Of Davion