Time for the Real Work: TheChirurgeon’s Road to NoVA, Part 3 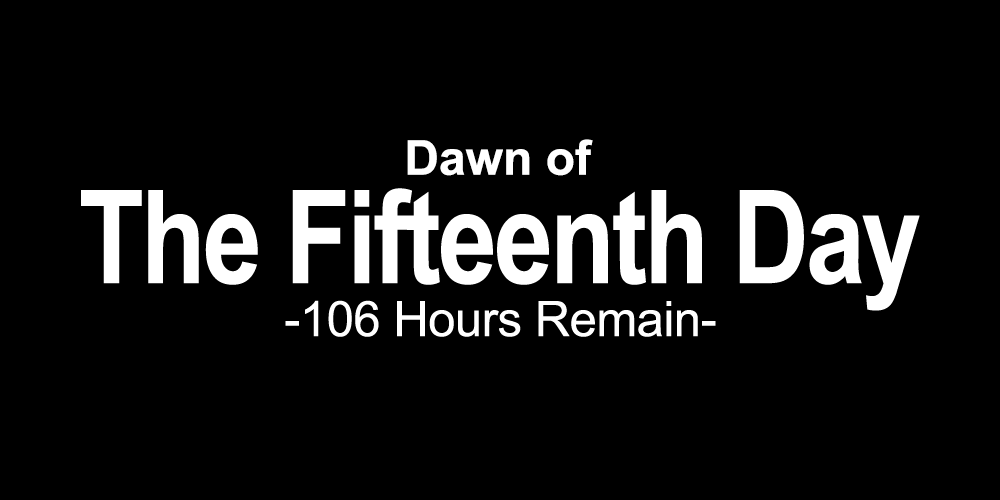 Welcome back, dear reader! When we last left off, I was anxiously beginning to chart the hours remaining I had to hobby before NoVA. I ended up with a conservative figure of about 130 hours to work with. That was two weeks ago, so let’s check on my time and progress.

Clock-wise, let’s see how much time we’ve got now that 14 days have passed…

As an aside: My favorite part about creating this insane countdown clock of hobby hours until NoVA has been watching all of my other Road to NoVA comrades flip out about their own time remaining and projects ahead of them. It was meant to be a tool for me to track and estimate how much time I’d need for everything, and to figure out how hard I’d need to go for hobby stuff, and how much extra stuff I could fit into the schedule if I had to pivot and shift the whole army to something like say, Chaos Knights. So far, it’s been good for that, and making everyone else shit their pants (especially ANAmal.net) for a minute is just an added bonus.

I should note for my Goonhammer Road to NoVA friends that if you’re working on your own road, my estimate includes about 20 days of lost time for vacations and work travel that you might not have between now and NoVA (though I’d urge you to be real with yourself about how much you’re gonna hobby–an expectation of “every single day” is pretty insane). I’ve also got a wife and a two year-old, so while there will certainly be days when I can sit down and plug away at models for 3+ hours, my two-hour-per-day estimate is based largely on the amount of time I have in the evenings between his bedtime and mine. So feel free to adjust your hours count if you want. Or sweat along with me. 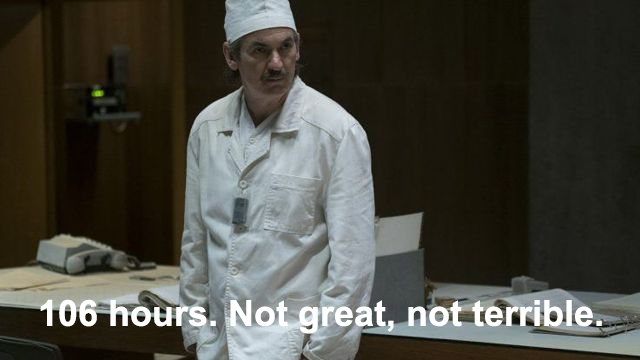 106 Hours left. That’s not great, but it’s not horrifying, either. Especially with the progress I’ve made over the last two weeks. Hey, let’s run through that progress. I’ve got more images than last time, so hopefully that will make this all just a little more bearable.

Progress on the Spiky 17

One major component of my NoVA army is the Spiky 17, a Red Corsairs detachment consisting of two HQs and three minimum-sized squads of Chaos Space Marines to get the +3 CP bonus from the Red Corsairs Legion Trait, totaling 17 models. For mine, I chose to make the HQs Huron Blackheart and a Chaos Sorcerer with Jump Pack, though he may get swapped out depending on how I end up building the army (more on that later). The missus was out of town on Friday, which gave me some extra time to sit down and polish off the last few Corsairs I had remaining. So I batch-painted up the last five. Well, mostly batch-painted. I tend to batch paint my guys most of the way, then finish them off individually. It’s less miserable that way, and gets better results. So I typically start by doing the red (two coats of Mephiston, 3 coats of progressively shaded Carroburg Crimson), followed by the Leadbelcher, Mournfang Brown, Retributor Armor, washes of Nuln Oil and Agrax Earthshade, then I do the black portions of the armor. After that I’ll go model-by-model doing Mechanicus Standard Grey edging on the black, adding rivets, and coloring the eyes. By Saturday morning, I was ready to break my guys out for a group photo. 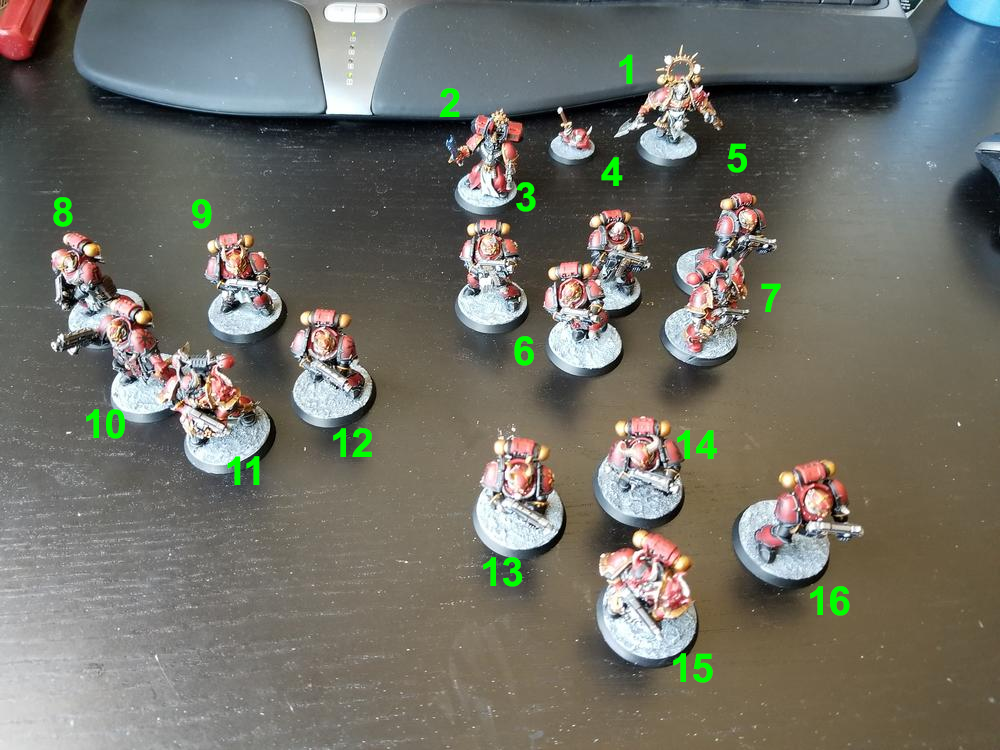 Sixteen? Where the hell is the last o– 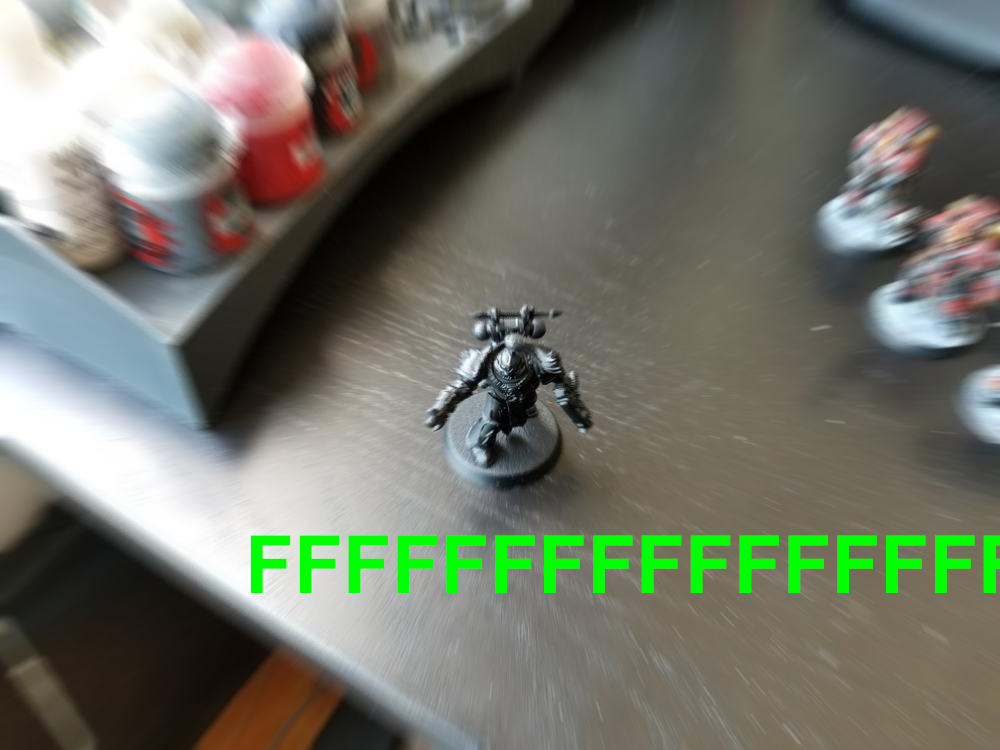 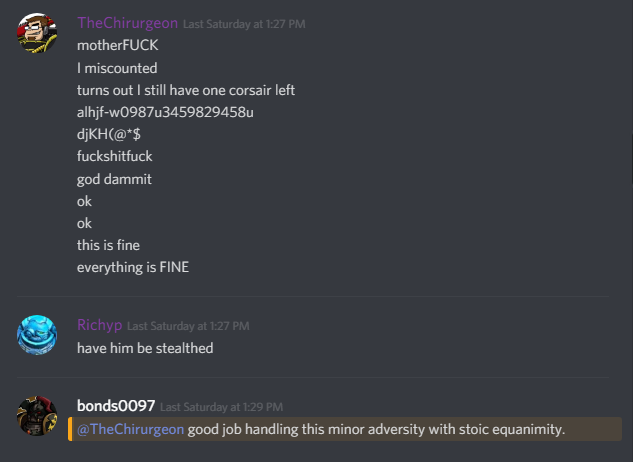 Ok. So in the end Everything Was Actually Fine. I put my mans back in their DETOLF display cabinet, re-opened my jar of Mephiston Red, and got that last squad member painted. Finally, my Spiky 17 is… DONE!

HQ Number 1 is Huron Blackheart, with his weird little familiar, Hamadrya. Huron’s just an efficient Psyker to add to a list, plus his heavy flamer and aura make him better than a regular sorcerer for the same cost. The only downside is that he’s slow, but overall I think he adds more value than any other Red Corsairs HQ. As you may recall, I made my own Huron by kitbashing a few Dark Vengeance Chosen models and adding some guitar string. I just used the standard Chaos Lord familiar for Hamadrya because I had a few sitting around. I may try and get a more legit replacement at some point. Or not. I really hate the finecast Huron. 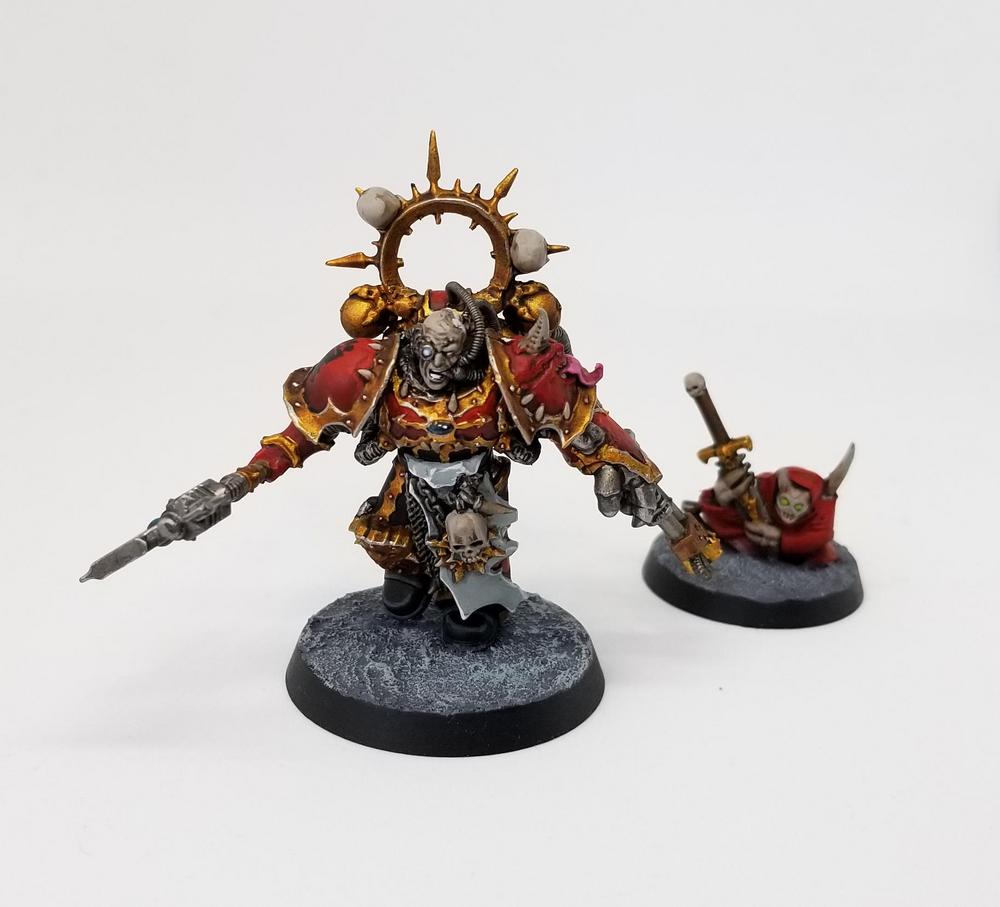 HQ number 2 is Chaos Sorcerer with Jump Pack. Sorcerers don’t have an aura, so it makes sense to put one in this detachment over say, a Warpsmith (whose value is being the cheapest useful HQ choice for Chaos Space Marines). Like the rest of my corsairs, he’s got a loyalist jump pack (it’s magnetized however, in case I want to swap him out for a cheaper, landlocked version later on). The jump pack gives him a lot more value as a mobile caster whose powers aren’t legion-locked. If you’re curious about the conversion, it’s made using Dark Angels legs with a new Chaos marine torso front greenstuffed onto a standard marine back. The jump pack is a loyalist Jump Pack. The arms are Raptor arms and he’s got a finecast sorcerer head and force sword. 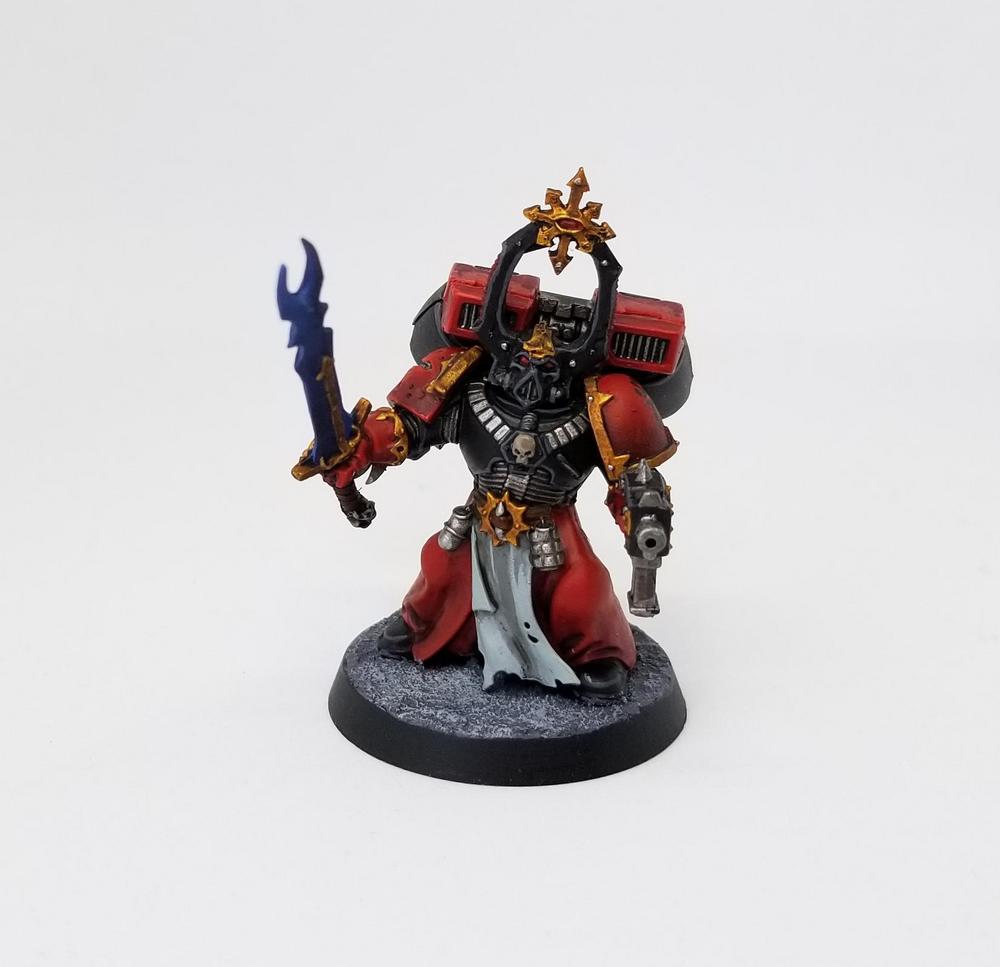 The Troops Choices are Three 5-man Chaos Space Marine Squads with Boltguns. I’m doing the bare minimum here to get those CP. They’ll also be fine objective-holders and possibly engineers if it looks like that could be a good secondaries choice for me at NoVA (it probably won’t, give that you can only score 1 VP per turn off Engineers now). The champions are Dark Vengeance Chosen, 10 of them come from the new Chaos Space Marines box, and 2 are built using a combination of Berserker Legs, old Chaos Marine bits, and new CSM heads – their legs ended up a bit weedy by comparison, but the extra height and bulk from the side pouches helps them blend in really well, I think. All of them have older Chaos marine arms and loyalist backpacks. 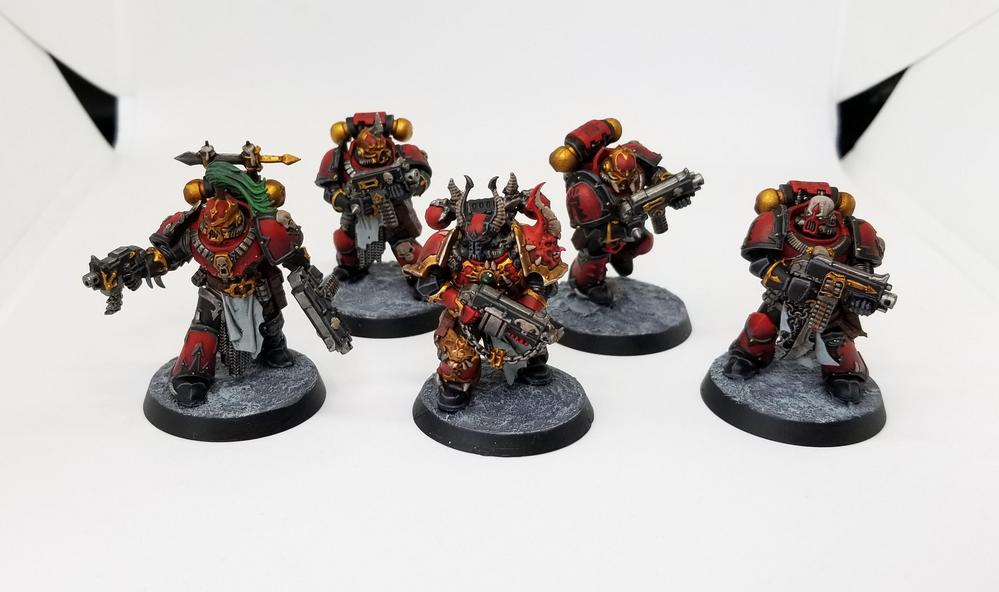 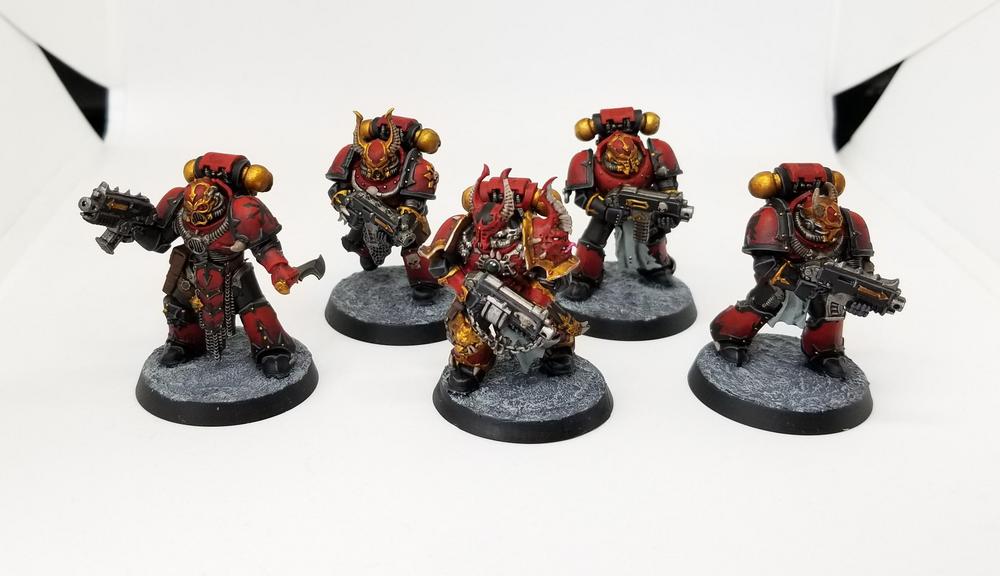 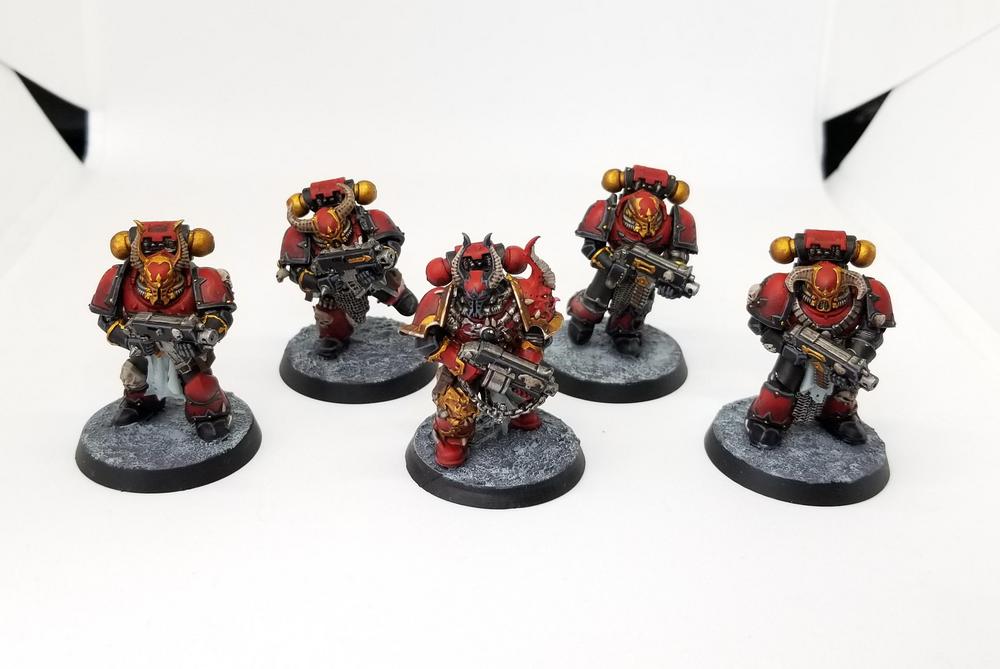 Well, I’m really glad that’s done. What about the next part? Well, going back to that whole “maybe the sorcerer will make it in, maybe he won’t” bit, you may recall from my prior post that Chaos Knights could really fuck up my plans by forcing me to change my army. The biggest shift is that if I move to Chaos Knights, I’ll have to drop the Kytan and the Supreme Command Detachment he’d slot into in favor of a Superheavy detachment with one or more knights and/or Helverins. If I do that, I’ll still want to use Council of Traitors with Abaddon, which will force a Sorcerer and Dark Apostle into my Black Legion Battalion. That means if I want to take the Lord Discordant (I do), I’d need to put him in the Red Corsairs detachment in place of the Sorcerer. That’s fine from a gaming standpoint–Red Corsair Lord Discordants are really good, because they now have the ability to advance and charge, thanks to the FAQ that gives Chaos characters legion traits. It’s bad from a hobby standpoint, because I don’t want to paint a dedicated Red Corsairs Lord Discordant.

So I’ve decided that the solution is to paint up a Black Legion Lord Discordant, but give him a red cloak and magnetize his shoulder pad (the kit comes with a Black Legion shoulder pad and a generic one), so I can easily swap that one detail out to visually change him to the correct legion. I think this will work pretty well!

So I’m currently working on him. It’s not an easy model to build by any means, but not nearly as bad as I’d been led to believe. The monster went together pretty well, and while assembling him, I decided i wanted to try magnetizing him to the Helstalker if I could, because A) it’s a really tall, difficult-to-transport model with the Warpsmith still on top, and B) it seemed like yet another one of life’s many problems that can be solved by shoving a magnet into a butthole. Wait. 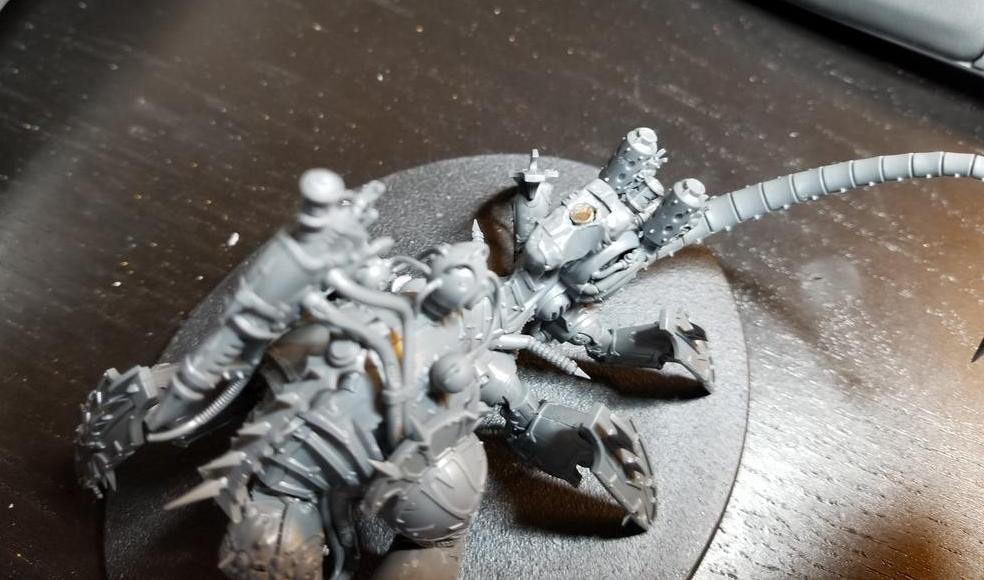 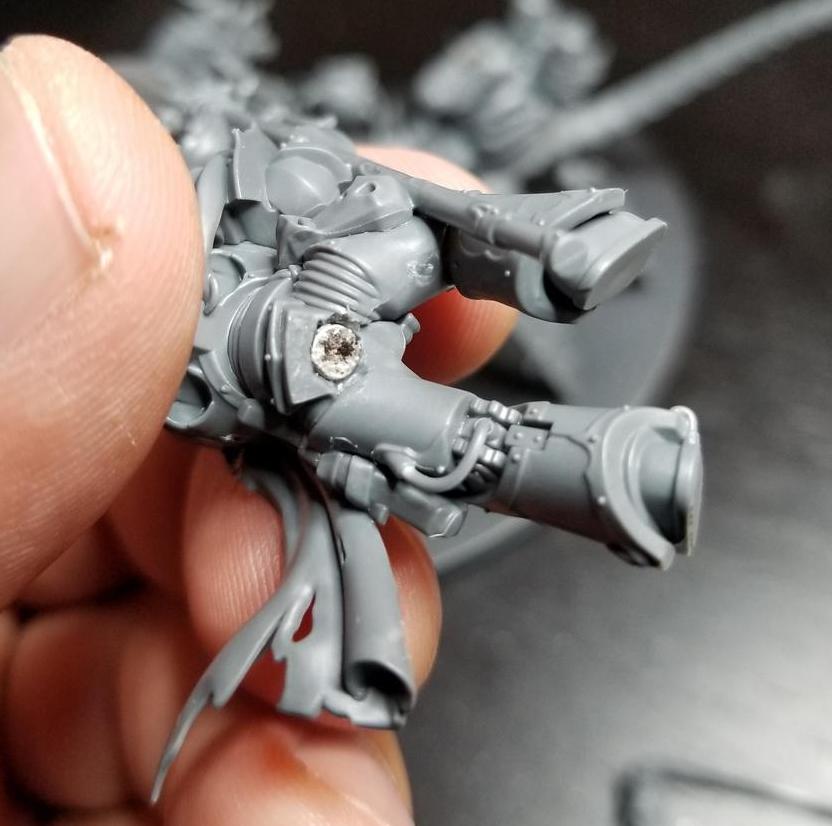 Butt magnet was a mixed success. On the one hand, the magnets fit and it absolutely worked as a way to hold him in place: 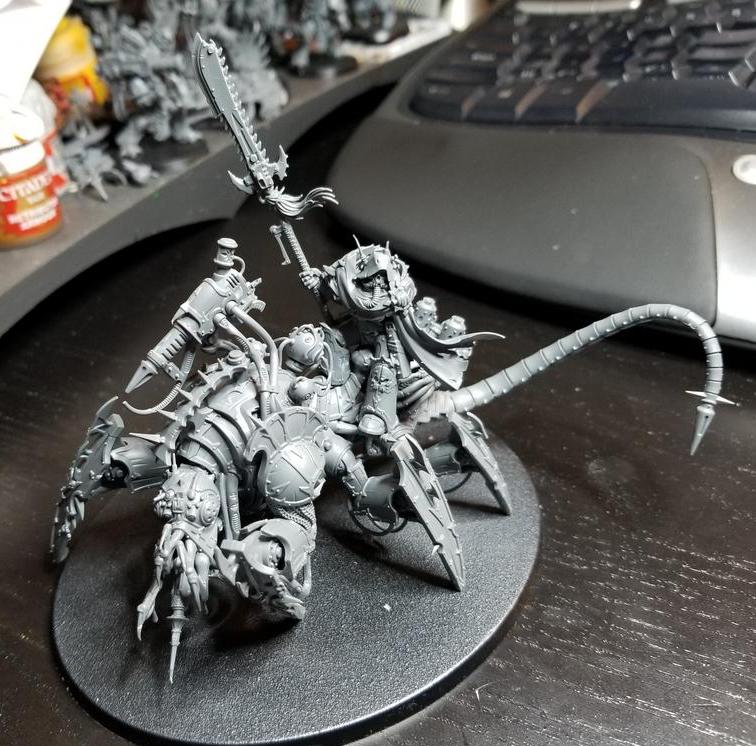 On the other hand, I quickly realized that his other arm is holding reins that latch to either side of the Helstalker. A pain in the ass, but not a dealbreaker. The problem is that he also has a Doctor Octopus-like tentacle arm that attaches from his back to the gun, and that one is quite a bit more of a pain in the ass. So I uh, I may have drilled a butthole on my Lord DIscordant and shoved a magnet up there for no good reason. Cool.

The upside is that my plan to magnetize the shoulder pad definitely worked out. After some excellent advice from fellow Goonhammer author Alfredo, I decided to widen and deepen the arm hole on the Lord Discordant’s left arm to fit two magnets (rather than drill a magnet into the shoulder pad itself, which were too thin to do this well). Then I used a spot of green stuff on the shoulder pads to create a groove for the magnets to fit. The end result is an easy-to-swap-out pair of shoulder pads. So that worked. 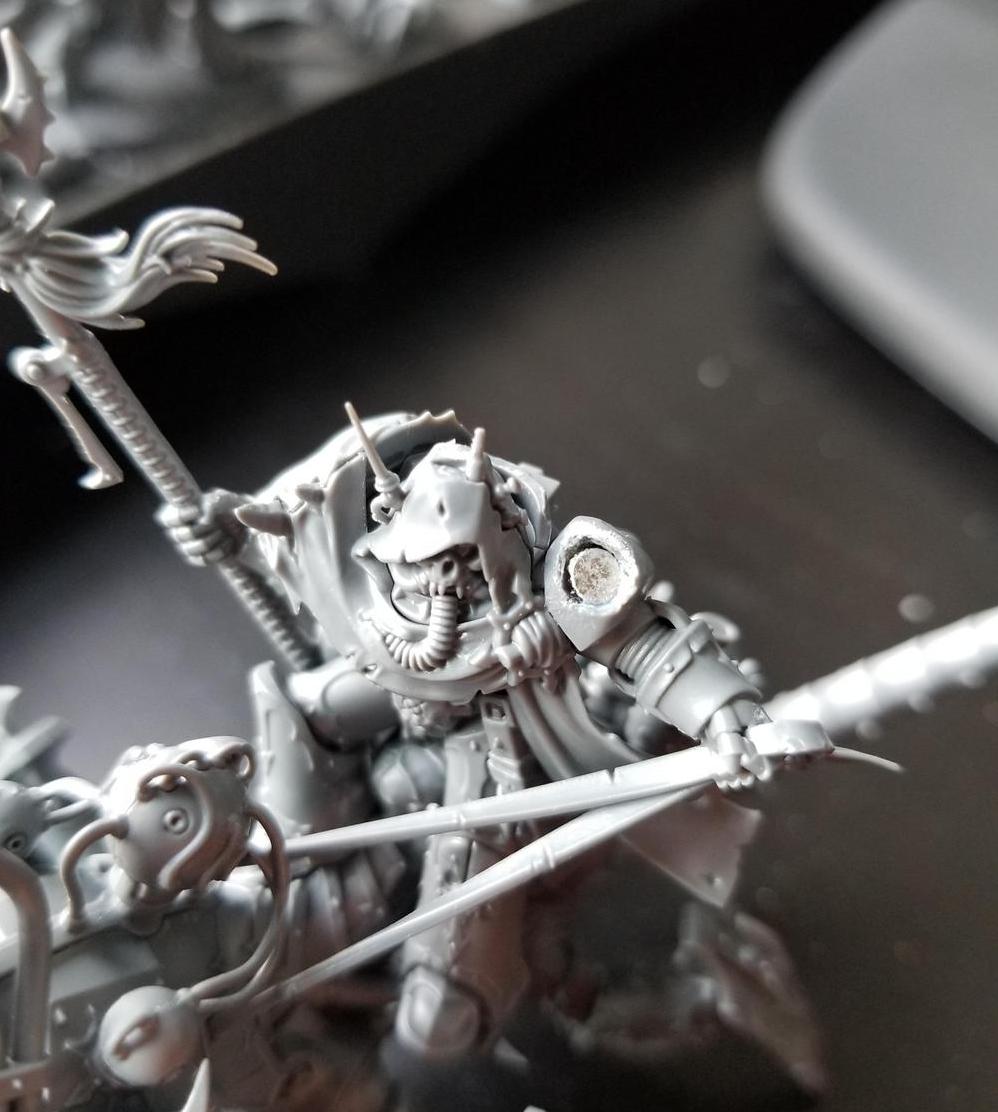 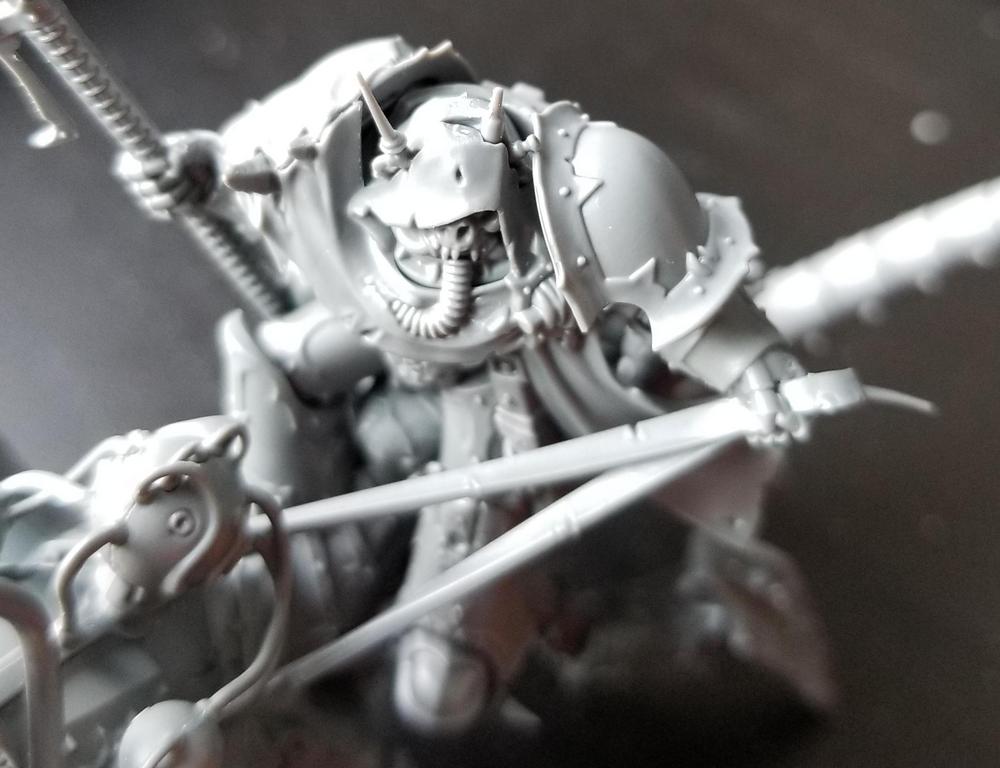 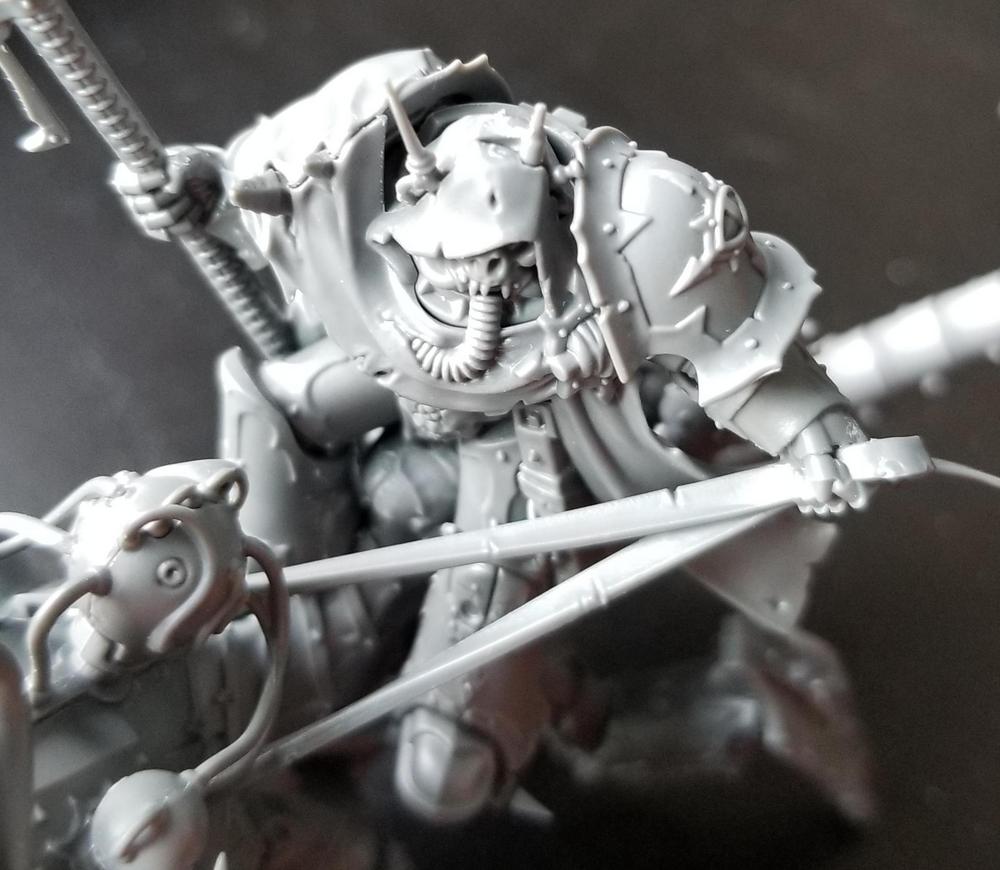 If it seems like this entry was heavy on hobby progress and light on list-building and tournament theory well, that’s because it was. I can only do so much around lists right now anyways and the long and short of it is I’m really only considering two lists and trying to keep things flexible until I make a final decision. On that note, while I work on the Lord Discordant, I’ll also be working on the other HQ that shows up in all of my army plans… 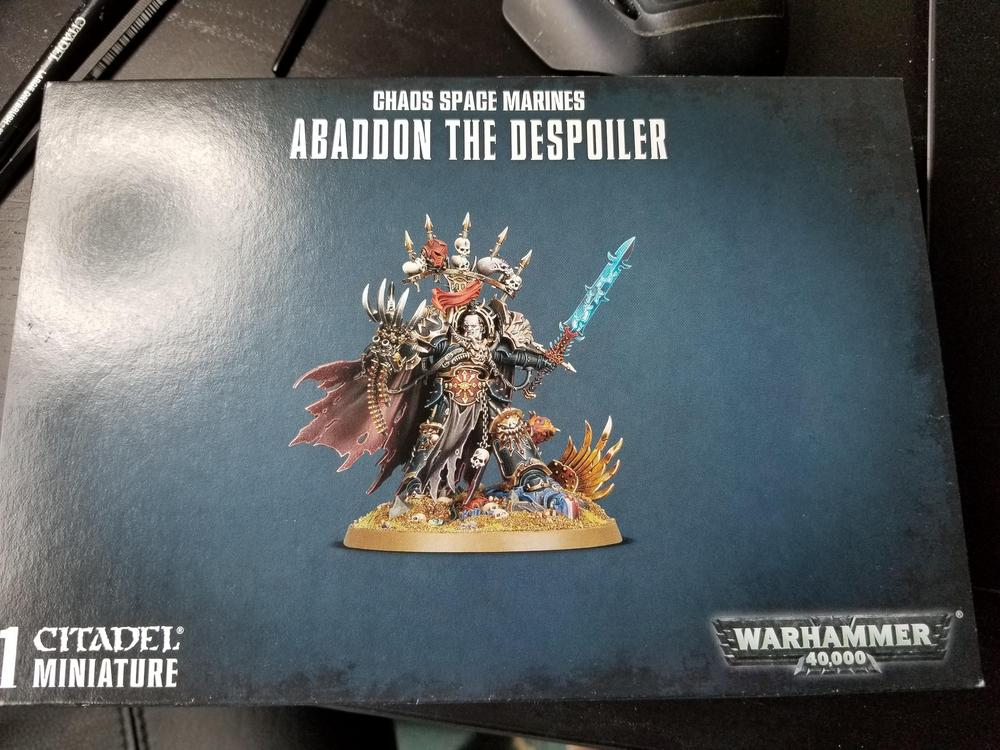 I’ve budgeted 40 hours for that fucker in terms of assembly and paint time, so get HYPE. Unlike the Red Corsairs, Abaddon and the Lord Discordant have to have For Reals paintjobs on them, so he gets more time devoted. I also have a bucket of cultists to paint, plus a Dark Apostle, so they’ll get painted over the next two weeks as well. It seems unlikely I’ll have a ton of progress by next week, so expect another one of these updates in two weeks, i.e. when about 80 hours are left.