To All the Armies We’ve Loved Before 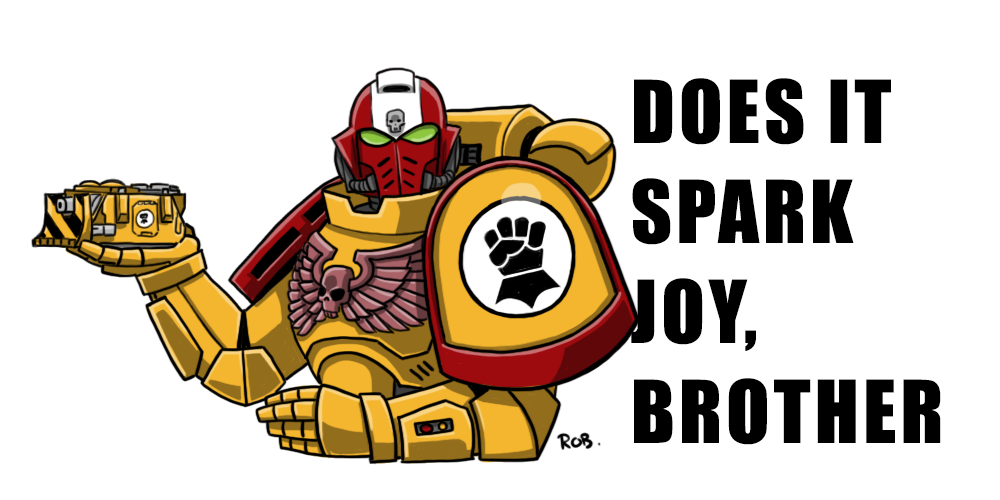 There are some Warhammer 40,000 players that have been collecting lovingly since they were first introduced to the game as children. Whenever those players bring out the armies they painted when they were kids it always warms my heart. I, however, am not one of those players. I’m one of the players who was introduced to the game rather late (High School for me) and haven’t ever held on to a single army for longer than a few years at most. That’s not to mean I don’t put effort and love into my models – I do! Once I got serious about Warhammer 40,000 at the tail end of 7th edition, I’ve painstakingly cleaned mold lines, painted models to the absolute best of my ability and based them with care. But in the end, to the trade sites they go as I set my eyes upon new horizons and repeat the cycle over again.

So, come and take a walk down memory lane with me, dear reader, and let us revisit the armies I’ve loved, let go and, perhaps most importantly, why I let them go.

This faction is what drew me back into Warhammer 40,000 after my break from 5th. I’d always loved the lore and John Blanche artwork of the AdMech, but seeing the faction in model format was an instant hook for me. Here are a few of the units I painted for the army at the tail end of 7th edition.

Why I loved them: Adeptus Mechanicus were unlike any faction I had played before. Awesome units that replace their body parts with robotic ones in praise of the Omnissiah. Another aspect of the army I enjoyed was how tragic they were. Tech-Priests are the only real units that obtain anything useful out of the cult, with units like Skitarii allowing their bodies to taken over in what they view as the power of the Machine God passing through them, but was really just the Tech-Priests using the tools implanted in them. On the table top, my favorite aspect of Ad Mech was how futuristic and on the cutting edge they felt. Invulnerable saves that would sometimes flare up and could cause units to reduce their initiative (remember initiative?) to 1 as they fought off the effects of the blinding lights. Sicarian Infiltrators were very cool to me because of the Neuro-scramblers their helmets emitted. The entire army operated in a way that I felt was a unique one on the table top.

Why I let them go: I let my Adeptus Mechanius army go a few months after the 8th edition Adeptus Mechanicus codex came out. I wasn’t a huge fan of how they operated in 8th edition – they didn’t quite feel the same in a technological sense and it took my enthusiasm for the army away. That being said, I definitely regret selling them. Games Workshop has done a great job of really expanding the range and making them more competitive. If I had just held onto them for another year I probably would have had way more fun with them.

When 8th edition dropped I rushed to the store to pick up my copy of Dark Imperium. I was very excited about the new range of Space Marines models (I’m still a huge fan of them) and was having a hard time picking a chapter. My local GW manager recommended Howling Griffons because you rarely see them on the table top – so I went with them!

Why I loved them: Man, just look at that scheme. how can you not love the Howling Griffons? They’re very striking on the table top. Their background is pretty cool too. The art of their fortress-monastery is very cool.

Why I let them go: Man, just look at that scheme. Painting a quartered army of red and yellow over black primer with a brush is not fun. They just ended up being more work than they were worth to me. I would definitely try painting them again because I have an airbrush now which i think would make it much easier.

I started both of these armies right around the same time. I was drawn to Eldar because I’ve always loved how colorful they were. Adeptus Custodes seemed fun to play and I was really impressed with the jetbikes.

Why I abandoned them: I had never actually played games with them prior to building & painting some of them and found they weren’t really to my liking. I really enjoyed painting them though, and I was glad to find a buyer that put them to good use.

What I loved about them: Ultramarines are my favorite Space Marine chapter. I know they get a lot of flak for being the poster boys, but they’re a very cool chapter with some interesting historical influences – Greek & Roman chiefly, but I’ve always found a little bit of Napoleonic French in them as well. I had never painted a blue army prior to these so I wanted to push myself in trying a new color. They were fun on the table top and I enjoyed the synergy between units. Plus, Guilliman was just an absolute monster against opponents. My favorite thing about this army was Guilliman’s sword. I think it’s one of the best weapons I’ve done so far.

Why I let them go: This is an army that grew too fast for me to keep pace with. When the Shadowspear box came out I ended up picking up the Space Marine half. Then at a local shop I picked up Betrayal at Calth and The Burning at Prospero. I burned myself out on painting Ultramarines and the sea of plastic grew to be too much. This was an army I didn’t really mind letting go of. They were fun while I had them and challenged me as a painter, but I was glad to see them go.

I had the Death Guard half of my Dark Imperium box sitting in my closet for a while before deciding to paint them. I had never really been interested in Chaos Space Marines as I was a staunch loyalist. However, in chatting with the Goonhammer crew and reading up on the Death Guard during the Horus Heresy I grew to like them, especially Mortarion. 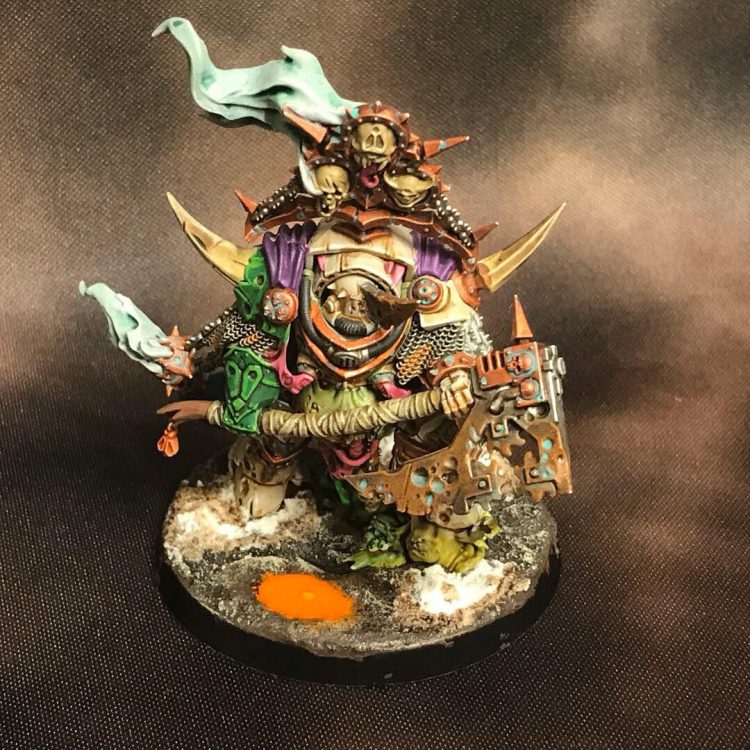 Why I loved them: Painting Death Guard is the most fun I’ve ever had while doing this hobby. Being filthy is the best. On the table top, Death Guard are a tough army to crack with a lot of synergy between units. As you can see, I put a lot of time and care into these guys.

Why I let them go: I got really burned out on painting them. As you can see, Death Guard have a lot of detail on them and I really embraced that. I realized it was taking me a long time to just do a couple units and slowly came to the conclusion I wasn’t going to paint the rest of them. Instead of letting them go to waste, I decided to let them go to someone that would enjoy them.

Although I consider myself more of a narrative player than a competitive one, I did dip my toes into the sand of the competitive side with Imperial Knights. There are really only 3 models that mattered in this army:

Why I loved them: This was one of the first armies where I really went with a theme and made it my own. I had just gotten back from a trip to Paris and was feeling like a bit of a Francophile, so I had the idea of a Knight Household that was the remnants of other Knight households that were permanently on crusade. These were a ton of fun to paint and I very much loved them.

Why I let them go: Knights are cool, but I’m not a competitive player and didn’t have much fun playing with them. I ended up selling them off at the height of the Imperial Knights + loyal 32 era. I love painting Knights though and might just paint some in the future for fun.

Eyes on the Horizon

I currently have two armies I’m working on. First is my Necrons. I’ve always loved the Nihilakh Dynasty and since my local club was doing an escalation league, I decided a great deal on a Necron! Start Collecting set was too good to pass up and joined in. (If you like how these look, check out the HTPE: Necrons article!) The second army I’m starting is a T’au Vior’la force. I’ve always wanted to play T’au ever since 5th edition. Here are some sneak peaks at what I’m working on.

If you want to see more, don’t worry! I plan on doing an army feature of both armies once I complete them right here on Goonhammer!

Provided I don’t sell them first.

I have acquired quite a reputation for selling armies, my friends all laugh and offer to be the first bidder whenever they see I’ve bought a new one. But personally I feel like it’s a perfectly valid way to hobby. I really enjoy painting a whole army to a specific theme, a lot more than painting single miniatures.

Since I got back into the hobby 5 years ago I have painted full armies for: Imperial Fists, Sylvaneth, Harlequins, Idoneth Deepkin, Eldar, Sisters of Battle, Custodes and Ossiarch Bonereapers.

However, they inevitably end up getting sold for the following reasons.

I’m lucky enough to own a gorgeous 18th century cottage in the countryside. It is idyllic but was not built with Ham storage in mind. I only have room for 4-5 armies and even then I’m cramming them into cases rather than having them on display.

I am lucky enough to have a fair amount of disposable income. But even then I don’t have the sort of cash to throw £600 at a new army every couple of months so selling old projects tends to fund new ones. When I first started painting they’d go for a fraction of the retail value, but as my painting ability has improved I’m now regularly selling them for a decent profit and my wife never minds me placing massive orders because she knows the money has come from the hobby itself.

I’m not going to win a Golden Demon (I have got through to the finals but I’m a long way off those that do win). I do, however, often get best army nominations and am regularly in contention to win so this is where I focus my hobby goals. My plan for an army is simple – paint it up, take it to some tournaments and try and win best army. If you don’t win, the only real way to improve is to paint another one!

I really enjoy painting 2000 point armies. Once I’ve finished painting I generally move on to a new project. I then have zero motivation to go back to my old scheme, I’m far more interested in painting the exciting new thing I’m working on!

So, in the end whilst selling armies can be the sign of a hobby butterfly to some, I see it as a good way to keep me hobbying and painting whatever I fancy!

That’s our takes on selling on armies – what about you? Are you the kind of person who holds on to every model they’ve ever bought (you might call this “The Corrode”), or do you like a fast turnover of new projects? Let us know in the comments, on Facebook, or e-mail us at contact@goonhammer.com!