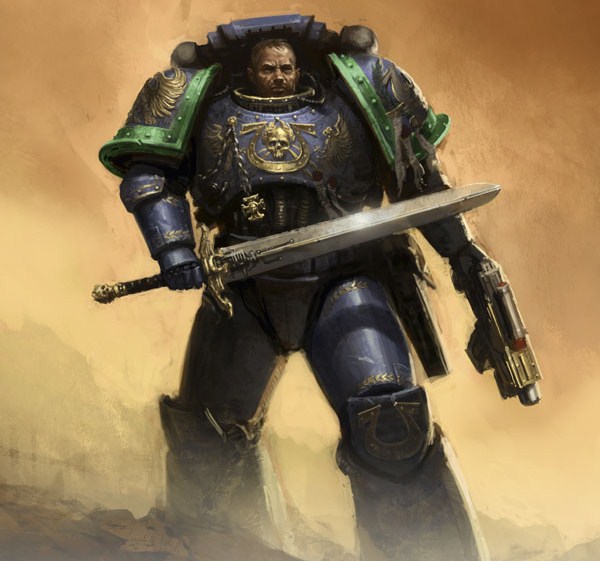 When I decided to join the Tale of Goony Gamers, I had decided to build a Custodes/AdMech army (see previous post here). Needless to say, we are nearing the end of Month 2 and I have done nothing save for a single Custodes. However, between then and now, I agreed to join a couple other Goons in the 40k Team Tournament at Adepticon in March, as Team Ultramarines. And so here we are.

As is the case for many others, Space Marines are what drew me in to 40k. My first foray into painting an army were Crimson Fists, because as bears repeating, we all seek to be represented in our hobbies and Crimson Fists are the Mexican Space Marines. However, this project quickly lost steam for two reasons: a) Space Marines are pretty weak right now and b) Crimson Fists eschew almost all of the codex heraldry and that ultimately made painting them less interesting to me. I moved on to Eldar but for months now I’ve had the nagging urge to go back to Dark Imperium and build an Ultramarines army. Despite a), Ultras can be decent on the tabletop (particularly if bolstered by expensive resin from our friends at ForgeWorld) and more importantly, I can do all the codex-based heraldry I want (white veteran heads, squad markings, company markings, etc.). So when the opportunity arose for a concrete project centered around Ultras, I jumped at the chance and here we are.

The concept is pretty simple, I’m going to be building out portions of Ultramarines 4th Company (led by a haggard Captain Uriel Ventris) fighting during the Plague Wars as part of the Spear of Espandor campaign. Per Dark Imperium, it is Ventris that personally warns Guilliman of Mortarion’s incursion into the Realm of Ultramar and the 4th Company fight alongside the Primarch in retaking it. I chose this because it gives me lots of narrative hooks for expanding my army (Custodes allies, Guilliman, Ultramar Auxiliaries, SoB), I am currently reading Plague Wars, and it provides me with some painting opportunities I’d like to explore.

To start, I really like the look of the green trim with the ultras blue armor. Beyond that, by setting my army during the Plague Wars, I can start to practice weathering techniques and give my Marines a more beaten up and grimy look than you typically see for the smurfs. Weathering and battle damage are not things I typically do, as it is quite scary to take a basically finishes model and then purposely fuck it up, so this is a great way to push me out of my comfort zone and add some new techniques and tools to my repertoire. So throughout the army, I will be incorporating mud, rust, paint chipping and maybe some more advanced battle damage (inspire by Skail’s fantastic work) as time wears on.

So what will the army actually look like on the tabletop? I am not quite sure yet. The plan is to build this for Adepticon and in particular two or three event.

This was the primary driver for this project and I am extremely excited to get to do this with a pair of cool goons. The event requires each member of the team (there are four of us total) to field a 1000 pt detachment. These were the options last year:

With Chapter Approved on the horizon, we won’t collectively agree on our lists and who is fielding what until likely end of December. So as of right now, I don’t know what my list will look like.

The reason I decided to attend Adepticon in the first place was the Adepticast 2017 and 2018. The bois got me really excited for the event and in particular the Gentlemen’s tourney, which has now become the Gallant GT. It seems like a very fun semi-competitive event for people who play the game like I do. The requirements for that are two 75 PL lists, and you can choose which to field on any given game. So that’s potentially quite a few models and we will see how feasible it is for me to paint up 2K or so points between now and Adepticon. Regardless, any list I build will take into account what I’m building for the Team Tournament.

Another Adepticast featured event, I definitely want to participate in this one. This is a 1500 point event, single detachment. So I know I will field a batallion and the rest will be based on my Team Tournament list.

So all that said, my list is still very much in flux but I am confident that I want at least the following:

This will be my core and from here I can decide how to expand. I’m leaning heavily towards a relic Leviathan Dread because it is both a cool and good model, as well as Aggressors because they are awesome. But we’ll see what Chapter Approved and the Vigilus Weekender bring, I’d love an excuse to build my redemptors. All that said, since I will be flying to Chicago with my army, I will likely favor fewer, more expensive models (like dreads), to make transport easier.

So, first step of building any army is the test model. And here we have Sergeant Iocastus of the 2nd Squad, 4th Company leading his Marines into battle. This was a good opportunity to test out a lot of the aesthetic cues from the army and overall I’m quite happy with how he turned out. Really, the only thing that didn’t quite work is the sword OSL, but I think I learned some things I can carry forward for future models (at least 4 more power swords to do). So here’s the breakdown:

I want to balance quality and efficiency here so I am making two changes to how I usually build and paint.

I primed Iocastus with Stylenrez Black Primer. I then basecoated the head and body separately. For the head I did a simple two-part zenithal with Scale75 Deep Red and Scale75 Antares Red. The goal was to have good contrast and saturated but not overly bright red. For the body I did a three-stage zenithal using the Reaper Ultramarine Blues triad. I’ve used it before and really like the vibrant blue it creates with some nice purple tones in the shadows. While I did a standard zenithal for Iocastus, and will do so for all line troops, characters will get a more targeted airbrush stage with manual placement of shadows and highlights.

I also airbrushed the power sword. It has like three billion layers of paint as I struggled to find an approach I liked but ultimately settled on a simple reverse gradient using Scale75 Black Metal, Heavy Metal and Speed Metal. This was then covered by Tamiya Clear Blue to get that nice bright blue metallic effect.

The rest of my basecoating was done by hand:

I applied the Sergeant Kneepad decal on the white painted knee as well as the tactical arrow and squad marking on the right shoulderpad. Micro Sol and Micro Set are instrumental for the curved surfaces. After this, I re-gloss coated.

I like washes. For the armor, I wanted something very dark for good contrast but with griminess to it, so I settled on Secret Weapon Miniatures Armor Wash. This is a great color with some green tones in it that provide a dirty look. The green will also provide additional contrast on the red helmet. The wash was applied as a pin wash, with some extra pledge floor wax to add in flow, across all of the armor as well as an overall wash on the metal and leather. Then:

After the washes were dry, I applied a Matte Coat, again with Vallejo Mecha Color Matte Varnish.

The main armor got a three stage highlight using VMC Andrea Blue on all edges, Deep Sky Blue for top facing or compound edges and then dotted Blue Grey Pale for anything pointy.

The helmet got a two stage highlight of VMC Orange Red and Light Orange.

The shoulder trim got a two stage highlight of VMC Light Green and Lime Green.

At this point I matte coated again and then prepared to ruin my model.

For weathering I went for a sponge chipping approach using a very fine-grain make-up sponge to get the right scale (I still need to experiment with other scales though) and did three stages. For the decals, I did some chipping with the underlying armor color to get a worn effect on the markings. I then did targeted weathering with VMC Dark Sea Grey for a light grey to create contrast and then VMC Dark Grey (could maybe have gone dark for greater contrast). The idea is that paint has scraped or sloughed off to reveal the dull grey ceramite underneath. I focused on areas I thought would see a lot of wear, feet, knees, elbows, hands, shoulder pads, some of the chest armor plates and the helmet. As I get comfortable, I hope to get more adventurous and do some more advanced stuff like impact craters and the like.

After weathering, I based the model with Vallejo Mud Texture and made sure to get some on the legs of the model. Then there was additional weathering with Vallejo Natural Umber pigments (applied thinned with fixer to make a paste and dry for a dusty effect) on the legs as well as a combination of Nurgle’s Rot and VGC Vomit.

One more coat of matte varnish.

The last stage was to brush varnish certain surfaces such as satin for all the gold to restore some shine, gloss for the sword and all the lenses. Then lenses were painted with Waystone Green or Tamiya Clear orange and gloss coated again to finish things off.

Well, I need to catch up, so here are the plans to get me hopefully caught up to Month 2 by mid-December: