Tom Clancy’s Ghost Recon Breakpoint: You Could Bend It Instead, or Just Leave It Be Entirely

Tom Clancy’s Ghost Recon Breakpoint didn’t get a review in this space when it came out both because its release slightly predated this feature’s expansion into the wider world of video games from Games Workshop-branded content and because, well, upon first catching it, it was fairest to throw the game back. Breakpoint’s launch was plagued by bugs, dropped connections, and just empty and unrewarding gameplay. We put it on pause, waited for a while (long enough for a massive sale in the UPLAY store), and have come back to it almost a year later, after a long schedule of post-launch updates, bug fixes, and content add-ons. And now, in Breakpoint’s final form, two and a half of those things have been fixed! The gameplay is no longer entirely unrewarding; it only suffers by comparison.

A number of reviews in this space have focused on open-world games, running the gamut from dependable and comfortable (Mad Max) to solidly designed, well-executed visions (Watch Dogs 2; Ghosts of Tsushima) to legitimately one of the best games of its generation and cultural moment (The Witcher 3). It’s only fitting that we finally talk about a category in the genre that’s been left out to dry until now: The underperforming megabudget Ubisoft skinner box. 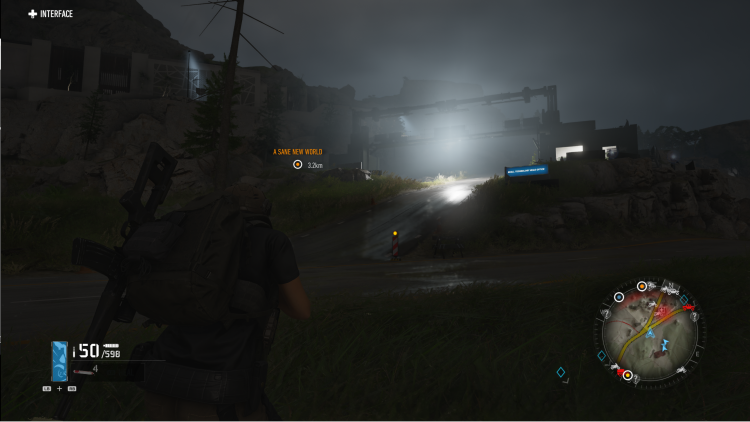 This game is very pretty from a technical perspective, but nothing ever really pops like it does in Ghost of Tsushima.

Breakpoint came into being with the cards stacked against it, to be fair. The previous product in the brand line, Tom Clancy’s Ghost Recon Wildlands, caused an international incident when it was released between then-president Evo Morales’s Bolivia and Ubisoft’s country of national origin and central location, France. The plot of Wildlands is a lurid, fantastical trip through all sorts of Western notions about South America and the people there, prefiguring some sort of cartoonishly corrupt, terrorist narcostate in control of Bolivia’s territory, along with a clumsy depiction of the Catholic synecretism of Bolivia’s indigenous people — the indigenous people who elected Morales in the first place. The public perception of Morales’s Bolivian government in the global north that both informed and was informed by screeds like Wildlands stopped being a laughing matter well before his government was couped in 2019 by the opposition party on tenuous grounds, and to this day the opposition party has delayed elections repeatedly as they lose more and more control of the country and slip further and further in the polls. In reality, Bolivia’s economy is based not on drugs but on the mobilization of industry around its natural resources, especially reserves of lithium necessary for the batteries in many of your high-tech gadgets; the coup government has explored selling that stockpile to the American and European tech industry, with battery-powered car company Tesla owner and CEO Elon Musk infamously boasting that industry magnates and their state sponsors would “coup whoever we want. Deal with it!”

Needless to say, you don’t go into development on the sequel to a property which blundered into that much real-world history without having learned keen lessons from the previous outing: namely, don’t get involved in any of that geopolitical stuff ever again. Breakpoint’s premise epitomizes safe. It takes place on an incredibly confused fictional island off the coast of New Zealand, which was previously an American naval base in World War II and now plays host to a drone-based Silicon Valley-styled startup called Skell Tech, headed by generic Silicon Valley tech CEO riff Jace Skell. Unlike his real world inspirations, this tech CEO isn’t supporting coups of any sort; in fact, he’s the victim here, as hazily-defined private military contractors that he’s hired steal his tech and lock the island down. There were indigenous people here once, but they’re gone now.

You’re Nomad, the semi-anonymous leader of the CIA’s Ghost Recon force, and after a navy ship sinks off the coast of Skell’s island as part of the takeover you’re sent in with all your boys and girls to see what’s what. Your helicopters are destroyed in short order by drones, and your people are executed by Jon Bernthal (Marvel’s The Punisher), who is either due to thin material or bad mocap absolutely mailing in a performance as the game’s villain, Cole Walker, a former member of Ghost Recon and an old friend. There’s a lot of at-times boilerplate, at-times confused thematic work around the US military, private military contractors, and their symbiotic and mutual role in the current world order, but you probably won’t be shocked to hear that everything this game does and that Bernthal does in it, is done better in that Punisher Netflix series that ultimately netted him this job. A lot of the times, cutscenes feel like an exercise in checking boxes, and none of the antagonists ever really pop like, say, the desperate mobbed-up militarized NYC sanitation union in Tom Clancy’s The Division — now there’s an overblown weird-beard fever dream with some actual style and panache! Those garbagemen have flamethrowers! 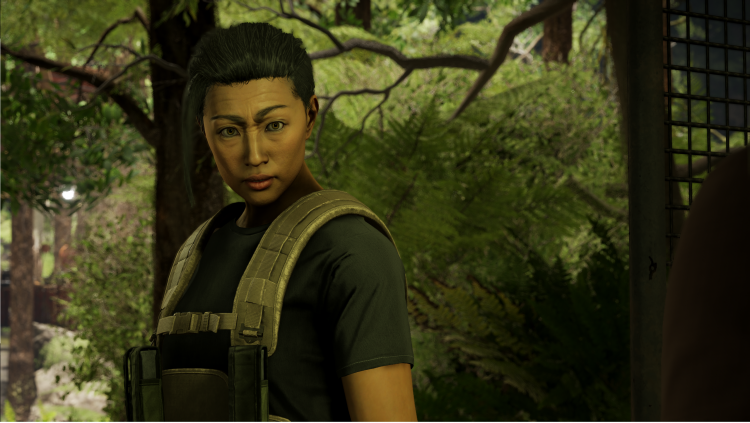 I went with the randomized Nomad the game handed me on launch, and was pleased by how angry-confused she always looked at the plot.

“Walker’s taken over the island; find and kill Walker” is basically all the plot you need to know; it certainly doesn’t get any more interesting from there. You are on this big Pacific island with surprisingly varied biomes for two interconnected reasons: 1) to get loot, in order to 2) make Number go Up. This is a game about Number going Up in a way that none of the games we’ve covered so far in this space have been except the ARPGs. There’s very little done to disguise the fact that all of your missions are variants on solving various compounds with violence; at a point, the story stuff almost seems insulting, as it mocks the idea that you’d care about these poorly-written ciphers with whom your player character is only interacting so that Nomad can go to the next place and do the next gameplay segment to get the next loot.

The loot is fine. It’s fine. You don’t want to be saying just “it’s fine” about a loot game, but…it’s fine. The title incorporates all sorts of real-world tac-porn operator brands so that you can dress your Nomad paper doll up the same way that you, weekend paramilitary that you are, outfit yourself for a day at the range. It has the depth and breadth you’d expect from a loot shooter…but nothing that really puts it over the top. Approaching item level 160, not a single unique piece of named loot has dropped. There’s a semi-interesting gun mod system where you can choose what you put on your weapon’s various Picatinny rail mounts, swap out barrels, and so on, but the gains are minimal and you’re switching through weapons enough that setting up your mods each time begins to feel like a chore. 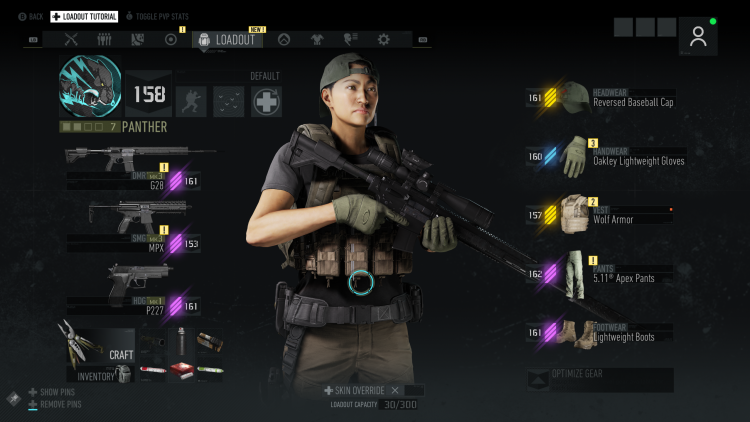 Much was made of the post-release content and bugfixes, and I can confirm the game no longer seems to have any of the really fun, janky breaks that early players found so entertaining (and none of the infuriating ones too, one surmises; it was a very even experience). The addition of AI companions was a big part of the DLC roll out, and, well, they work. You can now Sync Shot absurd numbers of enemies at once when you combine your drone with your AI buddies and sufficiently advance up the skill tree. There are some weird compromises, though — for example, some two-thirds of the vehicles on the island, be they buggies, trucks, copters, whatever, have some form of minigun. The miniguns are absolutely lethal in your hands, but previously you had to engage in multiplayer to really leverage them properly. How are they balanced when an AI companion takes them over? Well, they’re basically useless. If you’re engaged in a minigun fight with another buggy, you’re better off ramming it to do damage than rely on the massive setpiece weapon pouring thousands of rounds a minute into the opposing off-roader. So it goes.

Even with the AI companions, the biggest takeaway from Breakpoint‘s gameplay is that you really should be playing Tom Clancy’s The Division 2. Well, there are a whole lot of games you should be playing instead of these, but if you must play an Ubisoft open-world Tom Clancy military shooter property, put your time and money into The Division 2. The shooting is better, the enemy AI is better, the feel is better…basically the only thing about Breakpoint now that’s superior is that with the AI companions that have been patched into the game, you can now roll through the entire map in single-player without having to deal with GaaS stuff like forced multiplayer and endgame raids. The good news is that it’s no longer quite so easy as it was in Wildlands to completely trivialize the game with Sync Shots; the bad news is that being able to completely trivialize the game with bullet wizards was one of the few things Wildlands had going for it. Breakpoint is indeed easier to snap over your knee, but one asks why you’d want to.

There’s a thing that sometimes happens when you criticize a game; someone says, “Well Game X is fun to play with some friends,” and you reply, “But everything’s fun to play with some friends; they’re your friends. Hell, even Game Y is fun to play with some friends!” In this framework, Tom Clancy’s Ghost Recon Breakpoint aspires to be X, but ends up at Y. If you can get the entire ~$112 dollar content package for, say, around $20 as I was able to on UPLAY recently, then just from a value proposition it might be tempting. Don’t pay retail for this. If you’re the kind of person who would like or love Breakpoint, you’ll almost certainly like what The Division 2 has on offer more, and that’s got a lot more ongoing support behind it as well. The only thing you’re really missing out on is flashback cutscenes of Jon Bernthal not really having all that much to work with in the first place.