Top 5 Santas in Kings of War 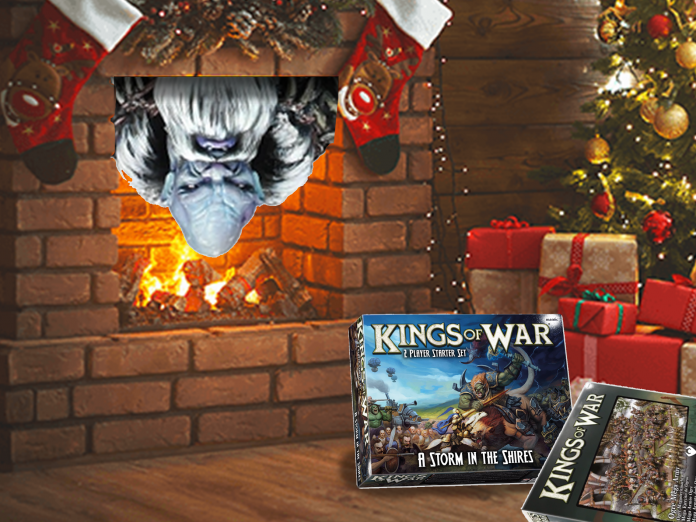 G’day Goonhammer readers! The holiday season is upon us, and we’re not sure if it’s the high coffee intake or something in the tinsel, but we felt compelled to rank the top five Santa-esque models in the Kings of War Mantic Range.

Pannithor is home to a great plethora of warriors and creatures, but none of them are actually Santa Claus. To have a world devoid of the jolliness that such a being bestows seems far-fetched. We have devised a peer-reviewed system (JABS) through which any individual model can be assessed based on its resemblance to Mr. Claus, and aimed to identify the most jolly, bearded, yet speedy models in the game.

There are four metrics by which the degree of Santa resemblance can be characterized which form the JABS system:

Only one unit from each army will be selected. This not only serves the interest of fairness (so not all picks are Dwarfs), but ensures we apply a measured approach to all armies in the search for Santa.

The Abyssals in general are some of the happiest models in all of Kings of War. Nearly every one of them has a toothy grin that just screams (tortured) Christmas spirit. But only the Abyssal Warlock fulfills nearly all the criteria of what makes a stereotypical Santa.

Appearance: The Abyssal Warlock itself possesses a minor paunch, but his ‘mount’ more than makes up for this lack of body mass. Together they match the anthropometry of Santa. They are also red, which reinforces the Christmas look. 9/10

Beard: A disappointing fact among all Forces of the Abyss is the lack of facial hair, yet this simply could be due to the high temperatures of the Abyss burning off facial hair. Given a chance, the Abyssal Warlock might have a spectacular beard. 4/10

Speed: A Nimble, Speed 6 Warlock riding a Moloch at first glance doesn’t seem optimized for the rapid distribution of presents, and you’re right. But his smaller base size means he can squeeze in smaller spaces, like chimneys. 5/10

JABS Score: 6 Baubles out of Christmas

The Goblins are probably one of the few races that actively embody the gift-giving spirit of Christmas. Darting around the battlefield, Winggits deposit explosive bundles of Yuletide cheer to all, naughty or nice.

Jolly: There’s not one, but two absolutely ecstatically happy Goblins per Winggit. An unmatched level of joy. 9/10

Appearance: The Goblins look similar to the Elves of the North Pole, which we’re sure have to step in when Santa needs a break. They are also riding a flying sleigh of sorts, unfortunately it is not accompanied by reindeer (in fact, we’re not sure how it flies at all). 6/10

Beard: Like Abyssals, Goblins lack facial hair. Unfortunately they had plenty of opportunity to grow one so we have to say this is a real let down. 1/10

Speed: The Winggit not only could handle Pannithor-wide delivery of ‘goods’, but at the same time can enable the long-ranged delivery of gifts with it’s ‘Eye in the Sky’. 11/10

The Halflings uphold many Christmas values throughout the year. It is well known they have more feasts per week than any other peoples in Pannithor. They also have a production line of ‘toys’ made by smaller folk (themselves). Of all the Halflings, the Aeronauts are closest in resemblance to Mr Claus.

Jolly: The Aeronauts take their job quite seriously, but at least one of them is having a cracking time. 7/10

Appearance: Halflings might lack the height of Santa, but they make up for it with a healthy rotundness, and a boisterous laugh as they deposit cheer to those below (chimneys not required). 8/10

Beard: The facial hair capacity of Halflings is well-known, in particular their penchant for mutton chops (facial and on the plate).  9/10

Speed: The Aeronaut is a bit slow, and without Nimble will struggle to get to all the homes before Christmas sunrise. The Halfling will definitely fit down chimneys, but will more than likely be overly distracted by the milk and cookies. 5/10

The Northern Alliance is a no-brainer, as chances are they already have the North Pole under control. The Lord on Chimera not only can carry out the duties of Mr. Claus, but can even bring a lovely snowy Christmas to anywhere in Pannithor, thanks to his Icy Breath. Denizens of the Southern Hemisphere rejoice!

Jolly: Four heads are better than one, especially when one of them looks so happy, like “heard a good joke”- or “devoured a Basilean”-happy. 8/10

Appearance: Thick furs (a must in the North Pole), and the full array of horns on every head (similar to the antlers of multiple reindeer!). Just missing a bit more girth around the midriff (probably too much keto-diet). 6/10

Beard: The goat-head of the Chimera has a nice beard. 7/10

Speed: There is no doubt the Chimera is fast, with Speed 10 and Nimble, but he also has Half-Elf Beserkers, which could definitely make the toys faster than the standard Christmas Elf. 10/10

JABS Score: 9 Snowballs out of Christmas

Many would say that Dwarfs have an unfair advantage by JABS standards, but the Abyssal Dwarf Supreme Ironcaster on Great Winged Halfbreed outdoes any Imperial Dwarf when it comes to Santa likeness. Make sure to measure his charge range, and check it twice.

Jolly: Both the Ironcaster and the Winged Halfbreed are showing their teeth, it doesn’t look exactly like a smile, but it’s not far off. Extra points for the Halfbreed ‘smiling’, too. 7/10

Appearance: Santa is well known to be a large individual, bedecked in red. This matches both the Ironcaster and the Halfbreed mount exactly, as long as one ignores the horns, tusks and bat-like wings. 8/10

Beard: The Ironcaster and Halfbreed possess incredible beards. Not even Rudolph has a beard. 10/10

Speed: At Speed 10 and Nimble, the Ironcaster and his Winged Halfbreed have as good a chance as any to get around Pannithor. Chances are no rooftops would survive their visit, but that is outside the scope of this study. 10/10

The humble Skeleton Warrior has an uncanny resemblance to Santa. While they might not be up to the task on Christmas Eve, they at least get a mention.

Jolly: Toothy grin, these guys never stop smiling about how good Christmas is. 10/10

Appearance: Santa has a human skeleton. This picture of skeletons could contain a former Santa. Definitely consumed a healthy amount of milk when alive. 8/10

Beard: Like the last vestiges of humanity, any beard fell away long ago. 1/10

Speed: At Speed 5 and Shambling, this Skeleton will really struggle delivering the presents, but at least they can make it down nearly any chimney as long as they dismantle themselves. 1/10

Christmas is alive and well in the world of Pannithor, but we can’t say the same for the general population. Chimneys are barricaded against the jolly Halfbreed. Vast piles of cookies and vats of milk to satiate the merry Chimera. “Gifts” whistle through the air from mirthful Winggits and Aeronauts, and the cackling of cheery Abyssal Warlocks drives any who survive insane. Merry Christmas and Happy Holidays everyone!