…or how I learnt to stop worrying and love the plane. 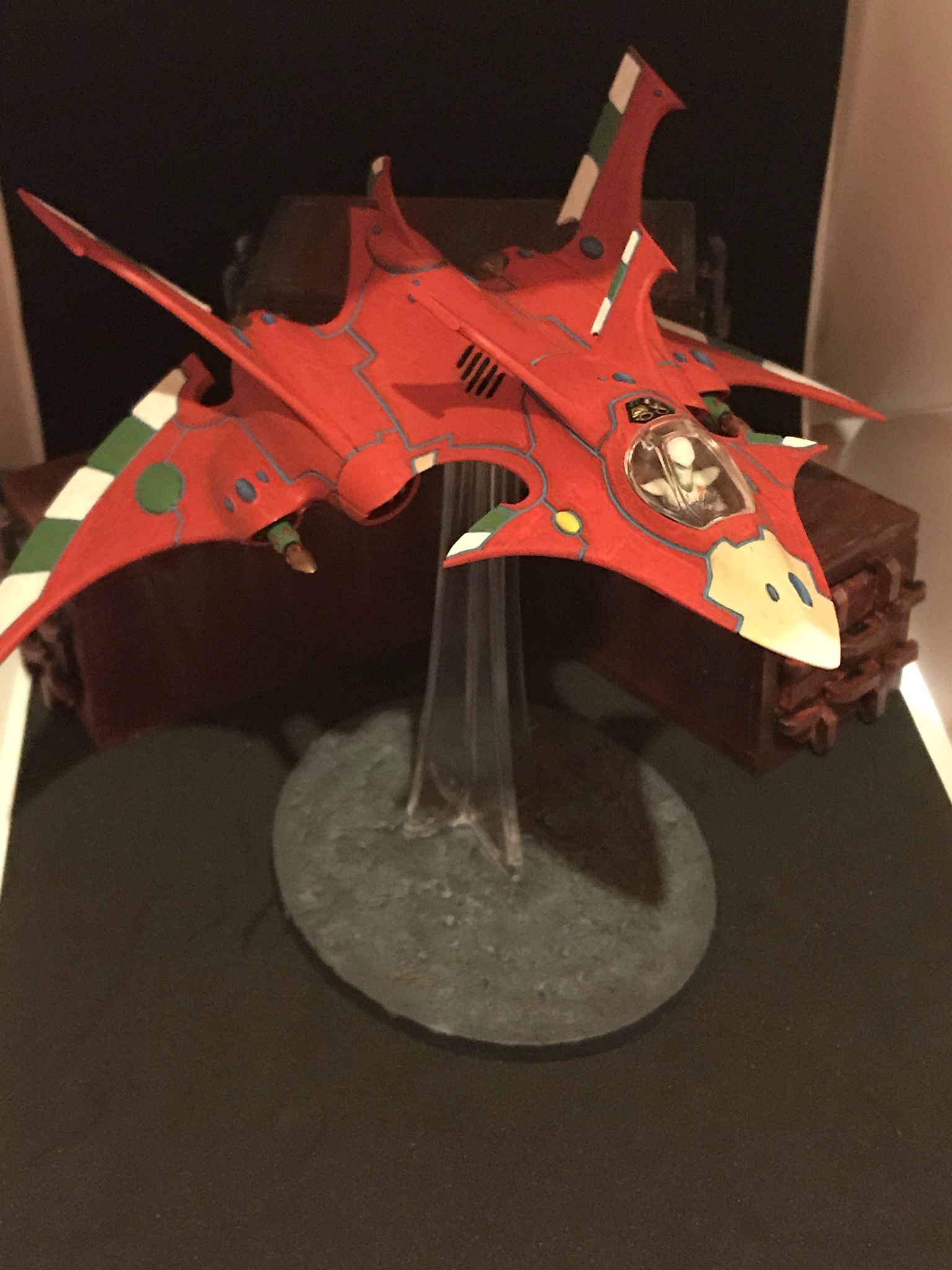 This is a test for regular readers, who should already know how I feel about planes.

After the fun warmup of last weekend’s Tides (which you can read about here), it’s time to get serious for 2019 and head into the wilds of the north of England to take part in the Last Chance Open (LCO from now on). Assuming we aren’t all devoured by wolves (which, as a lifelong soft southerner, I feel is a legitimate concern once you’re north of Birmingham), we’re in for a fantastic weekend of high level play, with 97 players competing in the ITC champions missions. This’ll be a new experience for me – while I’ve read and listened to a lot of strategy content about them, as they’re the norm for many US events, I’ve never actually played them in a tournament setting. With that in mind, I’ve been doing some moderately serious playtesting for this one, practising with my updated list to make sure it performs outside of the UK norm of Eternal War/Maelstrom.

We’ll go into more details of that in a second, since as usual we’re going to cover:

The LCO is running the ITC championship missions straight out of the standard ITC mission pack from Frontline Gaming, with no modifications as far as I could see. ITC terrain rules will also be in effect (i.e. ground floor windows in ruins block line of sight, and some completely enclosed buildings may exist).

The missions are the main thing here – ITC missions are completely different to those in the rulebook (although some of the ideas from them have started popping up in the latest Chapter Approved ones).

This doesn’t change the fundamentals of how the game is played – you still want to be holding objectives and killing your opponent, but the structure of them does a few things.

From the primaries, the “end of battle round” objectives make a serious case that in some matchups, going second is a significant advantage. Holding more objectives in particular is much easier if you have the “last say” in moving models around, especially if you have mobile obsec units. The fixed/curated objective placement also disincentivises pure castle lists – whereas in a game with placed objectives you can almost guarantee putting two in your castle, in ITC you won’t be able to rely on that, so need units that can go out and claim them.

The secondaries are what gets talked about a lot, and tend to encourage two things:

a.) You want to build a list that has a good chance of achieving maximum points on at least one of the “objective/positioning based” ones over the course of the game. My list, being full of very fast planes, is ideally placed to claim the “Recon” objective (have a unit in each table quarter) with high reliability – I believe I maxed out Recon in every single playtesting game we did, even the one I lost hard. You want to be able to pick at least one of these comfortably because…

b.) You want to build a list that minimises the number of the “kill stuff” objectives your opponent can reliably score against you. For example, the Talos lists that are very popular in the UK meta are less popular in the US, because each individual Talos qualifies for a point on the “Big Game Hunter” secondary. Even in my recent Talos-related drubbing in the last round of the AoC open I had killed enough of these to max out this secondary, and would in fact have also scored max points on “Marked for Death” in the same game thanks to taking down all of the planes and Harlie bikes.

I’m not going to go through all the secondaries here – go look at the full pack here if you want to see them all.

That’s the very quick tour of ITC, and while I have mixed thoughts on it over all I do like that the missions are actually quite simple while definitely giving at least a good play experience. My main gripes with them are:

I’m sure my thoughts on them will evolve as I play them more, and indeed Frontline proactively update them based on player feedback fairly regularly, and I definitely respect their commitment to trying to craft a strong competitive experience.

So how does this affect my list? More to the point, has Chapter Approved affected my list? Lets take a look! 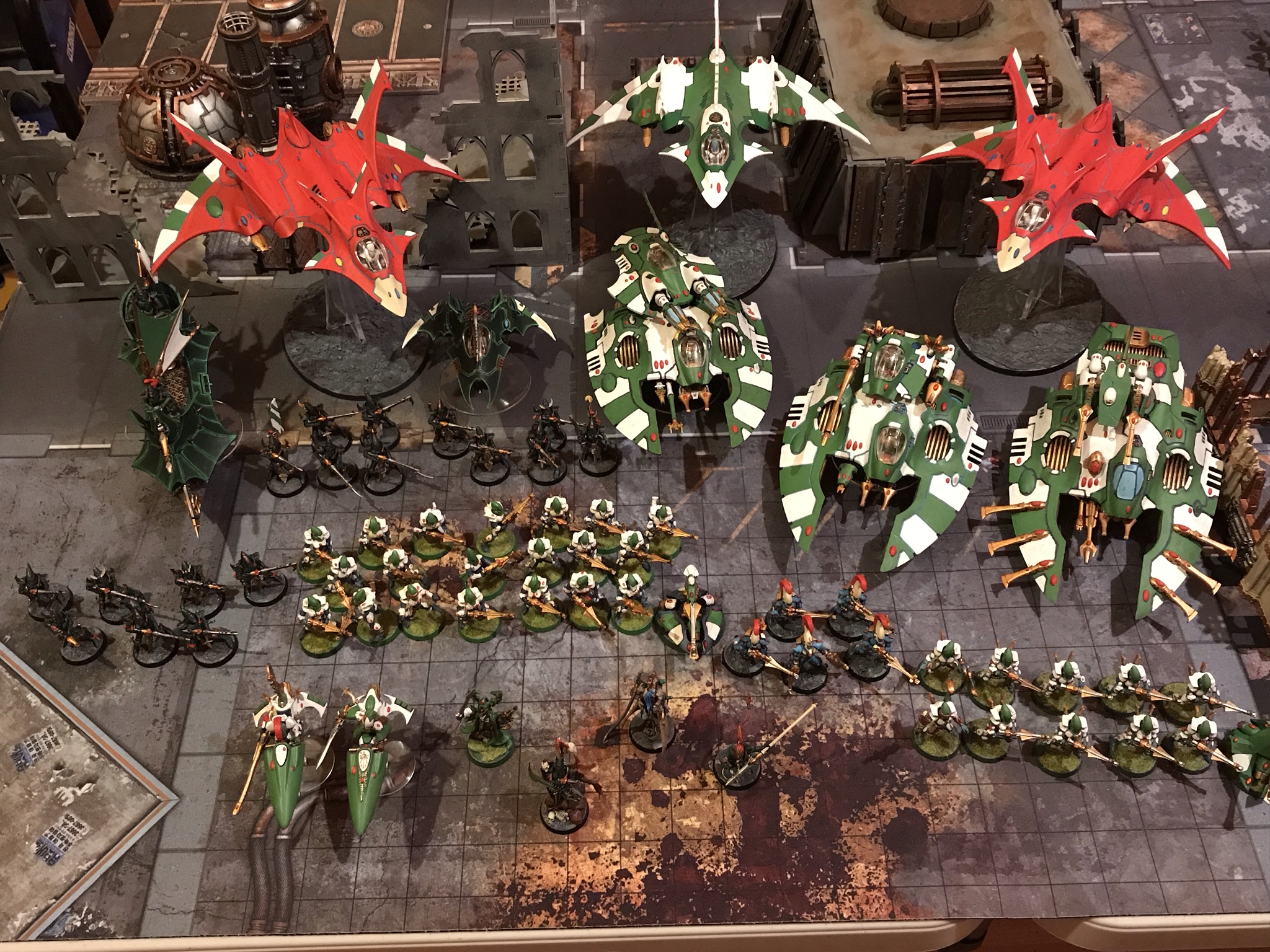 Most of that’s going to be a bit of an anticlimax for regular readers, as while there are some new toys, it’s recognisably my normal list. ITC allows free changing of powers ETC before each mission, and my standard pre-game setup is going to be:

This was the list I started my playtesting with, expecting to need to swap at least some things around to fit ITC, but it actually turns out to have been relatively spot on first time. As discussed, I can comfortably score Recon (which I already knew about as it comes up a lot on podcasts by Eldar players), and in some matchups can probably afford to take “Behind Enemy Lines” as well. My army is also deadly enough to take “Old fashioned” (which includes “First Strike”) in most contexts – even against Knights I can reliably wipe a unit first turn.

On the “not conceding points side” my army has slid into quite a nice spot (largely by accident). Obviously “Big Game Hunter” is an auto-pick for me, but there are only a total of seven units eligible for Big Game Hunter and Marked for Death (the other “kill things that are big but not like titan big”) in total, so an opponent can’t just pick both and max them out. Meanwhile, I have a generous number of infantry, but still not enough to max out Reaper. In our playtesting, the best we could figure was for my opponent to take “Headhunter” – I have six characters, and two are relatively sacrificial, but even that’s risky, because in a close game my three Craftworld characters are all highly mobile and can stay out of trouble if that needs to be my priority.

Entirely my coincidence I seem to have hit a sweet spot, and honestly I can’t think of much I could do to optimise that further without completely changing the nature of the list.

For those who read my Eldar review, you’ll know I was excited to try out some of the units that got a point cut, in particular the Night Spinner and to a lesser extent the Falcon. They’re now cheap enough that after cutting a Wave Serpent and the Banshees from my AoC list and then recovering a few more points from other minor changes, I can squeeze both in.

Having played a bunch of games with the list above, my conclusion is that Night Spinners are extremely legit now, while the Falcon is merely fine. If I had another two weeks, I’d paint up a second Night Spinner and swap the Falcon and Dire Avengers out for that, some rangers and a few scattered upgrades. I’m not expecting to hate having the Falcon, and having a squad of infantry that can run around disposably while still shooting stuff is cool, but the Night Spinner is wonderful for pretty much all the reasons I expected – it has a very high potential damage punch for its cost, and can either do disproportionately well against units relying on some kinds of defences (it’s great against Dark Eldar planes and Venoms, for example, thanks to their low toughness and 4+ saves) while still being able to contribute to a gank on a Doom/Jinxed target extremely effectively.

It and the Falcon are also both good targets for Guide that will be on the board turn 1, meaning I can take that to use with my Guardian bomb without being worried about “wasting” a cast T1.

Honestly, for those who’ve ready my previous previous/reports, especially the AoC one, there’s not that much more that’s changed, I’ve just harvested a bunch of points from minor changes such as taking off the warlock’s singing spear and changing one Crimson Hunter to Starcannons (which honestly might just be better anyway now) in order to squeeze in an extra tank body as above. I’m still largely playing a mobile force that wants to swing hard onto one flank, crush it totally, then sweep through and mop up the rest of my opponent’s army, with enough flexibility to adapt that strategy in games that need it.

Adding two backline vehicles does change things a little – I do find that it’s helpful to have some stuff you don’t mind just squatting on an objective in your deployment zone, and the Night Spinner will do that for days. As mentioned, you’ll often only get one of these in ITC, so it would be nice if I could have had a Crystal Targeting Matrix on the Falcon (frustratingly I’ve spotted while writing this that I didn’t notice and reclaim the five points for a Stinger Pistol from my Haemoculus – they’re mandatory in the Codex, but not in the Index – Index options are dumb y’all). Swapping the Falcon out to a second Spinner would then allow me to have CTMs on both Spinners, another strong argument for doing it that I’ll almost certainly implement in time for my next round of larger events in March/April unless it wildly underperforms here.

That’s about it – pray that the wolves don’t get me and tune back in next week for a report on how the event went!