Woohoo, it’s finally here – after a largely empty back-half of January and February (barring a quick 2-1 at a local RTT with a fluff army) the tournament grind for 2019 is about to kick off properly – I now have two events a month booked out until June, so for you lucky people who enjoy reading these things, the content is about to flow once more.

To start us off, this weekend sees me heading to winter warfare, hosted at the Darksphere Megastore by the London Warhammer Gaming Guild, who recently featured on the UK’s biggest current affairs radio program explaining Warhammer to the masses (no really). As ever, so that we can leap straight into the game write ups while they’re fresh in my mind next week, today’s post will talk through my plans and expectations for the event, covering:

LWG are running the ITC champions mission pack, missions 1-5, in order. The only modification they’re making to the standard pack is removing the enclosed building rule that Frontline use at their own events (ground floor ruins are still blocking LOS). I’m fine with this, because while I enjoyed my first proper taste of ITC a lot, it did nothing to change my opinions that enclosed buildings are incredibly dumb and terrible. You can read more of my thoughts about the ITC format (as well as an explanation of what it is if you’re a new reader) in my preview from the Last Chance Open.

Given it’s an exciting time in the metagame, it’s also worth clarifying that the new Index Assassins rules are not in play, so don’t @ me about the vulnerable bike warlock. They will be in play at Battlefield Birmingham, so I’ll have to do some switch ups for that.

(Also, I just want to point out that I totally called it about assassins being really fricking good in my Codex GSC review, come to Goonhammer for the most accurate hot takes.)

Regular readers will remember that I had three possible sets of list changes worked out after the LCO. I am of course, picking “none of the above”, because at some point in the interim for reasons on which I’m now vague I was running some maths and realised I could do something different. As soon as I’d figured this out my thoughts were overtaken as if by the sound of many flapping wings because, dear readers, they’re back: 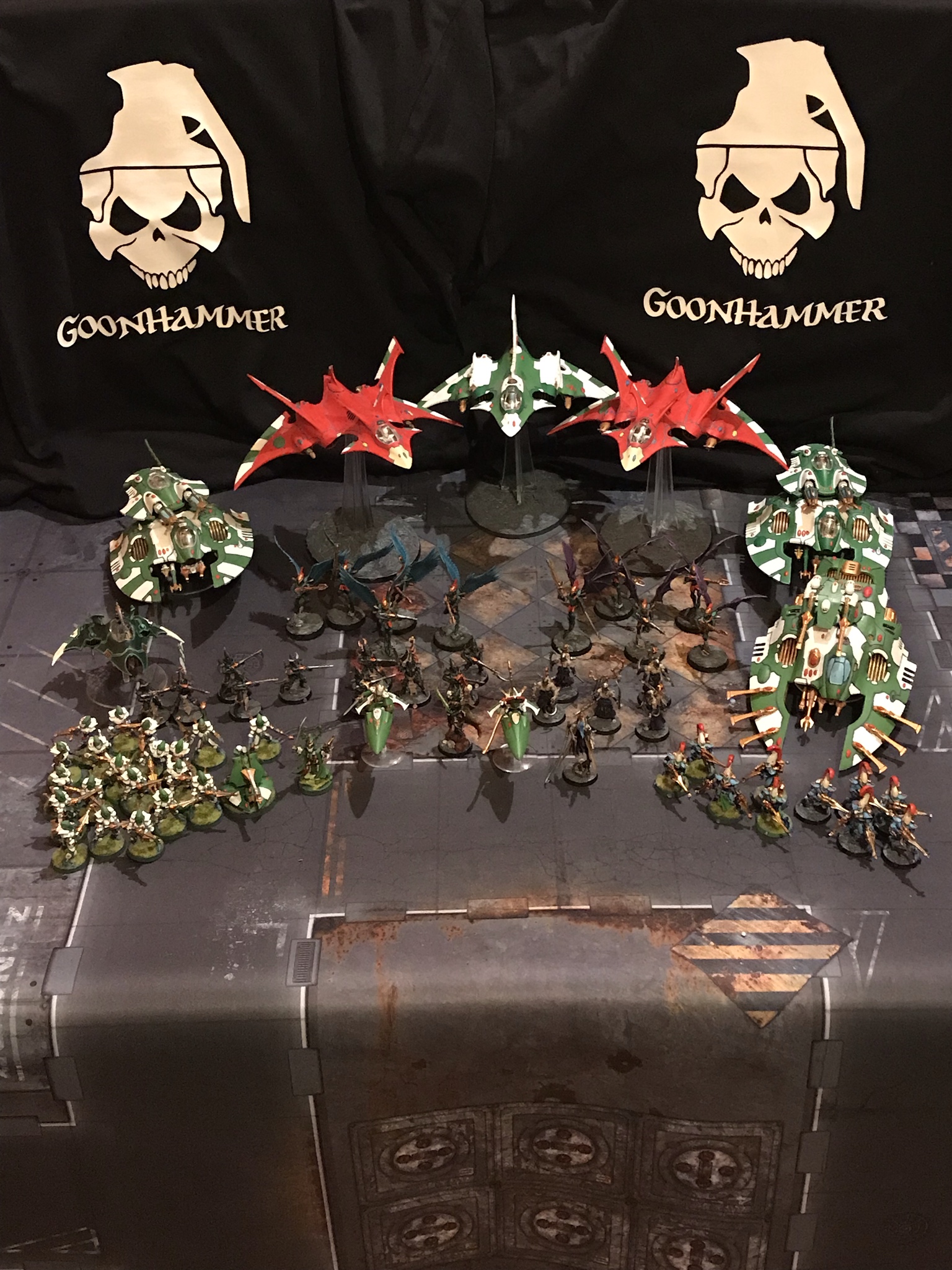 Scourges! My beautiful winged babies! This will definitely prove that spending two weeks of insane crunch to get them painted up for my worst ever tournament result wasn’t a waste.

No really, I think this is actually a good idea, for reasons I’ll outline shortly.

LWG aren’t requiring any picks of relic/powers/traits etc. on lists, but the loadout will usually be:

While the overall strategy for the list hasn’t changed much and this is going to be relatively short as these go, there are definitely a few notable things to cover

The first thing to note is that this list succeeds a lot better than the previous one in not giving up secondaries easily. I now actually only have a total of 7 BGH/MFD targets and also give up Headhunter a lot less easily, as the effectively sacrificial Succubus is out, and the Haemoculus can be more cautious when he’s not out babysitting her.

I’m hoping the list is now actually quite tricky to max out against in “close” games, which would certainly have been relevant in my last round at the LCO.

The following units are benched from the LCO:

The Falcon and Guardian Squad are quite easy to cover – the Falcon was basically just a bit “meh” and I would have preferred a second Night Spinner in pretty much every game, so now I have one. The Guardians are out (in favour of more DAs) largely to make the points work for the new list, though it is worth noting that on further reflection since the LCO I did realise they’d pretty often died very easily without much fanfare, so this is a change that might stay, we’ll see how it goes. The larger squad tends to be a bit more resilient, though I was annoyingly unable to finish getting the gunswaps done for my second CH early enough to be confident submitting a list with them on, and thus freeing up the points for the second platform on the big squad.

The Succubus is at least partially gone because she frees up points – I did like her, and will probably bring her back to try in different ways, but basically, in ITC in particular, I was finding her and the Haemoculus in their Raider to just be a gigantic target labelled “aim here for easy secondary points”. I think there’s a decent chance that she comes back for a trial at some point, but for now, we’ll see how we do without her. Obviously getting rid of the Raider as a target is one of the upsides of not having her, so that’s out too. 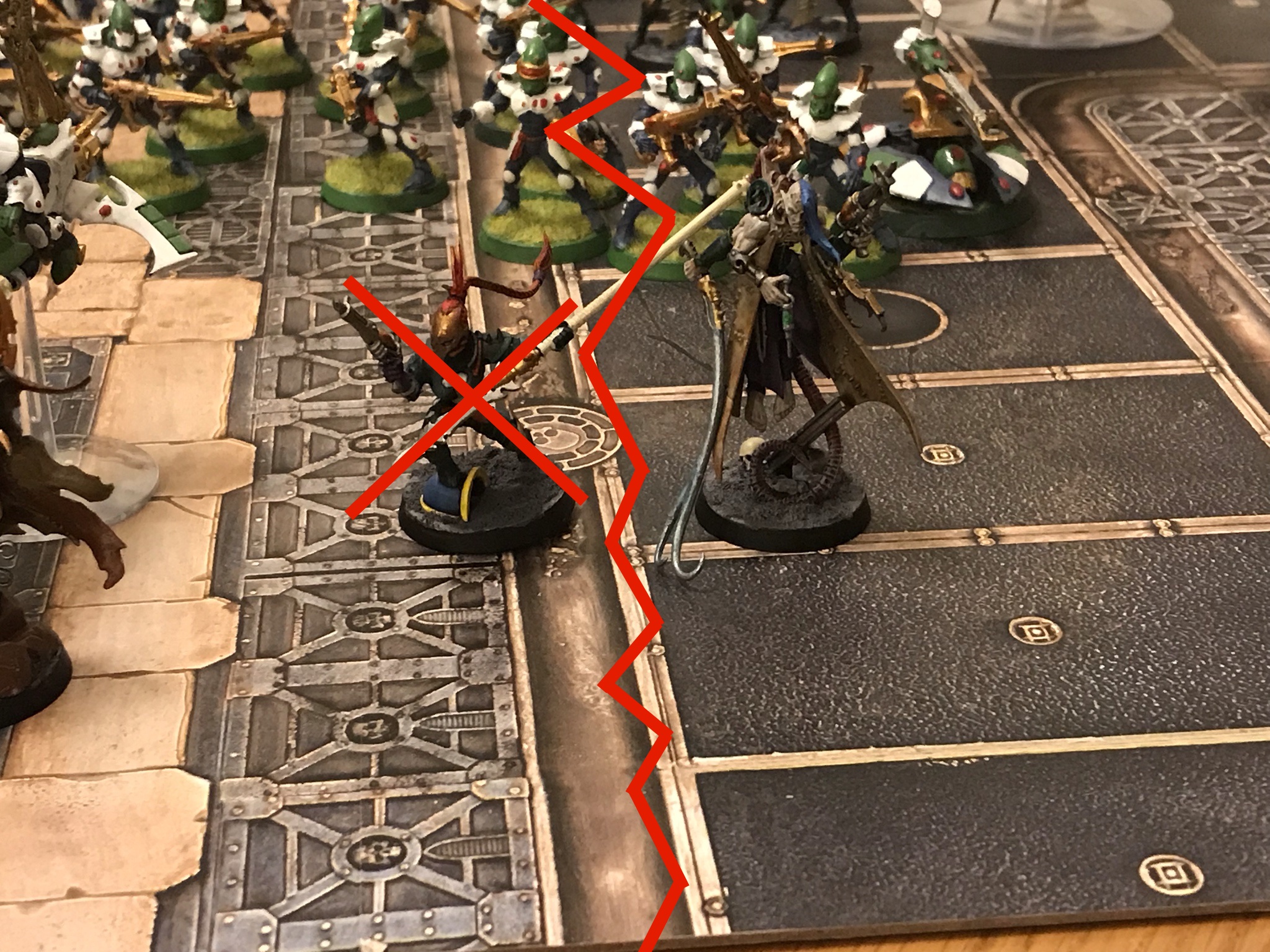 The other way I’d wondered about using her was to put her in deep strike and have her looming as a threat to come in and assassinate a backline unit of some sort. However, doing that or using Screaming Jets on the Venom with the Shredder squad is an “either/or”, and I want to try an event with access to that first – if it doesn’t perform, I’m likely to swap the Succubus back in next time around.

The following new (or returning after a break) friends are here: 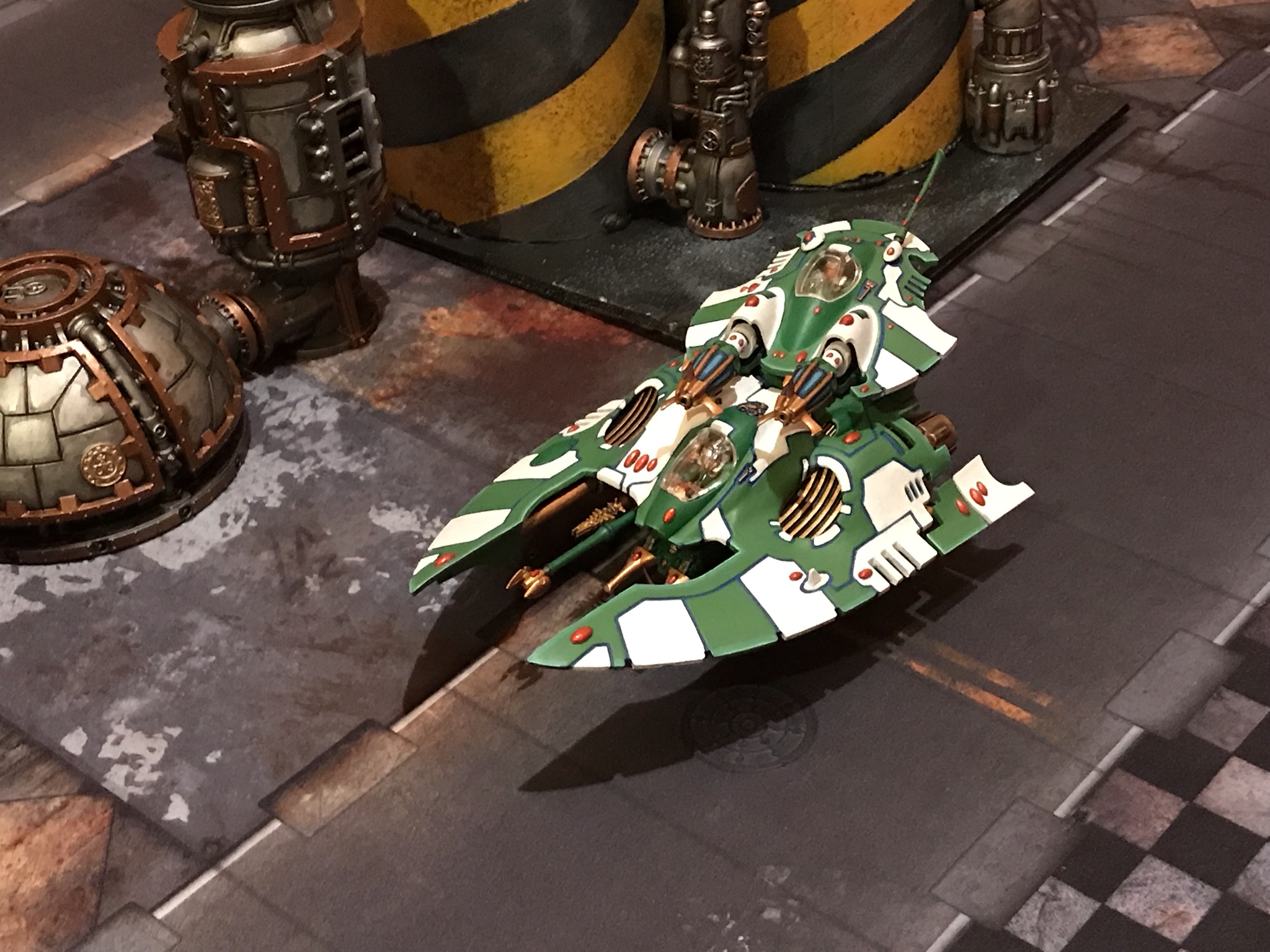 It’s also a very handsome boi (that makes me want to repaint the old one).

The Wracks are here because I want to see how they do. In the original planned version they showed up in, I’d sprung for a bigger squad to take advantage of “Black Cornucopians” – they’re tough enough near a Haemi that my calculation was that if they were in a Raider and most of them died after it got killed, I could res the unit.

Obviously the Raider is gone, so now they’re relegated to largely being a backline objective holder that’s slightly less paper thin than the Kabalites, and has the threat of suddenly teleporting across the board if my opponent makes a mistake, especially on missions 2/4 where my opponent will have usually have an objective within 6″ of a board edge. The Venom Blade is there because it’s really cheap and slightly buffs their ability to put down something like a Company Commander. They’re also often going to set up surrounding my non-transport characters – one of the only big losses from not having the raider is that I could set up my bike characters between it and a Wave Serpent and pretty much guarantee they weren’t getting shot by anything like planes or Coldstars turn 1. I’m expecting to use a mixture of the Wracks, the Venom and one Night Spinner to fill that gap, depending on the mission. 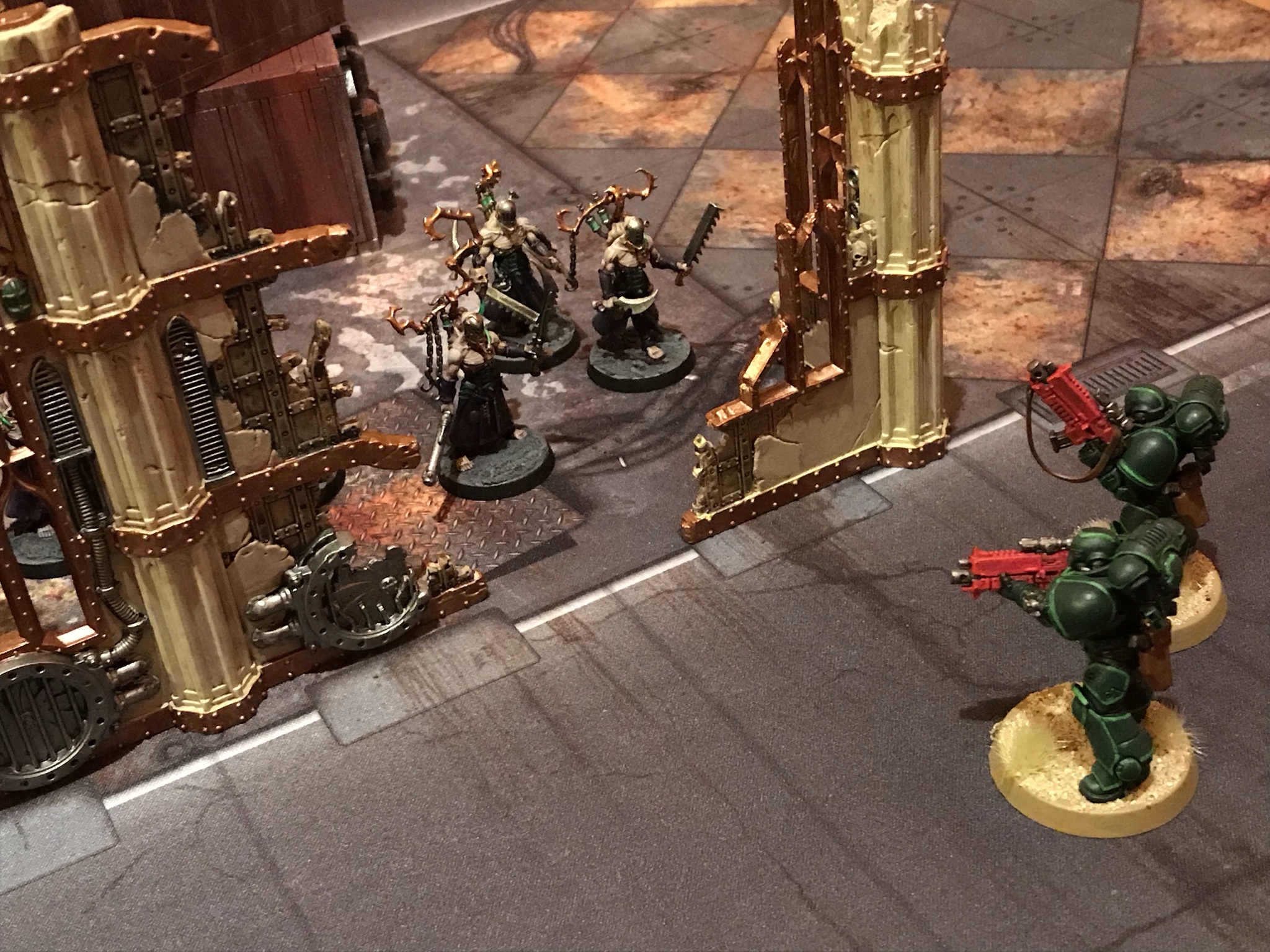 Pictured – not actually when you want a Venom Blade.

Finally, of course, 10 of my 15 Beautiful Winged Children (TM) are here. They’re mainly here to close a gap against specifically Castellans – I’ve found that the previous list was just never managing to land the Castellan kill against multi-knight armies, and while I’ve won games where that was true on points, it’s always an agonising experience. The problem with the Castellan for my list is that assuming they screen it even vaguely sensibly going for it on turn 1 is out, and by turn 2 my army has had at least one turn of being Castellaned. Add to that, Eldar can’t easily “bluff” going after a Castellan to bait out a 3CP rotate, because it’s massively, massively obvious that you’re going to try and kill whichever knight you “Doomed”, and you end up never feeling like it’s the “right” target, but sometimes just losing if it then runs hot. 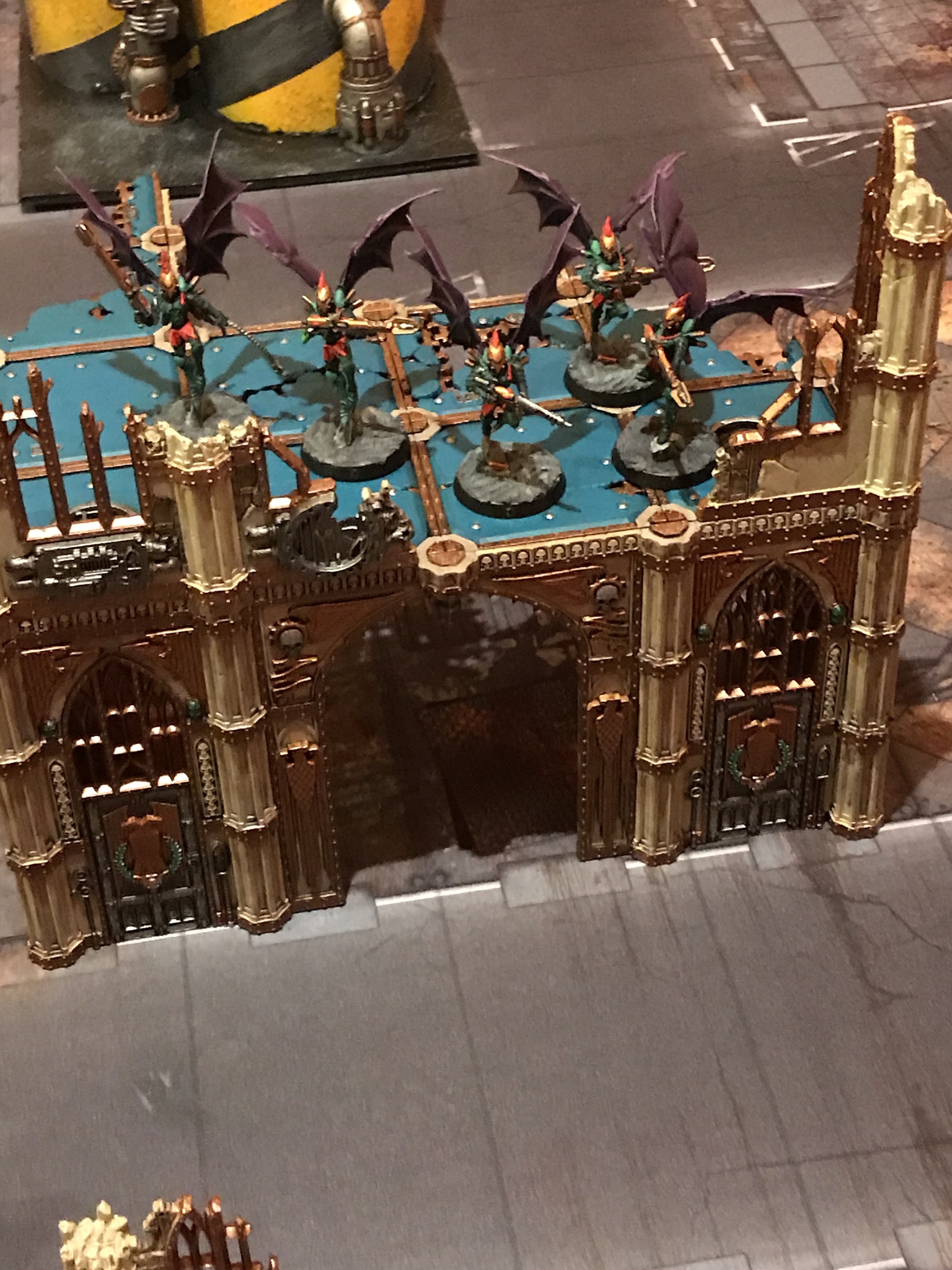 Only running ten also means I can have “Bat squad” and “Bird squad”, which pleases me.

With two squads of Scourges, I can drop in and do ~10MW average to a Doomed Knight, which significantly flips the maths in favour of it being worth having a go unless things are already truly dire by turn 2. The nice thing is, against a multi knight list they’re still useful at that point – they and the Guardians can go through about 3/4 of a Questoris by themselves with the right buffs/debuffs in place. This can let me cement a lead on turn 2 after a good turn 1, or act as a hugely helpful “comeback button” in game that’s started badly. They’re also a good choice for trying to finish off a knight that’s clung to a few wounds, because they don’t need the Doom to reliably do a few wounds. Expert viewers may recognise these scenarios as broadly descriptions of the two games I lost at the LCO – in round 3 I had a great turn 1 and wasted a knight, but then narrowly missed a kill on a second one on turn 2 and had a run of unfortunate events through to a quite convincing loss. Round 5 I whiffed and narrowly missed a kill turn 1, and while I killed a knight on turn 2, the one left from T1 tanked what I threw at it and got another turn of action, and I eventually lost that game by tiny numbers of points.

The key thing is that I haven’t really had to compromise any of my army’s existing “turn 1” output to get them in, and they substantially help with the followup. This is why I think they’ll do better than they did in their run last year – I’m no longer leaning on them as my “primary” source of knight killing – they’re now the cleanup squad, a role they’re better suited to. Two squads is also a bit more sensibly restrained, and if I have another improbable run of not meeting vehicles like I did at Battlefield Birmingham it won’t be as much of a problem.

I hope this is true anyway. They’re so pretty. Flap flap.

I’m mindful that I have fewer things that can push the board centre here, but I’m hoping the fact that I can more reliably push Knights out of it, and have a lot more fringe mobility in the form of the Scourges and the Wracks will make up for it. I did try out Wraithlords at the RTT I went to as an option for pushing centre, but unfortunately they’re just massive liabilities in a Knight Meta, for all that they’ll hurt one bad in melee. If I find this is really holding me back, I’m likely to look at finding a way to get the second Wave Serpent in for the next ITC one I go to. I’m unlikely to change that for Battlefield Birmingham though, as I find fringe mobility more important than pushing centre in ETC. Being careful about controlling space with my planes should also help.

I still haven’t run into a real, proper horde list for a while, an have taken some of my anti-horde back out since last time, so I’ll also be interested in what happens if I run into Orks or Daemon spam. Horde is very popular in ETC, so that’s a much more present worry for next weekend if it turns out I’m not up to it!

That’s a lot of nice theories, but what do I know, it’s like, a month and a half since my last big event. Come the weekend, we’ll see how this all works out in practice.

Join me next week to find out how things went!