It’s another double event month readers, so after an Easter weekend of recuperation we’re straight back into the swing of things with another tournament preview, this time for the St. George’s Champion event being run by Glasshammer Gaming. As reader’s of last week’s report will know I wasn’t planning on changing my list (perhaps foolishly on one point as I’ve realised now the submission deadline is past) so this won’t be too long, but the Glasshammer team are trying something new with their missions, so there’s a few things to talk about. We’ll just be covering:

Glasshammer are trying something novel by combining aspects of ETC and ITC events. ETC events tend to combine an Eternal War mission with a Maelstrom mission, and what Glasshammer have done is replaced the Maelstrom component with ITC secondaries. In theory I like this a lot as a thing to try – while I enjoy Maelstrom, I’ve had my fair share of games where I’ve been screwed out of a win by the cards, and ITC secondaries obviously remove that risk. It also allows them to play with objective maps with different numbers and positioning of objectives, which I’m a fan of, as that helps keep the different games feeling fresh.

Where I’m slightly less sold is with some of the other things that have come along from the ETC, notably differential Kill Points (i.e. at the end of every mission the person who killed more units gets up to 6VP for their margin of kills) and ETC style scoring, where Tournament Points are determined based on VP differential, with a margin of 20 being required for a maximum round score.

Combining these with the replacement of Maelstrom Objectives by ITC Secondaries gives a format that’s outrageously favourable towards small model count armies such as Imperial Knights and the ever popular ETC special of Magnus with Renegade Knights. 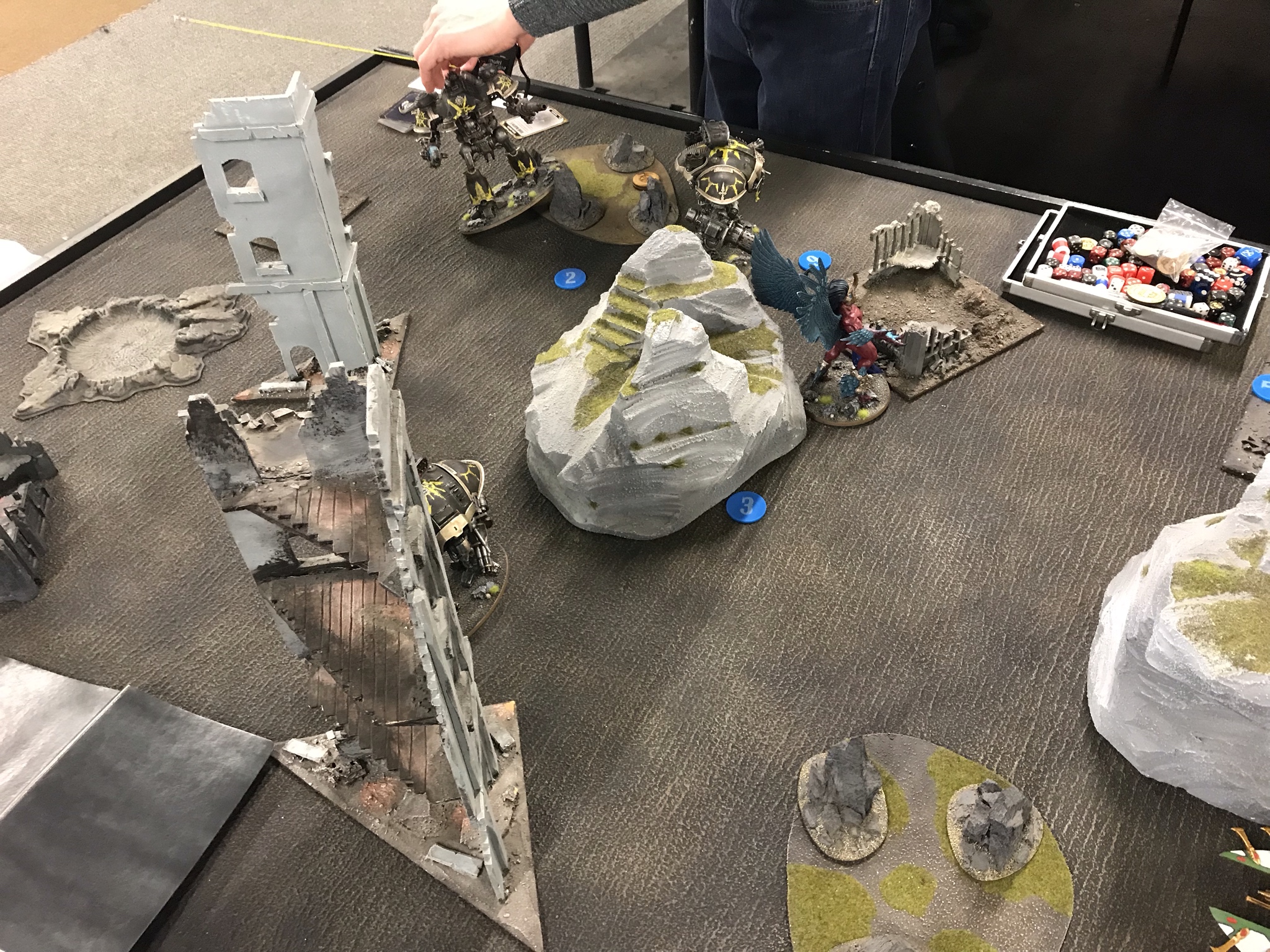 Stupid winged jerk coming round here with his robot buddies thinking he’s the master of the arcane arts.

My experience of ITC secondaries is that they’re quite favourable to this sort of army unless you’ve brought a complete points denial list, whereas in standard ETC Maelstrom tends to skew against them and balance the Kill Points a bit.  I went over my scoresheets from my last ITC event and the only game in which the losing player didn’t get at least 8 secondary points was the kind of one-sided stomping that borderline mathematically can’t happen to Knights.

I’m especially worried about some of the rounds with fairly tight Eternal War scoring caps such as Retrieval Mission (where max EW points is 12). Assuming a four-Knight army, and them scoring first strike and 8 secondary points (which I think realistically is almost always going to happen) it becomes impossible for me to score a maximum victory (even assuming maxed secondary points and all tertiaries) as soon as they destroy my second unit. I’m not a massive fan of those odds.

The only possible out is that it’s not (currently, I’ve put a question in) clear from the pack if a tabling is an automatic max-points win (which it usually is in ETC). In that case it does give me an avenue to a maximum score in every match. If not, I think at least some elements of this pack will need a re-think for future iterations – if I’d had more time to plan I could have tailored my list to it a bit more, but I’m not a fan of a singles format where you can go into a game and it be functionally impossible for you to score a max point victory, simply because even more than normal a few unlucky matchups can take you out of contention for top placing.

Despite these gripes, I’m still enormously looking forward to playing the missions, as they sound like a blast, I just think that if the same set gets run again, some thought will need to be put into resolving the culture clash between the ETC scoring system and the elements from the ITC format, which by design are meant to lead to very close games where every point counts. 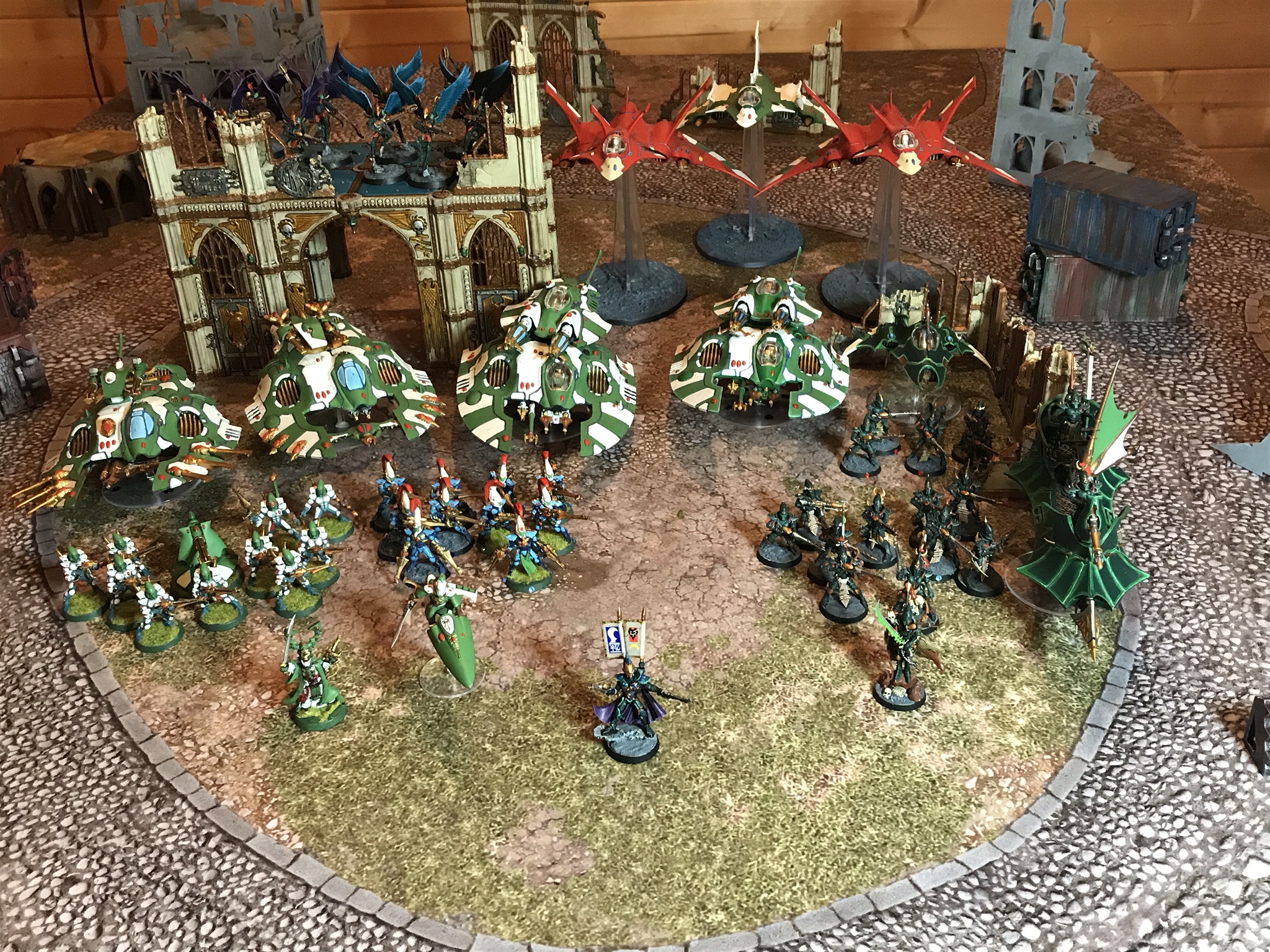 You know it, you love it, and after the relatively successful run at BIG GT I wasn’t feeling inclined to change it.

Now that I’ve had time to crunch the numbers on the format that, er, that might have turned out to be a mistake, although I’d caveat that that I’m not wildly sure how I’d have changed it enough to avoid the differential scoring problem I outlined above.

The one proper head slap moment is that this list makes the mistake I carefully removed from my LWG ITC list (and has snuck back in because I’ve been playing ETC for a few months) of having 8 targets for Marked For Death and Big Game Hunter. This is particularly annoying because of the differential things – in matchups like the Knight game I really want to be leaking as few points as possible. I will admit to not being wildly sure what I would actually change to dodge it. The Raider has been working super well, as has having two Wave Serpents, and if I take out the Night Spinners I’m a bit worried about my on-board alpha strike potential.

However, having twidled the numbers around a bit, I think there is a correct play, which would have been to:

There are some other possible minor permutations, but I’m pretty happy that one would have been a good solve here – it gets me back to 7 MFD/BGH targets and compensates for the loss of the Night Spinner in terms of alpha strike potential with four Krak Missile shots. Mind you, even that loses access to some no-LOS shooting, and ITC ruin rules are going to be in effect, so it’s still imperfect.

I’ll definitely have to have a think about this after the event, as we’re heading back into ITC land fairly soon. Might have to finally pull the trigger on some Shadow Weaver Vaul’s Wrath teams (though they’re worse in full ITC than they are here because they bleed easy kills for the primary scoring).

Ah who am I kidding, it’s probably BIG FAQ time on Friday, the future is an unknown land of mystery.

And on that note, that’s it for today – tune in next week to find out if I manage 5 consecutive draws against knights, or manage to thread the needle of the scoring system towards a big win.