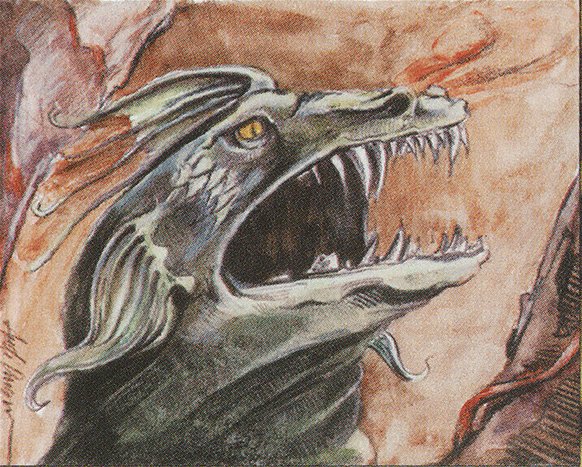 Back in my day, before you kids came along with your Emracools and your Urgos, when YOU were the only planeswalker around, and Commander was a military rank, we used to play the greatest format ever created – Elder Dragon Highlander. Your General had to be one of the 5 coolest, most iconic creatures in the history of the game: Arcades Sabboth, Chromium, Nicol Bolas, Palladia-Mors, or Vaevictis Asmadi. These legends gave the format its color identity restrictions, its commander damage rule, and its name, as well as setting the tone for the games. Battlecruiser Magic was the name of the game with flashy, expensive spells and deliberately lengthy games in contrast to tournament Magic. Nearly two decades later the game has changed in many ways, but how sweet it feels to turn an OG Elder Dragon sideways for lethal sure hasn’t. 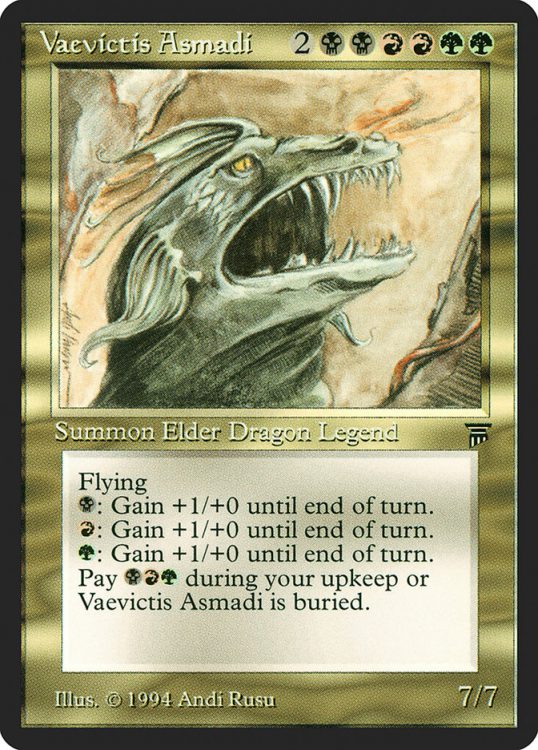 Today we’re kicking it old school, ramping our way into windmill slamming giant Dragons into play and daring our opponents to stop us before we burn down their artifacts, their creatures, and their life totals. Vaevictis is a very linear card, but can be a very powerful one, and fortunately we have access to green and all of the ramp that comes along with it. Unlike his lesser kin he is capable of turning any color of mana into Firebreathing so none of it will ever go to waste. Ideally we want to chain cards like a turn 1 Green Sun’s Zenith for Dryad Arbor into mid level ramp like Hour of Promise fetching Cabal Coffers and Urborg, Tomb of Yawgmoth and then into game ending doubling effects like Mana Reflection and Zendikar Resurgent.

Once we have that big mana train rolling, the game plan is pretty straightforward. We want to send big dragons crashing in turn after turn, hopefully setting things on fire as they go. There is a strong subtheme of firebreathing in our creatures, meaning there also some dragons that could be replaced with better versions overall, but we’re here for fun, so we’ll be casting Dragon Tyrant and liking it! We have a couple of dragons that pump themselves like Hellkite Overlord, and more that pump our whole team like Kolaghan, the Storm’s Fury. There are also a number of dragons that breathe their fire on various targets, like Dragonlord Atarka, Drakuseth, Maw of Flames, and Scourge of Valkas to allow us to deal with troublesome creatures, planeswalkers, or players that we can’t connect with. Hoard-Smelter Dragon and Steel Hellkite offer us ways to deal with other problematic permanents. Deathbringer Regent gives us a board wipe on a body, while Bladewing the Risen offers us a way to reanimate one of our big dragons if they get caught in the crossfire. We can generate hordes of tokens with Utvara Hellkite and Lathliss, Dragon Queen, draw fistfuls of cards with Dragon Mage and Knollspine Dragon, or take our damage output up to 11 with Atarka, World Render granting double strike to our brood.

Since our board can get so threatening so fast, we want to be able to surprise and overwhelm our opponents as fast as we can, so Dragonlord Kolaghan, Dragon Tempest, and Rhythm of the Wild granting us haste is extremely valuable. We can also use Vedalken Orrery to either grant us pseudo haste or to further take advantage of our huge amounts of mana if we are able to untap mid-combat with Bear Umbra or Sword of Feast and Famine. Even without the Orrery, these cards can allow us a further burst of firebreathing damage if we have double strike, or just let us untap to power out more huge threats in our second main. We also have City of Solitude to give us the freedom to win the game without interference from our opponents on the crucial turn.

Finally we have some broadly good ways to gain advantage such as one sided board wipes Crux of Fate, Kindred Dominace, and Plague Wind, value engines like Sunbird’s Invocation, and the potentially game ending Genesis Wave and Banefire.

As a closing note, there are a number of good dragons that didn’t make my cut that could be swapped in if you so choose. With how broadly powerful the tribe is, you can make anything from Shivan Dragon to Glorybringer work if you really want to. There is also a solid argument to be made for putting in basically ANY type of protection for your board, probably starting with Heroic Intervention, but this list is heavily based off of one of my personal decks and is meant to overwhelm with threat after threat. Generally this works but there is no guarantee, which is part of the fun for me. Along the same lines I have left in the dual lands which are in my own deck since I happen to own them, though you absolutely don’t need them. You can easily replace them even with basic lands given the number of ramp spells in the deck without any loss of power, and with a huge cost savings.