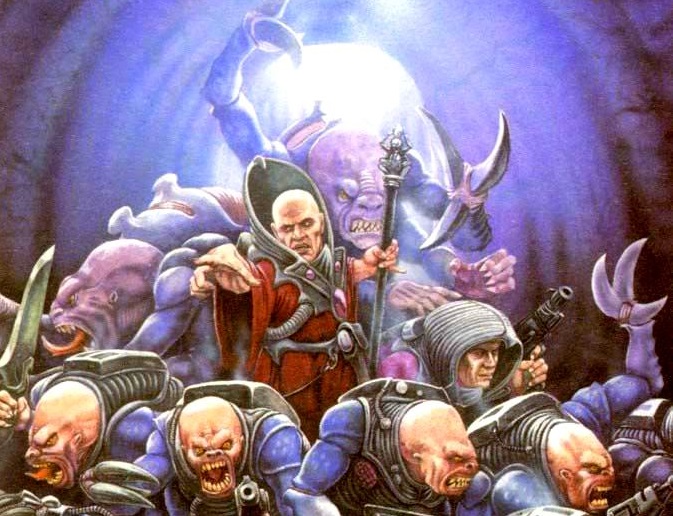 Like a lot of other people, I recently bought the Kill Team box. I had a very clear plan – I wanted the rulebook and the terrain, and that was value enough on its own. I might keep the Skitarii, since I had an Adeptus Mechanicus army anyway, but I was definitely selling off the Genestealer Cult since I had no need for them.

A few weeks later, here I am starting a Genestealer Cult army.

Usually I’m one of the more competitive-minded goon players, which is reflected in my current armies of choice, Imperial soup and Drukhari (Dark Eldar if you’re old). Partly this is driven by what’s good, and also by what I had to hand when I started playing again at the beginning of 8th edition; in 5th I had Space Marines, Imperial Guard, and Dark Eldar, with a smattering of other things like my weird, malformed Blood Angels. Since then I’ve added on to all of those, plus Adeptus Mechanicus.

Genestealer Cults, on the other hand, are decidedly non-competitive. In their index form they’re not much good, and their codex is a completely unknown quantity at the moment. They can ally in Imperial Guard (which is helpful!) and Tyranids, and the latter particularly is an option I’ll be exploring, but on their own they’re not up to much at the moment. So why am I choosing them?

Well, despite all the above, at heart I love painting and building just as much as playing, and GSC have some fantastic models. They’re a faction that didn’t exist when I last played, and have since gotten a whole line of modern plastics. That was the problem after buying Kill Team – after getting the sprues out and having a look at them, I really wanted to build and paint them. It also gives me an entry route into Tyranids, another army which I’ve always really liked visually but have never quite gotten around to playing.

Starting up Goonhammer and the Tale of Goony Gamers was the final nail in the coffin. We had a slow-grow project in the works, I already owned the models, and I could really take some time to try and improve my painting on this new army. What’s not to love?

I’m less inclined to build an army around the fluff than some of the other goons, but I do generally have some background written about the armies I play which helps inform their aesthetics. For the GSC, we’re looking at the Cult of the Promised Awakening.

The Story of the Cult

The Cult of the Promised Awakening took root among the mining communities of the Axeinos System, their downtrodden masses proving fertile ground for the cult’s doctrine of a future in which every man would be awakened by the divine light of a presumably risen God-Emperor. What Father Scylla, the Patriarch of the Awakened, had failed to disclose was that the divinity he worshipped was not in fact the Emperor, but the xenos beasts known as the Tyranids. Far from being servants of the Imperium, the organisation was a Genestealer cult, embedded into Axeinos long beforehand and coming to fruition in the early years of the Dark Imperium. A co-ordinated series of uprisings took place amongst the lunar mines, setting a beacon for Hive Fleet Charybdis, the parent hive of the Genestealers who had inaugurated the cult.

So there we have a short statement of who they are and what they’re about. In terms of colours I’m thinking of a combination of olive drab and a deep blue, with purple accents. I’m not 100% sure about the basing, but I’m thinking Martian Ironearth to reflect the mining world background of the army, and to offset all those blues and greens. I’m currently busy painting up a test model to see how this will work in practice.

For the opening month, I’ll be painting a squad of Neophytes from the Kill Team box, and some form of HQ. I’m very tempted to dive right in and pick up the Tooth and Claw box, since I can also make good use of the Primaris Space Marines for either my Crimson Fists or Blood Angels, but for now I’m trying to exercise some restraint and stick to the slow-grow theme – clearing out the backlog of things I already own is priority number one. Still, I’m looking forward to growing this force, and then failing to take them to any tournaments in favour of whatever the latest Imperial meta-build is, because at heart I’m a bad person.