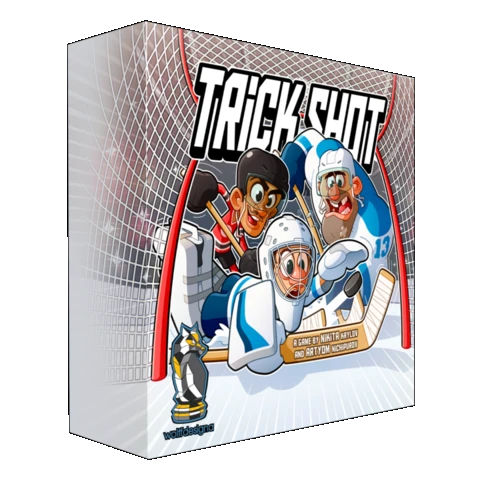 As with many of the authors here on Goonhammer, I enjoy gathering around the table to play a board game with friends. However, there are few things in this world that can get me more excited than NHL hockey. I’ve been a rabid fan of the Greatest Game on Ice since before I can remember. As a kid, my family rarely gathered around the TV as a group, since none of us ever wanted to watch the same thing. But when the Chicago Blackhawks game was on, we’d all crowd onto the couch in the basement family room to cheer them on. Some of my most vivid childhood memories were made huddled around that TV set, at first hoping against hope that the team could somehow get past Gretzky to win the Cup, then later wondering how many and what sort of animals we’d need to sacrifice to the Hockey Gods to give Chris Chelios the strength to drag the team into the playoffs despite the front office’s best efforts. Up until this year, if a friend invited me to hang out any time from mid-April to late June, the invitation would sound something like this:

“I’m going to a bar that’s showing the playoff game. Do you want to come?”

So when I saw Trick Shot up for sale, my wallet was out almost before I even knew what I was doing.

What is Trick Shot?

Put not-so-simply, it’s a two-player board game that aims to simulate the back-and-forth flow of a hockey game while keeping things manageable enough to be easy to pick up and play. Your goal here is exactly what you’re expecting: put the biscuit in the basket as frequently as possible. To get there, you’ll move the puck down the ice by skating and passing past and around your opponent’s team. This is harder than it sounds, though, as they’ll get the opportunity to react as the game goes on, letting them try to clog up passing lanes and check your puck carrier to stop them from moving. 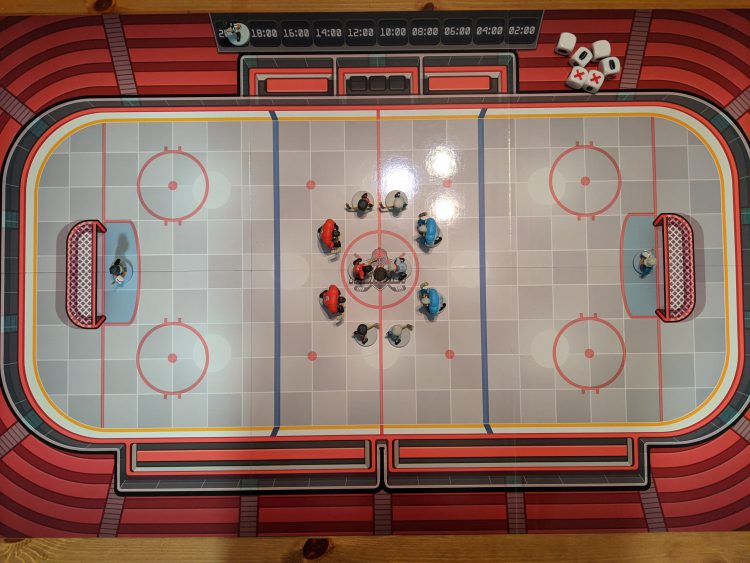 A Trick Shot game ready for the face-off

The basics are simple: take an action, then roll a die. If you rolled anything but an X, you succeed, and can continue to take actions. There’s a catch, though. Well, several, really: first, you can’t activate the same player twice in a row. That means that if your puck-carrier moves into position for a shot on goal, you’ll have to move at least one other player before you’re allowed to shoot.

The reason that matters is that every action you take on your turn adds another die to your dice pool, making it more and more likely you’ll roll an X as your turn goes on. This is the only limitation, though: your turn lasts as you want, assuming you’ve got the stomach to push further and the luck to avoid rolling any Xs.

The other bit is where the game really shines, though: if any of the dice in your roll show a blue arrow symbol, your opponent gets to move one of their pieces one space. This may not seem like much, but it can often be the difference between success and failure, as that Winger you were planning to glide past moves to block your path, that Defenseman steps up to check your puck carrier, or the Goalie shifts to take away that shot you just lined up. 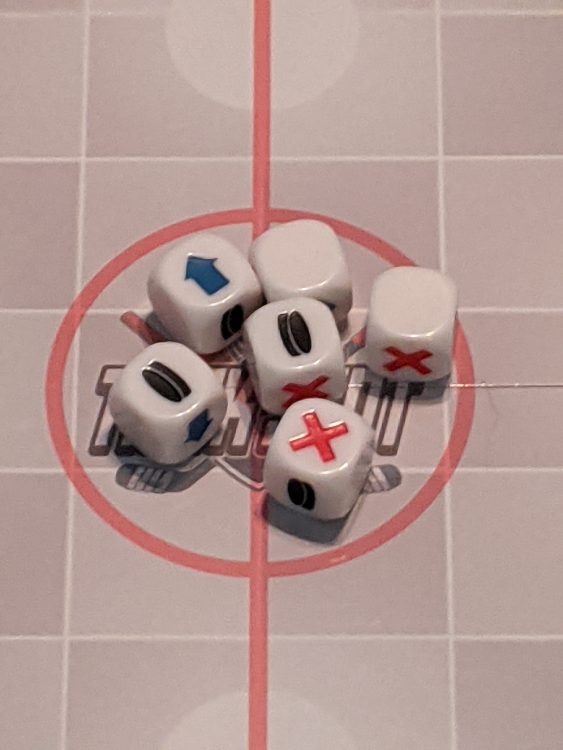 You can mitigate both of these issues, of course. The most direct way is to simply take fewer actions on your turn, exchanging explosive offense for the relative certainty that you won’t fail when it really counts. The other way is by spending one of your Stamina Tokens to re-roll all of the dice showing a symbol.

While you can re-roll any given roll as many times as you have tokens, you’re limited to a paltry 3 tokens. And they don’t recover automatically: in order to get your team’s stamina back, you’ll have to make a Line Change. Unlike real hockey, you won’t have to dump the puck and switch your players out. However, you will have to end your turn voluntarily before you fail a roll and are forced to pass it. As you play, you’ll be trying to find a balance between risking it all on taking additional actions and recovering your team’s stamina so you have re-rolls when you need them. 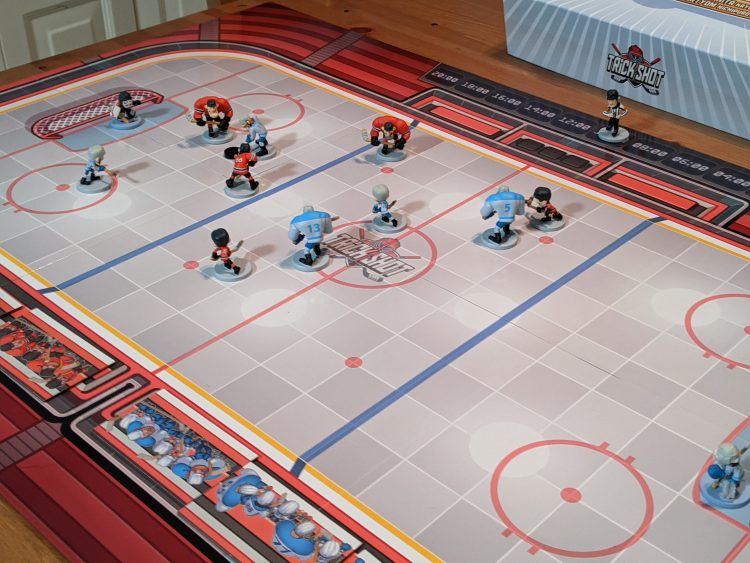 This creates some really tense moments as you push your luck against the dice, hoping you’ll roll enough blank results to make re-rolling into success reasonably possible, watching as your team slowly tires out and becomes less and less effective. It also does an OK job of simulating the flow of an actual hockey game, forcing you to look for situations where handing off the initiative won’t be completely disastrous so you can switch to a fresh line. It also means that a team pulling a long shift is less reliable than one with a fresh line, and rewards teams who regularly rotate through their roster with much more reliable turns. At the same time, when you find yourself in need of some late game heroics, one of your players stepping up in the clutch is always possible, however unlikely. 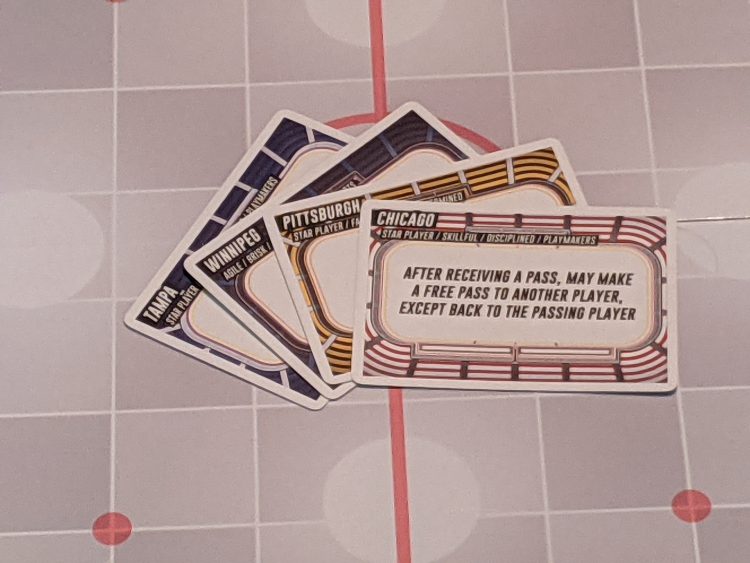 Arenas for four of the teams on offer.

You can also choose an Arena Card which gives a special rule to both teams, one for each NHL city (including Seattle, thus saving our friends in the Emerald City from the terrible fate of Vancouver fandom). Each of these cards also includes a suggested set of four Line Cards that are themed around that city’s NHL team. Boston is Hard-Hitting, Tough, Disrupting, and Face-Off Masters, making them a very physical and defensive team that benefits from their Arena ability, which allows both teams to restore 1 stamina before they throw a hit. Washington, D.C. has the Skillful, Agile, Offensive, and Snipers Line Cards, letting them move the puck almost with impunity, but at the cost of an Arena Card that prevents the team with the puck from making a line change – Alex Ovechkin, if your ears are burning, now you know why. And Chicago has the Star Player, Skillful, Disciplined, and Playmakers lines, letting them move the puck nicely on offense but maintaining a two-way defense that can be frustrating to play around, especially combined with their Arena, which lets a player who receives a pass immediately pass without rolling, so long as they don’t return it to the passing player.

The game’s not perfect, though. First of all, I bought the pre-painted edition, which includes a Center wearing sweater #99. This is sacrilege, and is Not OK. 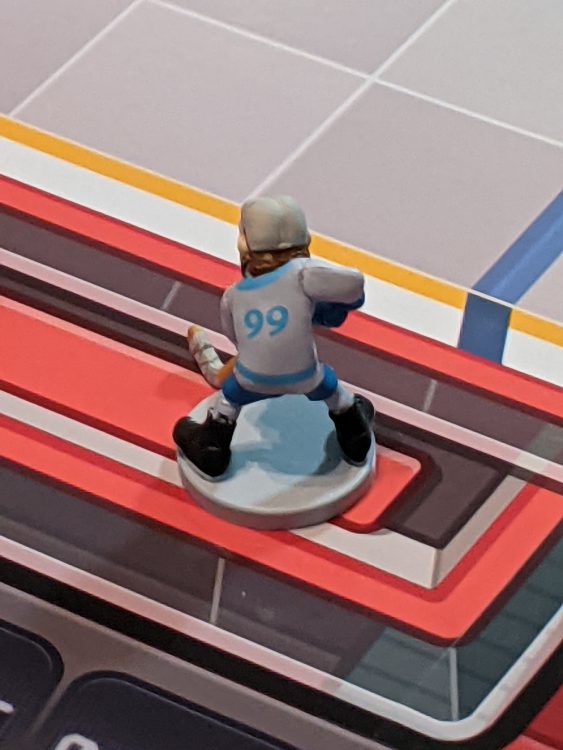 The dice-based nature of the game means it can be pretty swingy. Quick goals aren’t uncommon – due to the geometry of the initial setup, scoring within 5 activations of the face-off is possible with a little luck. It’s pretty unlikely – you’re more likely than not going to roll at least one X or reaction starting on your 3rd roll, not counting re-rolls – but I’ve seen it happen in multiple games. That can be a little demoralizing, but quick goals are a part of hockey, and having the opportunity for seventeen-second heroics honestly feels right (despite how much I hated when it happened to me).

The rules for penalties are also a bit out of place. The additional risk from taking an action that can’t be re-rolled if you fail it is interesting, but the way they handle putting the offending player in the penalty box seems perfunctory at best, a rule included because they felt they had to, not because it really works that well. Unless their intention was to make you feel shame, in which case: Mission Accomplished.

Finally, I sort of wish they’d just dispensed with the three periods in favor of a single uninterrupted game. I know that the third period is one of the things that makes hockey really unique, but interrupting play and just resetting the board takes me out of the game every time. I understand they were trying to stick as close to the real sport as possible within certain constraints, but this is one that could afford to have been jettisoned. [Editor’s Note: This devotion to simulation is a common board gaming bugaboo. You can spot good developers by their games that recognize when to abstract]

How does it stack up?

First off, let me be clear: This game is not Blood Bowl, or Dreadball, or even Guild Ball. It’s a much lighter weight game than any of those, and that’s fine. If you’re looking for a robust league system that you can use to tell the story of your team’s rise through your local league, this isn’t the game for you. And while the Line Cards do offer some distinction between teams, you’re still working with more or less the same pieces, which means that the difference between your and your opponent’s game will be relatively minor.

It’s also not nearly as chaotic as those games. The “physical” game, such as it is, is restricted to “hitting,” which only moves your target one space and might result in your player taking a penalty. And while rolling an X does end your turn similar to a turnover in BB, it typically feels less disruptive since you’re actually expecting to see it after a couple of rolls. But if you’re looking for the sort of robust story-generating engine that a game like Blood Bowl offers, you won’t find it here.

None of that really matters, though, because it’s not trying to be any of those games. This is a game made by people who love the sport and want to share it with the world, and that shows through in nearly every aspect of the game. The flow of play is evocative of the rules of the sport without getting bogged down in minutiae, and the rules are simple enough to pick up but leave room for the clever plays and tense moments that make the game so much fun to watch. Everything in this game – from the core mechanics, to the visual presentation, to the fact that the “suggested” team for each city is instantly recognizable – is just dripping with love for the sport. It also doesn’t hurt that it’s a lot of fun. 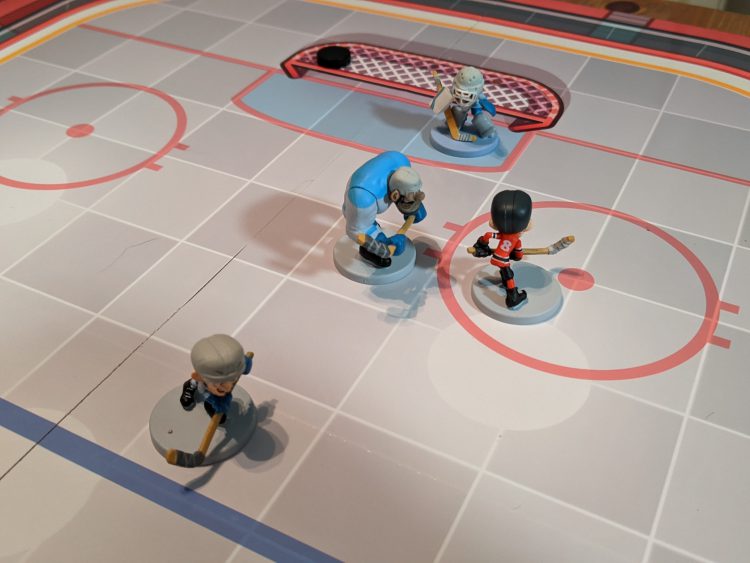 He shoots, he scores!

If you love hockey as much as I do, you owe it to yourself to give this game a shot. It’s not life-changing by any stretch of the imagination, but it’s quick, easy to learn, and fun to play, and these days, that’s more than enough reason to try it. And even if your taste in sports isn’t as well-developed as mine, it’s worth giving it a shot. Games take around an hour to play, and learning from the 12-page illustrated rulebook will only add about 30 minutes to that.

Unfortunately, the game is a bit hard to get your hands on at the moment. It was a Kickstarter campaign, which was how I got my hands on it. However, the designer is planning to put it up for sale sometime this month on their website. If you want to get a copy, you’ll probably want to act fast.

I’ll be honest – I have yet to actually win a game of Trick Shot, but I’m still excited to play it again. And if that’s not an endorsement of a game, I don’t know what is.