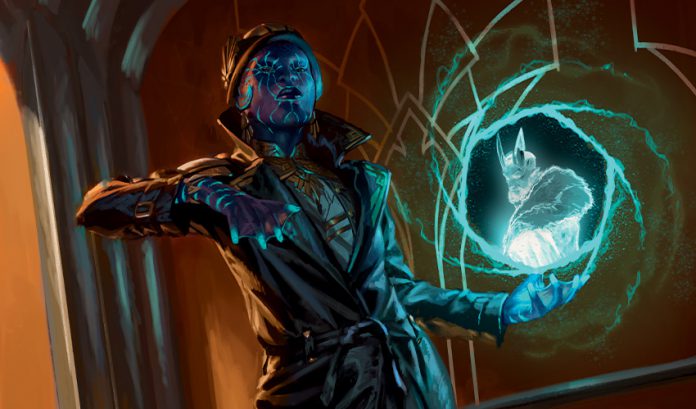 In our Unstable Mutation series we look at the prerelease decks of various sets, talk about their contents, and talk about how to improve them taking them from an off-the-shelf disaster into something that’s worth bringing to the table on a Friday night. This week we’re looking at the Obscura Operation deck from New Capenna.

This is decently powerful for these colors. There’s lots of creatures you really do not want to automagically connect with your face, off the top of my head, Blightsteel Colossus and Phage the Untouchable both fit the bill. Triggers are arranged nicely so as to make something unblockable and get bigger, than give something else double strike. That being said this is a punching face commander with no real card value ability that costs 4, so that’s kind of a tough sell unless you have a way to guarantee a creature that you can get a lot from connecting.

Cool card, got some serious keyword soup going on, almost comparable to Atraxa, with netting you potentially a lot of tokens, Flying, with Ward 3, and I think the most interesting part of this card is the additional vote. WotC has been leaning into the multi-player aspects of commander for a while, so to see another “extra vote” is kind of neat. Making a fun voting deck seems pretty fun actually, though 6 CMV is quite a bit.

This is kind of a mini Brago, King Eternal but with an awesome draw trigger tacked on. 5 mana is so much though, to get an effect like this going, so generally probably only going to be worth it if you have a lot of ETBs that will generate value for you.

This is constantly white’s dilemma, having to help someone else to help yourself, which isn’t necessarily bad, but to make this card payoff you need to have some loop you are setting up. The most likely target I can see is a powerful one – either Animate Dead, Dance of the Dead, or Necromancy, letting you cheat out a truly huge create while only giving one of your opponents a 3 or 4 CMV permanent, which might be a worthwhile trade off.

This is probably one of the most important cards out the set, very well themed for a “group hug you to death” sort of deck. Punishes your opponents for getting a lot of draw or land drops, but you can manipulate those situations. For example, cards like Mikokoro, Center of the Sea, Temple Bell, and Folio of Fancies makes each player draw. Combined with something like Smuggler’s Share, you are getting superdraw yourself. If you’re going to be giving away card draw though I’d highly recommend also punishing your opponents for drawing, cards like Underworld Dreams would be perfect.

This is another totally unblockable whatever, there’s some interesting ways to turn this into interesting things. If that is what you are trying to do, this is a great card for it.

So, more phasing cards are wonderful, but adding more neat ways to protect your creatures at instant speed is pretty cool. Connive over and over on top of it is pretty powerful card selection, and also triggers draws if that is something you want to do.

This will shut down a lot of combos midstream, also just remove a creature from combat as it becomes a clue. The obvious target is a commander, though they have to pay 2 to sacrifice it. Split-second does a lot of work here, since this is probably weaker than prior powerful disablers Darksteel Mutation and Imprisoned in the Moon. Both of these are very hard to remove, whereas this lets you sac your whatever for 2. I think it’s kind of neat you can actually use this to get out from under being land or a bug (or a tree-ent or an elk or whatever).

Mask of the Schemer

Well Connive X is a powerful ability, and this will rapidly get out of control, if you can attack multiple times or need some kind of card selection, but 5 mana is really a lot to get some draw/discard going for +1/+1 counters.

So did they put like every extant mechanic in this deck or what is going on here. Anyway, escape returns, with a neat twist whereby if the skyway robber connects you get to cast things for free. This is potentially really powerful, obviously, you’d want to cast something insanely expensive like Enter the Infinite. However, that’s a pretty telegraphed move on a 3/3 flying body. So most likely they will just kill the robber before it can connect.

I really like this card, it’s flexible, hitting creatures and Planeswalkers, pretty unusual, and then lets you convoke to get the mana value down, and on top of that you get to connive. Black often wants card selection and GY dumping, and doesn’t usually get that much access to impulse-like effects, so this is a valuable addition.

I love this for the interaction with cards like Syr Konrad, the Grim and just grave dumping and dealing damage that way. 4 for a 3/1 with deathtouch is a bit pricy for the effect though.

Hrm, I haven’t seen Cipher in a while, let’s dump it into a blue precon. But returning a creature to the battlefield tapped is a really powerful ability. Without it being tapped it would be pretty easy to put together a combo with cards that create extra combat steps. Nonetheless returning a creature each time you deal combat damage is pretty powerful if you can land it.

Neat card, neat art. Extort and this trigger on a 5 mana enchantment is okay, fun for aristocrats decks, especially given the new background that triggers commanders on creature deaths and artifacts.

This is flexible but all the modes are pretty mediocre, at 4 mana I don’t see a ton of use for this unless you know you will want to be using Pestilence or something specific like that.

I think this card is just bonkers great. It turns your discard lands into a bonus treasure, and lets you go off sooner, can also be used to make even more creatures if you need them for aristocrat triggers, and has it’s own draw/discard ability when needed. Really solid for 1 mana.

Out of the box Obscura Operation is a go sort-of tall attack deck, with a lot of creatures that can’t be blocked and creatures that reward you for dealing combat damage. And then there’s a bunch of big, semi-beefy creatures at 5 MV + which means you’re definitely tapping out every turn, which is nice because the deck has very little interaction, and so the hope is that via your card selection you’ll be able to kill your opponents with these creeping threats you can’t protect. Kamiz should let you connive every turn, and his double strike is potentially dangerous for doubling combat damage triggers, some of which can be pretty brutal.

Unfortunately without a lot of reanimation or ways to get things back you need to hard cast everything, and the deck will do okay because it has some inherent card selection, but it will struggle to close out games since your threats are ponderous and telegraphed.

This is the standard decklist:

I can see a couple of ways to rebuild this – the first one is to focus on the unblockability and double-strike triggers. Run cards that really punish your opponents when they connect, or that help you a lot. Sword of Fire and Ice, Lord of the Void or Silent-Blade Oni can be pretty brutal. Using the discards off the connive would let you dump these big fatties to your graveyard in order to cheat them out.

The second way would be to focus on the discard abilities, add more of those, and use cards that want to be discarded, like madness cards.

The third one that comes to mind is a ninja deck. Just, ninjas. Make something unblockable, and put out a ninja. If you use things with nice ETB triggers, even better. The next turn you can turn around and make the ninjas unblockable.

Ultimately I chose option number 2, since WotC has printed another way to get value from discarded cards, and most of the madness cards are usually played in Anje Falkenrath decks. There are some decent blue madness cards, but the majority still live in black. The rebuilt version has much bigger threats and ways to get them back out, as well as more utility creatures, and doesn’t try to spend a lot of time casting mid-range beaters which aren’t that impactful. There’s also a significantly upgraded land base, with several additional 2 cost mana rocks so that you can actually start playing the game quickly instead of playing land, go for several turns, or even worse, land, mediocre creature; land, slightly more expensive mediocre creature; which seems to be the theme of most wizards precons. It’s as though they envision people playing Commander:War, possibly the worst game that used a poker deck.

In any case, quickly cycling through your deck will let you dump huge threats and reanimate them quickly, then return them as unblockable creatures. If you can get other creatures big enough then you can give combat damage triggered ability delivered like Medomai the Ageless double strike and take lots of additional turns.

All in the all the deck should play out much more smoothly, letting you discard resources you don’t need and select cards to counter your opponents threats or protect your own.

Tomorrow we’ll be back to offering our opinions on Baldur’s Gate, Commander 2, Electric Boogaloo, the sequel. But if you’ve connived (haha) a better Kamiz deck or maybe a Raffine, Scheming Seer deck let us know in the comments.