This week we’re finishing out our review of Crimson Vow by taking a look at the two Commander decks Wizards is releasing for the set – whether they’re worth it, and how you can expand them. Today we’re talking about the set’s Black-Red Vampires deck, Vampiric Bloodline.

Blood tokens are a new mechanic, which wizards of the coast may be keeping around in a similar fashion to treasures, clues, and food, though blood tokens are mostly Rakdos-themed, and seem very connected to vampires, whereas treasure, clues, and food are sort of all over the place with various colors generating the tokens in the ways that sort of align with the color pie and philosophies of the colors.

There are only 35 cards that refer to blood tokens so far. Though like treasure, clues, and food, they have a built-in ability to be used, pay 1, tap the token, discard a card, and sacrifice the blood token, and you draw a card.  So draw/discard is pretty on theme for red, which mostly has two kinds of card draw, either exiling to play/cast or else discard as a cost to draw, and it’s mostly closer to card selection generically, though there are quite a few ways to get advantages from having discarded cards, either extra draws or punishing your opponents for the privilege.

Of the 35, 12 are red, 13 are black, 3 are red and black, and 3 are artifacts or lands, there’s a token blue, black green, white, and white/red card producing blood tokens.

Madness has a similar distribution, with 51 of the 62 madness cards being either red, or black, or red and black.

The two seem very much designed to work with each other, though WotC hasn’t printed too many madness cards in a while, the “madness commander” Anje Falkenrath is indeed a red-black vampire as well.

To be fair to Vampiric Bloodline, it’s not actually a terrible deck out the box.  The usual problems apply, it needs better mana rocks, better instant speed interaction, less creatures, and more good dual lands and some fetch lands and less bad dual lands.  And nobody needs a temple of the false god, especially not a deck built to cheat out big fat vampires. 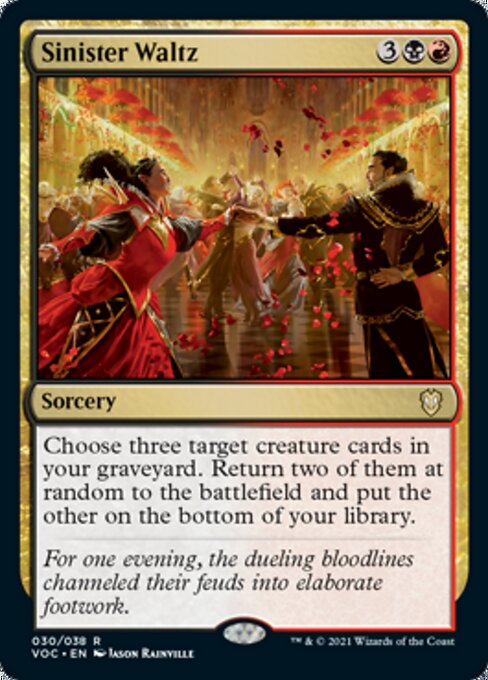 5 mana is a lot to reanimate, especially if you aren’t necessarily going to get exactly what you want.  On the other hand, there’s plenty of circumstances where you can get what you want need with any 2 out of 3 creatures, or simply select for 3 value.  The fact that you can also pair this up perfectly with Buried Alive is pretty nice.  Bury 3, reanimate 2 for 8 mana is a bit steep, but if it wins you the game, then obviously it’s worth it. 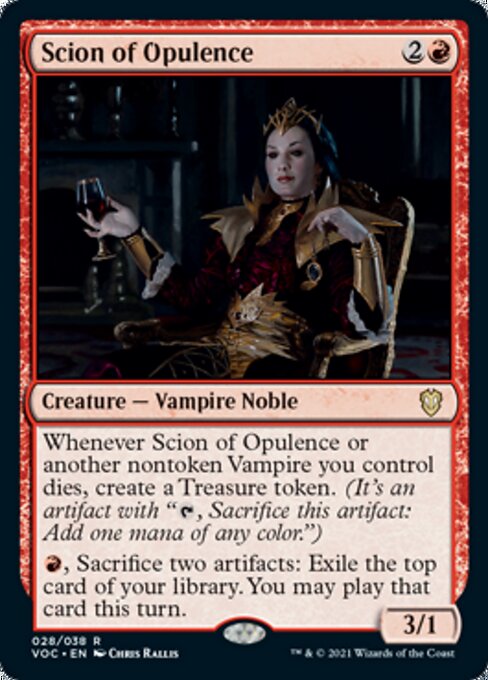 This is an extremely solid card, generating treasures and letting you get value out of artifacts is great.  Both red and black have a lot of cards that do things “like this” and running all of them in a deck will also let you just generate a lot of value coincidentally.  The interaction with Oathsworn Vampire can be particularly delicious.  You can also see how this might let you play your whole deck with Prosper, Tome-Bound with a couple other enablers. 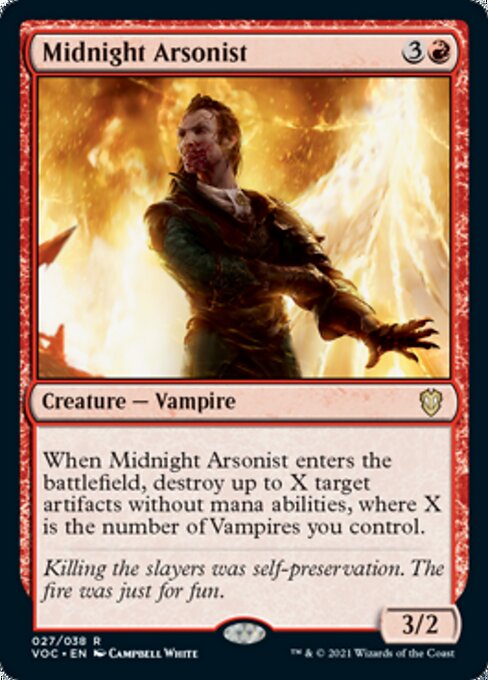 Potentially this could be a huge swingy card, it’s essentially a vampire creature that is close to a Vandalblast, it is really nice that it’s “up to” so you can always choose politically not to destroy certain artifacts, or be forced to destroy your own. 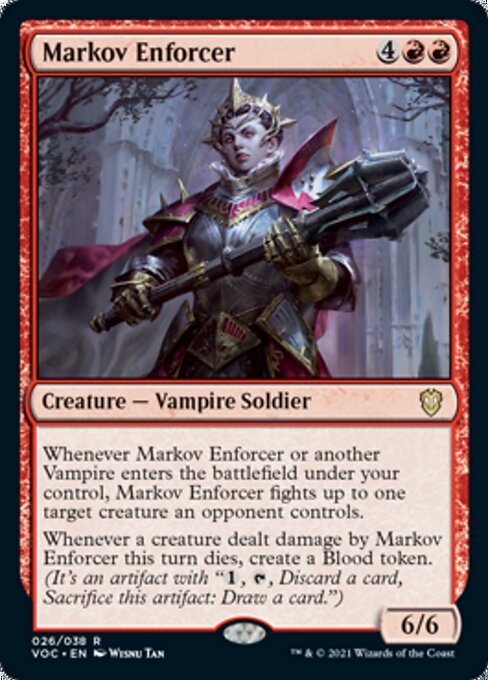 Fighting on a trigger is a solid ability.  A 6/6 for 6 isn’t a particularly strong stat block, but you’d generally be planning to cheat out something like this in any case.  Generating Blood Tokens goes right in line with that. 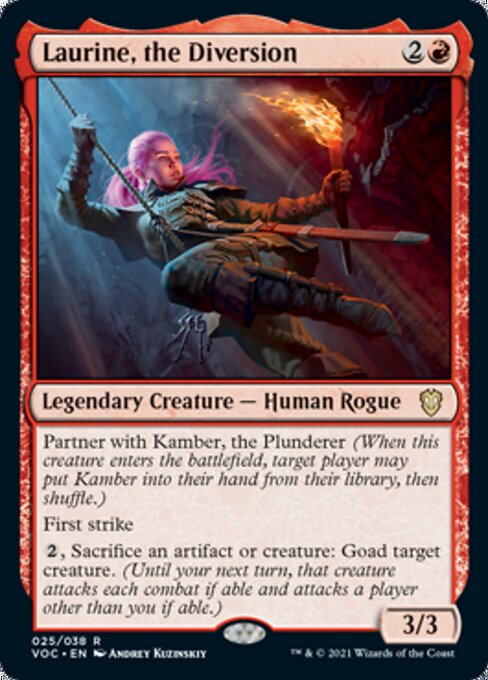 This is a neat partner with, though Laurine is the weaker of the two.  I like the idea of goading other people’s creatures in multiplayer though often they can find ways to tap them down. 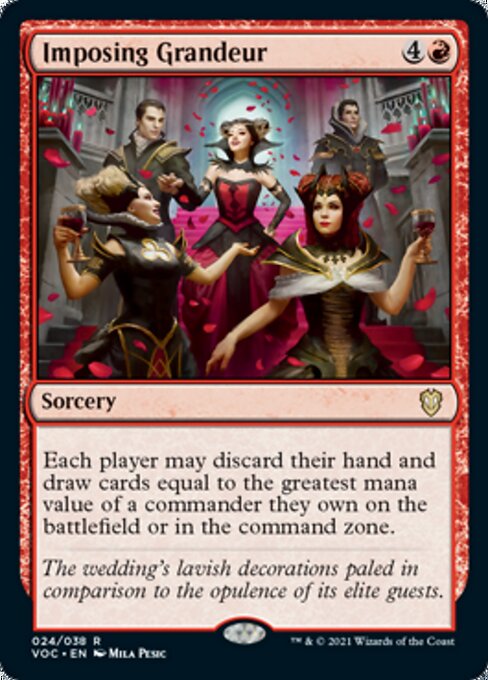 I really like the idea of this card, or at least the inclusion of the mechanic around commander cost.  5-mana is a bit much for something that has some grouphug aspects to it, but thankfully it does at least penalize overpowered partners like Thrasios, Triton Hero.  Potentially this could be a big card for red, especially given that Dargo, the Shipwrecker is pretty solid, and Godo, Bandit Warlord is also quite a high cmc commander in the same colors.  Maybe the most hilarious power combo with this, in my opinion, is Reaper King. 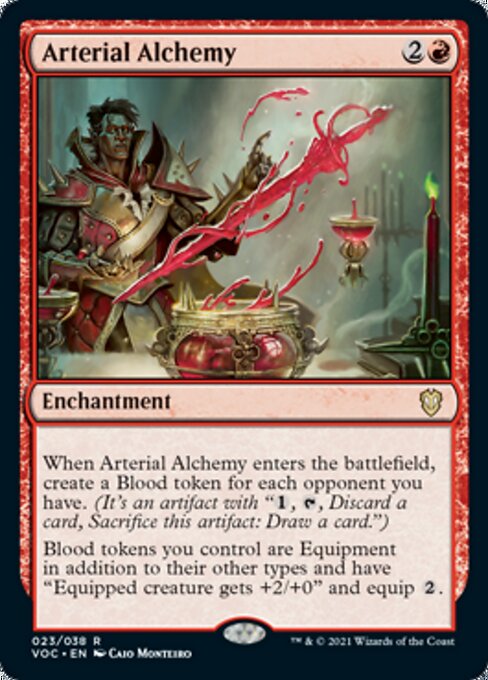 I love the idea of turning things like Blood Tokens into equippable rocks, and I think you might be able to do something really crazy with this in Boros decks, since some of the commanders care about how many artifacts you have or how many equipment you have and can equip for free.  Akiri, Line-Slinger with Arden, Intrepid Archeologist would let you instantly equip all 3, for a total of +9 power at a cost of 3 mana, which is pretty good.  It’s just odd to see something like this in a deck that’s almost totally thematiclaly different. 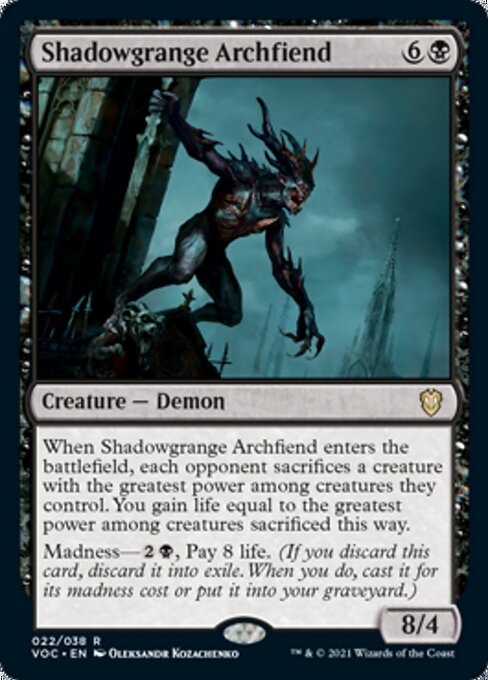 I think this card has enormous potential.  Yes, you’ll lose 8 life, which is a lot, assuming you madness it out, but it is still and 8/4, and forcing your opponents to sacrifice the greatest power creature they control is pretty, frankly boss. 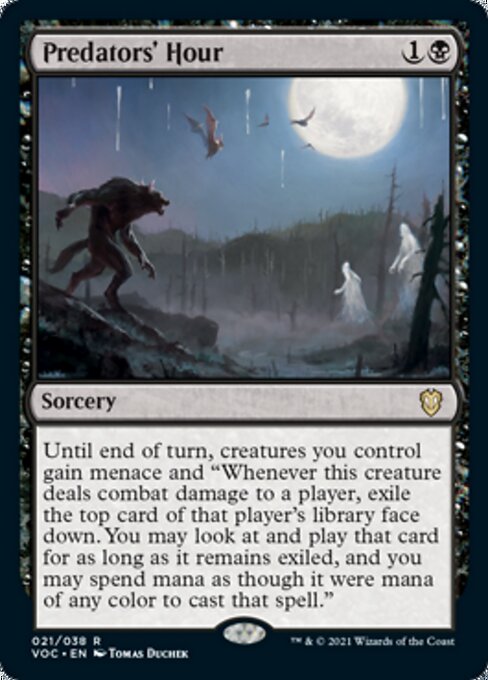 This is a strong card, potentially generating a lot of draw, exiling valuable cards off your opponent’s decks, and giving menace. 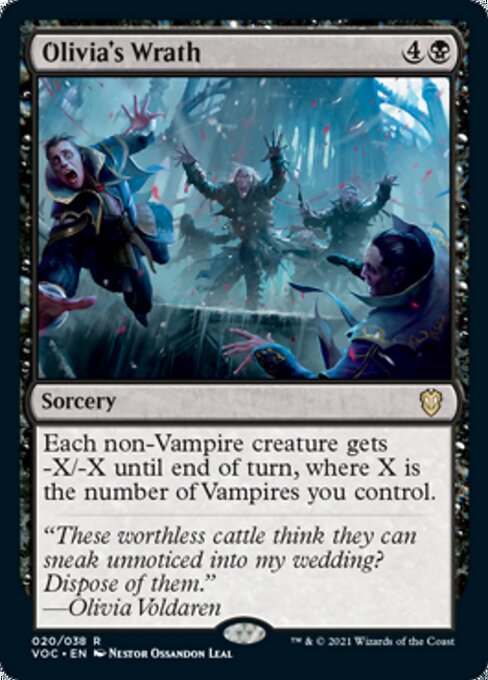 I like these “tribal-focused” board clear effects, and this is one is totally fun for a vampire-themed deck.  5 mana is a lot, but for an asymmetric board clear that’s a hell of a haymaker. 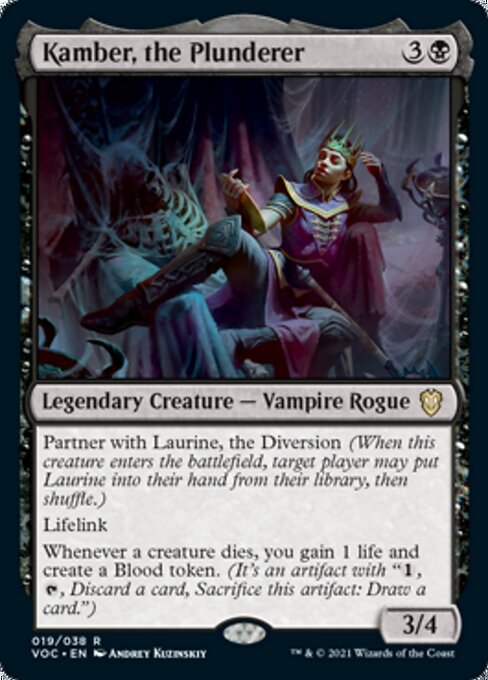 So this is potentially really powerful, even game-winning, getting extra value from creature deaths, but this one includes non-tokens and creatures you don’t control, which is a lot. 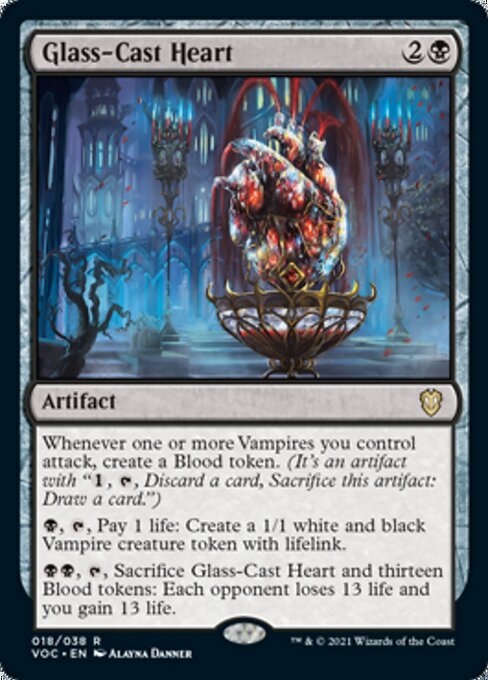 This fits very well with Strefan, and also lets you generate vampires, fodder for sacrifice effects and other things that care about vampires.  I think in vampire-themed decks or creature death decks this is certainly a playable card, but you’ll need things to slow the game down like Rule of Law or other stax type effects. 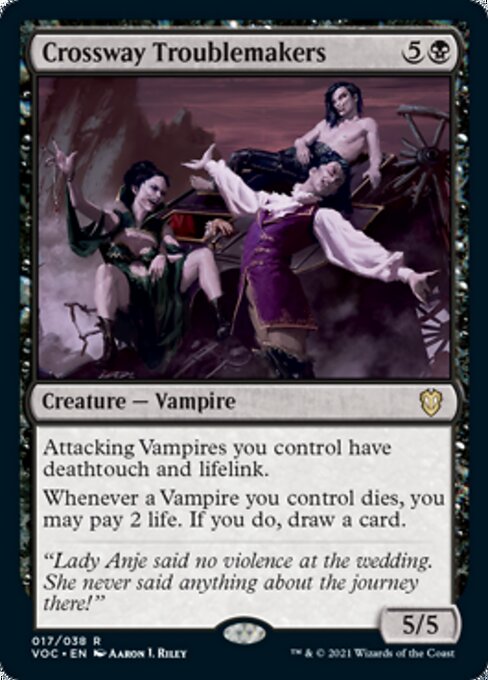 This nicely doesn’t care about the vampires being non-token, which is huge.  Giving lifelink and deathtouch is neat and will let you afford all the card draw. 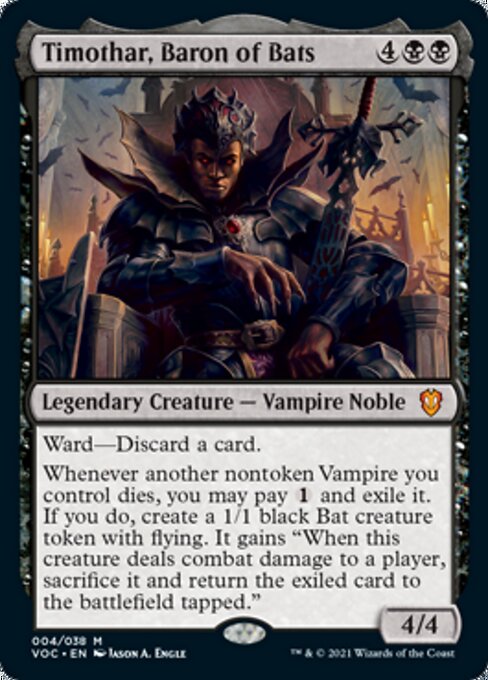 This is a really neat effect, and potentially has your big fatties recurring, but it’s really pricy, for 6 mana you can do a lot of things, and this requires you to then pay even more mana, and then get the 1/1 bats through.  Thematically it’s really neat, but it just seems like too many steps to go through for recurring vampires. 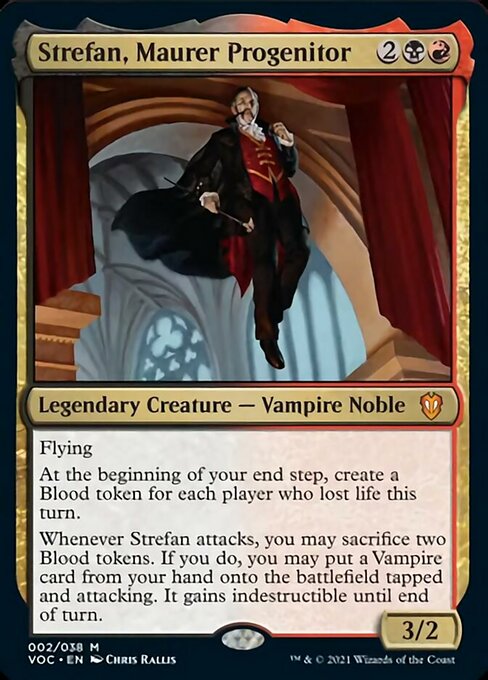 I think this is a solid potential commander or just a value card in another deck.  Generating several blood tokens per round that will let you discard cards to draw is in and of itself quite valuable, letting you do neat madness things, get sacrifice triggers, get draw triggers, etc.  Strefan is actually a quite solid combo enabler for decks that operate with Rakdos colors.

Rebuilding this deck is really a question of just refining down what it does, and focusing that into a win condition.

There are really a few ways you could go here, one is to focus on blood tokens, madness, creating treasures, and blood tokens, and punishing your opponents for it.  Running Reckless Fireweaver, Marionette Master, Disciple of the Vault, and Prosper-Tome Bound in the deck run goofy stuff like Asmoranomardicadaistinaculdacar and mostly use Strefan, Maurer Progenitor to get out vampires that generate artifacts, and then build in a sub-theme of life loss for your opponents.

Personally, I think it’s a bit more interesting to make a deck themed around big vampires and using his ability to summon them for free since we’ve done artifact-themed token decks repeatedly recently.  The cards this enables are also generally cheaper, in terms of actually purchasing them.

With a deck built around a commander like this, you want to rush out your commander as fast as possible.  Your ideal scenario would be a turn 1 drop that can attack, if it wasn’t vampire tribal it would be to drop in some of red’s goblins, like Ragavan, Nimble Pilferer, and Impulsive Pilferer.  Lacking those there are some decent 1-drops but trying to force tempo in a deck that is limited to vampires is probably not something to obsess over (though Changeling Outcast would also be quite strong).  In any case, upgrading the mana base will go a long way towards getting Strefan out faster and swinging faster.  There’s a special exception to the “no 3 cost mana rocks” rule for Cryptolith Fragment in this instance since it will let you generate Blood tokens automatically off Strefan and is thus worth the 1 extra mana.

There’s really not a hugely complicated plan with a deck like this, just ram out Strefan and start swinging as fast as possible.  Put out huge fatties each turn if you can, lean into ones that let you recover cards or generate more resources since players will almost certainly have to deal with your board state or risk being overwhelmed in a couple of turns.

To really focus the deck you’d want to lean into a sub-theme, like triggered life loss or sacrifice/artifacts entering the grave triggers, and then use blacks excellent tutor suite to get the vampires that generate what you need.

Nonetheless, just cheating out huge fatties ought to be pretty fun, and tuning the deck after your interact with your meta will let you know what more focused direction you’d want the deck to go – sacrifices and death triggers, or lifegain/lifedrain triggers, or really focusing in on the blood tokens, and possibly cards like Reckless Fireweaver or Madness cards.

Here are the cards I’d cut:

Here are the cards I’d add:

And here’s the embedded decklist at moxfield: