This article was originally published on October 9, 2019. However its content is still valid today and if you haven’t given the game a shot yet we would implore you to give this a read, then give playing with tiny titans a shot. You won’t be disappointed.

Welcome to Goonhammer’s series for aspiring Titan Principes. We here at Goonhammer’s own Collegia Titanica know that Adeptus Titanicus can seem intimidating to players unfamiliar with its particular quirks, but this series aims to equip you with everything you’ll need to play out epic clashes on the battlefields of the far future with your very own Titan Battlegroup. In this series, we’ll be walking you through how to build your battlegroup and command it to glory, including everything from which Titans to include and how to equip them, through to how to command them on the field of battle to secure ultimate victory. Today, we figured we’d begin by introducing you to this amazing game and helping you get started. Future articles in this series will cover the various list-building options on offer and finish up with tactical advice that will help you get the most out of your own god-engines.

So what is this weird game you want me to play?

Adeptus Titanicus is a skirmish wargame that pits battlegroups of titanic bipedal warmachines, each carrying absurd amounts of firepower, in epic clashes with each other and, more often than you might expect, the surrounding structures and other scenery. It combines crunchy, tactical gameplay with a dash of unpredictability to create an experience that is as close to being reasonably described as “cinematic” as a tabletop wargame can get. You’ll carefully plan out your advance across the board, managing sight-lines and taking care not to expose your vulnerable flank to your opponent’s big guns, all the while working to set up that critical shot that will score you an engine kill. And even if you miss, you’ll probably blow up a nearby building or something.

In addition to moving your models around the battlefield, each Titan comes with a Command Terminal that puts all the information you need to know in order to use it in one handy place, and also keeps track of the damage it’s taken to its head, body, legs, and weapons. As your Titan takes damage, it will slowly become less effective as its weapons disable, its locomotors seize up, and its crew are wounded and killed, until eventually an attack strikes home and it’s finally destroyed. But Titans don’t go down without a fight, and you’ll find that they can soak up an incredible amount of damage before they die. Games of Adeptus Titanicus combine a spectacular flow of play with a pleasantly crunchy ruleset, and you’ll quickly find yourself drawn into the flow of battle and left hanging on every die roll.

Why should I play Adeptus Titanicus?

For my money, AT is one of the best games Games Workshop have ever released, bringing together many of the best parts of tabletop wargaming to create a truly amazing final product. I could go on at length about how much I love this game, but if I had to boil it down to three points, I’d pick these:

Alright, I’m in. What do I need to get started?

Before this year, there were a few different approaches to get into the game, although with the release of the new Starter Set in Feburary 2020, the answer is simple. Get the Starter set

If you follow this advice, you’ll have a solid starter force that you can easily expand to around 1500 points, which is roughly what you’ll want to have on hand for most pick-up and matched play games. 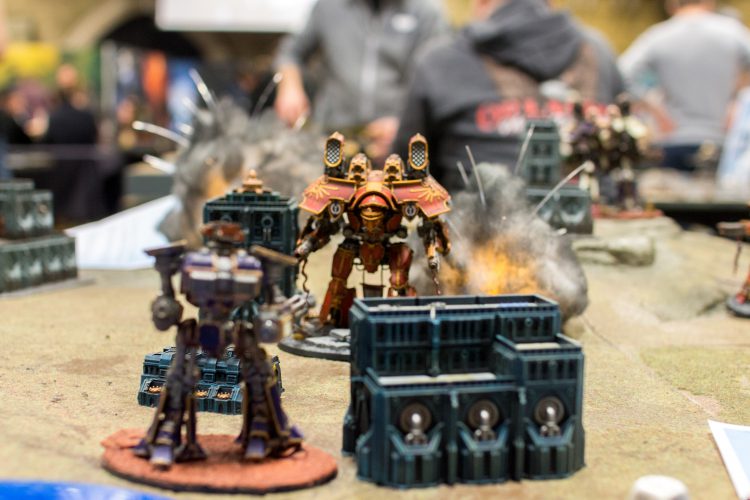 Titanicus has five phases, each of which have multiple steps. In later articles, we’ll dive more into each of those phases and give some pointers on how to command your Titan Battlegroup to victory. For now, here are a few key points to pay attention to:

This is by no means an exhaustive list of tips, but you will notice a common thread here: have a plan for how you intend to approach the game, and make sure the decisions you’re making play into that plan. For your first few games, we recommend a plan that looks something like this:

This is a very bare-bones outline, but will help you think about the best way to equip and position your Titans so you can bring the right weapons to bear on the right targets. For some more detail on which weapons fit in what category, Warhammer Community has an excellent post about these three categories and some examples of weapons that belong in each.

Where do I go from here?

Now that you’ve played your first game and gotten a feel for the system, it’s time to expand your battlegroup to add more options and let you play larger games. Expect to be able to field 1500 points for most pickup games – the rules in the core manual allow for up to 2500, but even 2000 points is pushing it on game length – that’s a serious time sink that will take several hours to play through. The rules also allow for an underdog bonus – if you have fewer points than your opponent, you get some help including additional stratagem points and other benefits. These bonuses can be helpful, but you should probably try to stay within about 200 points of your opponent – any more of a difference between forces tends to make for an uneven game that neither player will find satisfying.

As far as what to look for next, there are many ways you could expand your collection. In the coming weeks we’ll go over the various options available to you to help you decide how to build out your collection, including the various Titan Legios, Maniples, and other features you can use to build the force of your dreams. These rules can be found variously in the Core Manual that came with your starter set or any of the supplements that have been released since such as Titandeath, Doom of Molech, Shadow & Iron, and the new Loyalist Legios book. We’ll go into more depth on these in the future as well.