Hello fellow Goonhammer readers, My name is Andrew Nguyen, also known as The Terrain Lord at my local store. With the help of the other founders of Plastic Crack Anonymous and Goonhammer Contributor Norman Greenberg, I will be running the Huzzah Hobbies local campaign. This will be our fourth campaign and we are very excited to be a part of the global crusade. 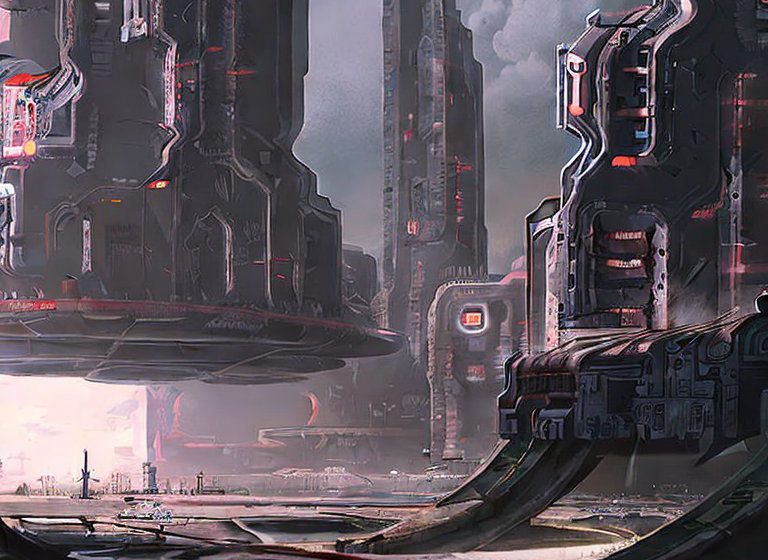 The planet of Perplior is an armory world, warehousing arms, food, and armor and supplying planets across the sector. It is relatively unremarkable compared to other worlds within the Ultra Vernor Expanse. The machinations of the local Tech Priest Dominus ensure that the transit and logistical infrastructure run like a well-oiled machine. For the Imperial inhabitants, it is a time of strife. After the previous governor’s mysterious death, Titus Plantowski has usurped the title of Planetary Governor of Perplior without election or discussion.

What draws travelers and merchants to Perplior is not the planet’s resources or location, but what orbits around the planet.

Orbital Station Pumilian is an enigma. In truth, it was a Votann generation ship that was discovered and repaired by early colonists. The ship’s crew were never found, and its details and origin have been lost to time. Within its bulkheads, poorly lit and coolant dampened halls host a diverse population of hangers-on, desperados, and, strangely, those of mercantile intent. Commerce is alive and well on Pumilian, where all manner of goods and services can be bought and bartered. Perplior’s planetary merchants have been known to fight tooth-and-nail, in a fiduciary sense, for an entry into the lottery that determines whether they may travel to the station to set up their shop for a mere week’s time. Their wares are more valuable to travelers, and more importantly they may also find goods unheard of by their normal, planet bound clientele. Here, even Xenos agents are found trading with Imperial personnel in the deepest and darkest reaches of the station’s bowels. In almost any other part of Imperial space, this would be dealt with swiftly and without mercy. Rogue traders facilitate most of these supremely heretical transactions, and act as intermediaries due to their inherited Warrants of Trade. Due to the plethora of intelligence about the subsector that is gathered from the inhabitants and visitors of the orbiting station, Titus has chosen to ignore the corruption and reports of Xenos activity surrounding the massive structure. The governor’s coffers are filled with the fruits of the planet’s tithes, and his cabinets are stocked with comestibles of rare vintage, some sourced from, perhaps, illicit origins. Is his affiliation aligned with the Imperium of Man, or are there other forces at work influencing Titus?

Space Hulk appearances are not an uncommon occurrence around Perplior for unknown reasons, but with rumors of large Space Hulks entering the sector and forward recon stations going dark, the PDF of Perplior is on edge. What horrors or prizes await inside these space hulks if they arrive at Perplior?

There are a total of nine locations to fight for on the planet of Perplior, each providing strategic benefit to your faction. Fight your way into the depths of unknown architecture to uncover the mystery of Space Station Pumilian, create ambushes on supply convoys, mega-highways, raid transit stations, or ravage hive cities. Each location can narratively support Boarding Actions as well.

While the Vadinax campaign has its own overarching personae in the global crusade, We will have a few personae for our own campaign that focus mainly on the planet of Perplior. You’ll find more in our Store Player Pack 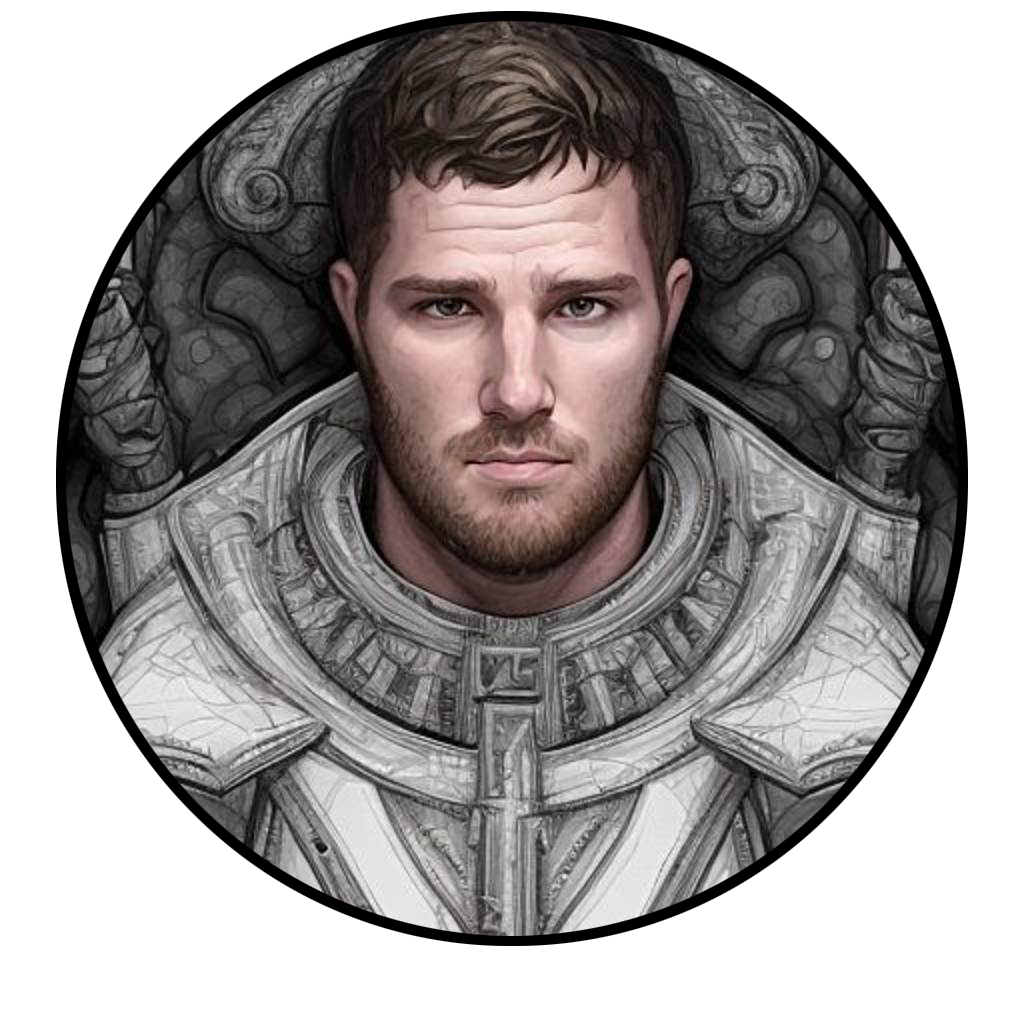 Titus served in the Perplior Planetary Defence Force for thirty-two Terran years and was promoted to Planetary Governor upon his predecessor’s death.  Having spent his entire life on his homeworld, Titus is naïve to the weight of the Imperium’s enemies that now find themselves on his domain’s doorstep.  He constantly involves himself in every aspect of the unfolding conflict around him, much to the chagrin of the newly arrived Logis Rho-Beta-Sun who calls his behavior “a negative impact on precalculated outcomes.”  Due to his decades of military service, Titus is heavy handed in utilizing military assets to quell rebellion and strife.  Having no real command experience, many of his PDF generals balk at his aggressive strategies in both simulated war games and with local insurrection.  While he appears to be a man in his early 30s, rejuvenate treatments reserved only for the most elite of the Imperium hide his true age of 89.  The pride of House Plantowski has much to prove in the upcoming conflict. 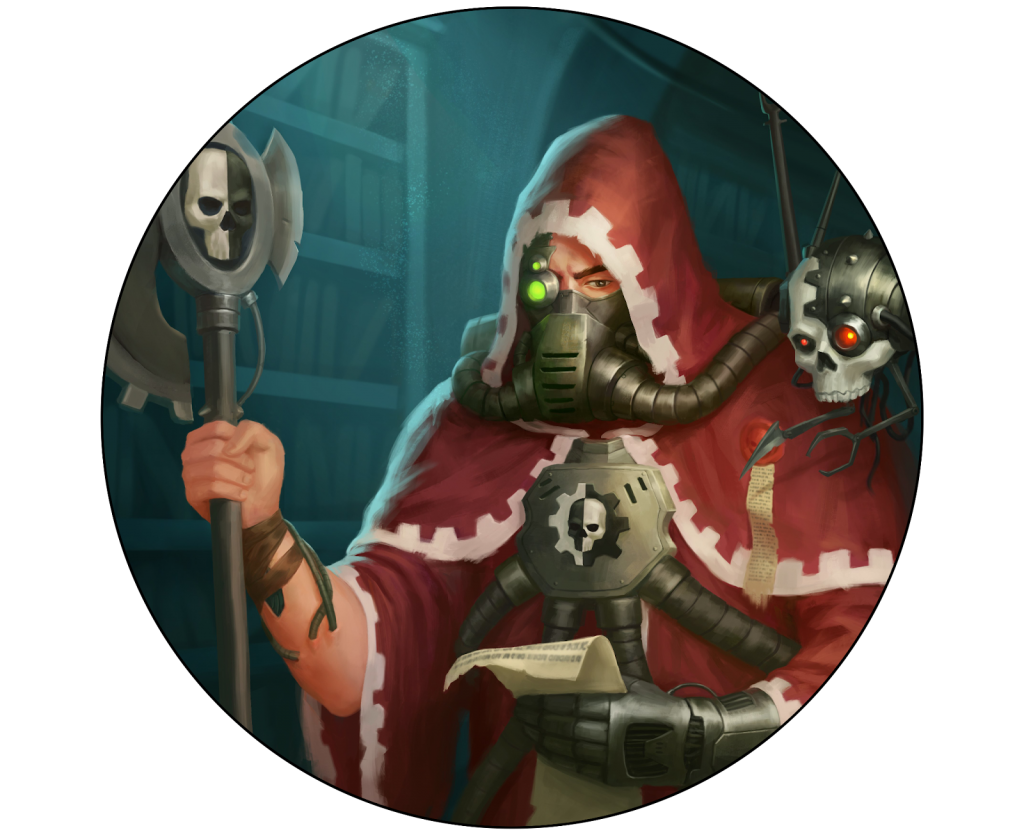 Logis Arcanus Rho-Beta-Sun is a high ranking Mechanicus statistician-prophet that along with Custodes Captain General Osiron led Torchbearer fleet Dauntless Intuition. He is prophetic in nature through algorithmic revelations, annoying to most, and often too useful to get rid of. His latest visions have led the fleet to Perplior with some of his prophecies hinting at another hidden purpose for their arrival. Upon arriving at Perplior, Rho-Beta-Sun took a place in the governor’s circle. Being the highest ranking Magi, he also temporarily displaced the local Dominus as head Logistician. His arrival has caused friction not only within the Mechanicus hierarchy, but also the Perplian elite, who are subject to offhand algorithmic prophecies portenting their fortune or doom. 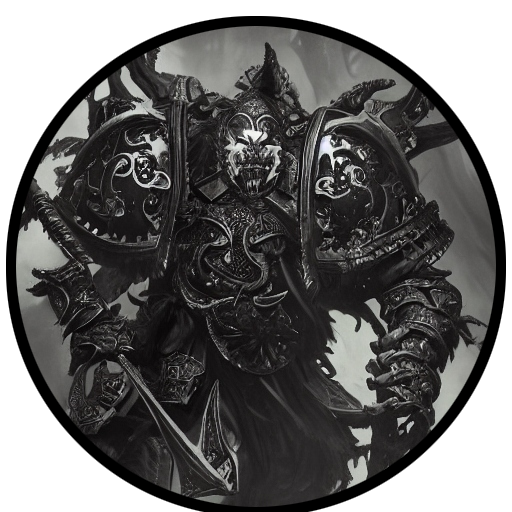 A consummate monster, Gardrukh seeks what all Sons of Malice traitor marines relish – fresh meat, for he and his brethren Heretic Astartes to sacrifice and eat in dedication to, and exultation of, their malevolent, outcast God of Chaos. His warband sees but one prize upon Perplior – a herd of humans and Xenos to be culled, defiled, and consumed. He leads his warband from a decentralized fleet of smaller ships, the largest of which is a Gladius-Class Escort Frigate, The Khün-Iddeg, housing Stormbirds, Thunderhawks, and various additional small craft. This decentralization allows the fleet to stealthily approach fresh meat, often falling upon Imperial prey-ships before they have recognized that the Astartes fleet identifiers transmitted to them are woefully out of date, and if verified, return as Excommunicate-Traitoris.

Gameplay at Huzzah Hobbies (and the local area):

Northern Virginia (and the surrounding DC Maryland area) is huge, and organizing 50+ Crusaders to come play on a single night is near impossible. How we’ve handled our previous crusades is with games scheduled on your time with your opponent at Huzzah Hobbies or somewhere more convenient (including other local area stores). The best time to play with a good crowd will be Monday, Wednesday and Friday Nights at Huzzah Hobbies. Friday nights in particular will always have a PCA administrator who will help you find an opponent for a pick up game, answer questions about the crusade and rules of 40K, and help set up the tables to fit the locations you’ll be fighting on. If you haven’t joined our local Discord, this is the best place to look for games and meet the other crusaders. Any other day of the week, I recommend checking out Huzzah Hobbies’ calendar on their website and placing a free reservation for table space on some of the busier days (Saturday-Sunday). Keep an eye out for any special events on the PCA discord or here on Goonhammer. 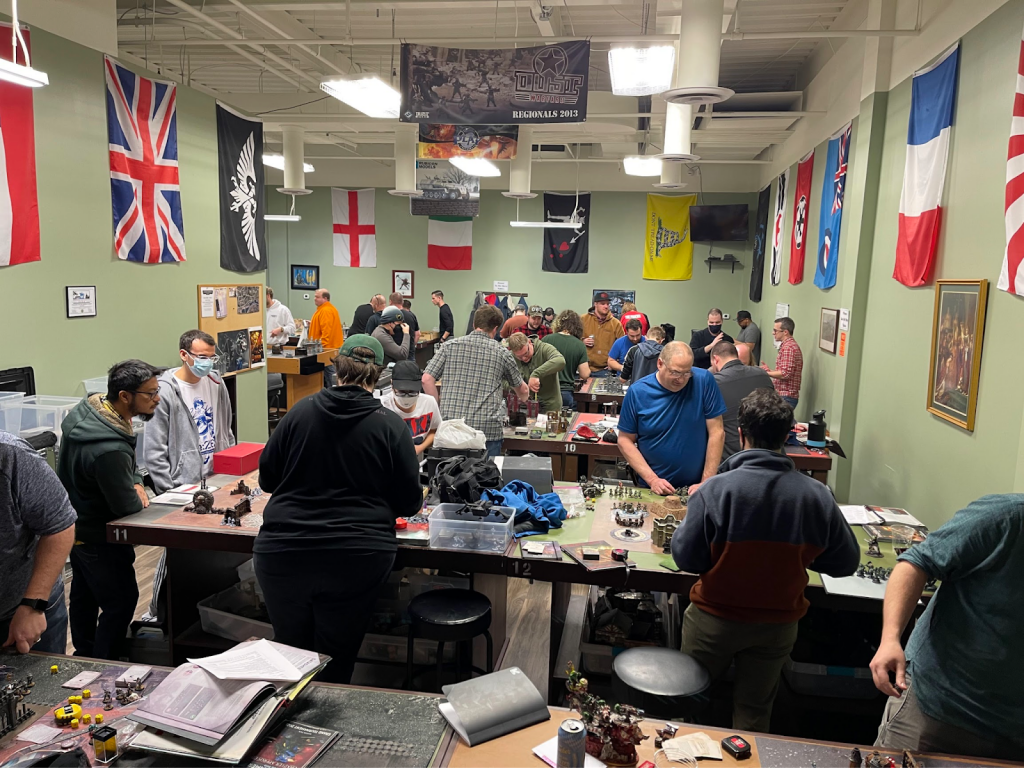 Factions will be split based on what super faction your roster is from: Imperium, Chaos and the various Xenos factions. Coordinating your efforts as a team to strike certain locations will be the key to victory for your faction.

In the end, grab as many games as you want, in any game size. There’s no minimum requirement of games and no limit on how many games you play (there are, however, diminishing returns as you repeat games).

And it’s not all about winning games

One of the biggest focuses we’ve had in our crusades was not about being the biggest stompiest boss in the entire crusade, but about those who made the effort to create their story, and build a beautiful army. Every phase of a campaign we rewarded players for the best voted narrative story, best voted painted unit, and best voted battle report. In addition, when we have time, we record some cool audio shorts of the crusade and its dramatis personae. 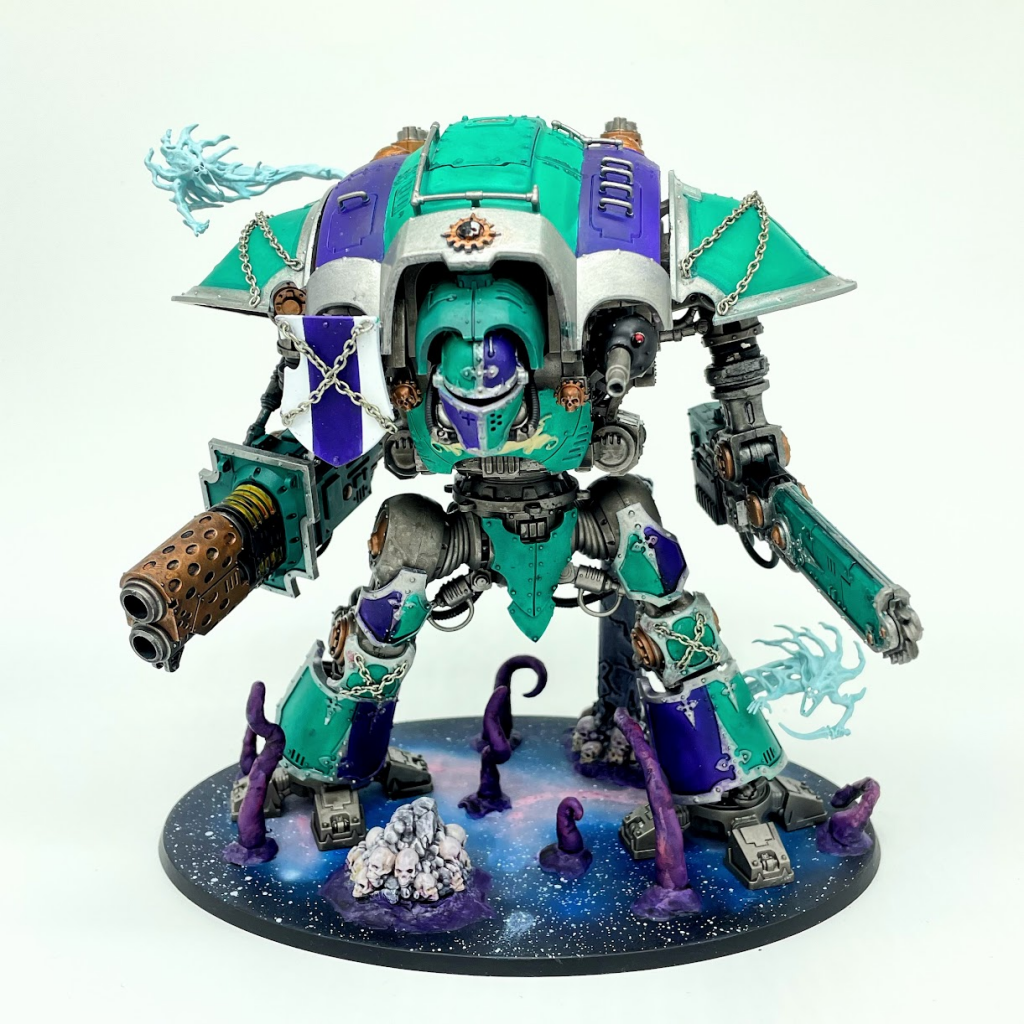 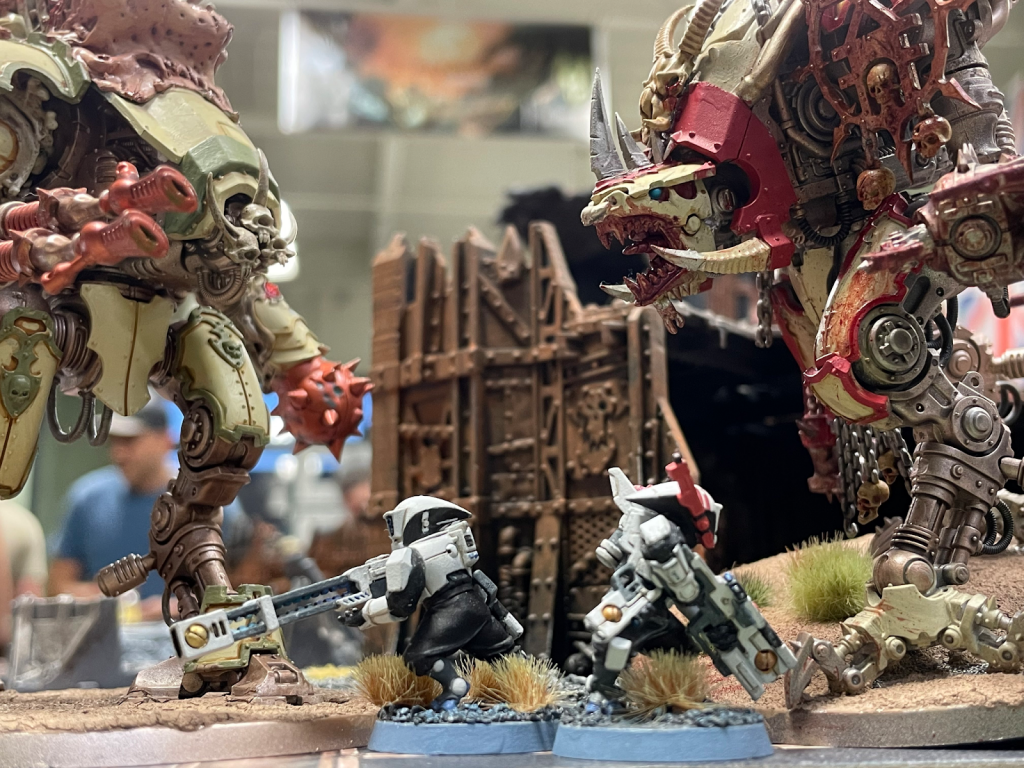 Crusade is one of my favorite parts of playing Warhammer 40K. From the insane moments like a courageous Shield Captain holding off a horde of Orks, an Astra Militarum regiment on the search of their lost sergeant, and one of my favorite moments, when a Death Guard Lord of Contagion rolls the same chaos boon to become a lowly spawn. I hope you will join us on planet Perplior and check for updates both here and on the GH and PCA Discord servers!!