In the October 2019 copy of White Dwarf, Games Workshop has released new and updated rules for using Vanguard Marines and Intercessors for Adeptus Astartes and Deathwatch in Kill Team. Some of it is new, some of it is just reprints from the old books and some of it is mysteriously absent or wrong (if you want the points, head over here). In this article I’ll cover what’s new, what to look out for if you’re playing competitively, and what’s ambiguous enough that you might get into an argument over it.

The article starts off with a note that the datasheets in the article replace those from previous books, and it also includes rules for Reserves that look like a reprint of the rules printed in Elites. There’s nothing too special here, just the basic rules for putting models into reserves during deployment and then deploying them at the beginning of any turn (including the first) by placing them in your deployment zone 1″ from the battlefield edge and 5″ from an enemy, or by spending a CP on the Outflank Tactic and putting a model on any board edge 5″ from an enemy.

There is also a Tactic from Elites that allows you to deep strike up to 3 REIVER or GRAV-CHUTE models from anywhere on the board more than 5″ from enemy models, which is very relevant. 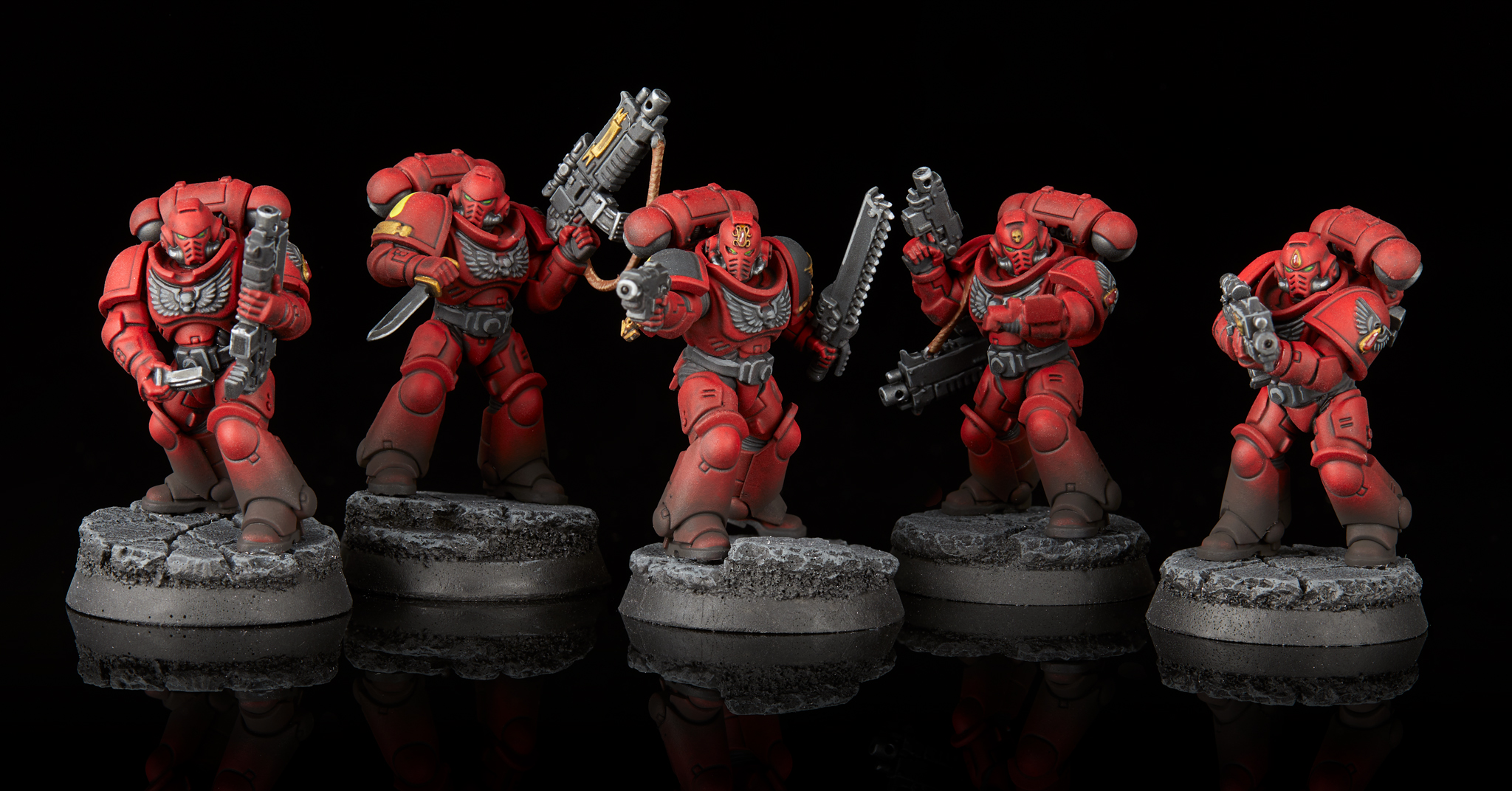 I’ll start with the Intercessors since they’re the baseline that we compare the other two wound troops to. Right off the bat we run into a small problem. Codex Space Marines Intercessors got an upgrade to their guns, but unlike many weapons that didn’t change Intercessor rifles are conspicuously absent from the weapon profiles listed. As of now that has to indicate that there’s no change, so the Stalker Bolt Rifle is more or less worthless and the regular Bolt Rifle is probably the best option with the extra range and AP. Also conspicuously absent are the Auspex option and the Medic specialism. Both of these were added as errata so I’d assume that this is an oversight.

For one extra point, Intercessors can be upgraded to Intercessor Gunners that have Auxiliary Grenade Launchers. These upgrade the range of grenades to 30″, and the errata that gives them long range penalties wasn’t applied. Krak grenades are very good and the ability to use them long range for a point is easily worth it.

Intercessor Sergeants are also a one point upgrade and have received new toys that can make them incredibly deadly. First, they can swap their rifle for either a chainsword or a hand flamer. This option isn’t great, but there are potentially reasons to take the hand flamer since you can shoot it and the bolt pistol at the same time. If you didn’t take the chainsword you can take a power sword, power fist, thunder hammer or chainsword (this lets you take a rifle and chainsword). All of these are reasonable options, but the sweet spot is the power sword and power fist since the Sergeant is already a 3 attack model and can make effective use of these. He’s a great candidate for a Combat specialization since he’s reasonably priced, two wounds and he gets to keep a ranged weapon.

Intercessors are the bread and butter of marines and at 15 points it’s hard to go wrong with them. A

Given that Games Workshop just posted all of the points free online, I’ll talk about exact values here. Incursors pay 16 points for an Intercessor equivalent, and that extra point gets you a slightly better melee option (you can think of it as 2.5 attacks to an Intercessor’s 2) and a gun that’s more lethal than a bolt rifle against targets in cover, but is otherwise worse. The sergeant gets no meaningful options but has the extra attack and point of leadership.

Incursors also have the option of bringing a Haywire Mine. A model with this option can drop the mine in the middle of their movement more than 3″ from any enemy models, and if an enemy model moves within 2″ of the mine every model within 2″ takes a mortal wound on a 4+. My understanding is that this will only ever get a single enemy model and can potentially take out multiple of your models. I can’t think of any uses where this is worth the 5 points but it might make sense against an elite army like Grey Knights.

These aren’t a standout unit but aside from the Haywire Mine they also aren’t embarrassing. They should make for fine line troops, especially against low armor or invuln-heavy armies where the AP from bolt rifles isn’t useful and the extra melee power from paired combat blades can be used. B 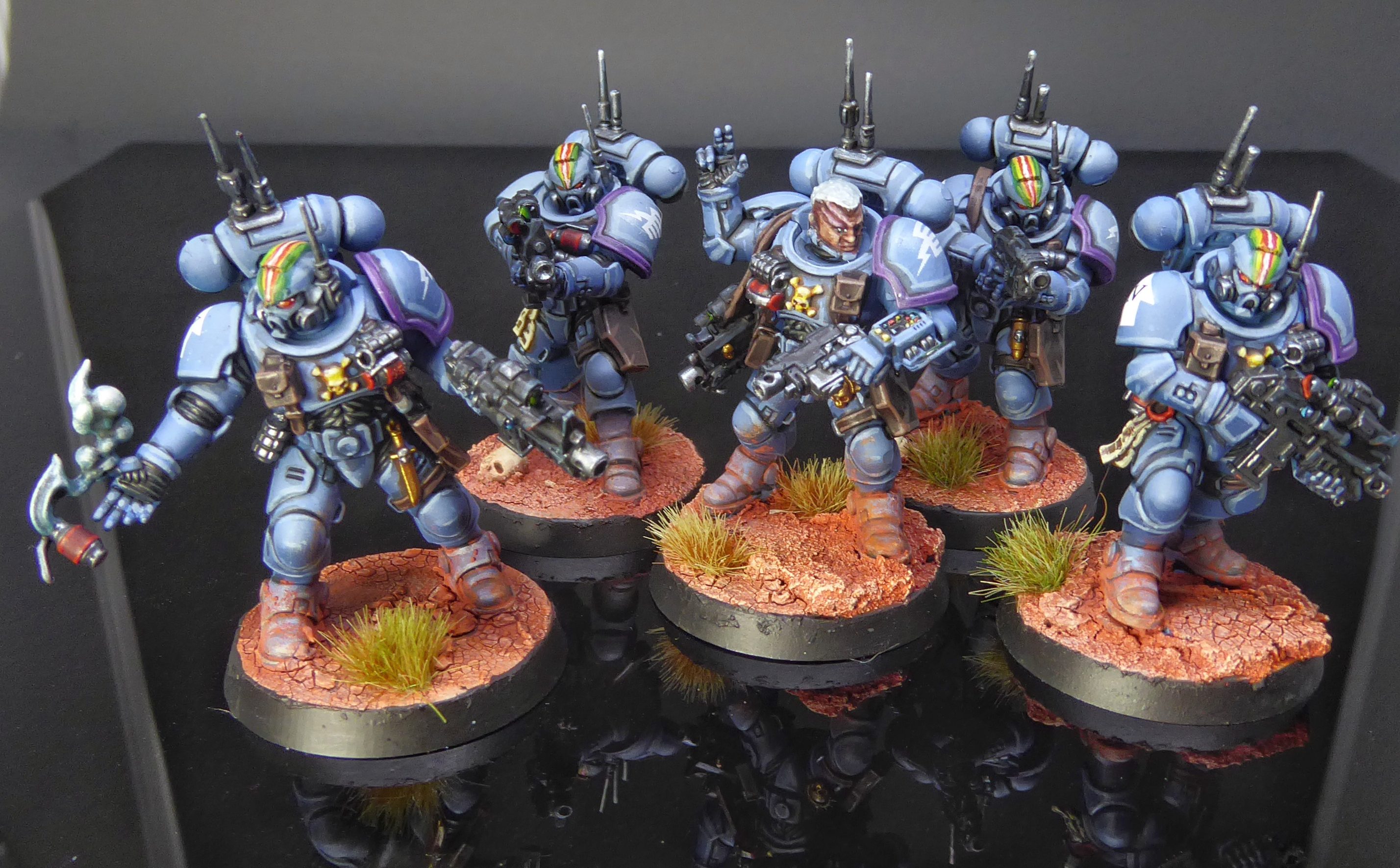 These are another intercessor clone, but this time they trade AP and range on their gun for automatic wounds on a 6 to hit and some special rules. Concealed Positions allows the model to ignore their deployment zone and deploy anywhere more than 9″ from the enemy deployment zone, which is pretty nutty when you have things like Arena boards where the first turn is mostly about getting through doors. Omni-Scramblers prevent enemy models from deep striking within 7″ of the infiltrators rather than the normal 5″ in Kill Team. That makes charging out of deep strike much more difficult and helps deny portions of the board.

Infiltrators also have the option to bring an Infiltrator Comms Array that gives models within 6″ of the Infiltrator +1 leadership, but it’s probably overkill in a high leadership team like Adeptus Astartes and it’s not cheap at 5 points. They can also spend an extra point for either a medic option or the standard sergeant upgrade.

At 17 points they’re a worthwhile upgrade over an intercessor if you plan to use their special rules, but if there’s no deep striking and they have to start in your deployment zone there’s not a big reason to spend the extra two points. B

Reivers come in two flavors, knife or gun, but they don’t specialize too much with either option. The major benefit of Reivers is that they are cheap, tough deep strikers that can get a surprising amount of mobility with their grappling hooks and grav-chutes. I personally think that cheap is better since they’re mostly there to sit in the back and contest objectives the enemy thought were safe. The -1 leadership is a neat bonus that you shouldn’t forget but it doesn’t come into play too often.

Reiver sergeants get the benefit of being able to take the carbine and the knife for two shots at range and four attacks in melee. These are still S4 AP0 so don’t expect too much, but if you’re going to take Reivers this should be the first model you grab.

They’re a bit specialized but if you need their niche they fill it well. B 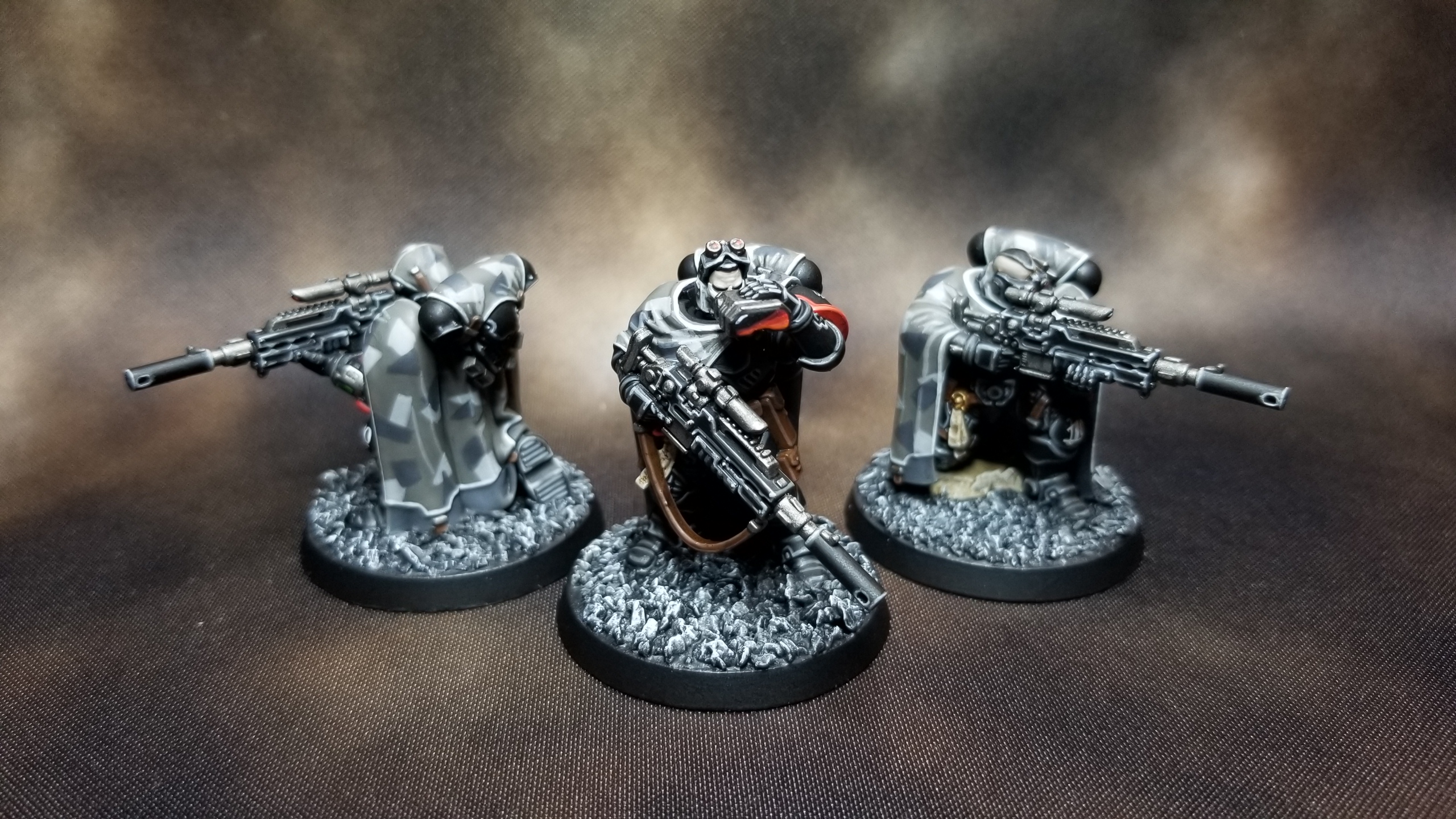 The Bolt Sniper Rifle was bumped up to S5, which is something of a sweet spot in Kill Team where most teams are full of T3 or T4 models and only a few go up to T5, and it has both a killer Executioner round that is AP-2 and deals D3 damage (which is good for forcing tough injury rolls) or accurate Mortis rounds that are +2 to hit (offsetting movement or cover penalties) or can shoot at targets out of line of sight (these shots only hit on an unmodified roll of 6). The Las-Fusil is a bit simpler with the S8, AP-3 3 Damage profile, but that threatens most Kill Team models with high probability one-hit kills. The Las-Fusil is worth buffing up with an Auspex/Comms model since it’ll drop even elite models from across the map.

Eliminators also have Concealed Positions like Infiltrators, and they have camo cloaks that give an additional -1 to be hit if they are obscured. They will consistently get where they need to go and if that spot has any cover they are incredibly hard to shift with ranged firepower.

The Sergeant upgrade is the standard 1 point for 1 attack and a point of leadership, but you’ll mostly take it for the option to bring them as your Leader. A Leader Eliminator with a rifle for 19 points can sit back on objectives, get something done every turn and keep your CP farm going.

Eliminators don’t have a place in every matchup but where they’re good they will shine. A

The competitive way to run Commanders is to take a cheap Strategist, and these qualify. You have an option of a Reiver loadout with a combat blade, heavy bolt pistol and spooky mask or an Incursor loadout with a 2 damage rifle, paired combat blades and a grav-chute. Neither one is that good as a combat loadout but paired combat blades are pretty even with an extra attack when you’ve already got four and the rifle is better than the pistol so the Incursor loadout wins for me. Remember that both Grav-Chutes and Reiver keywords give access to deep strike so there’s no difference there. A

The Fortis Kill Team rule lets Deathwatch add Reivers and Intercessors to their kill team, and the datasheets here override the core book datasheets for Deathwatch as well. There’s no change to Reivers, but the new sergeant options for Intercessors are very relevant. Deathwatch have to pay extra for all of their bolt weapons so the option to replace a 2 point bolt rifle with a 0 point flame pistol makes some sense, and the combat options are all welcome.

There are two major takeaways. First, all of the options at least look reasonable. Intercessors are still cheap for what they do, and each of the side-grade options has a neat little perk that makes them reasonable without being strictly better or worse. Incursors are nice against hordes, Infiltrators play well against deep strikers and Reivers are still the efficient deep striking option. Eliminators got a buff that makes them very attractive as actual killers now, and the Phobos LT doesn’t stand out but looks very efficient. It’s nice to see that sort of variety.

The second takeaway is that the article was poorly proofed and based on how much old stuff it got wrong I’m not sure that I can trust the new entries. Intercessors had three things added in errata: They can take an Auspex, they can be medic specialism and the Auxiliary Grenade Launcher gives grenades a long range penalty. None of that made it into this article, and this article explicitly overrides the old datasheets so we lose the errata. Do we assume that they intended to invalidate a bunch of kill teams with auspex on Intercessors, or is this a proofing error? I can come to a reasonable solution, but seeing that many potential errors makes me cautious about things like Incursors. In 40k they have Concealed Positions, in Kill Team they don’t. Is that intentional, or is that an oversight? With what we know I have no idea.

Don’t let me scare you too much. The rules in the White Dwarf article and the points on the website still look reasonable, balanced and fun. I hope you enjoy the new Vanguard models, I know that I’ll be playing with them.