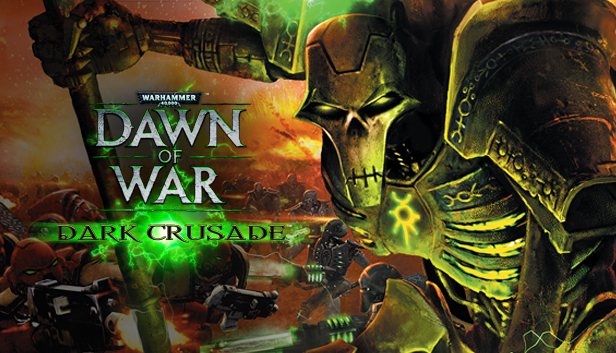 Last week we covered the base Warhammer 40,000: Dawn of War game, which made a massive impression on the RTS genre in the early Aughts and inspired three expansion games from 2005 to 2008. This week we’ll actually talk about those games, and we might be a bit less laudatory.

But not entirely so! We begin with 2005’s Winter Assault, which is frankly a pretty good spiritual successor to the original Dawn of War campaign, both in structure and content. (It’s so similar, in fact, that the Winter Assault entry on your steam list is a 70-some KB “installation” that basically just checks to make sure you paid for the content and then passes you back to Dawn of War – Game of the Year Edition.) Winter Assault gives you the option of playing as one of two doomed alliances: the Eldar and the Imperial Guard, or the Orks and the Chaos Space Marines. Regardless of which set of factions you choose, you’ll be greeted with a fairly complex single-player experience which assumes you’ve played and beaten the original game’s campaign, and are also familiar with the workings of the Orks, Chaos Space Marines, and Eldar. The game will give a fairly forgiving introduction to the Imperial Guard, who are new as a playable faction instead of as boutique backup for the Space Marines, but you should expect missions to run you from forty minutes at the absolute low end to an hour and a half or even two hours at most, since it’s not only a high-skill campaign but for storytelling reasons it will have you jumping back and forth, multiple times per mission, between the two factions you’re commanding. 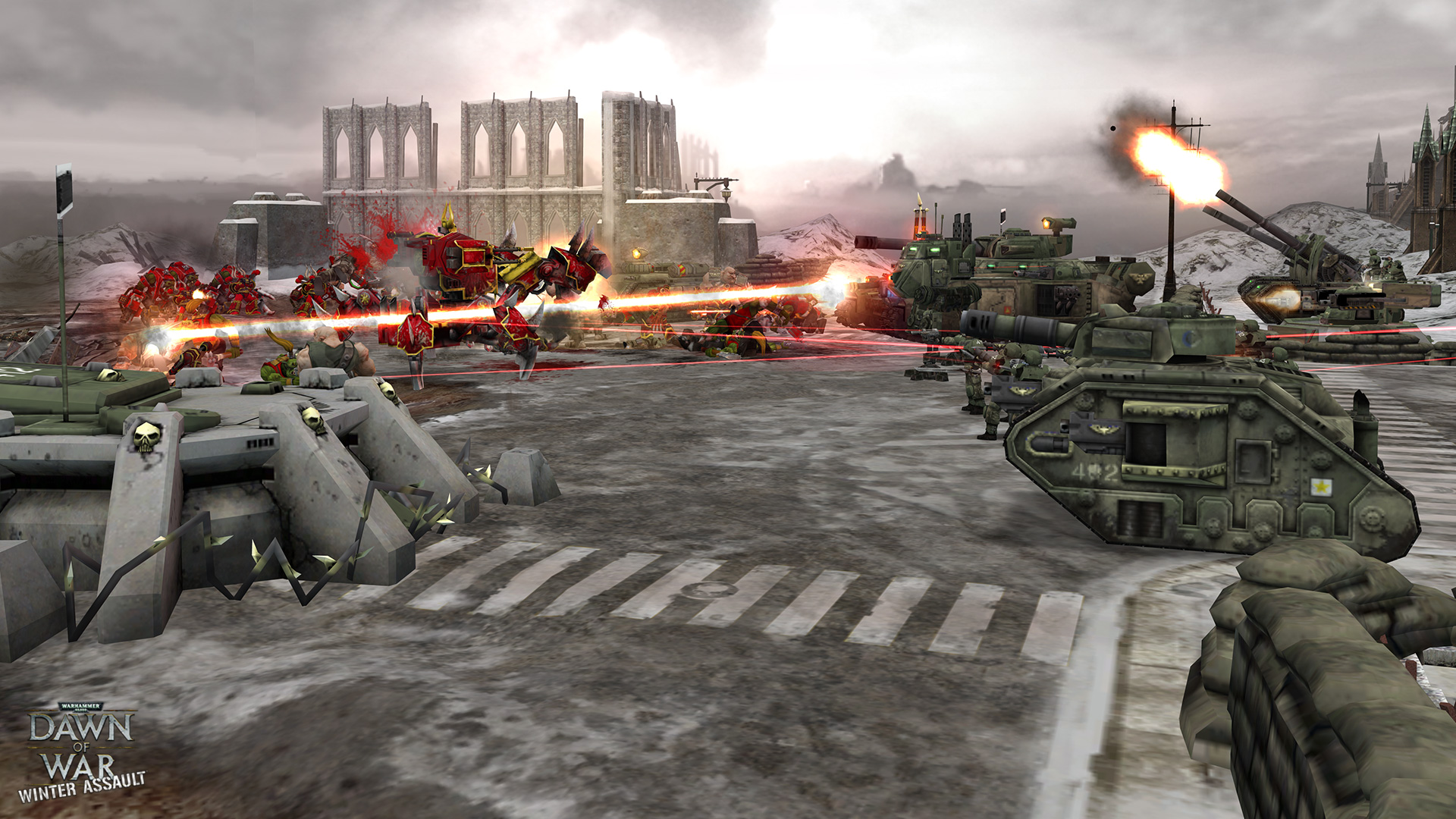 It was something of a complaint for the original Dawn of War campaign that the goals in question were all basically “play a skirmish map and kill all your enemies,” and the team that put together Winter Assault heard that. Every mission in Winter Assault’s campaign is bespoke — sometimes even too much so. For example, the fourth mission of the Eldar and Imperial campaign involves you having to manage both factions as they compete against each other to do parallel escort missions from one end of the map to the other. You’re expected to jump back and forth between factions with a toggle button, and essentially have to play two factions at once. It gets to be a bit much.

In the end, however, it does fully realize the promise of Dawn of War’s story-driven campaign, and even addresses my complaint from the original game’s storyline from last week — the Eldar are given a legitimate reason to work against the Imperials here, and the frustration of these two factions being unable to get out of each other’s way is very well communicated without the Imperials feeling like fools who made bad choices at every turn. The Orks and Chaos, meanwhile, generally treat each other like Orks and Chaos should — it’s probably the best representation of the Orks in any of these games from a storyline perspective, but that’s not saying a whole lot. 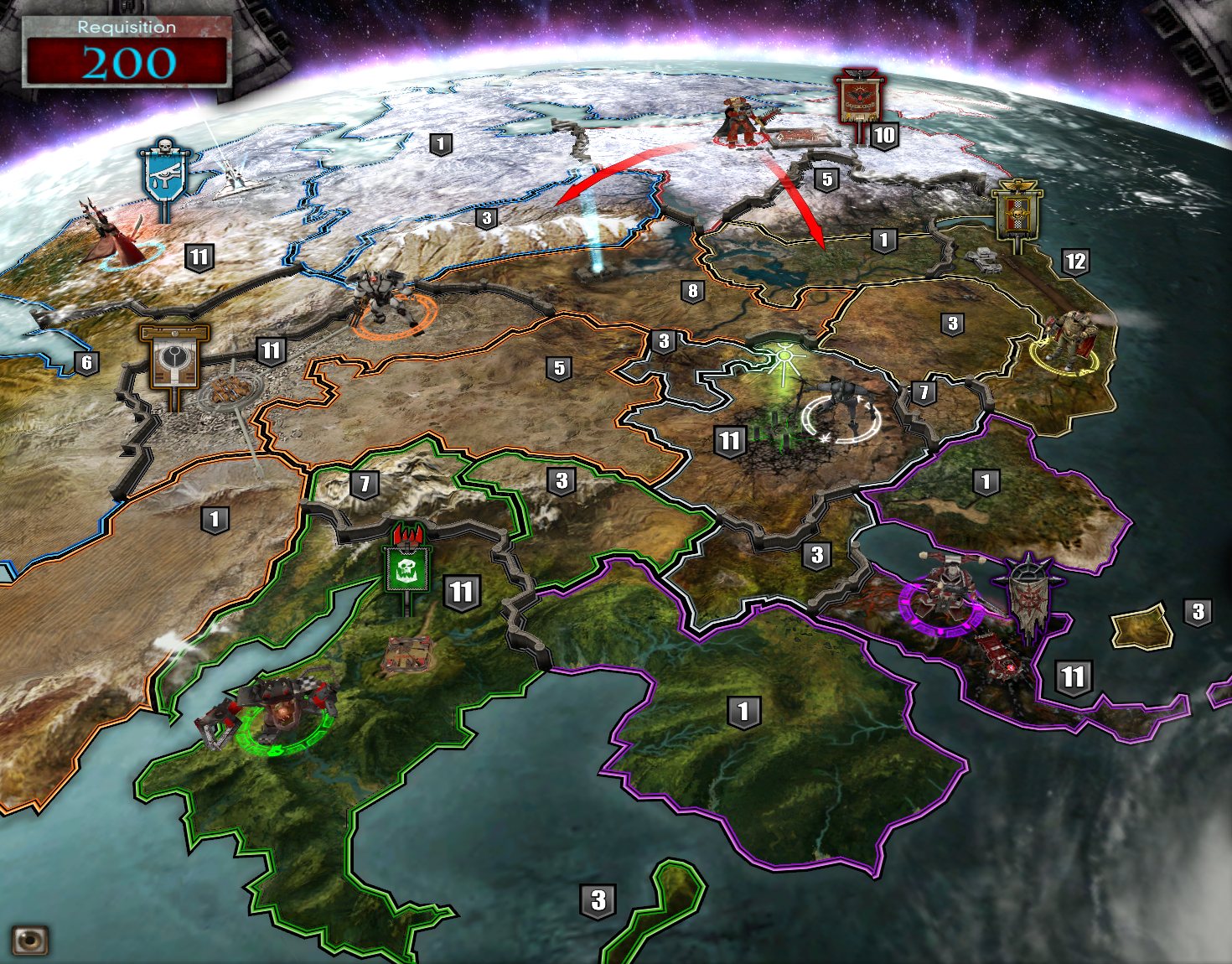 Warhammer 40K: Dawn of War – Dark Crusade changed up the game entirely. Adding the Necron and Tau factions, both of which were a bit overpowered but could be countered by a player who knew what they were doing (if not always by the AI), the game featured a roster of seven playable races — and that meant no more boutique missions. Instead, the game asked the player to manage a strategic map layer of attacking and defending a number of provinces, while holding a fortified home province that if lost meant game over. Normal missions did not have cutscenes or story content like Dawn of War and Winter Assault had, but were instead skirmish maps repurposed from the multiplayer mode — your goal was always to eliminate the opposing players’ HQ buildings. The good news was that if you were defending your territories, you got to keep all the buildings you had built there. The bad news was the plural from two sentences ago wasn’t a mistake, and by turn 4 or 5 you will routinely find yourself in 1v2 situations against the enemy AI. Smart and quick play, along with opportunistic basebuilding, would get you through the campaign — but veterans learned to toy with their food before finishing the meal, if only to make it easier to defend the province later on.

To the extent that story content exists, it exists in the form of a cutscene that plays when you assault an enemy faction’s base — usually one that portrays the faction in a doomed, heroic light, unless that’s entirely impossible to believe as with Chaos and the Necrons — and a bespoke mission that makes you work to eliminate the faction. The Eldar, for instance, not only begin with a massively built up main base and a forward outpost, but they have a bunch of Orks they’ve tricked into doing their bidding, and their bidding, of course, is constant harassment of your main base. It’s well done, but there’s not much of it — the most important storybeat in Dark Crusade is that the doomed Farseer Taldeer takes over as the main Eldar character, setting up her various humiliations, torture, and murder in the game novelizations and Dawn of War II. But that’s getting a bit ahead of ourselves. 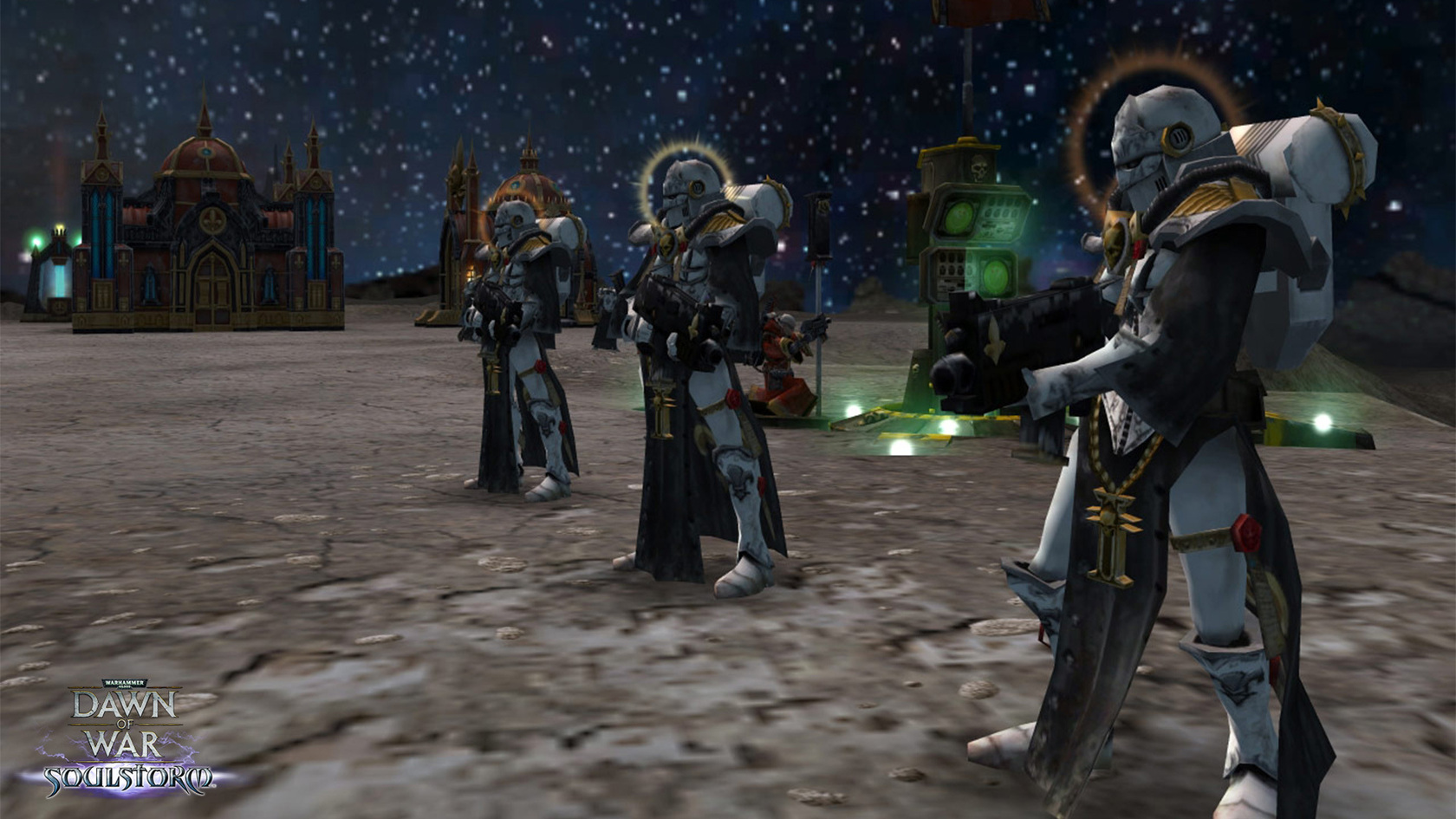 Soulstorm came out two years later and represented a genuine attempt to expand the Dawn of War playable roster before the second entry in the franchise landed in early 2009. That’s probably the best thing that can be said about it. The game’s campaign expanded the theatre of battle to a full system instead of just a single planet, but with each planet only representing 4-5 territories, they were hard to split between nine factions. The win conditions for the skirmish missions that constituted the campaign expanded as well, but they were mainly just annoying — “Destroy HQ” was replaced with destroying all unit-producing buildings, and then there was a capture-and-hold mode with Critical Locations that could lead to hours-long missions as two sides gained and lost control over one point that they couldn’t build defenses on or around. The bespoke final missions returned, but few ever saw all of them, because even outside of the campaign structure the game’s mechanical balance was off.

The third expansion added the Dark Eldar and Sisters of Battle. but the game was buggy and atrociously balanced. The Sisters, Necrons, and especially Dark Eldar were all overpowered, and the Sisters benefit from an infinite requisition trick involving cancelling Holy Icons in progress on Listening Posts that returned the full cost of the Listening Post and the Holy Icon, instead of just the initial investment. The Necrons took a while to get going but once they did were invincible, and the only two armies that could really do much against them were the Sisters or, more often, the Dark Eldar, who developed fast enough that they could end most games against the computer in six minutes or less. Also, while reviewing the game for this feature, I lost progress on no fewer than four missions across multiple campaigns because the game crashed due to not being able to find free space in the Temp folder of an SSD with 100 GB of free space. So if you’ve CTD’d out of Soulstorm before, it’s still probably what you remember it being.

Soulstorm might not have been the best way for the Dawn of War games to age out of production, but the game as a whole has to be considered an incredible success: games companies these days would kill — and I’m not entirely certain that’s a figurative “kill” — for a title with a four-year revenue tail that leads directly into a sequel. That Dawn of War was able to support that says a lot about the fundamental quality of the core product and the things it did right within its formula; it remains more or less the consensus best Warhammer 40K video game ever made, with only one real challenger in Warhammer 40K: Space Marine.

So of course the sequel completely changed that core gameplay loop and formula. Next week we’ll look at Dawn of War II.

Final Verdict: Given that they’re available for between $9 and $13 on Steam, every one of these games is a worthy purchase — even Soulstorm, with its issues. Just make sure to save a lot when you’re playing it.