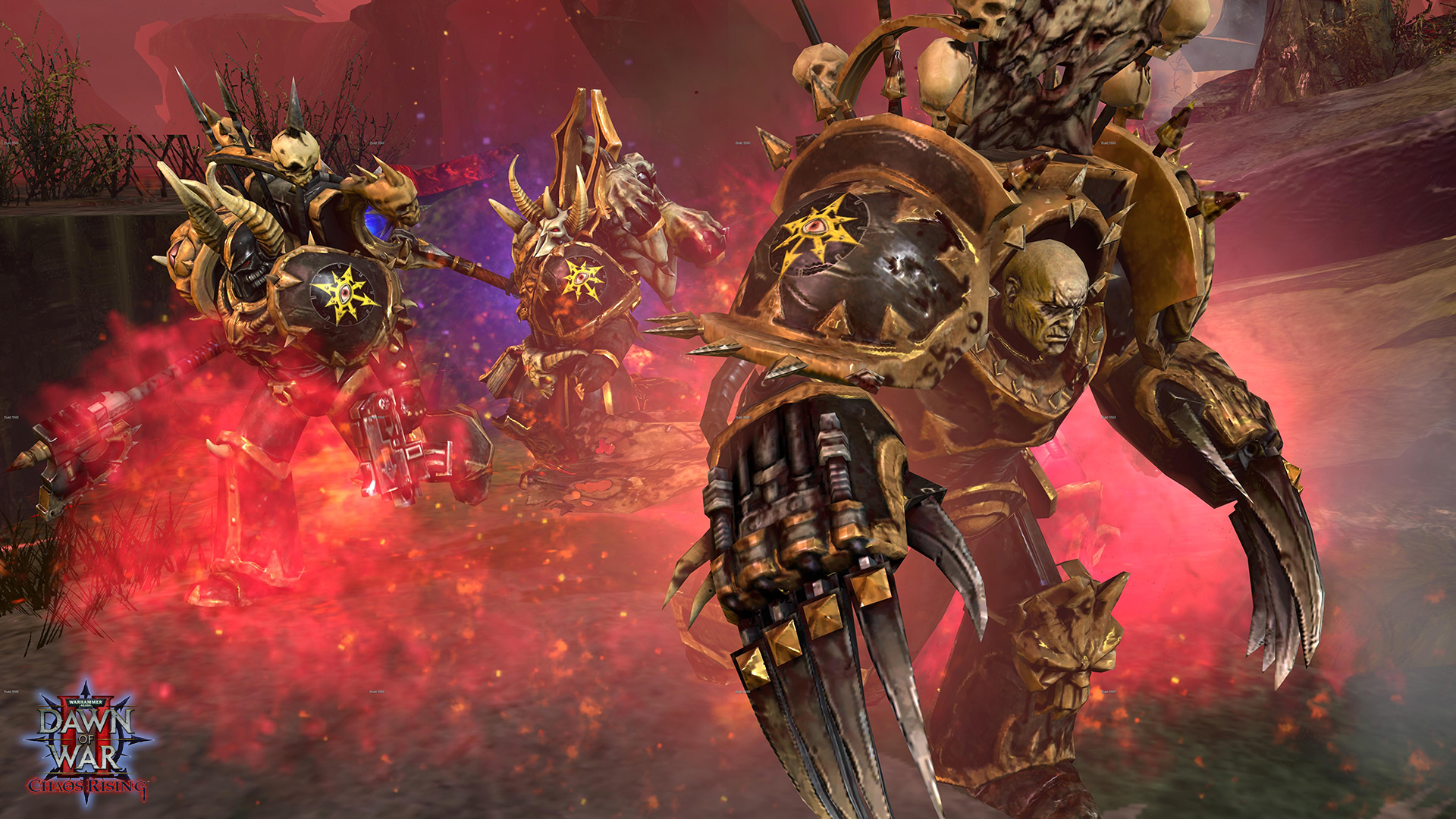 So we arrive at Warhammer 40K: Dawn of War II. This is probably the defining modern Warhammer 40K game, rivaled only by its predecessor and Warhammer 40K: Space Marine; to the degree that it can be said that a game that’s sold some 4 million copies across its life was “hurt” in its reception, it was hurt by being a hero-based game with an evolving proto-MOBA mode which was released in February of 2009…and League of Legends hit in October that year.

First, a description of what is different between any edition of Dawn of War and its sequel: Dawn of War II is not an RTS game. With the Retribution expansion it will get some of the way there; in the multiplayer mode it gets some of the way there. The base game and the Chaos Rising expansion, however, have very little interest in the traditional RTS genre trappings. In the multiplayer you’ll at least get to manage supply a bit, but base building is pretty much gone. You summon units in at strategic locations — one of the few things that’s pretty much unchanged from Dawn of War is that this is a game based on capturing and holding points — and then use those units to fight your enemy. Further streamlining follows: you no longer have to care too much about in-mission upgrading; point defense is now prosecuted pretty much entirely by units instead of defensive structures (and to the extent that you do have defensive structures, they are extensions of abilities possessed by your hero units), and vehicles pretty much no longer matter at all. There isn’t even a Skirmish mode in the game anymore to fight the AI, because MOBA AI is far harder to program than RTS AI with fewer easy cheats to make them tough.

What that leaves you with outside of the campaign are the two (equally dead now) modes of Multiplayer, which is a head-to-head game between hero parties of one of five factions — Space Marines, Orks, Chaos, Eldar, Tyranids — and the more intriguing Last Stand mode. Last Stand is also a dedicated multiplayer mode, but it involves you and two other players defending “lanes” against an onslaught from the computer. It’s half tower defense, but more importantly, half MOBA. Proto-MOBA, really. You play until you die, and then you earn XP and get to buy powerups for your heroes for the next time you play. Dawn of War II might have had a chance to eat League of Legends’ lunch here if they’d turned this into a PvP mode, but there’s reasons to think it wouldn’t have worked — the laser-like focus on a single hero requiring exemplary tactical play that League demands doesn’t really resonate when controlling a team of three to four characters. League’s model is simply much more elegant. That said, Relic Entertainment definitely was able to read the room as to where the RTS genre was evolving, and it’s not like they were poorly compensated for it. They just didn’t turn it into a market-defining success. 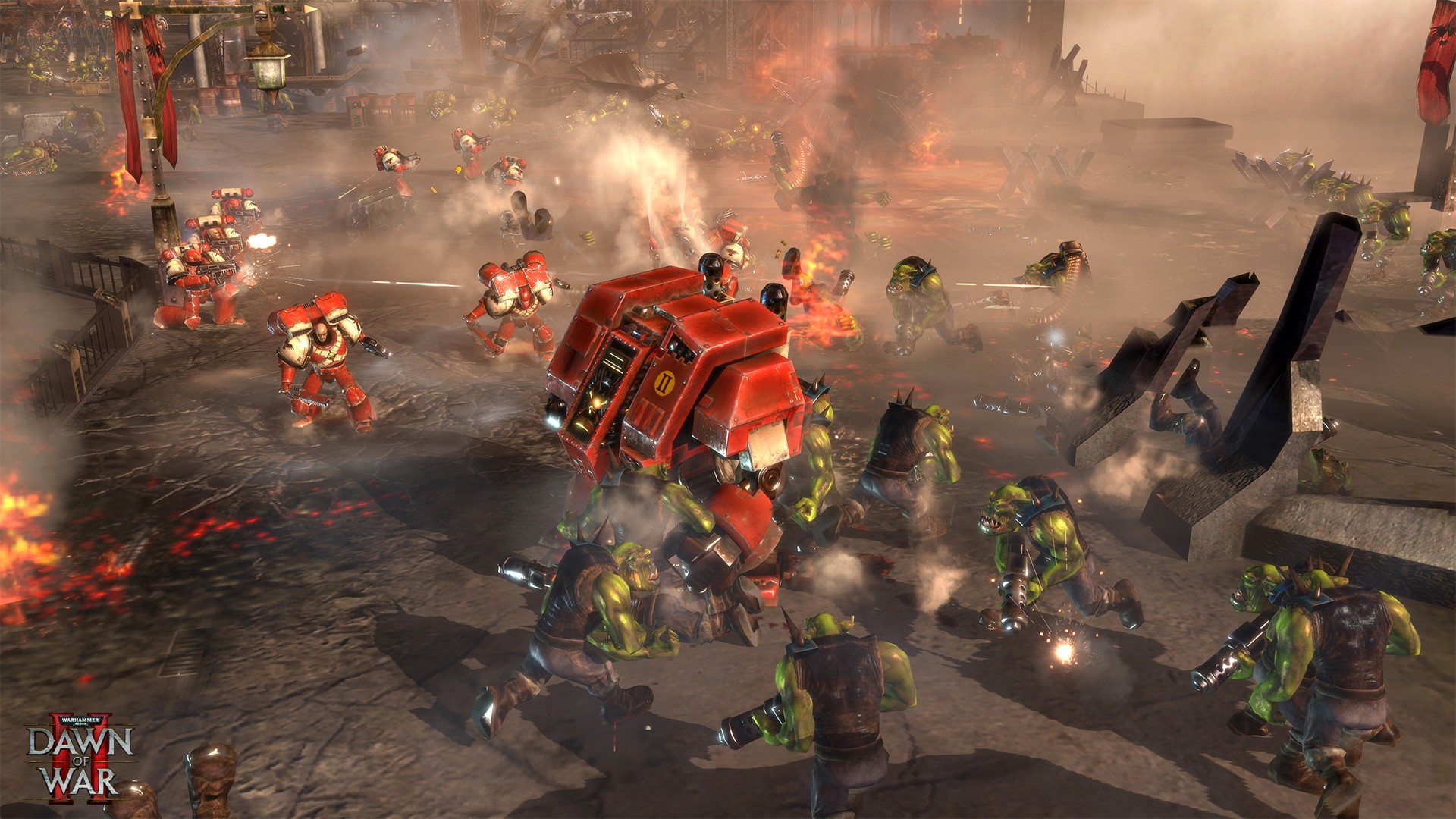 The far meatier offering from both the base game and the Chaos Rising expansion, and the one that’s much more convenient to play in 2019, is the single-player campaign mode. While still playing as the Blood Ravens, gone is the idea of building forward bases and seizing or defending territory, as was the state of things at the end of the original Dawn of War’s production cycle. The territory model does return — the game takes place in the Blood Ravens’ home sector hosting their recruiting world of Caldonis, and there are enduring territories across the four core worlds (five, including the Chaos Rising expansion) which have set states that the game remembers after each mission played there. But you’re no longer playing as Gabriel Angelos (he is instead an NPC mission giver). You are…the Force Commander?

This is an odd move by Relic, and in my opinion a misstep. Dawn of War II and Dawn of War II: Chaos Rising make the main character of the campaign a silent protagonist that you get to name, and then the plot and characterization are mostly dispensed by your subordinates: Avitus, the Devastator Space Marine; Tarkus, the Tactical Space Marine sergeant; and Cyrus, the Scout Sergeant. Along with a bevy of NPC characters such as Administrator Derosa, the Techmarine Martellus, Captain Davian Thule from the Dark Crusade and Soulstorm expansions, and Angelos himself, these characters will do the vast majority of the heavy lifting for the plot. And your Force Commander will just sort of grunt and nod along for all of it. Warhammer 40K is not a universe whose aesthetics reward silent, passive protagonists; many of its trappings can become stale or unbearable if not properly anchored by good character work. So this is a missed opportunity — and one that Retribution will correct.

The rest of the mechanics of the campaign are good: the primary gameplay loop is that you go do a mission featuring a squad of four heroes of your choosing, and during that mission those heroes earn experience for killing enemies and accomplishing objectives. Additionally, over the course of the mission as random on-kill drops, you acquire wargear, a concept imported in from the tabletop game which here should mainly be understood as “not-quite-Diablo loot drops.” Your heroes have various equipment slots, these drops go in those slots, and the wargear you don’t need or want can be recycled into bonus XP for the entire team. While heroes that you don’t bring on missions don’t earn XP, they do get the bonus XP from recycling, which is a decent enough trade off. When heroes level up, they can put attribute points into one of four categories (basically Health, Energy, Melee, and Ranged) and at certain milestones they gain new, boutique abilities. It’s fairly basic, but well-done and enjoyable.

As far as the story of the base game goes, well…they execute it in a perfectly enjoyable fashion. Sadly, we’re back to the old Eldar-Human relationship from the first Dawn of War, where the Imperium of Man has the forethought and canniness of a rabid bull in a china shop and the Eldar appear to have spent their entire primary and secondary education doing nothing but practicing the smug speeches they’ll give to Space Marines upon their deaths. Farseer Taldeer shows up again all-too-briefly; she won’t be important until Retribution, really, and her offbrand stand-in Farseer Idranel is as bafflingly tedious as every other Eldar hero in a Space Marine plot. The aforementioned Administrator Derosa, however, is a welcome addition to the cast; she’s in a fairly standard role as the put-upon bureaucrat in charge of an important Imperial world in crisis as the dilettante nobles supposedly responsible things fiddle while it burns. These games still have yet to put a female character in a role where your characters aren’t either chainswording her for being a filthy space elf or patronizing and then coming to respect her for being a woman in charge of Imperial Guard regiments, but Derosa is crisp and competent and all in all done fairly well. The actual plot of the base game is somewhat its weakest point; you have to stop a Tyranid invasion, and, well, you do. 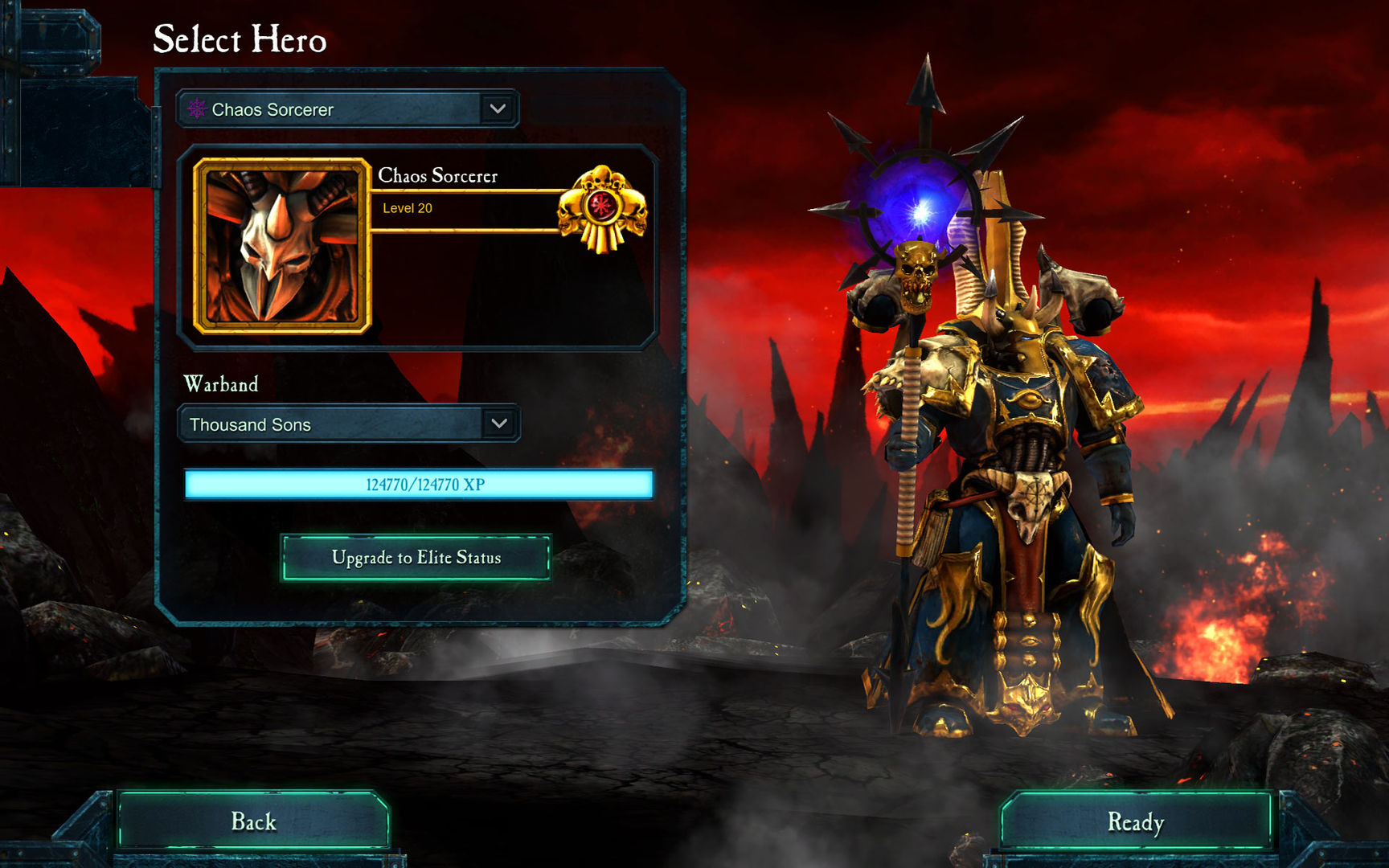 The expansion, Chaos Rising, makes things a bit more interesting. The campaign is far shorter than the base game’s — perhaps half as long, if that — but by involving Chaos it adds a couple new mechanics to play with. This is a direct continuation of the base game’s story, such that you can import your completed save at level 20 into Chaos Rising and begin progressing to level 30, though the game comes up with excuses for not letting you immediately deploy in, say, the Terminator Armor you had by the end of that campaign. The biggest mechanical changes in Chaos Rising are that each of your heroes (except Davian Thule, who is now a Dreadnaught as is otherwise beyond reproach) now has a Corruption meter…and each is suspected of having fallen to Chaos and betrayed the Blood Ravens. This meter has a number of milestones, and these don’t represent demerits — in fact, your heroes become more powerful the more corrupt they are, which fits the setting just fine. It can be increased or decreased by failing or completing various secondary objectives during missions, or, if you just want to brute force it, there’s an armor that drops early on which you can donate over and over again to put +2 Corruption on all your squads.

The story of Chaos Rising is also a fairly standard Chaos and Space Marine story, unfortunately — it even repeats what the base campaign of Dawn of War does and have the Chaos sorcerer betray an incredibly stupid Chaos general to his doom before summoning a great demon of Chaos, and this time instead of a great big generic Diablo-looking fellow we’re treated to a big Nurgle-aspected lad named Ulkair, whose main character trait is that he looks like Oogie Boogie from The Nightmare Before Christmas. This would be less aggravating if the final mission of the campaign wasn’t both balanced in such a way that the AI faction of Gabriel Angelos and his Space Marine army were pretty much necessary to win it, and also broken is such a way that this AI faction army (because they’re lazily just set to attack move) weren’t pretty much guaranteed to get stuck rounding a hairpin turn in the map geometry and eternally run back to enemy respawn points to fight them until they all die. Ulkair is talking more or less the entire time.

All of that said, the gameplay is far more compelling than the campaign gameplay of both the previous base game and its expansions. Missions are shorter and far less susceptible to rush tactics from the AI, and the character interactions between various members of the Force Commander’s team are actually quite good, even if the plot is, well, silly. A small problem is that there was apparently some anxiety that players would save-scum mid-mission to get good outcomes, and so…you just…can’t save in the middle of a mission at all? This isn’t so bad for the base game where almost every mission is 15-25 minutes (though it is annoying), but in Chaos Rising you start out with a baseline 30 minutes for each deployment, and then more if you screw something up or want to do side objectives. Retribution will fix this as well.

In sum, an excellent example of a sequel willing to change up the formula to fit what people were more interested in playing at the time; while I’m among the RTS fans who were somewhat disappointed in the move to a more hero-based game, I also found Dawn of War II to just be more playable in a raw sense, especially with much shorter mission times. And almost all of the problems with the Dawn of War II formula — from an over-focus on heroes to an over-focus on the Blood Ravens — would be properly addressed in the Retribution expansion, which was enough of a game-changer that it’s getting its very own article.

Final Verdict: Less replayable than the original Dawn of War perhaps, once you allow for the expansions, but an incredibly solid experience — especially in single player — that should be in your collection.