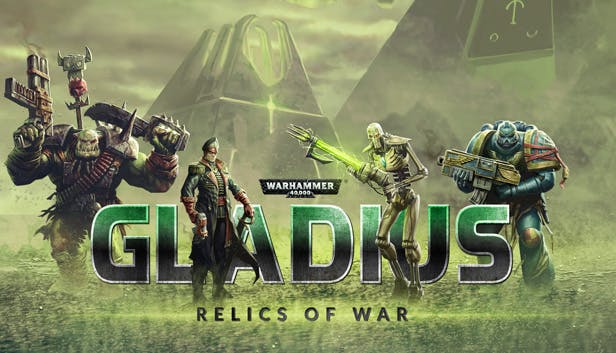 Many developers have attempted to capture the grim darkness of the 41st Millennium (and the high fantasy of the Old World) in video game form. With the release of its Tau expansion, we thought it would be good to have resident Goonhammer video game reviewer Jonathan “Crion” Bernhardt pick up the game and see if it’s worth your time before.

Is it even possible to make a good Warhammer 40K 4X game?

It should be, right? After all, the titular four exes are “explore, expand, exploit, and exterminate.” That should describe, in most part, your average game of any of the Dawn of War franchise entries, and gets close to maybe describing some of the tabletop experience! Sadly, the four exes themselves are — while catchy — not actually great descriptors of how the genre works. There are certain prescriptive genre practices you have to follow when making one of these, and Warhammer 40K: Gladius might hew to the letter of the law there, but it never upholds the genre’s spirit.

The undisputed god-emperor of the 4X genre is the Civilization series, and Gladius is very clearly aping the presentation and visual style of the later entries in that franchise. There are hexes, environmental conditions on the hexes, city-based gameplay; military units don’t stack, and much of the early-to-mid game is based around collecting resource inputs from special sites found in the larger world, while fighting roving neutral armies. There is a progressive research tech tree that leads you through ages — er, “tiers,” and which requires prerequisite research to unlock later options. You can construct specialized buildings on claimed tiles for your city, and they’ll either allow you to produce units or act as resource generators.

It’s a very superficial comparison, because Gladius is not a very deep game. Technically it does allow you to do all of the components of a 4X — but it only allows you to do them, because the rest of the package would not be in keeping with the traditions of the licensed intellectual property. There is, for instance, no diplomacy; you assign teams at the beginning of the game if you wish, but the Space Marines are not about to get the Tyranids on the horn and negotiate an alliance. You do not develop infrastructure or terraform to any great degree unless it’s a mechanic built in to your particular faction’s mechanics, and even then all you’re really doing is clearing a tile every once in awhile to allow city expansion. You’re not building wonders of the world, though you do have an “Influence” resource that allows you to spend on… well, what do you think a Warhammer 40K 4X encourages you to spend on?

Combat. “In the grim darkness of the future there is only war,” after all, and this game is premised on the idea that people played Civilization VI for the combat. Everything is geared to it and tuned around it; you’re moving your little men around the map to engage in slow, only slightly animated, usually 3-4 turn long firefights with the enemy factions. Emphasis on “slow” — on default game speeds, most units take 4-6 turns to come out, and unlike in the Civilization games there isn’t some production rubric that lets you speed things up; it’s just a set, specific turn limit. There doesn’t appear to be any way to buy completion; you just need to let the timer run its course. 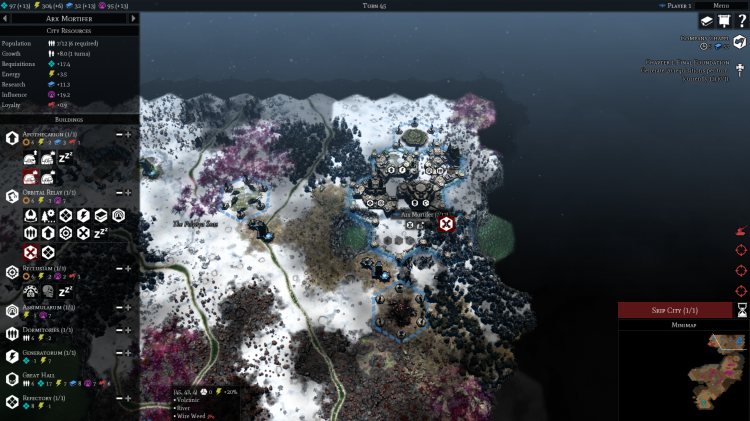 This leads to strange balancing decisions, and to the Space Marines oddly being one of the least flexible, least powerful armies in the game — this is at least an interesting balance decision. Partially this is due to the fact that Space Marine units are on the whole more valuable one-for-one than any other faction’s corresponding units, and the map is roamed by Enslaver neutral enemies that can steal them. If an Enslaver pod steals an Imperial Guard regiment or some Termagants, that’s one easily-dealt-with thing; a group of Tactical Space Marines is a whole other thing. Combat was never the strong point of the Civ games even as far back as the glory days of Civ II and Civ III — or even Alpha Centauri — but those all handled it much better and much faster than Gladius, for which fighting it out is the entire focus of the game.

There are at least some notable mechanical differences between the factions, much more in keeping with what the Warhammer 40K games have done in the Battlefleet Gothic and the Dawn of War franchises than the very slight differences present between nations in a Civilization game. This means all the factions play substantially differently from each other in terms of how fast they expand, what unit composition they prefer, how often they get to make new troops, and so on; but nothing is ever really different because the combat resolution mechanics are always the same: you smash your unit against their unit, take away some bit of health, and repeat. Sometimes you use a special ability first; usually you don’t, because the cooldowns on those are also very long.

The Tau expansion was released recently, and we’ll be looking at that next week with a bit more of a deep dive on mechanics and what-not, focusing on that particular faction; having played a little bit, I can at least say that the Tau are the faction for which the developers have most brought their A-game. Given Gladius’s limitations, the Tau play pretty well. But whether that’s good enough will depend on how graciously you can tolerate a game that is just the combat from late-era Civilization. Frankly, it gets old within 50 turns.

If you really love the combat in 4X games — if you’re a true diehard who loves positioning, resource allocation over time, and hitting the spacebar a whole lot — this is probably worth it at $20 or so. Unfortunately it retails on Steam for $40, with a massive amount of DLC to get the full experience. Wait for a sale.