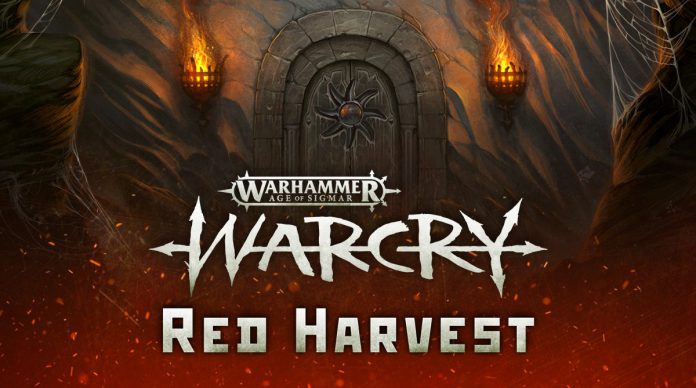 On the eve of preorders for the new Warcry box set, Red Harvest, Games Workshop has graced us with Warscrolls for using them in Age of Sigmar with Slaves to Darkness armies. They are intriguing, but will they make it into a real competitive list? Let’s take a look.

The Warscroll can be downloaded from the Warhammer Community site here.

First, the spider boys.  A very unique toolkit unit. At 110 points for 13 models they’re reasonably priced but they do have to deal with mixed weapons as 3 out of every 10 models has a different attack. Mathematically it works out to the same, as the Hit is worse but the Wound is better, and they do double on attacks so it largely works out as a positive. You also get to bring back D3 Spider Swarm each of your own turns, giving them a bit of a survivability. Reinforce the unit and you get 6 spider swarms returning up to 2D3 instead dependant on the Broodmasters being alive. The non-spiders in the unit also get a short ranged attack, something that’s a foreign concept to most chaos armies.

They’re super swift, 8″ move and being able to leap over terrain makes them very tactical flankers but they are pretty soft in combat. With only a 6+ save and no rend on their attack they likely won’t kill a whole lot on their own and should accompany another unit before charging in.

What really unlocks their power is the Cultists keyword, mixed in with the rules from the new Tome Celestial. With these rules, Cultists can obtain a Mark of Chaos and become battleline if that matches the Warlord. These guys are a prime candidate for Marks of Khorne, as with the proper buffs you can reroll hits, charges and 1s to wound with judicious use of buffs from your General and/or a Chaos Warshrine.

Overall they’re a solid, if fragile toolkit. If you can find good line of sight blocking terrain I can see opportunity to have these guys jump out and take some swings. 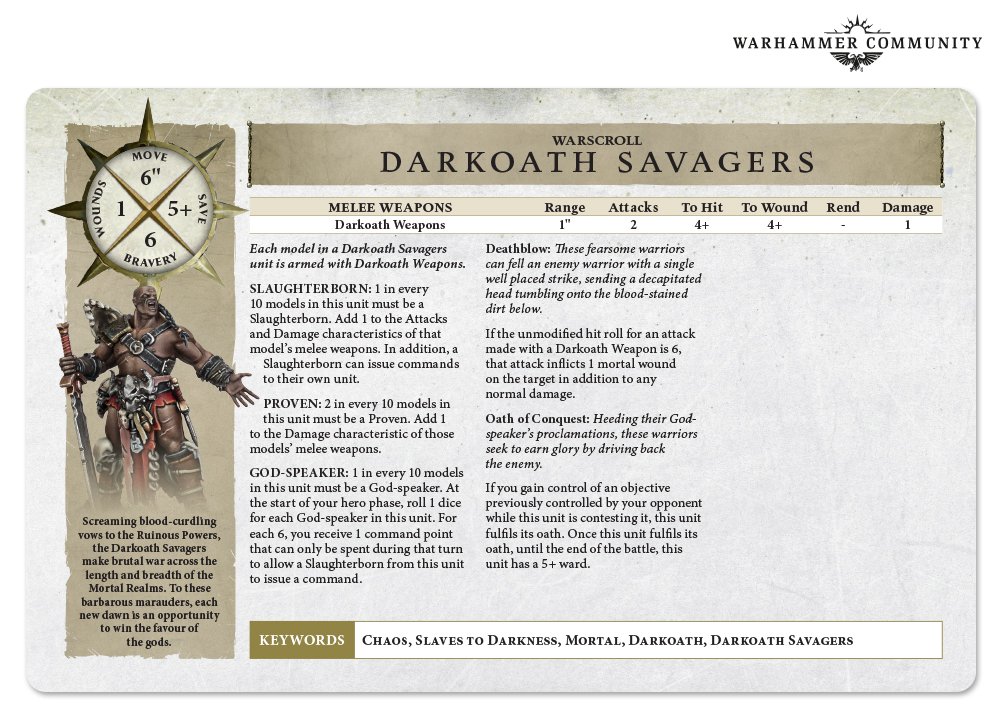 The Warscroll can be downloaded from the Warhammer Community site here.

While the Tarantulos Brood are interesting, these guys are shockingly good. These guys have a mediocre attack profile at 2 attacks per model with a 4+/4+ no rend. Nominally, everyone has the same weapon but 2 models per 10 do an extra point of damage while the Champion (Which you can take 2 of if you have 20) does extra damage and gets another swing. Any 6s do an additional mortal too! On the defensive side their 5+ save is pretty ok, but if they manage to steal a point from an opponent they gain a 5+ ward for the rest of the game. Now we’re talking!

If that wasn’t enough, the God-Speaker of the unit can generate you a CP on a 6 for the Slaughterborn to use that turn. And these are one per 10, so you can possibly generate 2 CP in a reinforced unit.

They don’t have the same boon as the Tarantulos in that they aren’t cultists and don’t have the Mark of Chaos which does draw them back a bit. There really isn’t any synergy with the two Darkoath Heroes too, which is a shame. Still, at their cost of 100 points for 10 they’re rather fairly costed. I’d argue these guys are worth bringing and reinforcing, especially if they can nab an objective early on to get that Ward.

I’m rather surprised at the quality of these guys, traditionally Games Workshop has treated the Warcry and Underworlds models as an obligation. Usually they’re not very good and are forgotten. These guys both seem like they have potential, while the Tarantulos is probably a bit too delicate and finicky to see competitive play they are still a unique toolkit to bring to the table. The Darkoath seem potentially competitively viable, even with the drawback of no Mark of Chaos.

If you have any questions or comments let us know below or email us at contact@goonhammer.com.