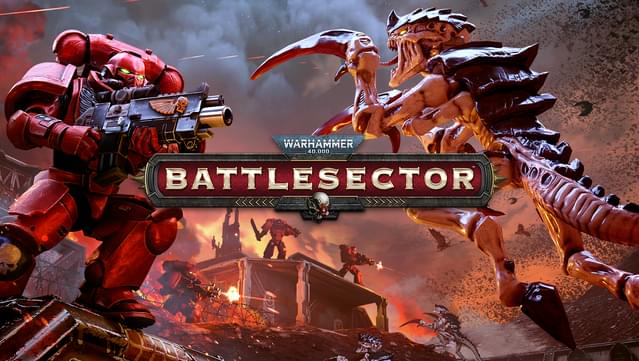 This is almost what Warhammer 40K licensed products should all be.

That’s not prescriptively true, of course; far from it. The Warhammer 40K universe is big enough to fit in all kinds of titles, from third-person character action games to Diablo-like ARPGs to first person shooters to real-time strategy to — sigh — arcade-y flight sims made for mobile. So long as the studio can execute on the concept within the concept’s own purview, that’s enough of a creative justification for the game itself to exist.

But the beating heart of the franchise is the tabletop, round-based experience, and that is best represented in a turn-based tactical experience in its licensed video games, at least to my mind. I don’t think it’s a coincidence that my favorite previous entry in the licensed library was Warhammer 40K: Mechanicus, which is a turn-based tactical experience with a smaller scale than most 40K titles aspire to, its army sizes being more akin to the Kill Team ruleset for skirmish play on the tabletop or Final Fantasy Tactics encounter sizes rather than war game-scaled battlefield modeling. Similarly, one of the most disappointing turn-based 40K licensed products, Warhammer 40K: Gladius, abstracts the combat too much in a respectable but ultimately unsatisfying attempt to hammer the franchise’s very well-defined square peg into the already-too-small round hole of a budget 4X.

Warhammer 40K: Battlesector gets the balance just right; judging the title on what’s there, Battlesector is one of the best Warhammer 40K licensed games ever produced. To the extent that there are complaints to be had about it, they’re more centered on what’s not present in the package for budget and development reasons than on what is. 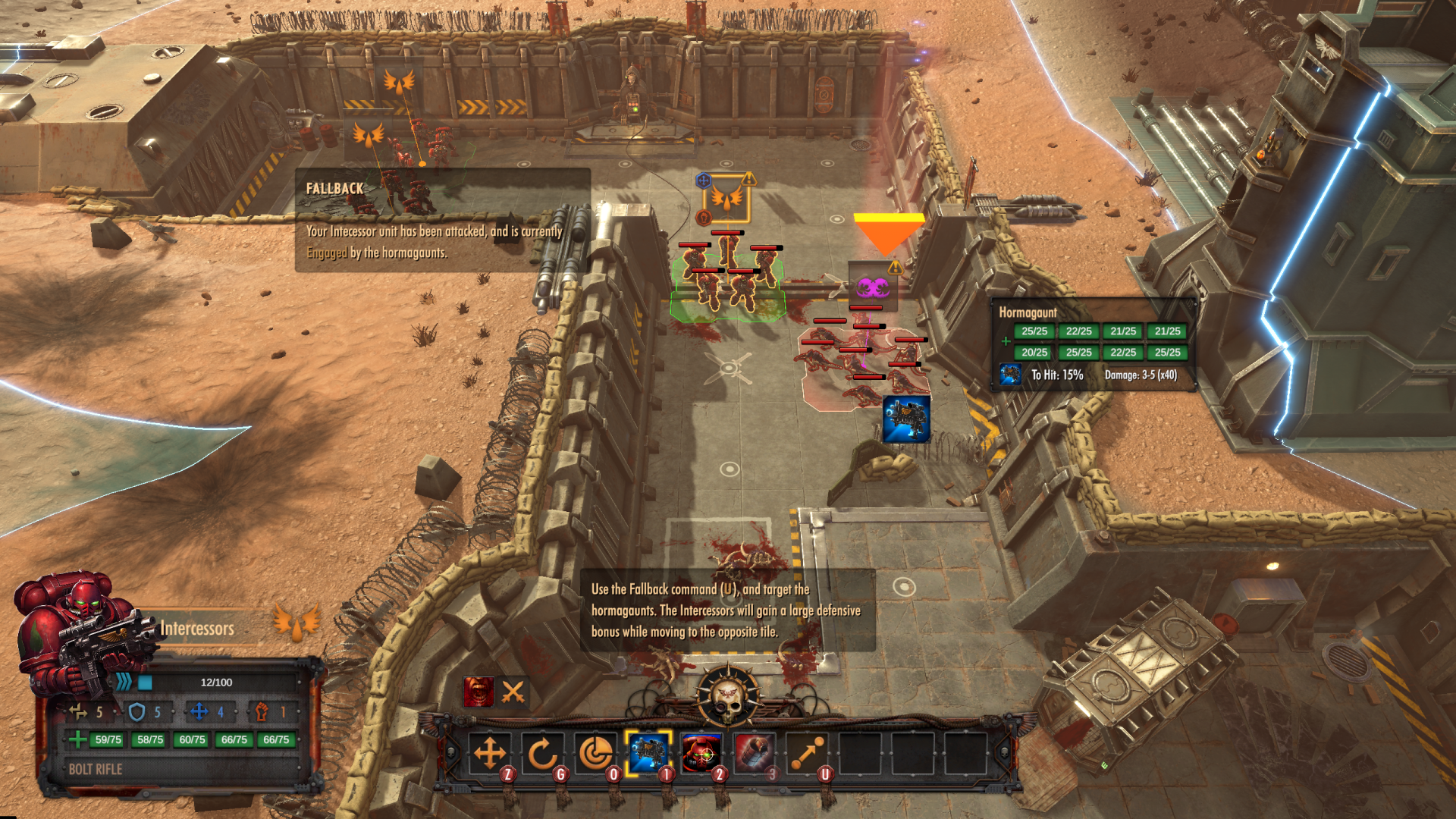 Outside of the tutorial text explaining one of the more interesting boutique tactical moves the Space Marines have, this is the usual state of the UI, which I think is a quite nice balance between informative and clean.

Let’s start with the high notes: This is a challenging, intelligent turn-based tactics game that envisions itself as taking place between pieces on a board, rather than attempting to present the fluid X feet of movement model that tripped up Necromunda: Underhive Wars so badly, both from a gameplay and, I highly suspect, a technical perspective. Terrain is abstracted into merely providing a quartile cover system (terrain can make units a quarter, half, three-quarters, or fully obscured from enemy units, which imposes a sliding scale of consequences from a small aim penalty at quarter to a complete inability to attack at full), so that while each round or acid burst that the Space Marines and Tyranids fire is individually modeled as a hit/miss calculation, each one doesn’t have to independently engage with line of sight and physics engines; it just rolls a die against a sliding target. This is important, because it allows the tactical consideration of “how much fire are my units putting on this target” to matter without having to engage with “the terrain hit detection here is bullshit, I totally had pathing to this or that model.” This level of abstraction means that the tactics that matter here are tactics of army composition, squad-level positioning (that is, questions like “are your Assault Marines properly screening for your ranged Space Marine units, and if not, is that because you’ve jumped them behind enemy lines to cause havoc in the enemy’s back ranks?”), facing, and distance, instead of favoring extremely technical terrain play that sometimes gets overruled by a mystery box judge whose rulings you can’t appeal.

The mechanics are simple, and provide a lot of room for riffing and experimentation in their simplicity: each unit has a bastion of move points, which represent the board spaces they can move on their turn, and a bastion of action points, which represent the actions they can take on their turn. Actions consist of the attack abilities that correlate with each of the model’s equipped weapons, some of which have cooldowns, some of which do not. Additionally, each model has special abilities with zero action point costs (almost all of which have cooldowns) that change how the model functions: the Space Marine bolter infantry have a stance that lets them sell out for ranged accuracy, for instance, at the expense of taking more damage; the jetpack-equipped assault squads have their jetpacks in this conceptual space as well. There are no phases; a 5 move point, 1 action point unit can move 5 squares and attack; move 2 squares, attack, and move 3 squares; or move 6 squares, as action points can also be directly turned 1-for-1 into extra move points. While the Land Speeder has hardly ever been the cornerstone of Space Marine armies in the licensed video games produced in Warhammer 40K’s modern era, they’re quite useful in this game for their ability to advance, tear through a Tyranid unit from four squares away, and then retreat to the rear of the formation or simply kite away out of range. Given that you cannot move through friendly units in this game (positioning matters, after all, especially in tight spaces), the option to move-attack-move so that multiple units launch attacks from the same square on the battlefield map on the same turn is a powerful tool in your toolkit. 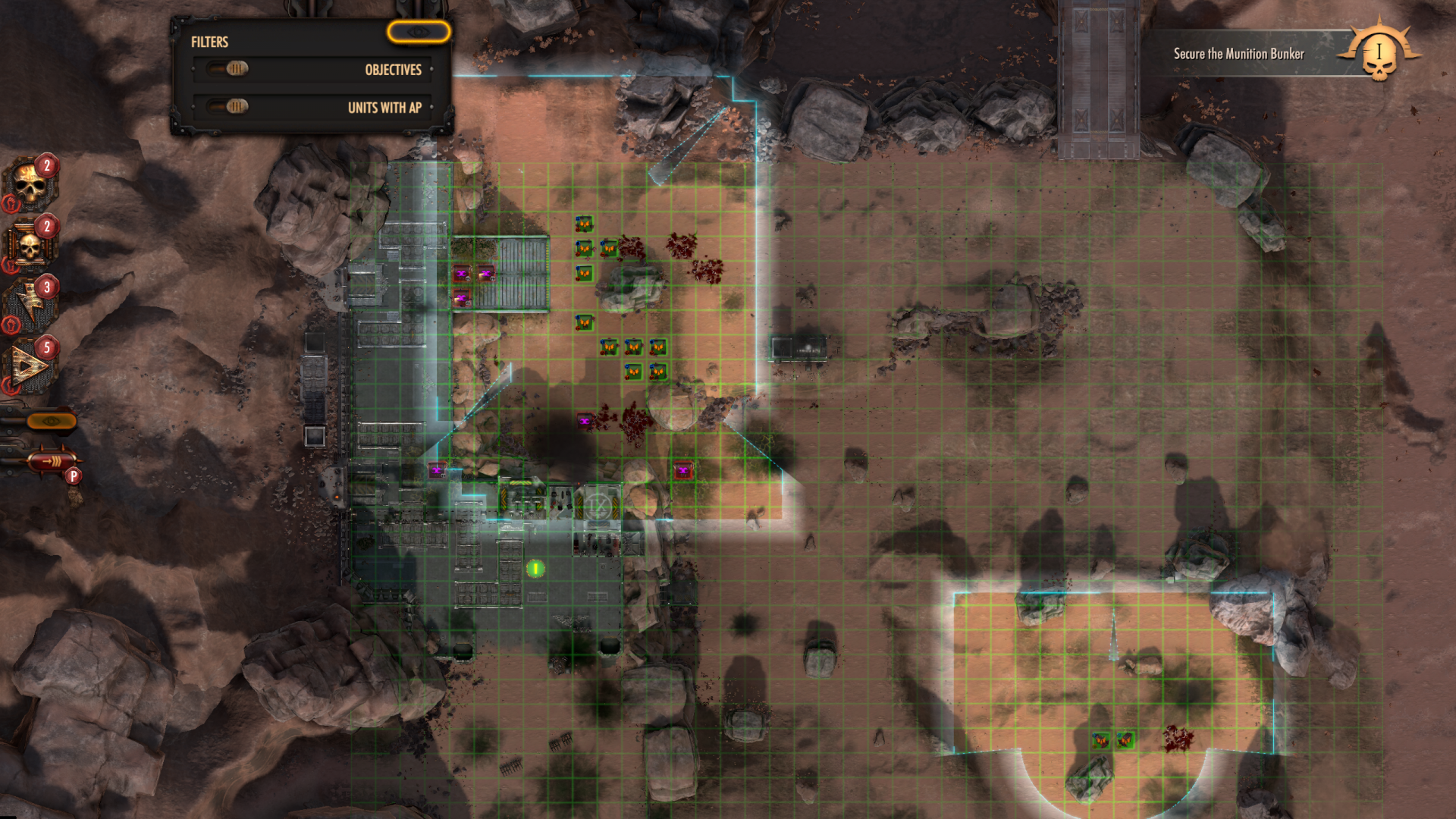 The excellent, useful map screen that comes along with each mission. The AP filter in the top left can be especially helpful.

If there’s one design element where the game almost gets a bit out over its skis, it’s the momentum mechanic, which is designed to incentivize — or more accurately, provide a reason for the player to engage at all in — aggressive play that doesn’t rely on overwatch traps or excessively cautious positioning engagements that drag out turn over turn. As you attack and kill enemy units (specifically, the models in those units, though you’ll get a big hit when the full unit finally goes down too) the units doing the attacking and killing will build momentum, from 0 towards 100. Once a unit hits 100, they get access to a pair of spender options: Empower, which allows the unit to use an improved version of one of its abilities, or Surge, which just flatly gives them a free action point. Every time you have a unit overwatch, however, they lose 10 momentum; if you’re playing a reactive game, as arguably you should be doing as the Space Marines against the Tyranid hordes, you’ll only be interacting with this mechanic on a couple key units (most notably your heroes). It seems more useful in general for Tyranid players, though it’s hard to test that out in a controlled environment given the lack of single-player content for that faction, and perhaps that’s how it should be.

That brings us to the big problem with the title, such as it is: it’s a $40 budget mid-tier release and it has the content to match. The only two 40K factions that are fully playable in the game are the Space Marines and the Tyranid Hive. It’s interesting and welcome that the Space Marines here are represented by the Blood Angels, in one of the first clear moves away from the Blood Ravens chapter that was created for the Dawn of War titles and, though popular and back-ported into official setting material, have sort of been the designated Videogame Space Marines for the last little while — of course, the Blood Angels are so close to the Blood Ravens in name, colors and aesthetic that casual players are likely to wonder why the theatrically bombastic British giants in red armor now seem obsessed with space vampirism or something. But outside of a cameo by a third faction in the single-player campaign, the Space Marines and the Tyranids are all you’ve got, and presumably all you will get unless the game is a big success for Black Lab and Slitherine, the developer and publisher respectively. And I hope it is! It’d be really cool to see the Sisters of Battle or Aeldari or T’au or all three added to this scheme, each with their own unique momentum mechanics and gameplay priorities, and this is a title that deserves that kind of post-release build up of content. It just seems like when games like this launch with so little content, even when the content that’s there is very good it’s hard to get that snowball rolling down the hill. 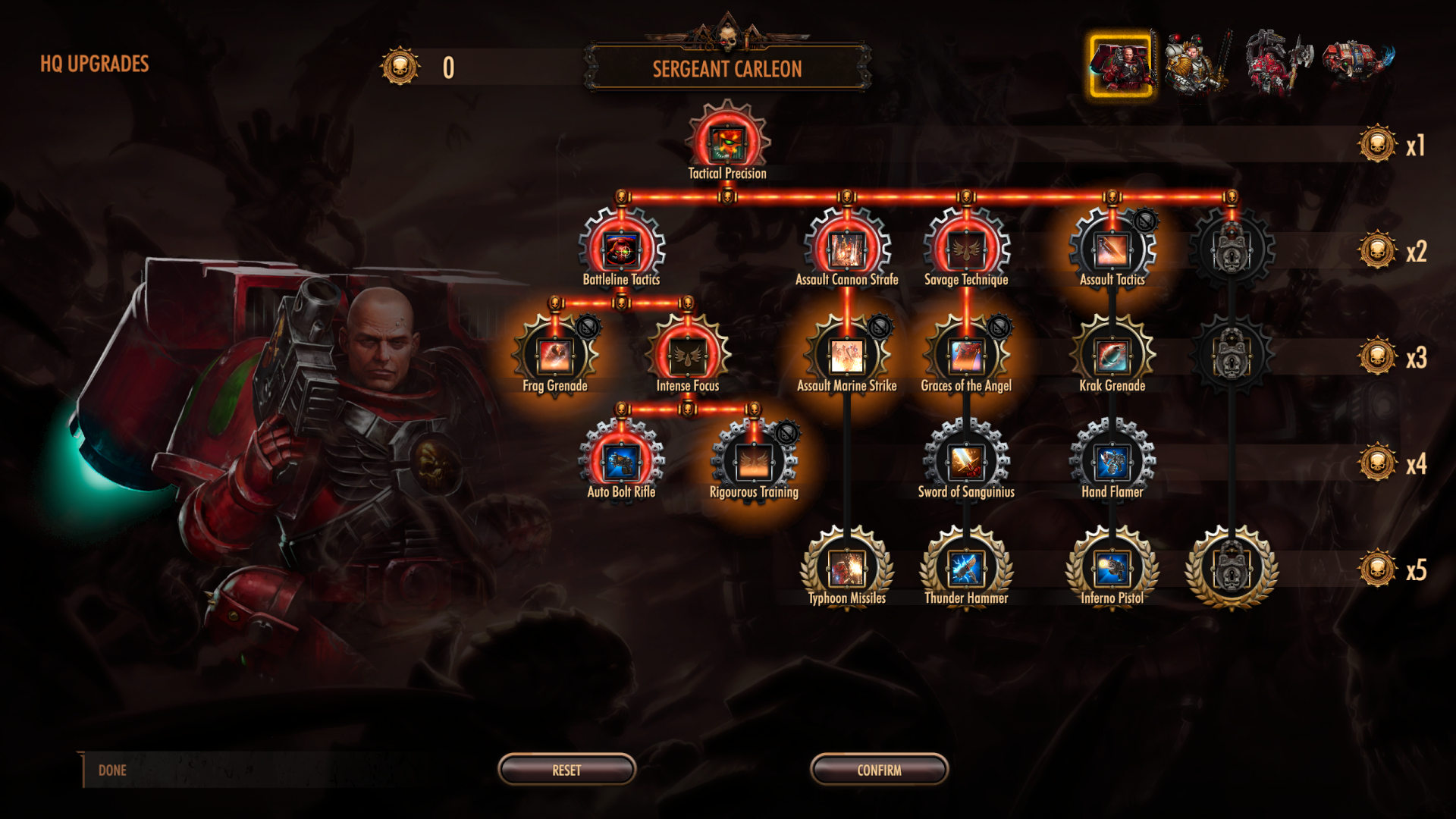 Meta-progression in the single-player campaign is expressed through hero-based upgrade trees; it’s functional but barebones, like most of the content outside the core tactical engine.

But to be clear, that’s basically my only complaint: that there’s not enough content in this $40 package and that I want to see a bunch more of this developer’s takes on 40K tabletop factions, even if it has to be in sequel $40 price-point games where it’s now the Sisters against the Aeldari or the T’au against the Chaos Space Marines instead of additional bolt-on content to this title. To be honest, I personally don’t feel like I’m missing out on any great narrative beats by not getting a full Tyranid campaign here, but that’s because exclusively among the 40K factions, the Tyranids pretty much always work better as the antagonist menace than as protagonists; I would want duelling campaigns for either of the above two matchups.

The game looks excellent and runs well; you can zoom in to see a lot of great character detail on models for both sides and the lighting and effects suites are where you’d expect them to be on a full-priced last generation title. Thanks to some notorious day one faceplants, Warhammer 40K licensed products have gained a bit of a reputation of being buggy, performance-hogging messes even when there’s a good game buried underneath; my experience with Battlesector was relatively stress-free outside of a PSU issue I’m almost absolutely certain had nothing to do with the game itself (that is why this review is out in August, not July). If you’re into the Warhammer 40K license being used to make quality tactical games, you’ll get this at full price now on Steam for $40; I don’t generally go in for the Team Games approach to consumerism, but this is one of those rare circumstances where letting the devs (and the people who make the decisions above their heads) know they’ve made a good one is more important than waiting for sale price, at least to me.