At some point you have to sit down and have a conversation about the brand, and just who is allowed to futz with it.

Today’s game is Warhammer 40K: Dakka Squadron – Flyboyz Edition, which is the PC release of the mobile game by the same name. I’ve been avoiding it for some time for reasons that are probably obvious to anyone who has watched gameplay footage of it, but I’ve run out of backlog and will hopefully secure more time from the glorious Goonhammer editorial staff to really luxuriate in my next review target, the Mass Effect remaster, by getting this out of the way. Dakka Squadron is, optimistically, an arcade arena shooter in the vein of your Star Foxes and similar titles. It has a lot of problems. 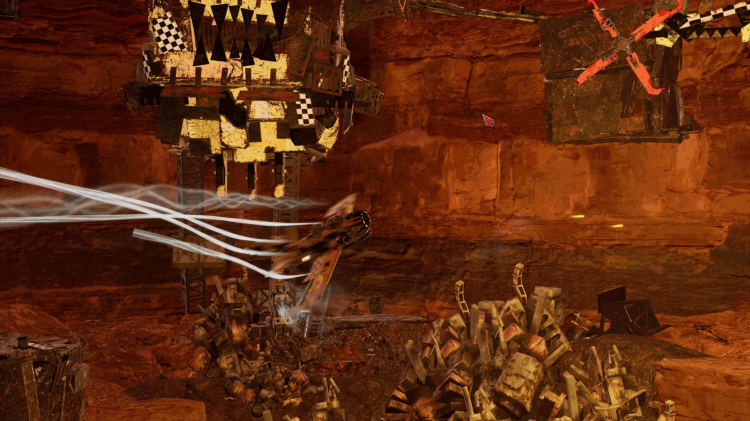 You know you’re in for a treat when you can see the mouse cursor in the pre-title screen cinematic.

The first is that if you’re motion sickness sensitive, don’t pick up this title. Every time you move either the left or right sticks on the controller — and this game “plays” much better on controller — the camera is going to do something stupid. With the left stick, it’ll crash zoom on your plane until you stop moving the stick, at which point it will zoom out. This means that any time you try to make minute adjustments to your heading, the camera is going to rubberband in and out on your ship. During dogfights when you’re always holding the stick down, your effective field of view will shrink — at the very time when you want as much of the screen as possible. This is almost certainly a kludge-y solution to improve performance on mobile devices, to limit the amount of rendering the phone or tablet has to do while doing actual gameplay things and get some savings anywhere they can. This is unnecessary on PC — almost any PC, this game is not resource-intensive in the slightest — but since it’s a straight port, that part of the design remains in. If you’re feeling very generous, you can chalk it up to how difficult it would be for a sentient football hooligan fungus to pilot a fighter plane. 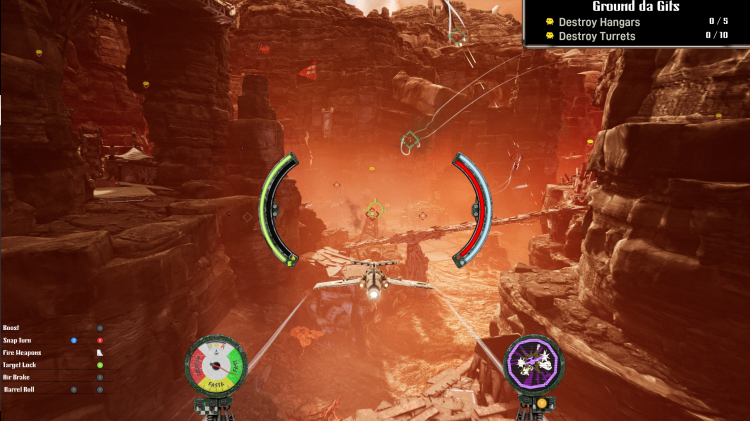 Add in the color palette and draw distance haze and it’s a wonder anyone on mobile could see a thing.

An additional knock-on effect of it being a mobile port is that all the UI is towards the center of the screen, where the gameplay should be happening — after all, it’s much easier to build your UI for the smallest screen supported and then let those playing on larger devices enjoy their extra space in the margins, rather than scale the UI for every possible screen size in the smartphone and tablet market. On PC, adjusting the UI for the resolution is an expected part of shipping a title — but that would require an overhaul that this port wasn’t budgeted for. So it sits in the middle of the screen and you’ll either adjust or go do something else with your time. 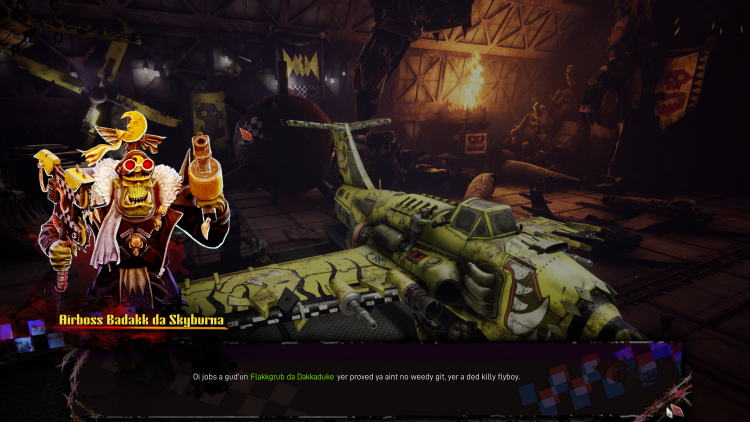 All the plot stuff is done in this visual novel style, and don’t worry, it’s all written in Ork.

Once you do get the hang of playing the game without vomiting, you’ll be confronted with the reality that to master it, you’ll have to get used to very conservative, temperate play — small motions, careful flying, and staying far clear of your true enemy more so than any other Ork in this game: Collisions. Now, collisions with the enemy aren’t so bad; your fighter is designed for them, and you get damage bonuses when you instigate them. Collisions with the terrain or, even more infuriating, allied fighter planes do full damage, however, and your allies are idiots who follow you around a dogfight, occasionally shooting but mostly existing as additional obstacles to dodge.

Then there’s mission length: they’re really quite long, much longer than I expected out of a mobile port, and that’s not a compliment because the majority of the length comes from aggressively-tuned enemy health bars. Your first duel against an Ork ace will take you upwards of fifteen to twenty minutes to finish, not because it’s particularly difficult or because he’s got a bunch of interesting phases but because the fight design is to have an absolute tank of hit points and armor constantly in full evasion while slowly titrating other enemy planes into the combat arena to shoot you while you chase him. Don’t crash into anything, or you’ll get to start all over! 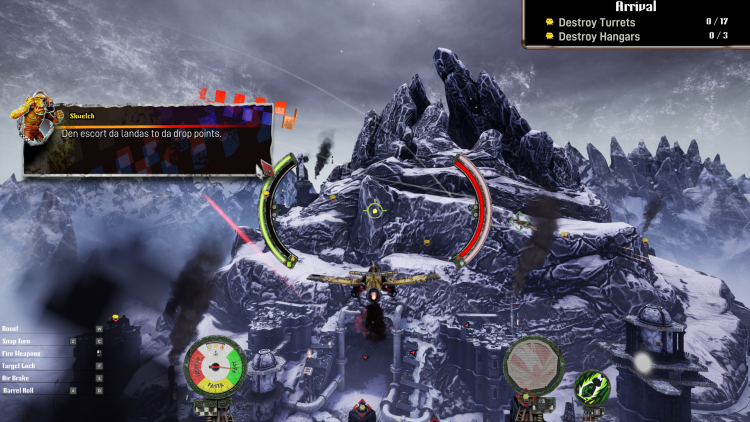 There are landscapes colored something other than yellow and brown in the game!

Most of the review footage you’ll find of this game is stuck in the opening yellow-brown desert biome, because most reviewers quite rightly didn’t want to stick with the title further; I did have the wherewithal to get to the second world and can confirm the ice planet biome leads to a lot less yellow-brown on yellow-brown than the first world, which is a relief. However it also introduces bomber missions, which are so infuriating that I more or less gave up on the title right there. If you’re going to continue into those, be prepared for missions that are even longer and require even more conservative play than the fighter missions of the desert junk world. 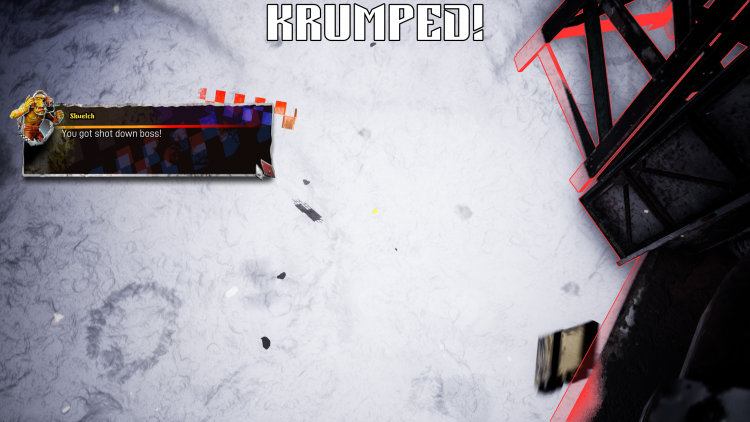 But most of your time spent there you’ll be seeing this screen.

If you do want to play the title, and there are reasons I suppose — if you’re a fan of the WH40K Orks, there’s a lot of them in here, and even the menus are done up in their inimitable patois — there are some things you should do first. The change I recommend the most if you’re playing with controller is to go into the key bindings and swap the mapping for both “Snap Turn” buttons with the mapping for the “Fire Shooty Dakka” and “Fire Beam Dakka” buttons. I’ve provided the default mapping below: you’re moving the turns onto the D-pad while moving attacks onto the face buttons. I have absolutely no idea why they thought it was a good idea to map attacks (those are attack buttons, not toggles to switch to e.g. Shooty mode) onto the D-pad, but they did. As an additional benefit, changing the functionality of the B button (or equivalent) on your controller from “spin the plane 180 degrees” to “fire a gun once” will help out if you’re in the habit of hitting B to exit the game’s menu, because as Dakka Squadron leaves the menu and returns to gameplay it will read that B button press as game input. 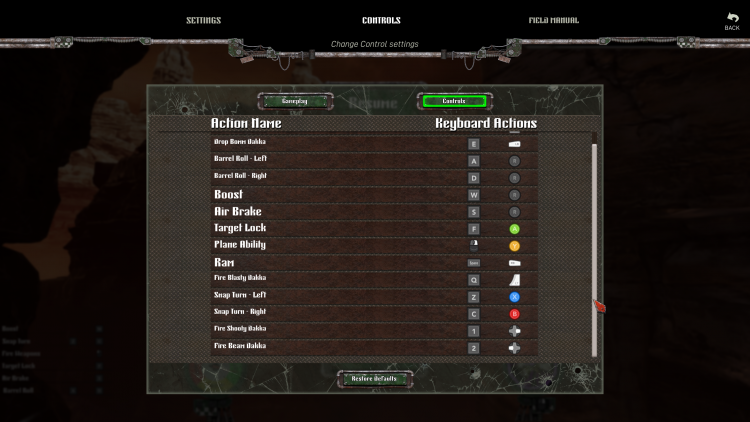 Don’t ask me what they were thinking with the font size choices; I don’t know either.

You may want to think about playing with keyboard and mouse, however; the way the game integrates controller support involves oddly slaving your cursor to your controller’s left stick at a system level while not respecting the controller’s dead zone settings, so if you alt-tab out of the game, you’ll find your mouse cursor wandering across the screen. Don’t worry, your mouse isn’t broken; this game just takes some shoddy shortcuts. But you’ll probably want to avoid tabbing away from the game too much just as a rule, because when you tab back sometimes it softlocks your mission like in the screenshot below. 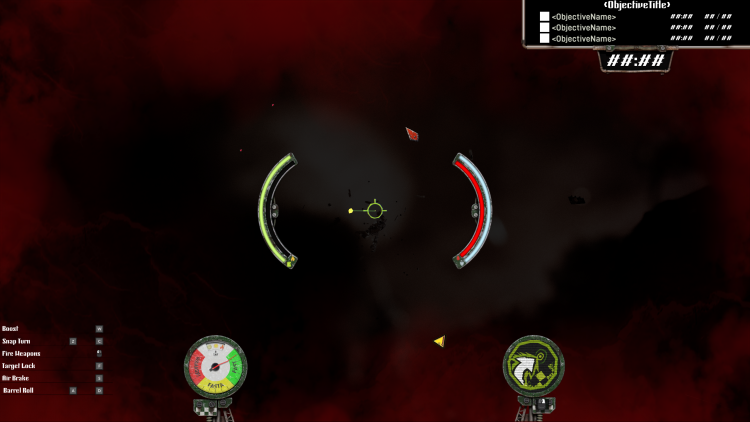 At least I’m apparently still at full health and armor! Wherever I am!

There are a couple bright spots in here, specifically from a lore standpoint. The standout part of the game is that the colors you paint your plane, each corresponding to the colors of a specific Ork clan, actually make a mechanical difference to how your plane performs. For instance, Orks believe that Goffs are tuffer den deez otha runts, and so if you do your fighter up in black, you get bonuses to your plane’s armor and hull toughness. This is an excellent way of both making cosmetics something that matter and integrating the Orks’ whole motivated-reality gimmick. If someone does eventually make a good Ork-only game, it’ll involve a lot of thoughtful little tricks like that. Unfortunately, this is not that game.

I don’t like writing reviews like this! I like it when the games are good, and especially when the games that are made under the brand aegis of the products this site covers are good. So far we’ve given pretty middling reviews to the titles that have come out recently bearing the Warhammer 40K name, and I think the market has mostly agreed with us: outside of now-decade-old Dawn of War games and Space Marine, the brand has offered titles that at best appeal to niche audiences (Mechanicus; Battlefleet Gothic) or had a long, slow climb towards being worth the investment (Inquisitor). Maybe Darktide will be the title that finally gets this property back in the game. It certainly won’t be Dakka Squadron.

It’s $20 on Steam but there’s a free PC demo available there as well; I highly suggest you avail yourself of ten minutes with it if you feel compelled to buy this game and see how you feel afterwards. If you want to jump right in, well, Steam also permits you to get your money back any time before you play two full hours of it. Video games are hard to make and I don’t begrudge the team that made this game having to bring an Ork-centric arena flyer-shooter to market. But they’ve certainly moved on by now, and so should you.