The Warhammer Community team dropped a large helping of information on Overwatch today, with a new article on Warhammer Community as well as a discussion between Stu Black and Eddie Eccles on Warhammer TV. While we don’t publish all of these as posts, we transcribe them to use when we do our weekly round-up of rules. However they’re very popular and some news is so big that we don’t want to wait for the weekend to talk about it. Today is one of those days.

Overwatch is now a universal Stratagem. Note that these are now referred to as Core Stratagems.

This has a few major consequences! The first is that Overwatch costs CP to use, making it a much more expensive action to undertake, and something you’ll often just not bother with if the best-case scenario is just dealing an extra wound or two. The second is that it limits you to using Overwatch once per Charge phase, meaning that if you’ve got multiple chargers you can cleverly work out your actions to prevent an opponent from using the Stratagem.

Overwatch still happens before the charge roll is made and still requires you to roll a 6 to hit, irrespective of modifiers and can’t be used if you’re already in Engagement Range with an enemy unit. 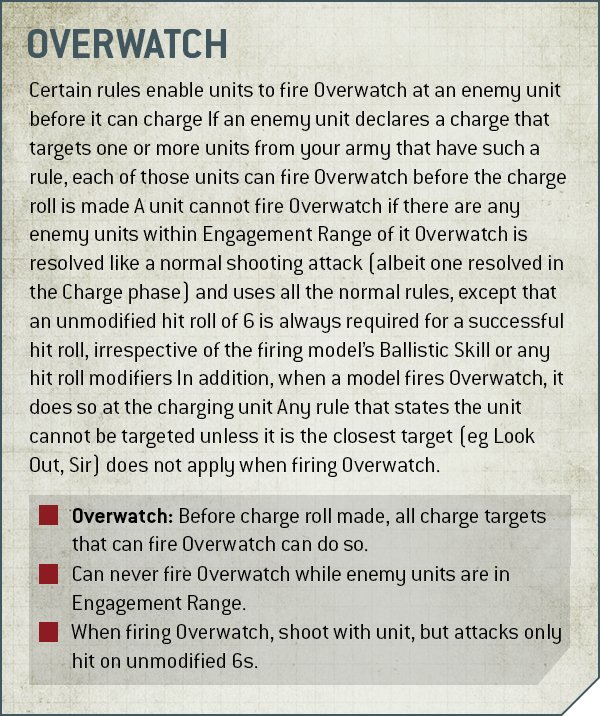 Notes: This is something that melee-focused armies are salivating over. It makes charging from the open much more viable, particularly with units of squishier units like Bloodletters or Daemonettes. It also hammers home the utility of flamers – you are much more likely to use the Stratagem if you know you’re getting full hits rather than just one per six shots.

We saw Defensible listed as a Terrain Keyword in last week’s update on terrain, but didn’t have any clarification into what that meant. Now we know that it provides bonuses to units that occupy it. Remember that in 9th Edition you and your opponent will agree on what traits each terrain piece will have at the start of the game; this trait is intended for things like ruins or bunkers or other features where models can dig in and prepare for an assault.

Defensible terrain gives INFANTRY units the option of either Holding Steady or Setting to Defend.

This was given on the stream as another example of making the battlefield more dynamic and interesting.

What we still don’t know: We still don’t know when you make this choice; if it happens when you first enter the terrain, or it’s a decision that is made when a charge is declared. The latter seems more likely, but the timing will matter. It may also be an Action, so maybe you have to give up shooting or something for it.

Callbacks and Interactions: We know that GW intends Ruins to be defensible terrain, thanks to the terrain article we saw last week. Also remember that this has some interesting interactions with the Heavy Cover trait. Models don’t get the benefit of Heavy Cover against an opponent that charged, which puts the pressure on enemies to take the initiative. On the other hand if you’re in Defensible Heavy Cover terrain and your opponent is not, you have more of a benefit to sit back and force them to come to you, or take an aggressive posture and charge them first.

Kevin: Holy crap this is all incredible. Not only does it drastically reduce the mental workload from rolling dice with no significant probability of success, but it’s a really cool indication of the philosophy that GW seems to have for 9th Edition. Meaningful choices with consequences, a dynamic environment, and much needed boosts to melee forces are all music to my ears.

TheChirurgeon: I’m a big fan of these and yeah, it’ll be good no longer having near-pointless Overwatch in the game. This makes having flamers and other high-impact Overwatch weapons more valuable, and gives melee armies more room to operate. Sadly, it does make Warp Talons less crucial, but I’m certain that turning off Overwatch completely will still have value.

Jack: As a gunline player, I love this. Rather than everything in my army shooting overwatch all the time, I now need to think about screening with a unit that’s specifically good at overwatch – and having some countercharge because I probably won’t be able to just scare off chargers entirely. It also gives me reason to use abilities to buff my overwatch, as I want to maximize what a single unit can do. I’m looking forward to having more reason to use the Fortress of Resolve Imperial Fists litany to buff up my screen.

Liam: Hey, look, depth and nuance to the game. This is the kind of stuff that was missing in 8th edition – the stripped back rules were great for reducing complexity, but a lot of the time there was a lack of decision points or skill-based elements where you were making choices more complex than “point gun at most important unit, roll dice until that unit is dead.” 9th looks to be bringing back some of that detail, which is great.