The Warhammer Community team dropped a double dose of information on vehicles today, with a new article on Warhammer Community as well as a discussion between Stu Black and Eddie Eccles on Warhammer TV. While we don’t normally publish these as posts, we transcribe them to use when we do our weekly round-up of rules. They’ve been really popular and today’s update was so massive we felt compelled to share the information right away. 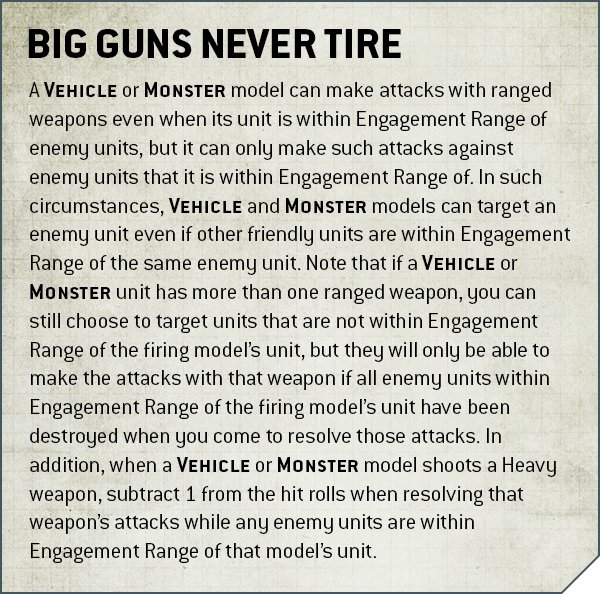 What’s changed with tanks and monsters in the new edition?

Quite a few things. Some are inherent to tanks and monsters, others that have changed in the game that will affect them. Tanks being able to shoot into combat is the biggest thing, as units within an inch can choose to shoot out with their guns (see the rule above from Warhammer Community). There are some restrictions, such as a -1 to hit penalty when shooting heavy weapons against targets in engagement range. Blast weapons also cannot be used against targets within engagement range.

The reason for this is narrative and gameplay reasons. Heavy flamer sponsons don’t care about being surrounded by hormagaunts; flame on. You declare all of your attacks before you shoot (previously you couldn’t declare invalid targets), so you can declare your anti-personnel weapons to clear off infantry and then use main guns to target a second threat. The risk is that if there are survivors then you can’t fire. This is an example of the kind of tactical decisions that GW wants more of. This applies to all VEHICLES and MONSTERS, including Dreadnoughts and Walkers. This supports “all-rounders” that have both melee and shooting capability.

There are other rules that will benefit vehicles:

Based on playtesting, which forces get the biggest boost?

Tyranids for sure. Imperial Guard as well. Being able to use things like pintle-mounted weapons in melee will make them viable. Basically anything with a mechanized force or a bunch of monsters. Sisters of Battles with Immolators will be happy.

Is there room for specialization?

There’s room for both generalists and specialized units. Specialists give the option to be great at one thing but face threats that you might lack the tools for, while generalists better at everything. Stu said the designers are repeatedly told “how do we give people choices that matter” in all stages of play from army building to tactics. The goal is to make the game more about choices and less about pure random luck. If you built a model with a generalist configuration because you thought it looks cool you’ll no longer be penalized for making a sub-optimal configuration.

Do you expect to see less bubble wrapping?

Castling is less effective now that missions are more dynamic and vehicles can hold their own in combat. Having mobile weapon platforms that can claim objectives and hunt down threats will be more beneficial. Tanks are designed to be more like hammers that smash enemies instead of glorified artillery pieces. The game will be less static combat thanks to new missions and more terrain.

What challenges will vehicles face in the new edition?

The big challenge will be that with the changes to terrain it will be much harder to get a clear view of the battlefield. No choosing a place to sit and hit everything. Have to move a lot more. Vehicles will not be able to enter certain pieces of terrain, requiring infantry and encouraging combined arms forces.

This is a major change: the -1 hit penalty for moving and firing heavy weapons will only apply to INFANTRY in 9th Edition.

Will we start to see more vehicle or monster heavy armies?

Yes. 9th Edition “throws all the jigsaw pieces in the air” with the changes to Command Points, detachments, etc. Goal is to have “more best things” instead of one optimal solution. Games Workshop wants great games together with different lists. Orks Speed WAAAGHs, Tyranid Monster armies, tank companies, etc. “Any army you like the look of can compete.”

Psychic Awakening – What does War of the Spider bring to Death Guard?

Hateful Assault and Malicious Volleys. Six new Relics, 21 new Stratagems. 7 different Plague Companies (including Typhus’s and Mortarion’s Chosen) each with Warlord trait, Relic, Stratagem. “30-odd new Stratagems”. It’s been awhile since DG have had anything new so this is a major update. Really brings the Death Guard codex up to the level of other books.

What is your favorite Stratagem or Warlord trait?

“Mutant Strain” buffs Pox Walkers that deal mortal wounds on sixes to wound, but it also burns them out. Who doesn’t like zombies? Typhus and his “merry band” specialize in plague zombies and get a bonus.

Questions or feedback? Drop a comment below or email us at contact@goonhammer.com.