When Hexbane’s Hunters were shown off on the Summer Skirmish preview stream, my hooting and hollering reached such a thunderous level of rowdiness that it took an entire team of Goonhammer Volunteer Security Narcs to drag me from the Goonhammer offices. I made my opinions known in our roundtable, but I’ll save you the click: I’m positively pumped about these jerks. As a longtime Empire player from the World-That-Was, I’m stoked to see the return of the Witch Hunter/Mordheim aesthetic in Age of Sigmar. It’s Warhammer.jpeg in the best way, and something that’s been missing from Age of Sigmar for quite some time. When the opportunity to review these models came across my desk, I had to throw myself into the project with aplomb.

A quick note: This is only a review of the models themselves, and my experience building and painting them. My expertise actually playing Warhammer Underworlds is woefully out of date at this point, and as much as I enjoy the game, I don’t know enough about where it’s at in 2022 to weigh in on any gameplay-related content. 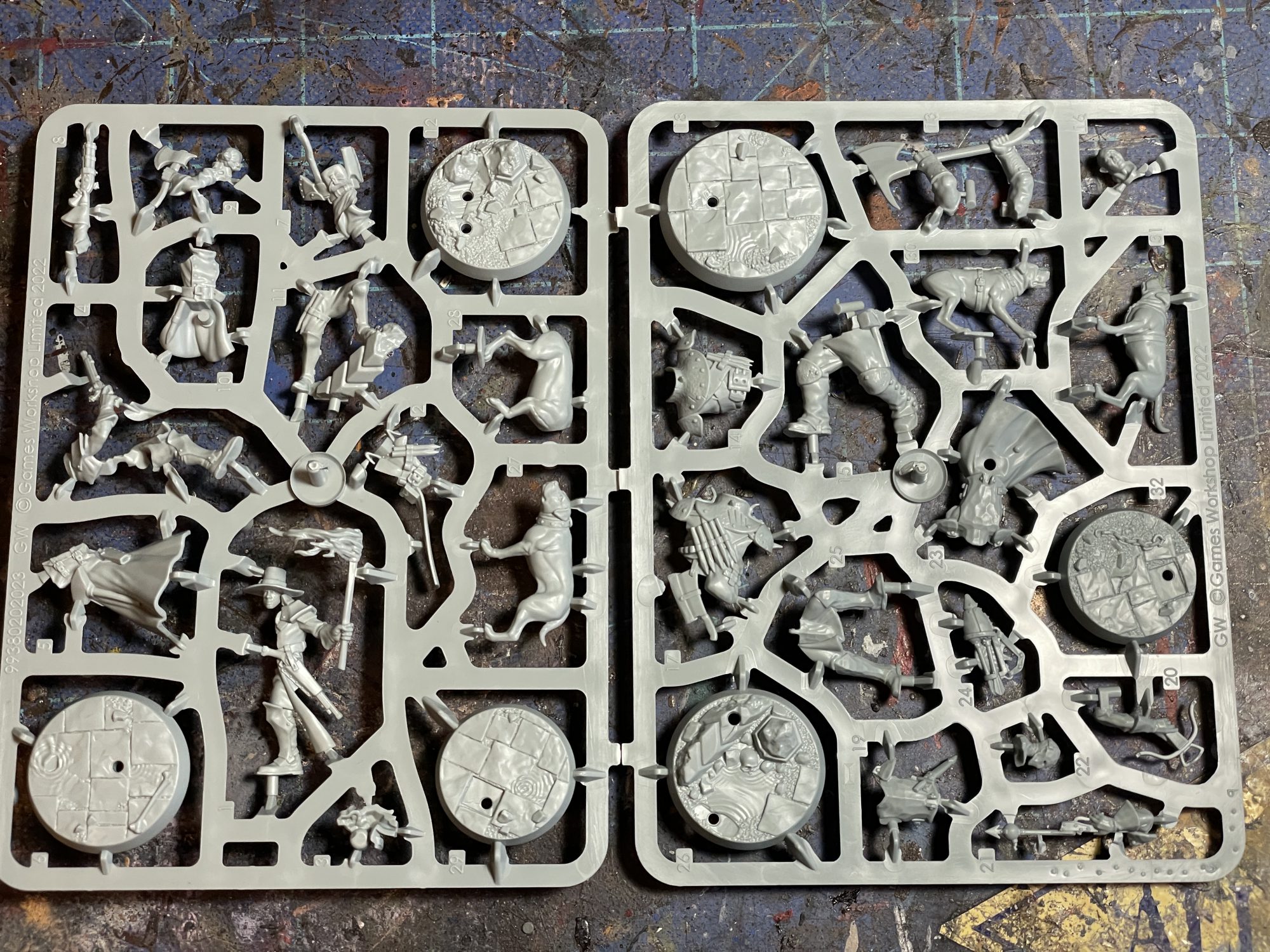 Every Underworlds warband is in a different colored plastic, and Hexbane et al. are cast in a light grey. It’s lighter than most modern kits and actually closer in color to some of the grey plastic of my youth. Assembling them is a bit finnicky; there’s a lot of those weird cuts where a piece will be someone’s head, the left third of their body and one arm and it fits into the other parts by some arcane series of pegs and sockets. The pieces are individually small with minimal moldlines, and are numbered and grouped together such that you may be tempted to skip the instructions. I fumbled them quite a few times, as some pieces can flirt with Malifaux levels of fiddly. Be patient, make sure you’re not dropping bits on a grey carpet, and dry fit first and you should make do.

Typically, I snip the ends off of all the pegs that are used to build models like this. They usually end up just a smidge too long and as a result lead to some gaps. I did this on Hexbane himself and I’ve gotta say, it was a mistake. I’d be pretty careful about trimming those down on this kit just to maximize ease of assembly. I did not attempt to build these models without glue, as they are often advertised, but I would recommend something like Tamiya Extra Thin for a minimum amount of added volume. Superglue can often add just a smidge of extra space which can sometimes add to extra gaps, poor fits, and so on. On models this fine, those gaps will show for sure.

Haskel Hexbane and Brydget Axwold, the two classically “Witch Hunter” looking models, are similar in their construction. You’ve got arms fitting very specifically, threading through their torsos and coats to arrive at something ideally pretty seamless. They’re real fiddly. Quiet Pock has all of the above concerns, as well as a two part crossbow that hides its seam fairly well, but also a quiver of bomb arrows that’s key to the whole process. It has a peg that goes through his back and into his legs, and without it the model won’t go together.

Aemos Duncarrow, the big fella with an axe, is deceptively tricky to clip out, as he has shoulder spikes perilously close to the connection points on the sprue. Sticking him together means your fingers are going to get poked by all his little spikes, but due to his heftier size he goes together easier than his compatriots. Lastly, we have the two doggos, Grotbiter and Ratspike, who I can only assume is named for the John Blanche and Ian Miller book by the same name. These two go together extremely easily, just being two parts and a base each. Ratspike’s head is one piece attached to a side of his body, while Grotbiter’s annoyingly is split down the middle. It’s not a difficult assembly, but it does make for a visible seam, even with a tight fit and some sprue goo. These two would be fine candidates for a future How To Pet Everything article, and they are extremely good doggos. 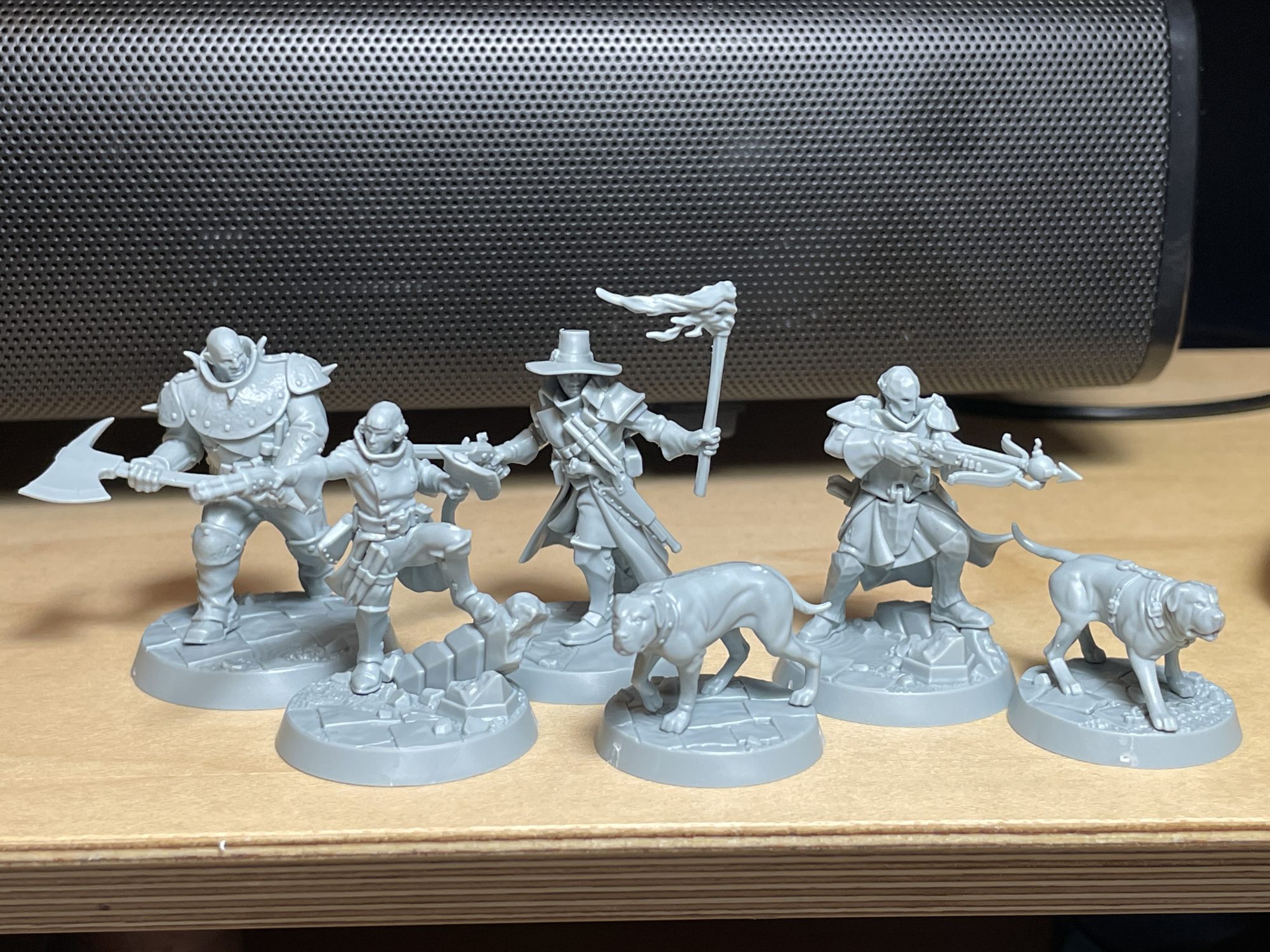 Lastly, these models all have sculpted bases with broken flagstones, fallen pillars, the odd bone or skull, and a few puddles. They could all be easily built without the bases if sculpted bases really bug you, as there are no half feet molded into the rocks or whatever.

The detail of all of these models is really something else, and the hammered texture of their armor, the wood grain on their weapons, and the subtle facial expressions they have are all the more impressive up close. There isn’t much in the way of random hanging baubles or Liefeldian pouches on these models, which I greatly appreciate. The details all feel functional without being bland, and give this crew a no-nonsense monster hunting vibe.

When it came to painting these weirdos, I figured I’d echo the scheme I painted on Jelsen Darrock back when I painted Cursed City last year. If you want to find out exactly how I painted him, peep this painting guide we did around the same time. It’s a classic Witch Hunter scheme, and one I think will work extremely well on these slightly less Vash the Stampede-looking folks.

There’s a great variety of textures on this crew, but they’re far from cluttered. Each detail is sharply defined and there’s no muddiness or ambiguity. The variety of textures makes for a fun painting experience, and so long as you keep the palette somewhat limited, everything should work out just fine.

As I painted the majority of each model in red and slightly tinted the metallics with a variety of colors, I kept the rest of my scheme fairly neutral. Getting to some of the faces can be tricky, as they all have raised collars or other details somewhat obscuring them.

There’s this great hammered metal texture on so much of their armor that picks up washes beautifully. You can see it here on Quiet Pock pretty well. This Man in the Iron Mask-looking fella also has a burned, bald scalp, which combined with his bomb arrows and heavy front-facing armor implies that he’s had a few close calls on the field. The art of him always has these wild eyes too; these models are absolutely laden with personality, and it really is like painting up a group of character models.

I painted the doggos separately as they’re not generally wearing the same colors as the rest. While I tied their collars in to the leather recipe, they were an opportunity to paint some other colors. I still kept them fairly natural, as this warband is a bit more grounded than the high fantasy aesthetic that AoS is known for. This also meant I got to spend half an hour Googling pictures of golden retrievers and black labs, which I highly recommend.

Warhammer Underpants warbands often precede a similarly styled AoS army, and if this is what we have to look forward to with the Cities of Sigmar relaunch, my backlog is in deep, deep trouble. Assembling these models is a bit tricky due to how they fit together, but I was able to do so in a little over an hour. Painting them was an easygoing experience, though I would simplify my scheme somewhat were I to expand it out into a whole army. Any quibbles I had about their assembly melted away as I painted them, and I’m excited to see what these models mean for the upcoming Cities of Sigmar relaunch.