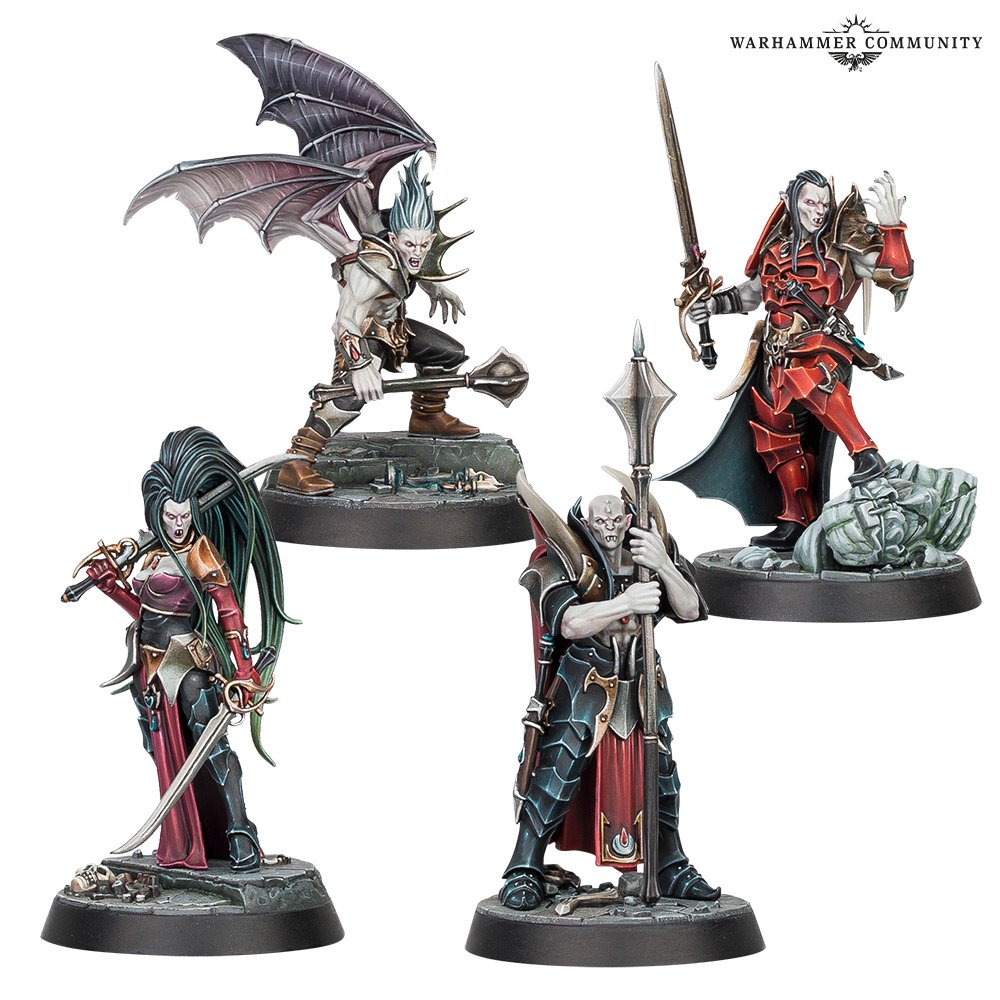 At one point we said that Khagra’s Ravagers were the coolest Underworld minis he’d seen and then like a week later we saw The Crimson Court! 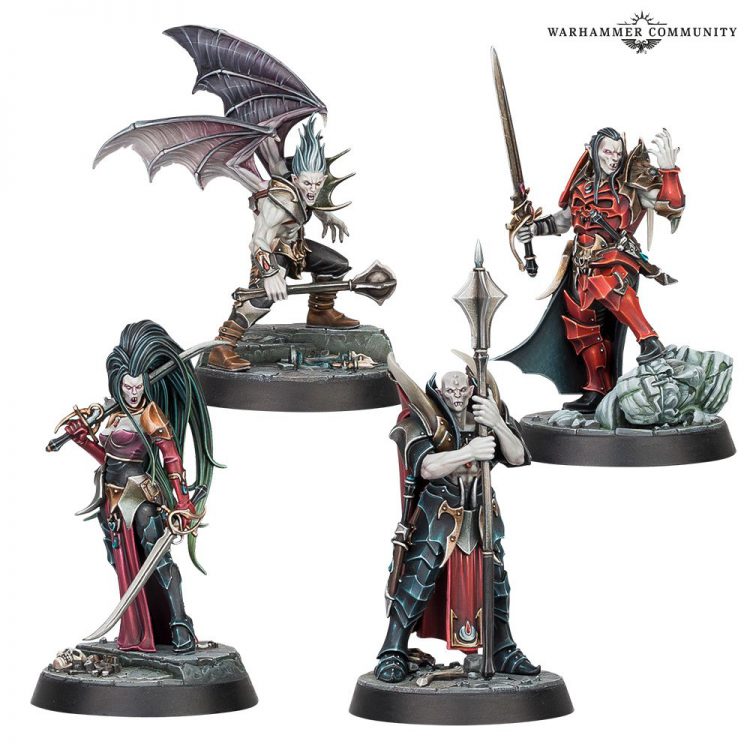 The Crimson Court is the first faction that basically has 3 states. Instead of just Uninspired and Inspired, we get Bloodthirst as well, which takes Guard away as an option for the fighter but gives them other utility. It’s basically a separate Inspiration path, giving them a bit of flexibility in how to proceed into later stages of the game. 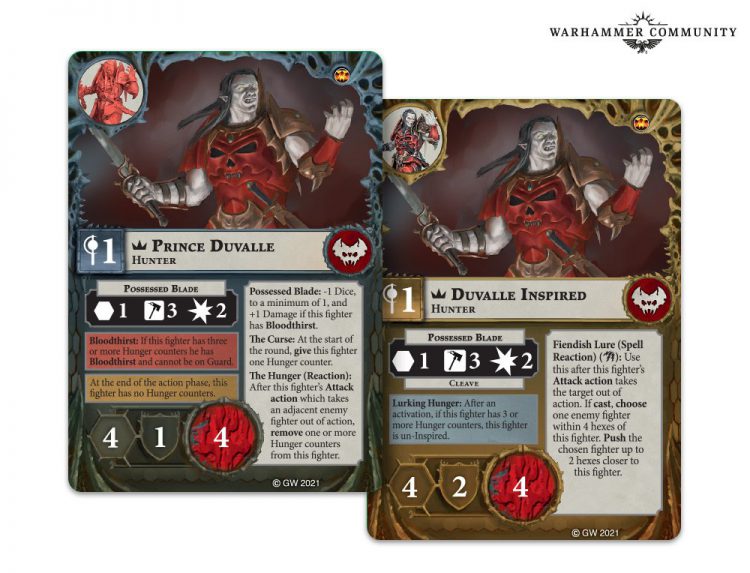 Prince Duvalle is your Leader, who is also a Hunter and a Wizard (letting him auto-score Master of Many Paths). He’s got a nice, reliable attack, that becomes harder hitting but less reliable when you Bloodthirst, or gains Cleave when he Inspires. By leaning into Bloodthirst, he gains damage, but by clearing Hunger and Inspiring, he gets defensiveness, reliability, and a utility spell. 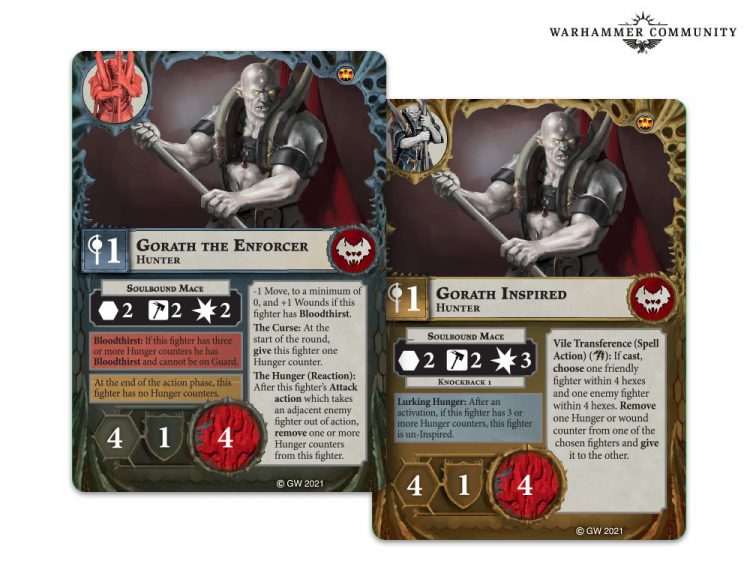 Gorath is the heavy hitter. Range 2, 2 Hammers is always a good starting point, and he gains that all important Damage 3 on inspiration. Alternatively, he can go slower and tankier by giving into Bloodthirst, meaning you can decide to post him up midfield, stack some Hunger tokens, and make him a hard to shift damage dealer. While his Vile Transference spell is potentially quite useful as a healing/utility piece, being a level 1 Wizard makes it unreliable. 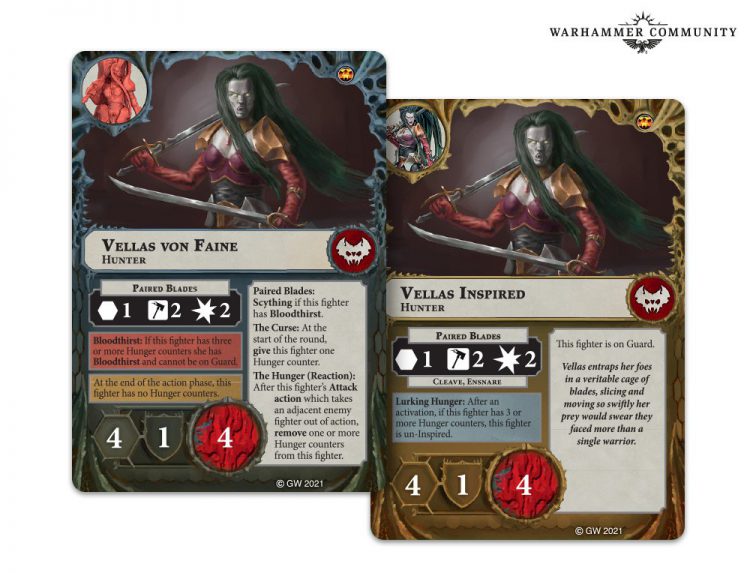 Vellas von Faine is a utility damage dealer. She’ll want to try Bloodthirsting against swarm teams to get early Scything, but will want to Inspire against tougher teams to tear through defenses. While her attack is fairly middling, it takes upgrades quite well when Inspired, so she can ramp up late game relatively well. 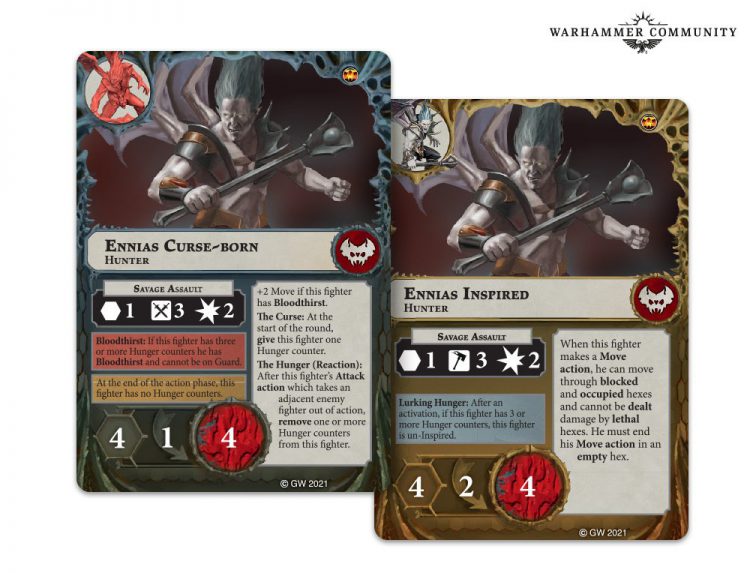 Ennias is probably the closest thing the warband has to a mook. Starting with 1 Dodge makes him the squishiest fighter early on, and his attack is merely ok much like Vellas. He either gains generic speed when Bloodthirsting, or movement utility and attack reliability when Inspired.

Blood Curse
4/5
When you have a third end phase card, you want it to be very reliable. This team can stack Hunger tokens pretty easy, or can go into aggro mode and clear squishier warbands, so this has the capability to be scored quite often.

Courtly Hunt
5/5
If you’re playing Aggro, this is one of the better cards in the faction. The team is relatively durable and has reliable damage, so you have a great chance at scoring this a lot of the time.

Crimson Hounds
4/5
This is better than I thought at first since it doesn’t even require the Attack to be successful, but a 4 model warband isn’t always getting Supports, so it situationally will be difficult to score.

Death’s Domain
3/5
These guys aren’t particularly a Hold Objective team, and your opponent can mess this up for you pretty easily. However, with clever token placement, this could potentially be 2 Glory for holding a single Objective, so it’s not terrible at all.

Gravelords
3/5
Getting two fighters Inspired isn’t hard, but it’s not terribly reliable either. The second half of this is really only good once you’ve lost a fighter or three, so it’s matchup dependent.

On the Chase
4/5
Not a terribly exciting card, but you can score this pretty easy with a few Power cards, whether playing Passively or Aggressively, so it’s fairly reliable.

Preternatural Speed
4/5
This can be hard in round 1, even with Move 4 across the board, but later on it’s pretty easy to score if you’re playing Aggro.

Recovered Poise
4/5
Getting just a single fighter Inspired is a pretty easy ask, though if you’re playing Hunger-stacking it’s obviously a much worse card.

Red Ruin
2/5
Matchup dependent, and difficult if you get it early. Not terrible for Aggro builds but pretty middling either way.

Spirited Attempt
4/5
This is extremely attractive for a control/defensive build. Gorath goes to 5 wounds when Thirsty, and they have a good amount of faction Defensive cards. I like this one a lot.

Superlative Skill
3/5
While the attack actions in this warband are fairly reliable, it’s very dice-y to score the first half of this, and the second half is quite situational. It could be pretty ok for an Aggro build, but I’m not sure it’d be my first pick.

Worthy Opponents
4/5
Again, not terribly exciting, but this is a card that you’ll find yourself scoring quite often for free. It’s a nice filler end-phase card.

Bestial Transformation
4/5
What a wild card. Basically an Upgrade that doesn’t require Glory with a solid upside. Preventing further Upgrades is a bit of a downside, but honestly with 4 solid fighters you should be able to have at least one that can carry this and chew through enemies.

Blood Vial
3/5
This has a lot of utility for defensive play and balancing Hunger, but I’m not sure it’s so powerful you pick it over other Ploys.

Dark Glamour
4/5
While level 1 Wizards aren’t reliable at casting, a 2/3 chance to turn off movement at a long range is extremely tempting, especially into some of the stronger warbands at the moment.

Dark Hunger
3/5
The only reason it’s not ranked lower is because of how important balancing Hunger is for the team. Again, level 1 Wizards aren’t great, and casting on a Focus is a 50/50, but the effect is quite good overall.

Deathly Apotheosis
5/5
Another not-Upgrade card, but the power level on this is very high, especially on a Bloodthirsty fighter. If Thirsted, you heal 1 at the end and beginning of every round, and any Hunger cards heal you. It basically makes them invincible to anything that doesn’t one shot them, and is possibly one of the best defensive cards in the game.

Driven to Hunt
4/5
Solid flexible utility. Mass Sidestep would already be great, but you can also choose to speed up Bloodthirst as well. Probably will see this in many Court decks on principle. The downside is that it’s limited to the Prince, but he’s not exactly squishy.

Quicksilver Advance
5/5
Movement utility has historically been just shy of broken. There’s a lot you can do with an out-of-sequence Move Action, and turning a Charge into a Move also can ruin enemy plans.

Mighty Strike
4/5
These guys have some pretty reliable attacks, so getting burst damage is fairly nice. However, by being a pre-action ability, it has the chance to do nothing if you miss, so upsides and downsides.

Startling Competence
5/5
A reaction (already good) that can do a bunch of different things (flexible utility), all of which are useful abilities. It’s just good.

Tenebrous Form
4/5
What a strange card. It’s good, don’t get me wrong, but it’s just… odd. Become the next best thing to invincible (as long as your opponent doesn’t have Ensnare) for the rest of the turn – it’s really good if you want to keep someone alive, maybe after charging early or late game if you need to protect a single fighter, but there will be plenty of games where it’s sitting dead in hand.

Blood Chalice
4/5
Pretty solid if you really want to be inspired or cast spells, but takes away your Bloodthirst flexibility.

Deathly Majesty
5/5
Minus dice as a defensive tool is extremely powerful, though it does little against range 2 or 3 fighters. Still, as a card to stay alive, it’s one of the better ones.

Enforcer’s Cloak
5/5
Extremely good mobility for one of your better fighters. And it’s a Reaction window that stops a lot of enemy reactions.

Glutton for Gore
3/5
Having more swing in adding/subtracting Hunger is quite nice, but it depends on the rest of your deck, and needs to combo to do basically anything.

Mirror Duelist
4/5
Excellent both offensively and defensively. If it wasn’t restricted to Vellas, it would be busted.

Ripping Claws
1/5
It’s a Great Strength, kind of, that only affects Ennias’s baseline attack, and can be interrupted by enemy Reactions. Just take other sources of +1 damage.

Undying Evil
5/5
2/3 chance to not die is historically quite good. On a warband that might play Defensive Control and has many other defensive tools, it’s very, very powerful.

Vampiric Might
3/5
Great Strength… sometimes. If you’re looking to play at least some fighters Inspired, it’s good, but then again, why not just play Great Strength?

Vampiric Speed
4/5
Great Speed isn’t particularly powerful, but this is Great Speed with an upside, and that upside can help you score all types of other cards. It’s a nice addition if your build is looking for more mobility

Von Marusi Armour
5/5
Extremely powerful defensive card, no matter which way you’re building. While it does nothing until you reach one of your two states, both effects are very powerful in their own ways.

Special thanks to Underworlds DB whose images power our plugin. All card images credited to Games Workshop.