Warhammer Underworlds: What It Is and Why It’s Awesome

Games Workshop bills Warhammer Underworlds as the ultimate competitive miniatures game. It is a dramatic departure from their mainline wargames, and stands apart from their skirmish offerings as well. With Beastgrave – the starter box that launches Season 3 – releasing tomorrow (Sept. 28th), we figured it’d be a good time to talk about Underworlds in general. If you’re curious about Beastgrave specifically, check out last week’s review.

Warhammer Underworlds released in the fall of 2017, with the Shadespire starter box. The response was overwhelmingly positive. If you consider board games as separate from tabletop miniatures games, the number of truly great skirmish games is pretty small. Shadespire provided tremendous crossover appeal by ditching rulers and complex combat charts in favor of hex-based movement and deck construction. 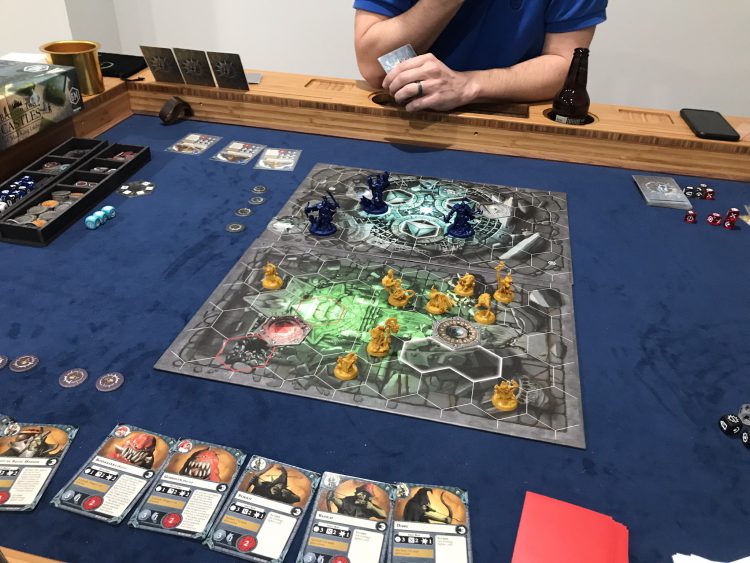 Stores struggled to keep it in stock, in part because it’s a great value. For an MSRP of $60 you got 8 brand new Citadel Miniatures in different colors, 2 boards, a mess of tokens, cards, and a cracking board game to go with it. In a recent episode of Stormcast, lead designer Dave Sanders talked about how these minis are really what made the game possible. Each of Underworlds unique warbands is molded in a unique color, and designed for glueless, push-fit assembly. They were originally designed to be used as giveaways, White Dwarf items, and other promotional items, but after seeing how amazing the fighters were, Games Workshop decided to design a game around them.

The twenty unique warbands are drawn from factions across the Mortal Realms, both new and old. Stormcast are available in various flavors (of course), but releases have introduced new fan favorites like Mollog’s Bat Squig, a Darkoath Warband, and Season 3’s new race: The Kurnothi. These warbands are truly the heart and soul of Warhammer Underworlds. In addition to coming to life on the table, the cavalcade of fighters informs your strategy even before you start building your deck or rolling dice.

In the tradition of the best asymmetric combat games, each warband carves its own identity on the table even as it carves up its opponents. Zarbag’s Gitz – a motley crew of grots and squigs – are as numerous as they are fragile. Preferring to leverage mobility and numbers to stack supportive benefits and overwhelm their enemy, they stand in stark contrast to a warband like Steelheart’s Champions. These stoic Stormcast are capable of dishing out punishing damage while absorbing a fair bit of damage themselves. 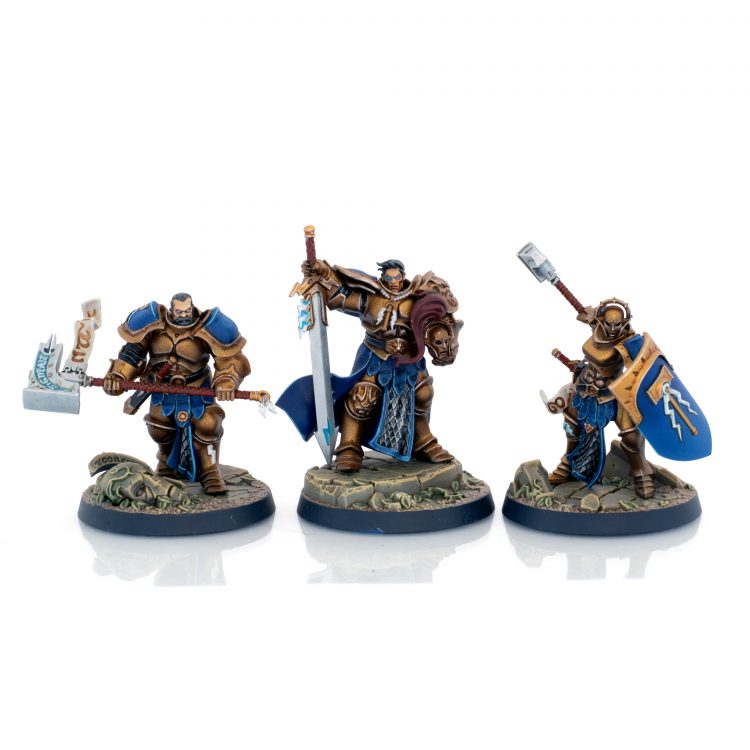 The manner in which the design team has managed to create 20 (and counting) warbands with unique identities is a testament to their design chops, and part of what has given the game its longevity. Faction asymmetry goes far beyond simple labels like Offense or Defense, and has been known to give players trouble. The Shadespire starter set released with the aforementioned Steelheart’s Champions and a band of Khorne Bloodbound known as Garrek’s Reavers. Where another game might have given the Reavers the offensive edge and the Champions the defensive one, the Champions were better at both. Early reports led to difficulties with balance, but ultimately the competitive chops of both bore out. The Reavers are still winning games, including 2019’s Gencon Grand Clash.

It helps that each new release brings with it new options. Outside of the starter box, warbands are packaged as self-contained expansions. A box is packaged with the fighters and a collection of cards to support the release. A set of faction specific Ploy, Upgrade, and Objective cards contribute additional identity to each warband while a selection of Universal cards ensure there’s something for everyone. New cards tend to shake up the competitive meta quite a bit; most veterans recall the day we discovered Escalation, and few decks have been made without Ready for Action since the day that came out. 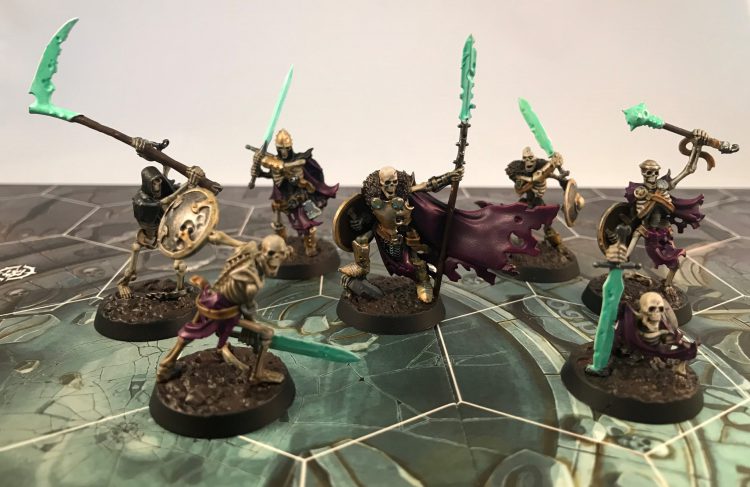 Of course, we’re getting ready to lose some of our old favorites (and not-so-favorites). I’m personally glad to see cards like Escalation go away with the rotation implemented with Season 3. All Shadespire Universal cards have been made invalid for organized play. This makes it easier to get into the game as a new player, and helps clear some of the older misteps. To put it bluntly, early cards are plagued with language inconsistencies, rules quirks, and some un-fun mechanisms. Escalation awards a player 2 glory as long as 3 upgrades have been played across both warbands. This is both easy to score and completely non-interactive; both players are simply rewarded for doing what they want to do anyway, making it one of the easiest 2-glory cards to score in the game.

To be sure I’ll miss cards like Trap, but the designers have included some replacements that serve a similar function in slightly different ways in Beastgrave and I expect to see more. Underworlds continues to surprise and delight, and I’m looking forward to the future. Let’s get a little deeper into the nuts and bolts now, shall we?

How Does it Work?

I’ve alluded previously to various types of cards and at this point I’d like to get more specific about how it all works. Warhammer Underworlds is played in an arena made up of 2 hex-grid boards chosen from each player’s collections. The board chosen is a key element of strategy and Games Workshop has made a number available. Players field a warband made up of models that move around the board, claiming Objective Tokens placed by the players and eliminating each other in violent dice-fueled combat. At the end of 3 Rounds, the player with the most Glory wins regardless of how many fighters they have – or don’t have – remaining.

In addition to the 3-9 fighters that make up the warband, each player is responsible for constructing two decks of cards. The first is the Power Deck and is made up of at least 20 cards evenly split between Gambits (Ploys and Spells) and Upgrades. Generally, Power cards are played in-between model activations. While Season 2 introduced a few exceptions, for the most part Gambits are one-shot instant powers that shape and change the environment. One might push fighters around, changing the tactical positioning, while others boost combat, debuff opponents, and myriad other effects. Destroying objective tokens is one of my favorites. There’s nothing quite like denying your opponent the ability to score Objective Cards via the same effect that adds one to your pile. All of these cards are made more satisfying because most of the things you do in this game will be rewarded by a well built Objective Deck.

This deck is made up of 12 Objectives. Like the Power Deck, these can be chosen from the pool of Universal cards and/or from each warband’s Faction-specific options. They work like in-game achievements; perform certain actions and they’ll provide anywhere from 1 to a whopping 8 glory depending on how challenging they are to score. 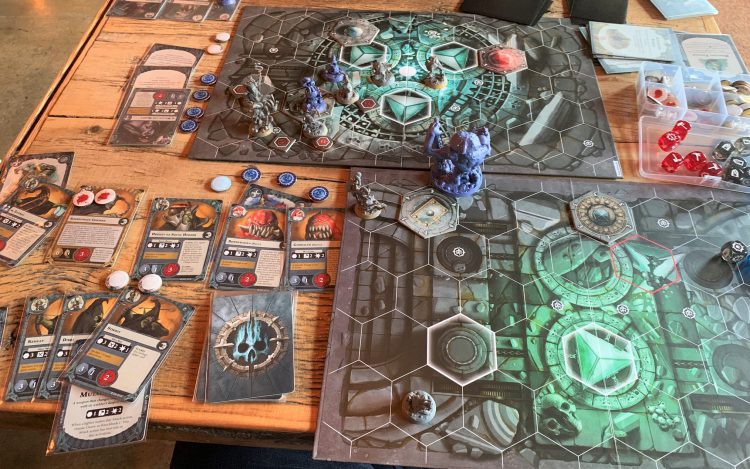 Each of the 3 rounds affords a player 4 opportunities to take an action. The most common are Move and Attack actions; it is a combat arena, after all. Charge is a super-action that combines moving and attacking, though comes with the fierce downside of restricting that model from activating again that round. Guard, a defense boosting action, gets a significant bump in usefulness in Season 3 now that it also prevents an attack from pushing you out of your space.

And that’s the game. 12 total activations each, plus any bonus movement, attacks, boons, and curses doled out by your Power Deck, determine who wins glory and who dies in ignominy to await resurrection through the Katophrane Curse. Of course, I wouldn’t be writing almost a couple thousand words on Underworlds after 2 years of covering every release if it wasn’t absolutely awesome so let’s get into that.

You know that feeling when time compresses or expands when you’re enjoying something? Underworlds feels like that every single time. 12 actions is nothing, especially when you’re playing a warband with 5-9 figures. I’ve played hundreds of games and I still look down at the beginning of every game wondering how in the hell I’m supposed to accomplish anything with 12 activations; then at the end I look down again in awe of just how much happened in the battle.

Fighters move, charge, and dance around each other. The rattle of dice herald conflict and combat, with few fighters surviving until the end of the game. By the time you’re done with your 12 turns you’ll marvel at the pile of glory and corpses you’ve amassed. In fact, it’s a bit of a miscategorization to call them turns. The action is so constant in a game of Underworlds that it never feels like you’re not doing anything. 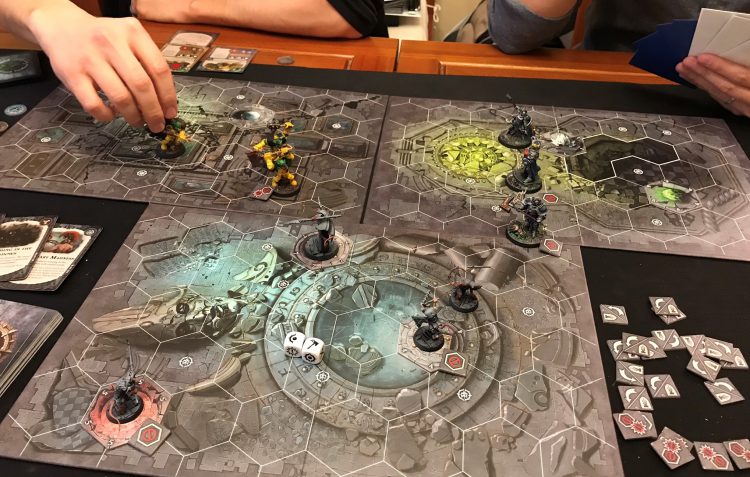 This is due to that beautiful Power deck that pulls so much weight. On a mechanical level, it provides a few handfuls of instant abilities, rule bending effects, and lasting upgrades; on an emotional level it keeps you engaged throughout the game. In between each action there is a Power Step where players alternate playing these little love-letters of death. Each one changes the game state in little ways. You’re engaged the entire time; if your 12 actions are the heavy swings of an Orruk’s axe, then these cards are the snicker-snack of Skaven daggers ensuring there’s never any peace.

The cards work in concert with a faction’s unique abilities to provide you with something new to explore with every game. While the Ironjaws or Mollog may be the more straightforward of the available factions, almost every warband can be played differently depending on how you build that deck. Skritch’s crew of skaven can be empowered to run around grabbing objectives and cutting enemies down through a number of light attacks. Or, Skritch can throw them to the wolves and horde upgrades and power for himself. In this way the devious rat becomes the most powerful combatant in the game. It’s hard to win when you’re dangling on the end of a rat’s spear. 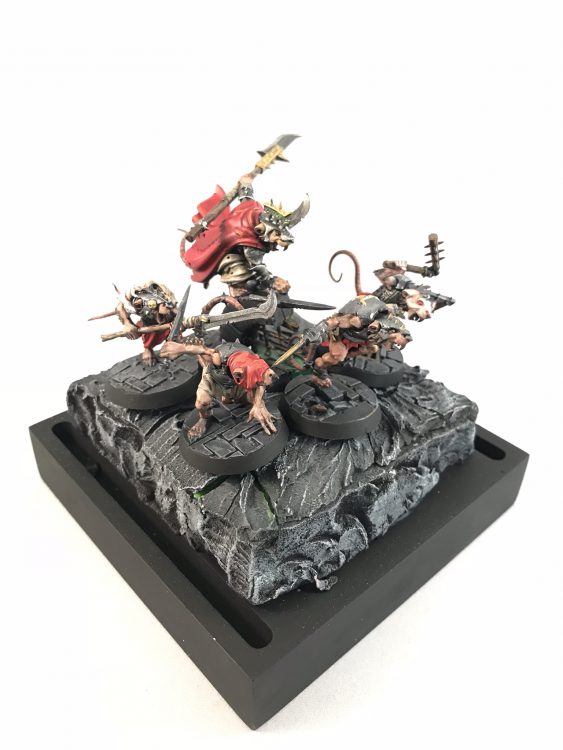 In short, Underworlds is a game you can keep coming back to. New cards breathe life into old favorites while new warbands are an opportunity to try an entirely new playstyle. With near 1,000 cards (at the end of Season 3) to choose from you can fine tune a champion winning deck for ages with each game an enjoyable experience in its own right. Some players find the low number of die rolls to be an issue and yes, there will be games where a streak of bad luck stymies your attempts. These games are rare, and with a battle lasting only 30-45 minutes, there’s always time to reset and play again before game night is over.

By all accounts, Warhammer Underworlds has been a smash hit for Games Workshop and we can expect support for at least a few more years. The elimination of Season 1 cards and the release of Beastgrave provides new players a gentle on-ramp to the system. Those of us who have been battling for years are looking forward to a potentially dramatic shift in deck construction, and of course a few more warbands to build and paint up. This game is killer, and there’s no better time to pick up your dice and join the fight.