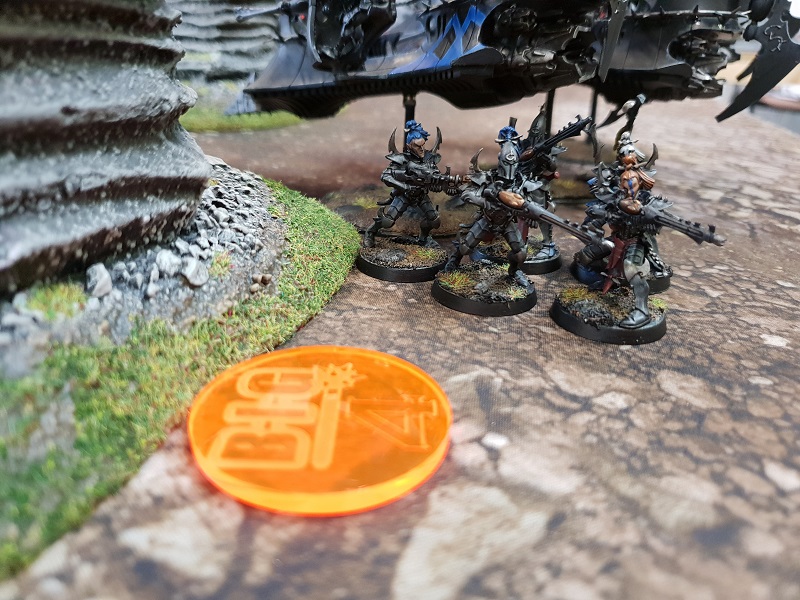 After posting my report on playing at Battlefield Birmingham recently, one of the pieces of feedback I received was that it would have been helpful to explain how the missions worked and how that would affect strategy. These combined Eternal War/Maelstrom missions are a common format in the UK, especially since it’s used at the ETC, but as I understand it they’re not played so much in the US. Since I missed the opportunity to talk about it in the battle report posts, I’m going to do so now instead.

How does it work?

To a certain extent the Ronseal Rule applies – it does what it says on the tin. In this kind of mission, both an Eternal War and Maelstrom scenario will be in play at the same time. This means that there’s two opportunities to score points, for fulfilling different objectives, partially from the Eternal War scenario, and partially from Maelstrom cards. Unlike some formats with separate primary and secondary missions, these all count towards the same overall score, and players win or lose based on this. In most, but not all, formats, the “standard” secondary objectives of Slay the Warlord and Linebreaker are also in play, but First Blood is removed.

Astute readers will notice an immediate problem here – the two different mission types don’t always use the same number or placement of objectives. All Maelstrom missions use 6 objectives, since you can randomly draw “Secure Objective X” for any number from 1-6, whereas some – indeed most – Eternal War missions use fewer than that, anywhere down to 2. Additionally, some missions involve destroying objectives or them being removed at some point in the game. Exactly how this works depends on the event and the missions being used.

It’s easiest to demonstrate how the missions work with a couple of examples. Both of these are taken from the Peaceful Negotiations rulespack, an event which I ran in August this year which used this system.

Firstly let’s look at game 2, which combined Dominate & Destroy with Race to Victory. This is a fairly easy mission to put together using this format. Both missions use 6 objectives, so they can be placed in the same manner for both. The only modification needed is to change the Race to Victory text slightly – instead of the game immediately ending when one player draws 10 cards, just the Maelstrom scoring ends, with the Eternal War scoring continuing as normal. What this means is that players can score 1 VP/turn for each objective they hold, 1 kill point for each unit they destroy, and then whatever cards they draw from Maelstrom. Additionally, if one player manages to score 10 cards, then the Maelstrom scoring stops, and they score the extra points for being the first to 10. This is potentially a very high scoring format – in the game I played, I scored over 50 VPs by game end.

The opposite example might be game 4, where we played Front-line Warfare with Sealed Orders. Front-line Warfare is an end-game scoring mission, with specific rules for placement of objectives. Sealed Orders is the Maelstrom mission where players draw 6 cards and conceal them their opponent. They can only draw more cards when they’ve cleared their hand. You can see straight away that this has two effects – firstly, that the scoring is likely to be much lower, since there’s far fewer VPs available each turn unless you get very good Maelstrom hands. This was borne out both by my own result – I won 18-3, compared to 52-19 in game 2 – and also by the averages, with players scoring an average 15.3 points for the round compared to 27.7 in the round 2 mission.

The second effect is that a bit more thought has to go into placement of objectives. In the case of Peaceful Negotiations this year, we handled this by having players deploy objectives 1-4 first, as dictated by the Front-line Warfare mission (one in each deployment zone, one outside of each deployment zone) and then deploying the additional two Maelstrom objectives separately. Importantly, objectives 5 and 6 don’t count for end-game scoring – a distinction which won me a game at LGT, which also used this combined format.

That’s how it works, but what it translates into depends on the format. As mentioned, traditionally this isn’t used in the primary/secondary style that many US events run with, where scoring in the different aspects is separated out. Instead you get a combined final score. What this means differs depending where you’re playing – often it’s a 20-0 system, where players score up to 20 points depending on the difference between their VP total and their opponent’s – so a difference of 1pt would be a 10-10 draw, 2pts would be an 11-9 win, etc. until one player has scored 10pts more than the other resulting in a 20-0 win. At my events, I use straight win/draw/loss instead, with VP difference being a tiebreaker – what you might call football scoring.

The above is a fairly simple approach, but out in the wild I’ve seen other rules used too. A very common one is that Maelstrom cards worth D3 points always count as 2, or 4 for a D6. Battlefield Birmingham includes the rule that no more than two Maelstrom cards can be scored per person per player turn – which means that if someone gets a great hand on turn 1, they have to plan it out and prioritise rather than getting a huge slug of points immediately. At the LGT, Front-line Warfare was modified to be progressive scoring instead of end-game, which meant that some huge scores were achieved since it was combined with Kill Confirmed – with both kill points and progressive scoring of a potential 9pts a turn for a player controlling all the Eternal War objectives, scores racked up fast. In an event which used a 20-0 system with overall VP differential being a tiebreaker, this was a good way to separate the pack in the final game. At the ETC, which also uses a 20-0 system, they add the additional wrinkle of adjusting the score by the kill point difference, even in missions which don’t use kill points for actual scoring.

So how does this translate as a player? What changes does it make to your strategy?

To me, what these missions chiefly represent is balance – not in the ephemeral sense of “the game is balanced,” but between the certainty of Eternal War and the chaos of Maelstrom. There’s a certain number of points available on the table which you can be certain of scoring – if you take this objective, it’s worth a definite number of points, whether on a progressive or end-game basis. You can’t rely on that though, because there’s also the X factor of Maelstrom. Equally, chasing Maelstrom objectives all over the table may not be worth as much as just holding tight and waiting it out. It introduces a measure of unpredictability, and asymmetric objectives (which I really like, to force players to adapt to stopping their opponent achieving their points as much as achieving their own), without being so subject to chance that a player can win purely by the Maelstrom hand they draw.

As a player, you need to be prepared for this. Multiple missions, particularly if drawn from Chapter Approved, give more points for being able to take objectives in your opponent’s half of the table. Maelstrom is unpredictable and can require you to quickly shift between different positions, but equally you might find that you’re giving up Eternal War points by doing so. Often (but not always – for example at LGT this year) you can win by tabling, so it’s not impossible to just play a ball-busting gunline, but it’s probably not optimal. That means the most successful armies are the ones which are built around being fast, responsive and hard-hitting – able to shift position as needed, unload a lot of firepower, and reach out and take objectives across the length and breadth of the board. These kinds of armies are common in 8th edition – the Blood Angels/Imperial Guard/Imperial Knights meta-list is very good at it, and Eldar of all kinds have the exact mix of desirable traits to be very strong in this format.

“Play the mission” remains ever-relevant. It’s highly important to make sure that you know which objectives matter for which game type – I’ve wrong-footed at least one person who was camping objective 5 in a mission where only 1-4 counted for Eternal War, for example. My friend won a game at LGT despite getting tabled, because what mattered was the points on the board at the “natural” end of the game, and he was so far ahead by playing objectives that even with a clear table to play on his opponent couldn’t catch up. Equally relevant is stopping your opponent playing their objectives in a format where you have so many additional points available from Maelstrom. Defend Objective X cards are worth a lot of points, so preventing your opponent from getting them can make a big difference.

Aside from playing in a tournament using these missions, you might want to run one yourself, or just try out playing them in a casual setting as a change from your normal format. Personally I really rate them and would encourage people to try it out. In an organised setting, think about the following when you’re choosing what missions go together:

Hopefully that’s a helpful guide to this interesting format – if you’re still not sure, try it out!