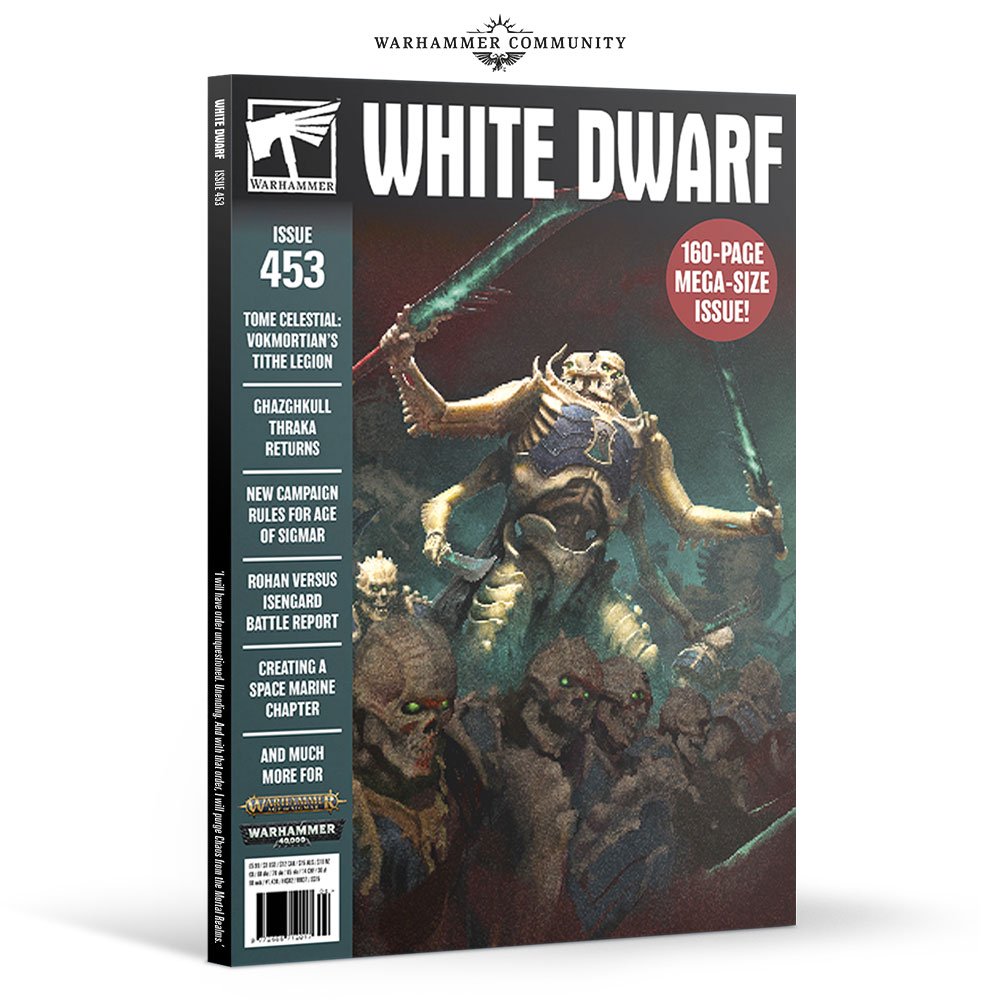 The new White Dwarf is out for May 2020 and while it may be difficult to get in stores in some parts of the country, subscriptions and digital downloads are available – go pick it up! There’s lots of good stuff in there. Included in that good stuff is a supplement for Ossiarch Bonereapers containing a history of their lore, a painting guide and 3 new battalions. The lore is more or less a recap of what’s already in the battletome, though it gives some new emphasis on Vokmortian, the named character from the Feast of Bones box. The painting guide helps you paint the Praetis Mortarian legion, which is Games Workshop’s “Default” legion they like to slap on the front of all the boxes, which could be handy if you’re going for that look.

The Battalions are wholly new and that’s what we really want to take a look at. The battalions have a theme going on, they’re focused on Vokmortian and his legion. Vokmortian didn’t get a ton of attention early on because he was sequestered as an exclusive to the Feast of Bones box, but now he’s being sold as a standalone model. So what battalions does the magazine give us?

Seal of Demise: Choose an enemy Hero and roll a die, on a 2+ subtract 1 to hit for that Hero when targeting Vokmortian

Eternal Duty:  At the beginning of your Hero phase, pick one unit from this battalion within 8″ of Vokmortian. Return 1 slain model.

This isn’t too bad. The units required are solid, though the Morghast are iffy. At least you only need one unit of them. Seal of Demise is too situational to be useful, you want to avoid Vokmortian getting into combat as he’s more of a wizard, though it might give some extra protection in the likely event you don’t get Contract of Nagash to go off. Eternal Duty is quite good, though you need to keep the unit within 8″ of Vokmortian, and its a bit wasted on the Mortek Guard, you want to restore a Stalker or Morghast instead.

Hunters and Hounds: Add 1 to wound rolls for Gothizzar Harvesters within the Battalion if the target is within 12″ of a Deathrider unit from the battalion.

I quite like this one. These are all units you’d bring anyway and the buff is solid. Harvesters are already popular, and Bonereapers struggle to get bonuses to wound rolls so this fills a missing void.

Unstoppable Reapers: Gain D3 relentless Discipline points if your General is on the battlefield

Bound Nordyrie Warriors: Any number of Nighthaunt allies can be taken for an army including this warscrolls battalion.

As usual, “Super Battalions” are tough to review because they’re wildly impractical. Look at all those battalions you need! I doubt this has ever or will ever be used at any point. If you could, extra Relentless Discipline points is appreciated and you could possibly do some fun stuff with nighthaunt allies, especially since Bonereapers don’t have any allies normally. But you already spent a metric ton of points to get here how much room could you possibly have left?

These are… OK I guess? Look I have a couple of problems that I’ve avoided talking about for the sake of being objective but I see two big issues here to keep them from being used in any real competitive scene:

Vokmortian just isn’t a great character. Many players have him because he was exclusive to the Feast of Bones box, which was an entry point for a brand new army that looked gorgeous, but he just isn’t great himself. His abilities and unique spell ask him to get too close to the battle, which he’s ill-equipped for. He can cast two spells but his warscroll spell sucks and almost every other character in the book is a Wizard, and he just can’t compete with them.

All of the warscrolls included have to use the Mortis Praetorians legion which as most players of Ossiarch Bonereapers know (and those who’ve fought them) that it has to compete with Petrifix Elite which it simply is not equipped to do. It’s a mediocre legion that doesnt even get a fun gimmick like say, Crematorians and their self-immolating skeletons. If you happen to be one of the few who uses the legion though, Harvester Scythe-Corps is probably a viable warscroll to use, since you’re probably bringing many of those units anyway.

This entire article is…strange to me. This seems like the type of article you could do about a more established character that fans have a lot of love for. I don’t dislike the idea of battalions focused around one character’s legions. I actually think you could do something cool with it, were this about a different character rather than one people got included amongst some other stuff they bought and then promptly forgot about. If you happen to have read the fluff in the Feast of Bones box (I did) and thought Vokmortian was the coolest (I did not) then there’s probably appeal here, to play a legion that matches his fluff. Otherwise, hard pass.