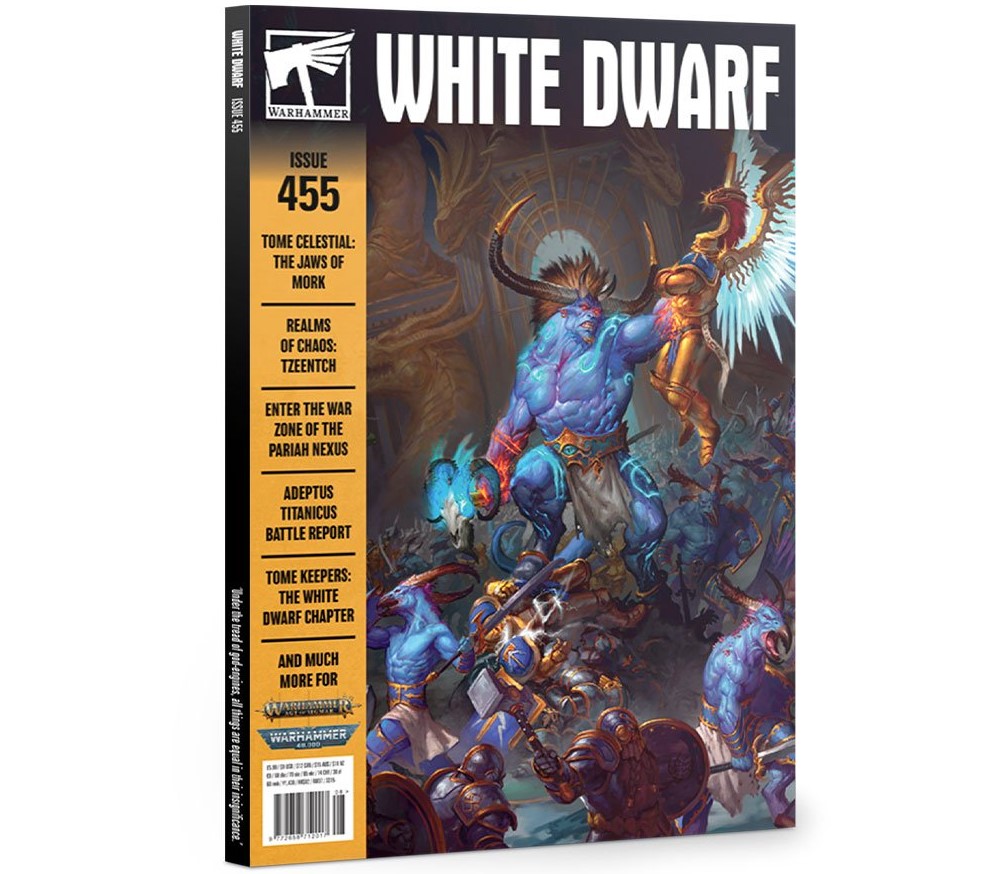 This week we have a bit of a treat for Gloomspite Gitz players in the August issue of White Dwarf. An actual subfaction was introduced for this oft-neglected army: The Jaws of Mork. This faction is aimed at people who really loves squigs. Do you like squigs? I sure do, so if that sounds like a good time then keep reading for possibly your best opportunity for a squig focused list.

Surprisingly for such a straight forward faction, there’s a fair amount of lore. The “Squigalanche” is more of a loose coalition of squig riding towards more or less the same goal. Few know why Squigs do this. Is it random chance? Is it the will of Mork that drives them? Who knows? All that matters is if you see them on the horizon you’re already dead, because there’s no way you’re getting out of the way in time.

We do get a little more insight into the history of the Jaws of Mork. Inhabiting the Yskian Veldt in the realm of Ghyran, supposedly the Jaws of Mork originated with the loonboss Norg Nasty-necka attempted to jump so high with his squig mount he could…do something. It’s not entirely clear, some think he wanted to stab the bad moon in the back when it wasn’t looking. Regardless, he jumped off the highest point in the veldt and was never seen again. He attracted a lot of followers who found this very funny. Now there are those attempting to jump as high as possible on their stampede of squig mounts. The current leader of the Jaws of Mork, a mysterious armored grot known as the Overbounder seeks to be able to jump so high he can clear the bad moon itself.

Now why he would want to do this is equally unclear, but the point is he wants to do it. His followers similarly enjoy bouncing on their mounts and will follow their insane boss to the moon if need be. Wherever the Jaws of Mork travel, death and destruction will follow

First, let’s look at the update to the Loonshrine Warscroll. By default the Loonshrine warscroll has the ability “Moonclan Lairs”, which lets you bring back Stabbas and Shootas that were killed at half strength if you roll a 4+. Now if you have a general with the SQUIG keyword you can now choose to replace it with the rule “Swarm of Lair Lurkers” after setup instead. This ability is functionally the same as Moonclan Lairs except it applies to SQUIG HERD, SQUIG HOPPERS or BOINGROT BOUNDERZ. So instead of Stabbas and Shootas you get to bring back squigs. The important part of this rule is that, unlike the other rules in the article, it doesn’t require you only use Jaws of Mork. It’s certainly aimed at people who want to play Jaws of Mork or at the very least a squig heavy list. In most cases you probably would want to be able to bring back Stabbas and Shootas but it never hurts to have options.

The star of the article, the Jaws of Mork. Up until now, Gloomspite Gitz were one of the few 2.0 books to not get any subfactions so this is actually their first one. If it wasn’t clear by now, this is for people who want to use lots of Squigs, a fairly popular choice for many Gloomspite players. Most of the abilities serve to benefit squig heavy lists in some way and the options here aren’t bad. Like most every book to date, subfactions grant you a new allegiance ability and command ability at the cost of a new relic and general trait you’re required to take.

You can reroll the roll used to determine a SQUIG unit’s movement speed. One of the “fun” mechanics of running Squig units is the 3D6″ movement, which fluctuates on bigger squigs as they lose wounds. This gives you an out if you just make a bad roll. As per the rules, when rerolling a roll you do have to reroll them all so if you got two 6s and a 1, just keep it.

Command Ability: ‘Get Some Loonshine on ’em!’

At the start of any phase you can use the top damage bracket of a Jaws of Mork unit. This is most important on mangler squigs, which have a weird bellcurve shaped damage profile where they start strong, get weaker in the middle and then hit full strength again just before death. This ability is for them, if you find your Mangler Squig or Loonboss riding on one is in that ugly “Sweet spot” then hit them with this to bring them back to full power for the phase.

Command Trait: Envoy of the Overbounder

Reroll battleshock tests for units within 12″ of the General. This is one of the few cases where this is really important. Gitz have absolutely terrible bravery stats. Most of your multi-model units have a bravery of 4, meaning even a minimum sized unit can be at a decent risk of wiping when they flee. This at least gives you another shot at success if you got close.

At the start of the combat phase, pick a Hero unit within 3″ of the bearer. Until your next hero phase, add 1 to hit rolls against that hero. Loonbosses on Mangler Squigs hit pretty hard so this isn’t a bad tool to give them to lay it on a little thicker.

Two new battalions, a regular one and a “Super” battalion. Both of these are locked behind the Jaws of Mork faction as they require the units to have the appropriate allegiance.

In short it adds 1 to the damage of the Damage characteristic of Squig attacks (but not their riders). It’s pretty clear the utility of this, pack up some large squads of these boys and let them go to down, they’ll be more effective than usual. At 140 points its a touch expensive but worth it if you can maximize its utility.

At the beginning of setup, every unit within the battalion can move 6″. For a Super Battalion this is actually pretty attainable. It’s a grab bag of different Squig units and there’s enough optional units to skip that you can really make something of this. At only 90 points after paying for the units you probably were taking anyway, you could very easily build a list around this. In fact, let’s do that!

The Moon-biter Squigalance takes a lot of the guess work from this process, you can pretty easily include it without much problem and it contains mostly everything you’d want anyway.

Not optimum but very fluffy, we bring Loonbosses on two kinds of Squigs, 2 Squigherds and Squighoppers and some Boingrot Bounderz and Mangler Squigs to round out the list. Skragrott is there to bring some magical support and hey, he has squigs holding his cape so I’d say he deserves to be in the Squig appreciation club. This list is pretty straight forward, you move fast and kamikaze into your opponent. Thanks to the Moon-Biter Squigalanche you’ll get an early lead on your opponent with a 6″ movement, and each turn get to reroll your movement if things go sour.

Squig herds are one of the few units beneficial to take in large groups in Gloomspite Gitz because when they flee they have a chance to do mortals. If a units wiped out, just bring it back with the shrine.

Not much, honestly. Assuming they remain valid, which Games Workshop has been pretty dicey over in the past few months, there isn’t quite enough here to work with. Without mincing words, Gloomspite Gitz have one the worst win records in the competitive circuit, sometimes even being beat out by Grand Alliance lists. The reasons for this are many but to sum it up in a few short words, they have subpar stats that heavily impact their survivability (especially their atrocious bravery) and don’t quite get to field the numbers to overcome this.

To add insult to injury their mechanics are of the “fun” variety. Lots of random rolls that can backfire horribly on you at the worst time and the fact that one of the abilities of this faction is to mitigate that random factor demonstrates how crippling it can be. If you’re not really a competitive player and think this is fine and fun, that’s great! For those that want to play competitively, nothing short of a total book rewrite could probably save the gitz.

Regardless it’s still nice for them to see some sort of subfaction when they previously didn’t get one and it couldn’t hurt to give them a few more for good measure. They really need the help.

What are your thoughts? Do you think the Jaws of Mork might be stronger than they seem? Are you a Gitz player excited to run the Squigalanche? Let us know at contact@goonhammer.com or on social media!