Between the Core Rules and Beyond the Veil, there are plenty of missions for your Crusade campaign to play through. But what if you wanted something different? The Argovon Campaign is the first of Games Workshop’s new Flashpoints, which are campaign rules designed to help you set your battles in a particular battle somewhere in the Warhammer 40,000 galaxy. This month’s White Dwarf brings us the second part of the Argovon campaign – if you missed our review of last month’s rules, you can find those here.

You can find these rules in White Dwarf, Issue 458.

In the second month, the stakes are higher, with a pair of bespoke missions and an entirely new mechanic somewhat akin to Beyond the Veil’s Investigation Points, but with a bit of a twist.

On top of the War Zone points and XP you’ll be picking up in last month’s battles, your army will also gain Xenotech points as you play. The most effective ways to do this are to win battles, kill the enemy Warlord in melee, and take the new Search for Xenotech Agenda, which has a unit perform an action to search a terrain feature and come up with a Xenotech point if they can survive through your next Command phase. You’ll still pick up a point or two even if you lose or draw, but, as usual, to the victors go (most of) the spoils.

These points can be spent on new stratagems that cost 1CP and 1 Xenotech point each, and offer some interesting effects that might be worthwhile. The Field Projector stratagem gives one unit from your army Light Cover in the open during your opponent’s Shooting phase, while the more exotic Matter Transmogrifier lets you pick a unit within 6” of one of yours, then roll 6d6 and deal a mortal wound for each 4+. They’re all useful and give you potent bonuses, but are limited by your ability to gather Xenotech points over the course of the campaign, since you’ll have to spend your hard-won campaign-scale resources to use them.

And you might not even want to spend those points, since they’re going to impact phase 3. However, as of time of writing, we have no idea what that impact will be. Will having mastery of these artifacts help your alliance carry the day? Or will those who’ve hoarded the treasures of Argovon be punished for their hubris? We won’t know until the next issue.

In addition, there are two brand new missions that can be played, one each at the Incursion and Strike Force level. Each comes with its own set of unique rules, objectives, stratagems, and a bespoke agenda, making them unique experiences that really give you something different. Death on Hishrea, the Incursion-level mission, sees the attacker leveraging the unique fauna of the Hishrea region to their benefit, replacing the objective markers with “Frostwyrm tokens,” which represent indiginous beasts that jump out of the tundra, steal their opponent’s shit, and eat a handful of troops to boot. Fortunately for the Defender, the frostwyrms don’t really care who they eat, and will scarf down just about anything nearby before they scuttle away back under the permafrost.

The other mission, the Apocalypse of Foronika, shows a battle over a sizeable deposit of blackstone, as well as the facilities necessary to extract and refine the stuff. However, rather than fighting over objectives, you fight over “key locations,” which are terrain features that are treated as objective markers for scoring purposes. Unfortunately, it’s dangerous to fight in an industrial zone, and each of your units within range of one of the key locations has a 1-in-6 chance to take a handful of mortal wounds. And they’re not called “key” locations for nothing – you score by holding them, but if you can manage to finish the battle in control of all four of them, you’ll score a whole pile of victory points and then get absolutely showered in campaign-level rewards, including extra war zone points, Xenotech points, and a cool 3RP.

While neither of these missions are likely to be a life-changing experience, they each have some potential for some cool moments. Unfortunately, they’re not really the stars of the show here, being significantly less interesting than the tricks the Xenotech points offer, not to mention that we currently don’t even know how the Xenotech will ultimately impact your campaign.

What’s particularly interesting about these missions is that they’re the first 9th edition missions to have custom stratagems associated with them – this was something we saw often in Narrative Play missions in 8th edition but has been missing in 9th. Here each mission has two stratagems players can use, and they’re strong enough that they’re likely to see use, particularly for melee-focused armies. 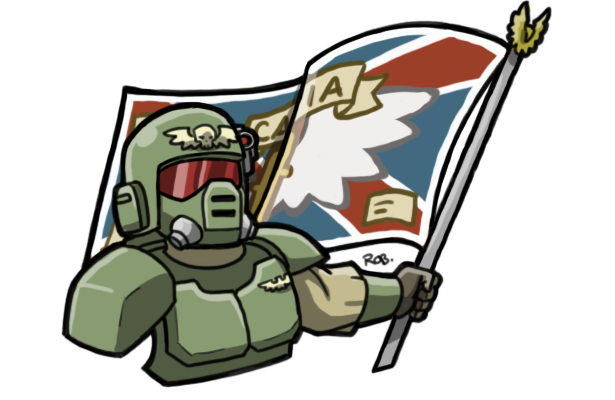 TheChirurgeon: Overall these rules build on the Round 1 rules in an interesting fashion, adding a bit more meat and intrigue that was missing before – we’ve already had a few dozen battlezones thrown at us in 40k over the last few years and with a few notable exceptions, most have been pretty bad, generally falling into a pattern of having random rolls dish out mortal wounds to your army. Phase 2 ups the ante with some interesting developments as they relate to Xenotech. These rules are considerably more interesting, as they’re more in the vein of what Beyond the Veil was doing. Xenotech points add an interesting twist, though it’s a bit of a miss that they aren’t integrated with phase 1 – Agendas like Scavenge or Forbidden Xenotech seem like they could have helped set this mechanic up even earlier.

There’s also no mandate for the new missions to use the Hishrea battlezone/weather rules, which feels like a missed opportunity. I realize someone might not have both issues but a simple “hey if you’ve got these, use them” would have worked great here.

Condit: I also wish they’d played more with the possible tension between Xenotech points and War Zone points. In phase 1, they introduced the slightest bit of tension with the new agendas by offering you extra War Zone points at the expense of less XP-efficient agendas. These new rules offered a golden opportunity to create another layer of tension, forcing players to balance developing their Crusade Rosters, winning victory points for their alliance, and banking Xenotech points in case they do something cool in the future.

TheChirurgeon: I do really like the hints at another use for Xenotech points in phase 3, but without knowing what that looks like it’s really easy to just treat them like elixirs in an RPG. The Xenotech stratagems aren’t particularly compelling. Like I might use the Signal Disruptor but that’s it.

Condit: I think the one thing they did unambiguously right with the Xenotech rules was tying one point each game to killing your opponent’s Warlord in melee – with the agendas in phase 1 rewarding you for playing more aggressively with your Warlord, turning around and giving the other side a bonus for punishing you when you inevitably overextend is a neat twist.

TheChirurgeon: Yeah that’s a cool twist on these and it does highlight where they go together well. Overall I think these have been pretty solid as free rules and if you’d been playing along with a friend over the last two months there’s easily enough here to tide you over another month.

Condit: They’re not going to scale up to a more in-depth campaign, though. Not that that’s necessarily a bad thing right now, and the fact that these rules are fairly low impact and straightforward to add to your games makes narrative gaming accessible even to groups that would usually rely on larger events to help the try this sort of thing. These may not seem like much on their own for people who’ve been at this for a while, but I do think they’re a great tool to build around, especially if you or your group are newer to narrative play.

TheChirurgeon: At the very least they’ll add variety to your ongoing Crusade with friends, which I feel like is the most common way these games happen.