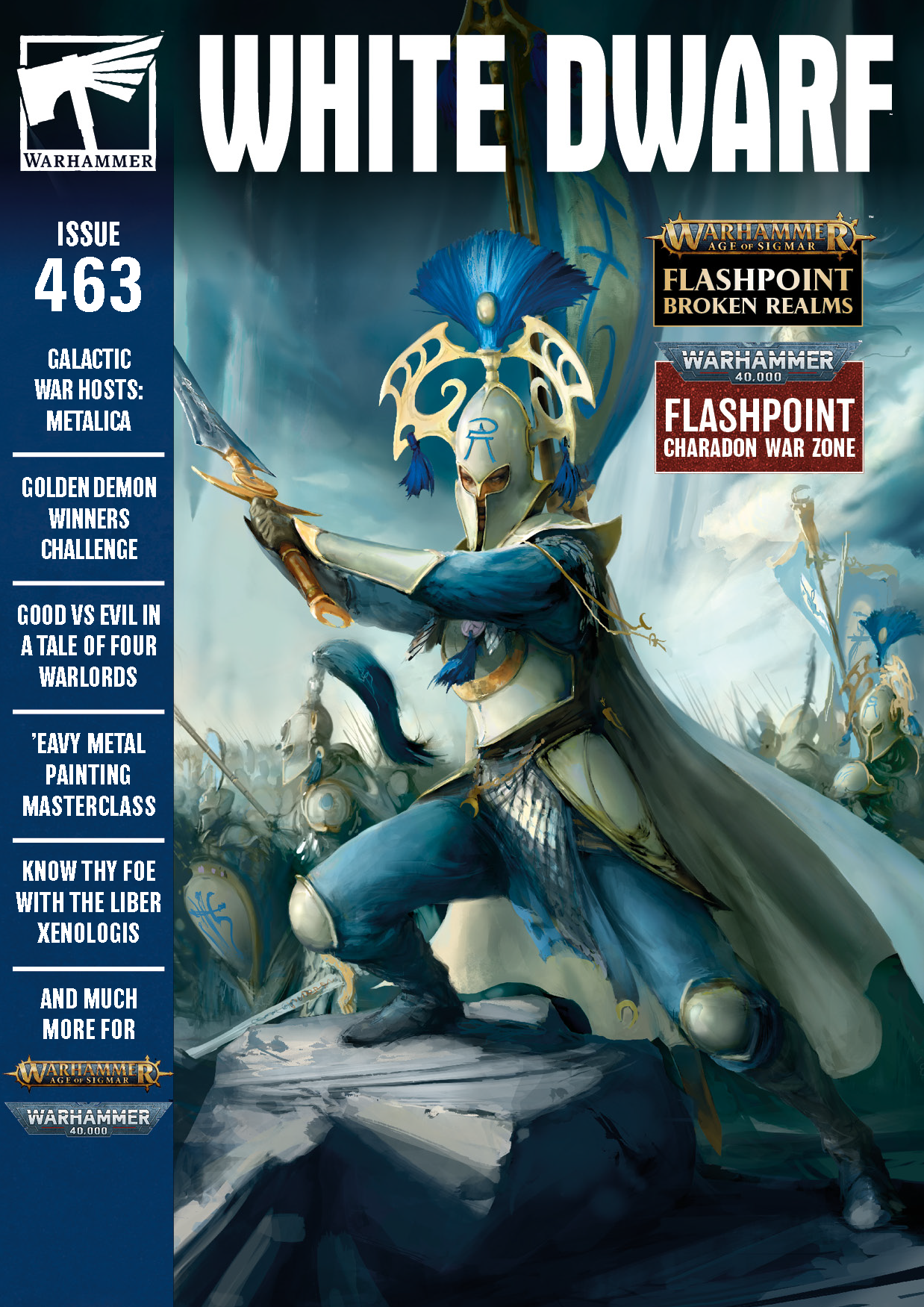 In the Narrative Forge, we talk about playing games with more of a storytelling focus in mind. From bespoke missions to Crusade armies to sweeping campaigns, we cover the ways to add flavor to games. This week we’re reviewing the Narrative content in White Dwarf 463, which gives us another instalment of Crusade content for the Charadon campaign.

We’re now six? Flashpoints in with GW White Dwarf dropping our fourth set of Flashpoints for Charadon; we previously reviewed parts One, Two, and Three so if you’re following the campaign and want to know how those shook out, click on the links supplied.

Welcome to another 40k White Dwarf Flashpoints, where we’re treated to yet another set of theatres of war that introduce 1-2 too many elements to a given battle. We’ve gotten 2-4 new theatres in every Flashpoint now and they tend to be a mixed bag.

This month introduces the Tri-Forge Theatres of War, set within a trio of forge worlds called the Tri-Forge Cluster in the Charadon Sector. This sector has a particular importance to the followers of Nurgle, for whom the number 3 is sacred as it represents a triple tri-lobe – three systems, each with three planets. In order to claim the sector, they’d need to defeat both Imperial forces and the Thousand Sons that were previously sieging the area. Note that for the Thousand Sons, 9 is a sacred number, and this particular sector has nine planets, so it’s time for a SACRED NUMBER WAR.

The first of three theatres, the mirror plains have been twisted by the power of the warp and is constantly beset by optical and spatial effects. The designers recommend a mostly flat battlefield here with the ruins of the Imperial civilization that used to mark the planet. So feel free to drop your standard ruins on this one to make it playable. There are a whopping five special rules that apply to this theatre, making it one of the most needlessly complex theatres of war yet. Let’s dig in:

Rob: There’s way too much going on here. Some neat ideas but I feel like every time I’ve written for these I’ve asked them to tone it down by half.

Beanith: This one I really want to like but good grief it’s the closest we’ve gotten to Calvin Ball yet. The Flickering Reality table could very easily stand alone by itself and could make for a fun extra rule for a game. As for the rest of the theater, I’m a big fan of being able to wander across the board and pop the other Null Node.

Rob: Yeah I do like that interaction but I feel like the table probably needed a third null node midtable to fight over/destroy before your opponent could get there.

Welcome to the Thrios Extraction Plants, which should include lots of industrial structures and pipelines. This theatre is notable for at least having a very cool condition, which is that your objective markers, which are extraction rigs used to siphon natural resources, can literally be on fire. What resources, you ask? Well you roll a D3 before the game to determine if it’s Promethium, Noxious Fumes, or Charged Fumes in those pipes.

An objective can be on fire, untouched, or put out, and you roll for each at the start of the game to get the starting state. As an action players can set objectives on fire or put them out. What the objective markers do depend on what resource you rolled, and whether the objective is on fire or has been put out (untouched objectives do nothing). Generally, on fire objectives are more dangerous to be around.

This is all pretty cool, but the designers couldn’t resist tacking on one more thing and so there are Terrain Effects here for no reason – roll a D3 before the battle. Quicksand makes all terrain features Difficult, Deep Sand Drifts makes Overwatch more expensive and prevents you from Setting to Defend or Holding Steady, and Dunes prevent you from improving or re-rolling advances and charges.

Rob: Cut the terrain effects and this is a very cool theatre of war. It seems like it really wants its own mission to go with it.

Beanith: Careful, any mention of fire in the Charadon system could attract the attention of Ork players looking for mentions of the Arch-arsonist Snagrod… Are we really prepared for a possible Orktober 2.0?

Rob: Are you kidding? I’m always ready for another whiny shitshow on that level. The Orktober fiasco ruled.

Beanith: This theatre is the clear winner for me. Minor annoyance is only 1 of the 3 starting conditions gives you the Pipeline Sabotage action which lets you set fire to objectives upto 18” away. I know I would totally stand around the entire game constantly setting fire to everything. And Untouched is clearly fancy talk for cowardice.

These valleys are apparently meant to be filled with ruins and woods to represent the river valley. The premise here is pretty neat: There’s a dam nearby and it’s being weakened by another battle. Each battle round, the dam accrues D3 damage points and players can speed this up by using the theatre’s Sabotage rule, which lets them pick a unit in Strategic Reserves to do more damage to the wall.

Each turn players will roll to see if the dam bursts. As the dam accrues more damage, this roll becomes easier and the amount of damage it does will increase. At 0-6 points it bursts on a 5+ and units within 6” of the centre line of the table takes D3 mortal wounds (at 13+ damage everything within 12” is hit). On battle round 4, the dam automatically bursts. After the dam bursts, the terrain becomes a Mud Lake, which slows units’ movement and prevents units from getting cover from Obstacle terrain features while, while non-Flying vehicles can get stuck in the mud.

Rob: I really like the before-and-after nature for this mission. It reminds me a little of the “Blow up the Moon” Mission we did a while back that had receding flood waters. The idea that a river washes a bunch of dudes away and then leaves the battlefield a flooded mess is pretty neat. This one’s also refreshingly simple. This is the kind of mission I really want to couple with a second game of 40k or kill team running concurrently, where when that game ends with the dam being destroyed is when it floods the other table.

Beanith: I will annoy everyone by insisting on a house rule that all aircraft will also increase the damage to the dam each round  but only if they remember to talk like an old timey fighter pilot. Pip pip tally ho and sally forth to drop the tin fish say wot.

The Tri-Forge Cluster gives us three relics, and like with last month’s relics, these have smartly been ted to specific theatres of war.

The Reality Shard reduces the cost of any one Stratagem of your choice by 1. This is extremely powerful and a fun way to make some oddball strategy that depends on an otherwise CP-heavy strategy work, but it also feels like it’s going to create broken situations like “attacking with Veterans of the Long War on every single Shooting and Fight phase.” If you’re playing with these rules, you want this relic.

The Nine-pronged Sigil goes on a Psyker and does D3 mortal wounds to the nearest  enemy between 12” if you roll a 9+ to cast. This is OK-ish. 9+ doesn’t happen very often but if you run Thousand Sons there are a few ways to get +1 to cast to make it worthwhile.

Shifting Effigy lets you move horizontally through terrain and models when you advance, Fall Back, Charge, or make a normal move. This is just a neat effect that can make a unit much more interesting without necessarily breaking game balance. It’s a cool effect.

Rob: The relics are fine. I try not to judge relics in these by their raw power – unless they’re broken to the point you wouldn’t want them in your campaign – and more around just how cool they are. So in that regard, these are also just OK. C+.

Beanith: With the Shifting Effigy I am already imagining a character on a bike zipping through the wall and an enemy squad to land on the other side… I may need to start another Crusade army.. I’ve never got to rate things before so I’m going to rate the Relics B for Beanith?

Rob: Again, there are some cool ideas here, and with only a minor tweak to drop weather effects, both the Extraction Plants and the Dry River Valley have a lot to offer. This Flashpoint gives us two theatres I’d actually use (albeit with some modifications) instead of just a bunch of ideas I might pick and choose from, so that’s an improvement. The relics are whatever, though. Six or seven months in Flashpoints have been a real mixed bag, which is a shame because the “official” Crusade content in Beyond the Veil, the Book of Rust, and Plague Purge has been very, very good while this feels much less considered. Which, I get because it’s White Dwarf and not a $50 hardcover, but at the same time I’d prefer to see something a bit more workable here.

Beanith:  There have been some great ideas in every Flashpoint so far so long as you’re willing to tweak a couple of things. As I’m currently running a Crusade with some friends, I am toying with just taking all the Relics and Battle Traits from the Flashpoints and just adding them to the rewards available from completing missions from the Plague Purge book and Charadon book. I can’t wait to see what happens in the next Flashpoint point which will be all about Orks and Chaos Marines getting 2 wounds.

Rob: I think adding in these relics to the Charadon/Plague Purge content is a great idea, to be honest.

If you have any questions or feedback, drop us a note in the comments below or email us at contact@goonhammer.com.