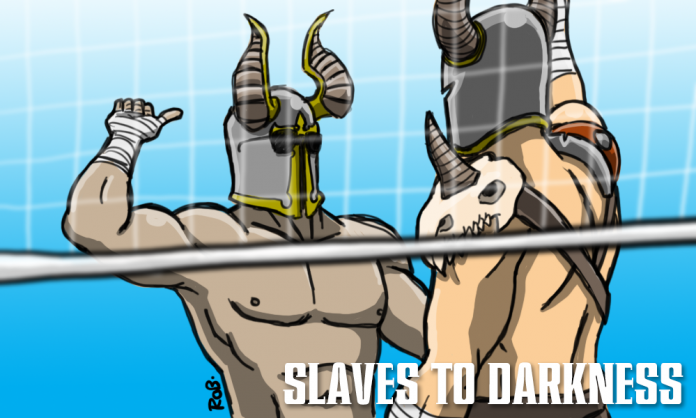 Continuing the trend set in Issue 467 with the Sons of Behemat, we got another Tome Celestial that offers expanded rulesets for Open, Narrative and Matched Play for an army while they wait for an update in the form of a new Battletome.

September’s issue contained updates to the Slaves to Darkess, the Chaos army for those who don’t want to settle for just one god (or just really really like buff barbarians). Slaves to Darkness are facing an interesting Paradigm shift as coalition rules with mono-god armies have changed the way many of their units are used. Some of their best units are seeing better use in other armies, and while the Slaves to Darkness are still holding their own they could use some new rules to make things more exciting. Does it accomplish that goal?

These are open to all game modes, as they add to the Battle Traits available to all factions. The two new traits Cultists of the Dark Gods and Cultist Battlelines tie into each other very tightly so let’s go over them together.

Cultists of the Dark Gods let’s you add a Mark of Chaos to units who previously did not get them, namely the Ogroid Myrmidon, Darkoath Warqueen, Darkoath Chieftain and most importantly the Warcry Cultist units. Even better, Cultists who take a Mark of Chaos gain Battleline status if they match the General’s mark.

This is huge. Way bigger than it should be to be a White Dwarf article and probably should have just Errata’d the “Mark of Chaos” keyword onto these units in an FAQ. The Cultists were always held back by not getting a Mark of Chaos because the army functionally needs those to really work as intended (Heroes and Priests buffing like-marked units). Broken Realms attempted to remedy this with a new subfaction but didn’t quite get there. Games Workshop has seemed to decide “to hell with it” and just made it a basic option for everyone.

The Iron Golems and Spire Tyrants have gotten some decent play in some Idolator lists even before this change. Iron Golems marked with Nurgle become one of the hardest units in your army to dislodge, while Spire Tyrants marked with Khorne can put out some decent damage on the charge. Being able to take it in any of the subfactions will open up a breadth of new options.

Two new Core Battalions and they’re both…great, actually! The first is the Chaos Warband which requires a leader, 4-8 Troops (that aren’t Varanguard) and an optional Behemoth. It gives Slayer or Unified. Slayer is a big old whatever but an easier to fill Battle Regiment is extremely welcome and will slot in well if you run out of Subcommanders to fill a traditional Battle Regiment.

The other battalion, Overlords of Chaos are 3-6 Varanguard, which will be loved in Knights of the Empty Throne lists. It’s either Unified or Magnificent, both extremely good choices. Which you chose is likely going to depend on the player but this is a powerful choice for anyone looking to rock a lot of Varanguard and really makes the faction feel special. They knocked it out of the park with this one.

Open play has always been sort of an Enigma, but Games Workshop wants to keep it around. The rules here…are actually pretty cool? There’s a “twists” table that a player can roll at the start of the game to add some sort of special rule to the match, similar to Realm Rules from second edition. There are 6 in total and they represent each of the gods pushing their influence onto the battlefield (With one being “Nothing Happens” and one having players reroll the effect each round). The effects are all fitting for the god, such as Tzeentch giving Crystal Wyldshards where all Wizards can Reroll casting rolls but take D3 mortal wounds if they do or Khorne’s Furious Bloodstorm giving +1 to wound while forcing a -1 to casts. I actually dig this a lot and the reroll each round especially sounds like it adds the right amount of anarchy to the match.

There is also a unique “Ruse”, which are player specific buffs that are only in Open Play. It simply lets you roll on the Eye of the Gods table from the outset, which isn’t bad at all.

Overall I dig the Twists and while it’s definitely not a good fit for Matched Play it fits well in the “anything goes” part of Open Play and gives it a bit more of an interesting identity so that’s probably the best place to put more experimental mechanics like this.

I really enjoy any attempt to flesh out Path to Glory because it’s an idea I want to like but I think doesn’t quite get there yet. Largely because it wants lots of flavor mechanics that don’t exist quite yet. I think there’s a lot here that gets Path to Glory into the place it’s sort of destined to be.

Eye of the Gods

Sort of the expected mechanic but welcome nonetheless. Essentially what it does is make your Eye of the Gods Table permanent. Gained Iron Flesh for +1 to saves? Well he keeps it now! This includes becoming a Daemon Prince or Spawn. This leads to a much higher stakes mechanic where your character can snowball by gaining multiple boons but one bad roll of Snake Eyes and it’s over for them. Very cool, very fluffy.

There are caveats: you can’t gain the same buff twice, and the Daemonic Legions gift goes away at the end of the battle of course. For such a simple change I think this does a lot of good for making an interesting story of progress for your Warlord.

One new quest is added as well that ties into the Eyes of the Gods mechanic. If you don’t want to wait for your Leader to become a Daemon Prince by dice roll (A 1 in 12 chance every time you kill a Hero) you can take this quest and when you get 3 boons that aren’t becoming a Spawn, Daemon Prince, Summoning Daemons or getting Snuffed by the Gods you can just fast track to becoming a Daemon Prince. Good if you don’t feel like waiting around.

Overall the mechanic is solid. Daemonhood is the aspiration of all Slaves to Darkness Mortals and taking and established mechanic and making it permanent adds a layer of investment to the narrative. Adding a quest to fast track the process helps remove frustration without going as easy as just adding a Daemon Prince to your list. From a crunch standpoint becoming a Daemon is maybe not as strong as it could be but that’s not why most players are here.

Two new Veteran Abilities. For your hordes, Cultists and Marauders there’s Countless Recruits which lets you restore D6 models once per game. Good stuff, especially on the right Cultists and Marauders. Otherwise, Mark of Chaos units can get Favoured by the Gods which lets them act as if a Hero with their Mark of Chaos once per game for purposes of the Aura. Incredibly powerful ability that I’d like to see in some form in Matched Play.

There are also two new Territories the Chaos Dreadhold and Chaos Wastes. The upgraded Dreadhold gives you D6 Glory any time you upgrade your Stronghold or Territory, pretty mundane but the Wastes are interesting. You can ally in 2 Daemon units (or 4 when upgraded). Naturally you can only have one of these at any given time but this actually is an interesting idea with some interesting and flexible gameplay mechanics. More stuff like this!

This is a continuation of a concept introduced in the Stormcast Battletome. Heroic Upgrades let you upgrade your Heroes to a different warscroll once you have the necessary Renown and Glory. Mostly they are what you expect. Want to give your Chaos Lord a mount? You can do it here. Make your Exalted Hero of Chaos a full blown Chaos Lord? Right here. This is great for serving the narrative of taking your lowly Hero to the top of the ladder of Daemon Princedom. Or he can just cheat and roll it on the table. 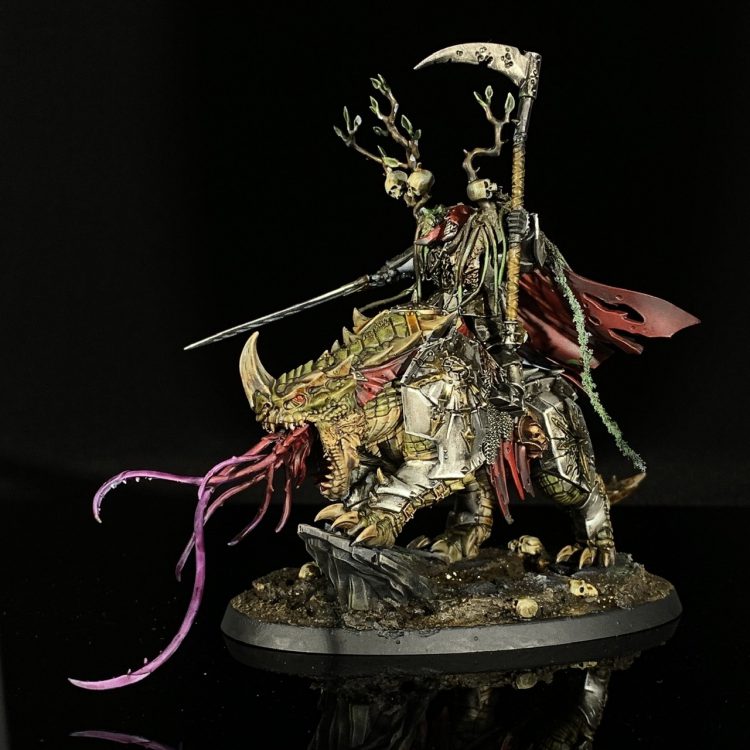 First, the Grand Strategy. Dominating Presence is interesting. You need a unit in each of the four quarters of the battlefield. That’s not too high of an ask, you have the bodies but it’s a bit of a reach compared to something like Hold the Line.  Slaves to Darkness lists often involve a lot of Marauder and Chaos Warrior spam, with a few knights. You’re in an even better place to complete Hold the Line now that Cultists can be battleline, as well. A fun diversion if you want to try something different but it suffers from the usual issue that these do that they require more effort than the stock options.

The two new battle tactics are In Thrall to Chaos and Lust For Power. Thrall to Chaos is situational but when it comes up you’ll be glad to have it. You must pick an objective with an enemy unit within 12″ of it, and then clear all the enemies off by the end of the turn. Perfect if an opponent leaves a token resistance behind on an objective that you can scoop up. You need to kill all enemy models, so don’t make a blunder and underestimate the resilience of a unit.

Lust for Power is similarly situational. You select a Hero and if they get to roll on the Eye of the Gods table, 2 VP. Use it on someone you know is likely to kill a Hero or Monster this turn, even if they turn into a Spawn it still counts.

I genuinely like these compared to past attempts. While Dominating Presence is probably still more complicated than it needs to be it’s not too bad and has fairly low requirements. The Battle Tactics are actually quite good and reasonable to complete with the Army’s playstyle. Any opponent familiar with these will need to be more careful, especially with covering their backline objectives with more than just a token force.

Huge improvement on the previous Tome Celestial, especially on the Matched Play stuff. I thought every part about this was reasonably well thought out. Path to Glory could use a bit of work but it’s getting there. The Matched Play options are reasonable expectations that aren’t so good that they feel cheap. If they can match the quality of this stuff in future supplements I think they will be in a good place.

I apologize for getting this out so late, due to late shipping to the US it took a while to get to finally writing this out. The next Tome Celestial, for the Seraphon will be along much sooner!

If you have any questions or comments please comment below or email us at contact@goonhammer.com.