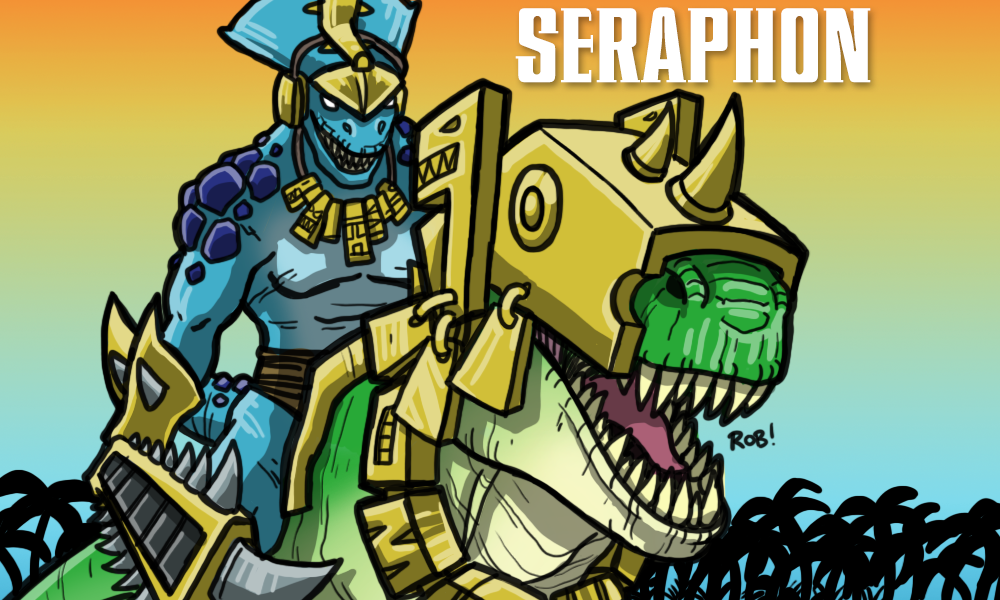 This week we’re going to finally catch up on the Tome Celestial options in White Dwarf with the most recent edition, featuring Seraphon.

Seraphon sat comfortably near the top of the ranking at the end of 2nd edition. This was sort of hard to gauge as their book came out shortly before most events were shut down for a while, but the book was very solid. It was then further supplemented at the very end of the edition with Broken Realms content and a suped -up Kroak. While they’ve fallen a bit in the rankings 3.0, they’re definitely still near the top. This made the announcement of a Tome Celestial particularly baffling as Sons of Behemat seemed to exist to shore up rules that they didn’t quite fit into (such as many of the core Battalions) and Slaves to Darkness improved an army that was doing moderately well.

As before there are rules included for Open, Path to Glory and Matched Play and we’ll examine them all for the sake of completeness.

As expected by now, the Tome Celestial comes with a supplement of new battle traits to use in all game modes.

A buff to the Coalesced battle trait of the same name. Previously, it made it so the four “positive” Mysterious Terrain features (Damned, Arcane, Inspiring and Mystical) in your terrain only apply to you while the “negative” ones (Deadly and Sinsister) only apply to your opponent.

The general agreement is that this rule is a bit of a crapshoot and reliant on you getting decent terrain in your territory. So the rule continues to work as it did but it also adds Deadly and Mystical to all the terrain in your territory on top of everything else making this much more valuable. Your priests benefit from a +1 to Prayer rolls from Mystical, not to mention the 6+ Ward everyone gets. Deadly only deals damage on a 1 but when it works free mortal wounds are nice.

This all of course assumes you use Mysterious Terrain. If you haven’t, give it a try! It’s not as daunting as it seems and makes terrain actually do something.

Two options, one of Coalesced and one for Starborne. You can put the trait on one Stegadon, Carnosaur or Troglodon in your army who also has the Hero keyword.

Coalesced get Beastmaster. Once per battle in the hero phase they may choose to be either Swift or Savage. If Swift, they can run and shoot. If Savage they can add 1 to attack characteristics of melee weapons until your next Hero phase. A great flexible trait that lets a mount do what it is good at, whatever that may be. Shame you can’t use it on a Bastiladon.

Starborne get a a new Monstrous Rampage to the selected Hero: Celestial Destruction.  Sort of like an area effect Stomp, you get to roll a die for each enemy unit within 6″ of the mount and for each 5+ (4+ against Chaos) you deal D3 mortals. Less reliable than Stomps 2+ but the benefits of using it in a large group of enemies is quite clear. The 6″ Range is especially powerful, since you don’t need to get into combat to use it, so us your screens diligently.

Both are great, though I think Celestial Destruction might eek out as better simply for being able to use it more than once. Still, it’s an upgrade nonetheless when you didn’t have any mount traits at all so it’s not competing for a slot or anything.

Yuck. One Engine of the Gods or Skink Chief, Two Bastiladons or Stegadons and one Razordon, Salamander or Kroxigor unit. The unit composition is fine but it only gives you Swift or Slayers. I’m still not convinced you’d ever want these over a Warlord or Battle Regiment, depending on what you’re going for. So a hard pass on this one unless you’re going for some sort of Thunder Lizard list and need a place to put all your behemoths.

Similar to the other Tome Celestials, some army appropriate twists and ruses are included for Open Play. First, the twists. The twists aren’t nearly as exciting as the Slaves to Darkness ones, which had the 4 chaos gods grappling for control of the battlefield with effects reflecting each god’s influence. In this case, there are two tables: One for Coalesced and one for Starborne. The tables only have 2 results, and in both cases a roll of 1-3 is just “nothing happens”. If you get a 4-6 however, the fun happens. Coalesced receive Monstrous Denizens which are similar to the wandering monsters in some narrative games in 2nd edition. A monster is placed on the field and each round the winner of the roll off gets to treat it as part of their army. A much more streamlined way of handling it rather than an “AI Table” though I’d probably give it to the player who goes second rather than the winner of the roll-off. Starborne’s unique Twist is The Astromatrix which see Ley Lines draw between each objective and each other objective, granting +1 to spell rolls for both side’s wizards. Very cool.

For Ruses, Seraphon can either choose Primal Vistas, which allows you to select a terrain piece to benefit from Primeval Domain, even outside your territory or Celestial Reinforcement which lets you roll a die and if its less than or equal to the current battle round you get a number of Celestial Conjuration points equal to the roll. Interestingly these are not tied to your subfaction, so you can either dabble in the other side’s abilities or reinforce your own.

Although a bit slimmer and less conceptually cool than the Slaves to Darkness ones, I like these nonetheless. They remain cool ideas to play around with that might be too overpowered in Matched Play, but I’d like to see them expand in that direction one day.

First and foremost, only Starborne really need to care about this. The book is rather straight forward that Coalesced continue to play as usual, but they can benefit from the additional veteran abilities, territories and quest.

If you are Starborne, strap yourself in because this mechanic is a huge departure. Unlike other armies you do not track your units on a roster, except for your Heroes! Instead a new mechanic is introduced for you: Astromatrix Points. Territories you control offers 1-3 Astromatrix Points, and granting an additional point if upgraded (it’s not clear to me if they need to be upgradeable in the first place). When building a list for battle you can add one unit for each Astromatrix point, with Behemoths costing 2 points and each reinforcement adding +1 point to the cost. The units then disappear at the end of the fight and you will repeat the process anew with each battle.

Since your units aren’t permanent, that means they can’t get Veteran abilities the normal way. Instead, roll a die for each unit on the field and for each 4+ they get one.

I love this. While potentially abusable since it lets you just build an army from whatever you want without concern for long term planning, it utilizes the fluff in a way that makes an army play totally different from everything else that might be in a Path to Glory league. Since Starborne are incorporeal beings in the lore, the mechanics properly reflect the idea that they appear and then disappear when they are no longer needed. I don’t have much more to say, but this is exactly the type of thinking I want to see more of in Path to Glory.

A super dull quest, but it does let you take advantage of the new mount trait. Simply nominate a Behemoth Hero, give them an appropriate trait and they earn it if they kill a unit. Not much to say.

One for Skinks and one for Saurus. Skinks can get +1 to hit once per game and Saurus can get -1 additional Rend for Powerful Jaw attacks once per game. Nothing too exciting but not bad either.

Two new territories, the Storm Vault and Ruined Temple-City. In both cases, Starborne get some Astromatrix Points for their trouble while Coalesced get something else. The Storm Vault can be plundered by a Coalesced Hero for a shot at an artefact of power once it is upgraded, while the Ruined-Temple reduces the cost of upgrading a territory by 10 glory. Once upgraded, you also get the option to reroll injury rolls, a nice perk. Not bad overall, and play into the new mechanic for Starborne well.

You should be familiar with these, paths to upgrade your Heroes to better versions. Skink Star Seers can become Star Priests while Saurus get a lot of upgrade options. Scar-Veterans can become Old-Bloods, and both types can get themselves a mount.

Nothing too exciting here, as these are becoming standard issue in Path to Glory. I do think no way of upgrading a Skink Priest to an Engine of the Gods or Skink Chief on Stegadon was a missed opportunity. 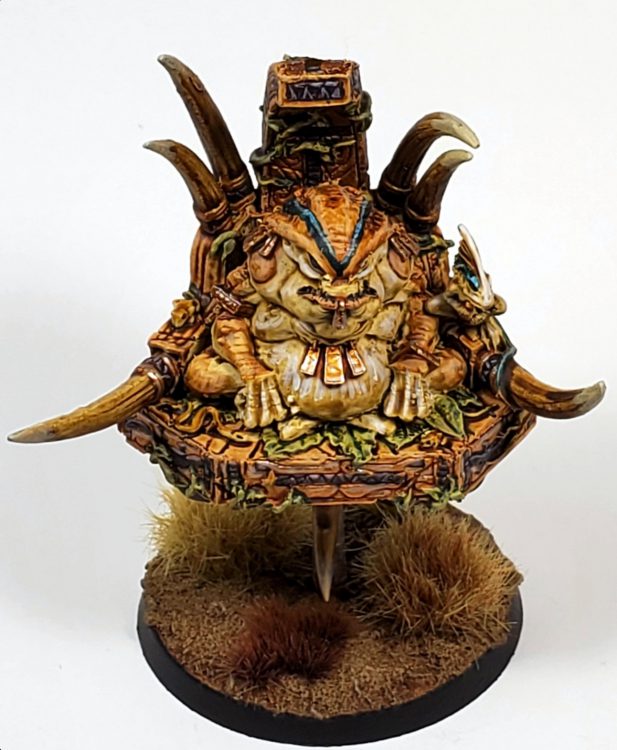 The part most of you are probably here for, new Battle Tactics and Grand Strategies.

Two new ones, one each for Coalesced and Starborne. Coalesced get Continued Expansion, which requires a unit in each of the 4 quadrants of the board. Not a big ask, and might be fun to mix things up from the usual.

Starborne get The Astromatrix which ties into the Open Play Twist with the same name. There’s an Invisible X across the board of Ley Lines, and you need to end the game with no enemy wizards on those lines, and at least one of your own Wizards on it. This one is interesting but too risky a pick. Since you don’t usually know what youre facing when choosing a grand strategy, this becomes near impossible if fighting an army chock full of Wizards like Tzeentch or Lumineth. Even if they only have one wizard it’s not too hard to just keep it tucked in the corner to disrupt your whole plan. Just stick to Prized Sorcery.

These aren’t locked by faction but definitely favor certain picks. Might of the Starborne asks you to pick an objective and summon a unit worth 20 CCP within 12″ of that objective. A very non-interactive option and might be worth banking up enough points just to guarantee that slam dunk your opponent cannot stop, even if that is a lot of points. Naturally, Starborne are really the only ones who get to do this, even thought it doesn’t call them out.

The other seems to take aim at Thunder Lizards, Stampede of Scales is like Ferocious Advance but worse in every way. You must pick 3 monsters, run with them and end all 3 within 6″ of each other and end wholly within your opponent’s territory. You don’t even get 3 VP from this like you would Ferocious Advance. Just a bad pick unless you manage to find the perfect opening.

There is one potential argument for why it exists, it’s worth remembering that Ferocious Advance is one of the Battle Tactics from General’s Handbook 2021 and the realm of Ghur, so it might not be around forever. Maybe in 2022 you’ll be glad you have this but for now, bleh.

Not nearly as exciting as past Tome Celestials but I think Seraphon players will be quite happy with it. Free Mount trait when they didn’t have one before is a straight upgrade, and some of the coolest Path to Glory rules we’ve seen so far. Definitely a hard recommend if you play Lizardmen.

If you have any questions or comments either post below or email us at contact@goonhammer.com.