Why You Should Play Events in Age of Sigmar

With Competitive Innovations in the Mortal Realms off another week due to the holiday, Marchettus has written a piece about why you should attend events.

Statistically, you haven’t been to an Age of Sigmar event. This statement is a bit like running a game at a carnival. Chances are that I’m right, but I still win if I’m wrong. If I was wrong, come to one of the next one or two day events in Georgia or the Las Vegas Open to play and hit me up. Ignore the great outdoors, family, and other responsibilities for the supreme joy and carnal pleasures of telling another human “Hitting on 4s, wounding on 3s, rend 2, D3 damage” 15 or more times in a day. Skip ahead to “Thoughts on Community” and check it out.

Cool, everyone else (up to 84.6% of you per the goonhammer reader survey). stay a while and listen. I suspect there are A LOT of event curious gamers out there based on 73.2% of readers (LITERALLY YOU) preferring competitive content yet only 18.8% of players played more than one game of Age of Sigmar per month. All you need to play an average of 1 game a month is to go to a single one day event per quarter – an incredibility fun way to accomplish this goal. I started playing this game during the pandemic and can attest to the nerves, not knowing if I was doing things right, and getting pushed in by better constructed lists played by more knowledgeable opponents. Two years on I’m still getting pushed in by better opponents but the list construction gap is smaller and I am still a big supporter of going to events early on in your mini journey.

Why You Should Go to an Event

Congratulations, I’ve harangued you enough that you are willing to take the time to go to an event and have a good time. What do you need to do next? 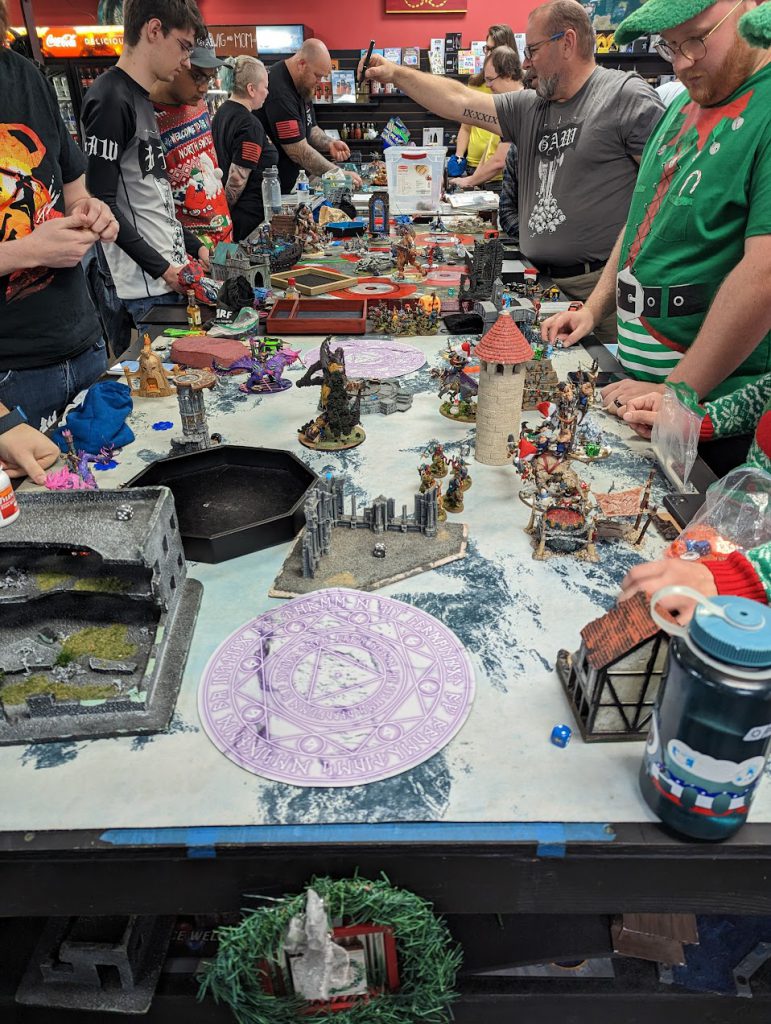 How To Prepare For Your First Event

You might note that I didn’t mention painting your army. Most one-day events don’t have a painting requirement and as long as you bring your assembled minis and they are on the proper base they will be allowed. Most people make progress on armies over time and your goal should be to get out there and play, not worry about painting up 2000 points before meeting people. Two day events typically have a painting requirement, so if you’re going to one of those make sure you have enough weeks out to paint them up

There isn’t a better reason to get into your first army than the rule of cool.  If you’re just starting out you should hit your first local event around the time you have 2000 points put together on the table. That makes selecting an army list extremely easy.

If you’re in the unfortunate situation of having choices you have to decide what it is you want to accomplish. Are you there to show off your best painted models and talk about the theme of your army? Are you there because you just really like dwarves? Do you want to minimize your mistakes?

If your goal is to minimize mistakes I’d recommend bringing a more elite list, rather than a horde. They’re typically effective at fighting, shooting, or moving and it requires a lot less energy to remember a smaller number of warscrolls during an event. Due to Covid-19 worries and having young children I didn’t play at all in person in the leadup to LVO earlier this year. I didn’t want to get sick, endanger others, or have to cancel the trip. I had to worry about transportation and didn’t want to think too much so I only brought 6 different warscrolls. I didn’t have a lot to explain, I didn’t have a lot to think about, and I didn’t have to worry about forgetting how my units interacted.

In addition to taking a small number of warscrolls consider taking manageable unit sizes. Taking 180 goblins might be fun, but moving and piling them in throughout the game might be taxing. In addition to moving around a lot of models on the field you’re going to have to manage them in the battleshock phase, rally them, and moving around those models between games.

You score points by getting by moving on objectives, by accomplishing battle tactics, and by achieving your grand strategy. You should know what each unit in your army does to be able to help you achieve these goals. It could be as simple as “My wizard unbinds and she casts mystic shield on my combat hero” or “This unit stands in front of my good unit and dies to keep them safe”. There typically isn’t a need to buy more models – just build and paint up the ones you have.

Taking a simple list doesn’t mean you’re not taking a competitive list. “Oops, all gargants”, “Oops, all dragons”, “Oops, all Nurgle flies” have all been competitive lists taken in the past year. If a friend of mine wanted to borrow models for a game I’d hand them a bunch of trolls and have them go forward and kill stuff.

It took me, a competent player, some time to think about what the difference is in play between casual and event play. My best example comes from about a year ago during a casual game. During combat I piled in a unit within 3″ allowing my opponent to active with a unit that was outside of combat. I was surprised, because I never intended to pull them into combat, and my opponent didn’t say anything until a few activations later. He didn’t offer a takeback of warn me what I was doing.

It is pretty common to communicate things like “wholly within” bubbles, threat range, moving to stay outside of a certain triggers (like redeploy), during a more competitive game. This is the essence of “playing with intent”. You might feel like you’re giving up the game by directly telling your opponent what you’re doing, but this is not poker, you win nothing by hiding information. While it’s not exactly your job to warn an opponent to pile-in might draw in another unit of enemies, for a measurement that fickle it’s good praxis just to ask “So is it your intent to draw these guys in, or not?”/

There are extremely few situations where all the information on the board isn’t available to both players. These serve to establish a board state (this unit is within 30” to unbind a spell) and guarantee that won’t change because a board gets bumped or models get knocked over. It’s always best practice to measure a potential charge before rolling and establish a distance before the dice hit the table.

Another aspect of communication is waiting your turn. Each phase has a beginning, middle, and end. The player whose turn it is does all of her actions at each part of the phase and then the player without priority does all of her actions. It’s very common to have somebody say “Generate a command point” as a heroic action in a casual game out of sequence. This is a really bad practice at events because:

I want to acknowledge that I’m talking to Age of Sigmar curious people about playing Age of Sigmar events. My knowledge is limited to my local AOS community, a larger community of people who travel to multiple events, and people online who I’ve met through twitter and TikTok. I’m fairly social and just a really average white dude with kids so I’m basically 70% of the population of every game store. It’s super easy for somebody like me to suggest “It’s so simple” to play in an event or walk into a game store. I recognize that, for a variety of reasons, my advice might right false, miss something, or be lacking. I’d love to edit this in a few weeks with a greater consideration on how Age of Sigmar could be more welcoming to you.

However, when I attempted to play 40K and Magic I didn’t get the same warm fuzzies and want to continue in those systems like I did with Age of Sigmar. It’s because the people in my local community and online community were welcoming and helpful that I wanted to continue. There are a lot of people who have fond memories of square bases and a world that was. Increasingly there are people like me who have no idea why some demon from 25 years ago matters. There are painters, those that love the lore, competitive net listers, and people that love to make quirky armies and roll dice.

Despite the view of mini game players in the general population Age of Sigmar is the most diverse group of people I spend time.  This includes discords, TikTok, in person games locally, and travel events that I started to participate in this year. Young people and old people play.  Those that have kids and those without. People with and without post-secondary degrees. People who try to recruit people to play fantasy sports and those that won’t talk about sportsball one bit. There are country folk and city folk. There is a higher proportion of military vets than any other part of my life. In a world where like-minded people continue to self-sort the hobby allows us to come together and learn one thing about those that we might disagree with in other walks of like. We’re all nerds who want to roll some dice.

Its everyone’s job in the community to make sure everyone who wants to play and participate in good faith is welcome.