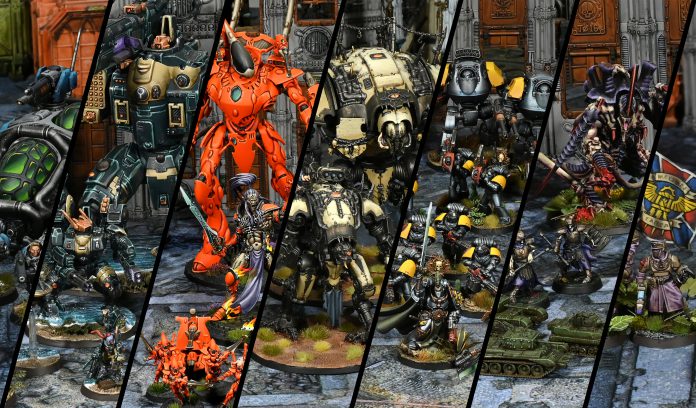 Well, it looks like we’ve done another year. Not entirely sure when that happened, but geez was this a dense one for me! Between work, becoming a homeowner, and a gradual increase in the amount of socialization I felt comfortable with doing I ended up being fairly light on finished models this year – a mere two hundred and forty or so.

Honestly, it ended up being a bit wild how big a variety of things I have worked on this year, it’s genuinely easier to list the number of 40k armies I didn’t do any models for than the ones I did. (Ad-mech, Necrons, loyalist knights, sisters, and the bespoke CSM spin-offs if you wanted to know!)

Before I get into talking about the hobby side of things, I did think it was worth mentioning some unfortunate things I figured out this year. For those that don’t know, I managed to give myself a big ole spinal injury a better part of four years ago, so between that and COVID I haven’t really been able to give events of any kind a go since I had actual full 2k armies. So, this year I dipped my toes into trying to do a few smaller things, KT and a 1k cereal hammer tournament in the benefit of the region’s food bank. While these were quite fun, they did lead to rather… detrimental tournament effects on my back. Soooooo, I guess I am looking at casual one-off games for the foreseeable future depending on what I can figure out works for my back.

Now back to more positive subjects let’s dive into what I painted this year! Since I have worked on a rather eclectic selection of models over the year, I am planning to sort of break stuff down into armies by part of the year then finish with a look back at my odds and ends.

This is a bit of a funny case as there is an overlap with last year, I spent a good part of the last few months of 2021 working on repainting my existing stock of models in anticipation of the codex. I continued to work on the army into the new year, at which point I mostly switched to working on newly bought kits.

I’m still really enamored with this army, and I’m sure it could use some more crisis suits or tanks at some point so its not like I’m done with tau!

Spring for the Elderly 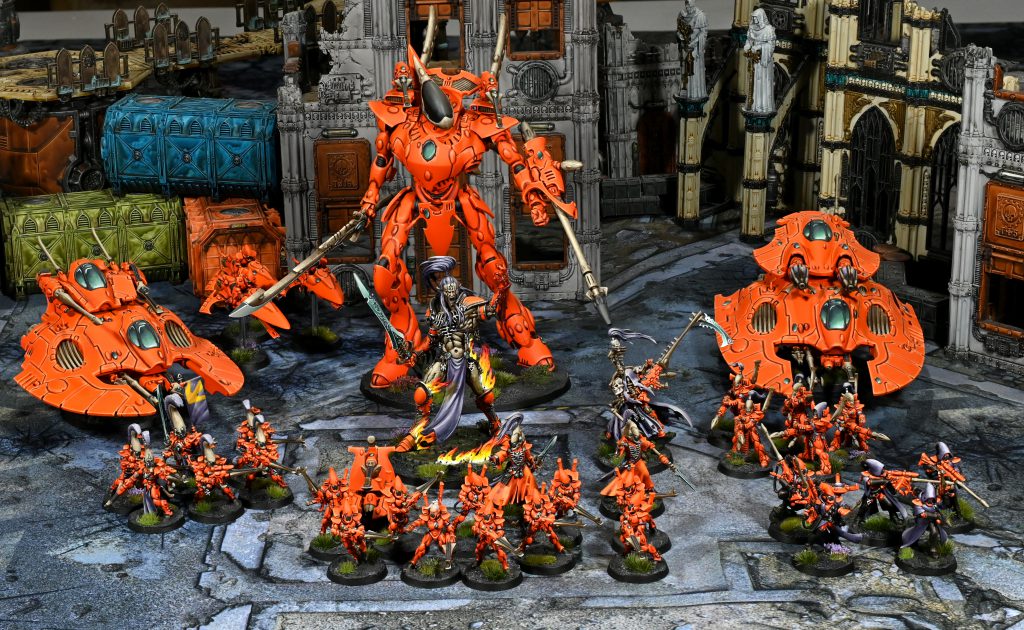 Last year I had a bit of a go at starting an Eldar army, mostly working on stuff I thought was neat and would probably still be relevant in the new codex. Once the book appeared on the horizon, I jumped back into working on them, which was really boosted when GW sent us a bunch of preview models.

Honestly though, this little group really emphasizes my broken brain towards this hobby, just a wide spattering of a bunch of different models which always results in my having wide but shallow armies. I do still find this scheme a ton of fun to work on, so I will definitely come back to revisit the army before too long. Maybe then I can work on getting it built out to be a little bit healthier.

I ended up spending most of April and May painting chaos knights, which did result in a bit lower of a model count finished in that time, but I would consider that an acceptable loss given it ended up in some nice big chonkers.  I don’t really have that much to say about this army so far as drive to create it as it was a preview army that I bolstered a bit, but it was a fun little scheme that was reasonably fast to paint while giving striking results.

It did result in me having my first playable chaos army when I toss in the other knight I have that was ambiguously schemed anyway, I’ve never really managed to survive through painting enough of the crazy over-detailed modern 40k chaos models. I can’t really stand skipping details, and chaos stuff are crazy intense with them, so I always end up spending way too long on each model. When an army needs only a handful of models to finish, it makes it pretty reasonable though. (Count wise anyway!)

So, we saw the revitalization of another game from GW this year with 30k getting a new edition with a massive range of new plastics that don’t seem to show any sign of stopping, and I got the opportunity to paint up the starter box early. I ended up going with a slightly post-30k scheme as a side effect of an earlier preview model, back in the spring a few of us got a couple of characters as previews well before the game update had been announced. We were going to have a bunch of takes on conventional schemes for Fafnir Rann already, and I was being a bit of a hipster, so I mentioned to Jack that I wasn’t planning on doing his normal scheme which led to the suggestion of doing him up in his later Executioner colors.

Then when the game was announced some months later, I debated between doing up the models in my existing Salamanders scheme and following on from one of the preview models. Executioners ended up winning out as the scheme is substantially less time-consuming despite base coating yellow taking figuratively about half the time of any of the models.

I will admit that I stalled out on this army, as painting up that many PA bodies where I needed to base coat yellow on even a minority of the model was starting to impact my mind. There’s something uniquely discouraging about getting up to five layers on a shoulder pad and still seeing the metallic coat through parts of the pauldron.

A Smattering of Dorfs

I wouldn’t even call this an army per se as I only did a handful of models, but they look neat nonetheless! I bounced around with what scheme I was going to do these models in when they turned up, I even did one of them in a canon scheme, but I ultimately just reused a scheme from my Battletech collection.

I’m not really sure if I want to fill out this army, they are reasonably quick to paint and look neat but at the same time, I’m not into them to the extent I want to devote a few months to build up a usable force.

Onto the most recent army that’s attracted my attention, these models have really only just landed and at the time of writing, I am still working through the last squad from the boxset. This isn’t the first time I’ve started guard it’s worth mentioning, and I’m back at it with a minorly modified version of my scheme. I’m not totally sure where I am aiming for size-wise for this round of working on guard, last time I only got a sentinel, a squad of Krieg, and a couple of tanks done. I might commit to filling it out to something usable now that I have the codex but I’m also looking at how I need at least a few more shock troop squads and getting a little leery. While not exactly the most time-consuming scheme, these suckers are dense with details.

I could of course follow the meta and do vehicle spam, a Russ is like an hour to two a model versus like 6-8 for a squad of ten 6.5 point models…

If you’ve noticed one of the many new columns that popped up on Goonhammer this year, you might have realized that the Battletech bug has bitten a few of our people, myself among them. I haven’t really focused on them at any point this year but I have been whipping up a quick model every once in a while, they serve as nice little breaks from working on bigger stuff since they only take a night or two to finish.

I do tend to be more into the inner sphere designs, I have an under-strength company of them in this current scheme along with a couple of random lances I did years ago when I got the core box. This is not to say I don’t plan to get more clan stuff done though; I have a Thor/Summoner next up in my painting queue I think along with an endless mound of more models to work through in my backlog.

This is a really random collection of models I either wanted to do on a whim or were preview models that don’t really fit into any of the rest.

I don’t really have any order of presentation with these, some models are ones like the additions to my dropfleet resistance fleet which are done up in a scheme I am rather enamored with but never really find the time to work on without games in my near future. Others are the opposite, like the hive tyrant that I did specifically because I had an upcoming charity tournament! The biggest model count in this group is the chaos models I did in the lead-up to that book launching, with the least being the Ork rocker which was a fun one-off model.

There were some that are clearly an indicator of my advancing age, as I did a trio of tiny tanks as the first historical models of my painting career and I can only expect more in my future at some point. Whereas the skeletons are a group from a game that I don’t really have any interest in but are rather neat models.

If I were to have a guess as to what the new year brings to my painting table, I would point towards guard or maybe even Star Wars legion as a buddy did an intro game with me that was fun. Beyond that, I’m sure I will bounce erratically from project to project as ever!