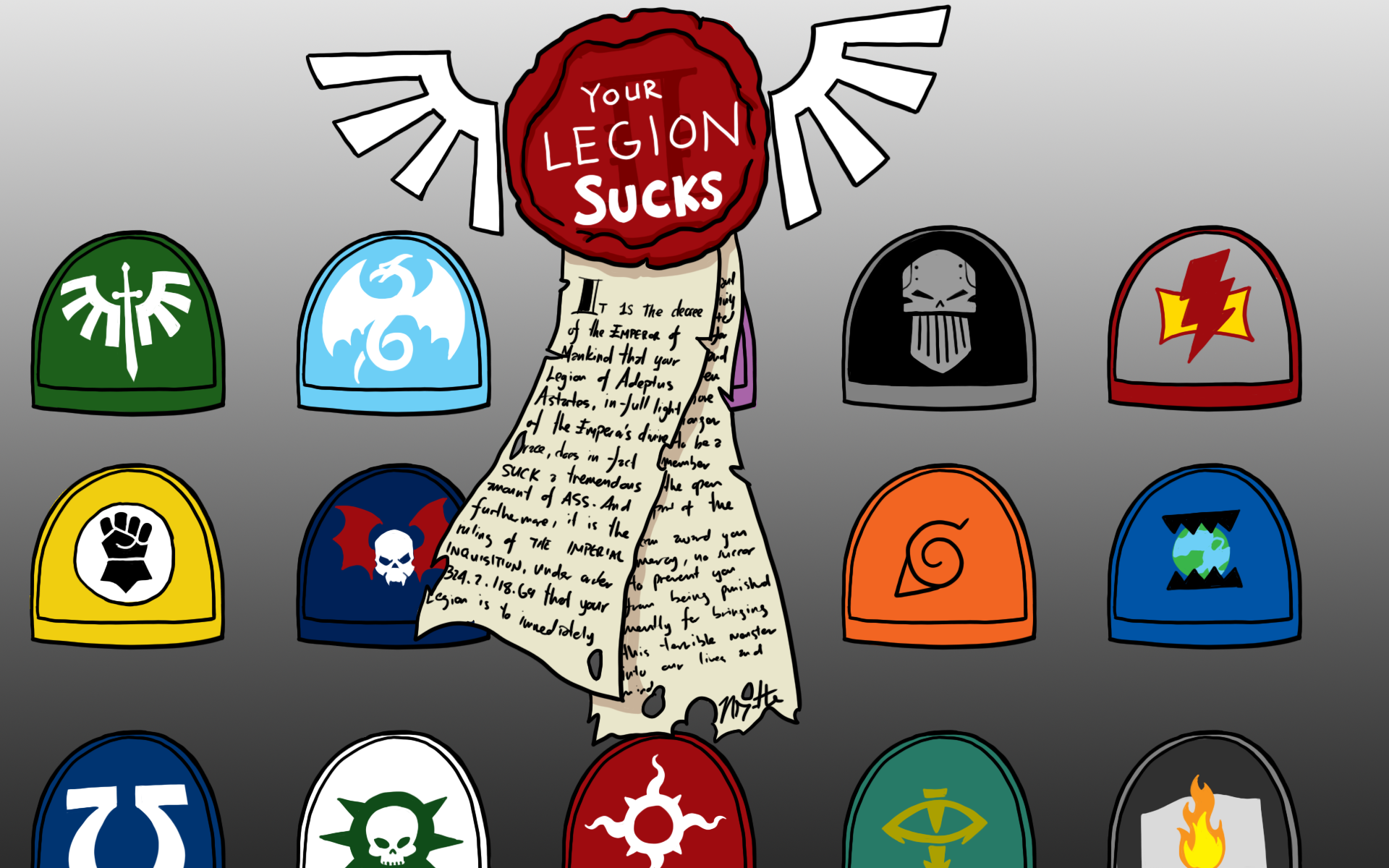 Hello friend, and welcome to part one of Your Legion Sucks, a joint project from ANAmal.net and TheChirurgeon, the dumbest and worst (respectively) authors on this hell website. Since sometime around 1990, Warhammer 40,000 fans have wondered to themselves, and to people around them who really wish they’d stop talking, which legion of Space Marines is the best, coolest legion who fucks the most. But while Games Workshop has provided tons of models, novels, and rulebooks about firing bolters and horusing heresies, they’ve failed to definitively tell us which legion is the best and which legion is made of abject shitbirds. Except the Word Bearers. They’ve told us enough about Lorgar’s Nerd Sons to know that they’re in the latter camp.

Anyway. Wonder no more! We’re here to finally answer these questions by providing objective, definitive, one-hundred-percent dead serious ratings and rankings for all 20 Space Marine Legions. No, you can’t see any of the other foundings. We fired them. Because they kept fucking up.

Sit back, throw on your best determined grimace, ready your wettest leopard growl, and join us on our journey through the 41st millennium’s most famous angels of death.

In this first installment, we’re covering the first five legions of Space Marines, in all their glory. We’ll pick up part two with the next five, then pick up another five in part three two or three months down the road, then get bored and say “fuck it” and never release part four. You might call this the “Forge World” release model.

I Legion: The Dark Angels

TheChirurgeon: Look at this fuckin dishrag

ANAmal.net: The Dark Angels might actually be my least favorite legion.

TheChirurgeon: This is a legion near and dear to my heart because I’ve dunked on them so many, many, many times in games. Admittedly, that may be coloring my views to the positive, but I have a soft spot for them, particularly when they’re done up with the sick checkered patterns and red racing stripes.

ANAmal.net: Notably, none of mine have stripes or check marks, so that scans. Dark Angels are fun because you basically have three different armies, so depending on the day you can decide to paint green badly, or paint bone badly, or paint black badly. They’re less fun when you consider that they have strong Teen Goth vibes, just agonizing over coming home from hanging out at the Space Mall and getting a stern lecture because Dad found their secret stash of Chaos. “It’s not mine!” Azrael will plead, as he’s grounded and has his bolter taken away.

TheChirurgeon: The worst part about the Supersizing of Space Marines is that the coolest parts of the Dark Angels – the Ravenwing and Deathwing – are just getting replaced by a bunch of green armor fuckos.

ANAmal.net: On the one hand, absolutely correct. On the other, it rules that the Dark Angels are self-defeating weirdo fuckers that screwed up the only cool thing about their chapter by being incorrigible dipshits.

FINAL RATING: 2 out of 5 Vaguely Native American Feathers Dangling from a Storm Bolter

ANAmal.net: Are some drawings, crimes?

TheChirurgeon: *Reading notes from DeviantArt*… OK so looking at this it looks like this is the official art of the II Legion primarch, Utena Usagi Pendragon. She’s half-Eldar, and has psychic powers on the Emperor’s level. As primarch of the II Legion, the Psydragons, she rides around on a giant white dragon with blue eyes.

ANAmal.net: I haven’t read the Deviant Art page, and I absolutely will not, but I’m going to go ahead and assume that a) it’s Canon, and b) this is actually a ten thousand year old daemon in a child’s body. Can’t imagine why Eldar-chan up there might have been purged.

TheChirurgeon: It is absolutely canon my dude. This is iron-clad, straight-from-the-mind-of-some-guy-on-the-Horus-Heresy-novel’s-mind levels of solid canonical primarchery. Just an unadulterated look at the secret truths of the Imperium. Probably.

ANAmal.net: I’m also helplessly picturing her putting that helmet on and the thing just filling up with hair so bad that she can’t see out of it, or turn her head without something getting stuck in the gears.

TheChirurgeon: Actually, I think you’ll find that purging the second legion was an extremely difficult task for Leman Russ, because of the fact that he was hopelessly in love with her. It’s poetic, really. This story of the star-crossed love between a half-elf psion of tremendous power and teen wolf.

Also in the notes it says that Russ’ real name–which he only told her–was “Jacob.”

ANAmal.net: I always knew Russ was a creepshow but this is beyond my worst nightmares.

ANAmal.net: Wait, you said this was from DeviantArt, but not which DeviantArt. Is it yours? Did you draw this just to fuck with me? You son of a bitch.

TheChirurgeon: No man this is 100% official Games Workshop(™) original material DO NOT STEAL

ANAmal.net: Finally, a Legion That Fucks.

TheChirurgeon: The Emperor’s Children are great because they perfectly embody the coked-out spirit of glam metal’s procession through the 80s. Like they start off all Deep Purple but eventually end up going full Whitesnake and it fuckin owns.

ANAmal.net: Yeah, they’re every metal band that started with 4 members and just kept adding musicians until they had like 13 people on stage just making an awful racket, only with these dudes dousing the crowd in phosphex is a deliberate part of the act. Doing drugs and getting weird is extremely cool, and the only surprising thing about them falling to Chaos is that their patron god could just as easily have been Nurgle instead of Slaanesh, with the way these guys like to party.

TheChirurgeon: I like how every single rumor for the last two years has been that Snake-Fulgrim is right around the corner. It’s a good indicator how bad people want the modern, coked-out version of these guys, rolling around on 40k Doofwagons and blowing shit up with their dubstep guns.

ANAmal.net: I know he’s more of a joke meme than an actual model you can take now, but I don’t think GW has ever come up with a special character that more embodies their sub-faction than Doomrider. Just a cornball weirdo with his head on fire, tear-assing around with zero battle plan beyond being cool as hell, and he doesn’t do anything unless he feels like it.

TheChirurgeon: The Emperor’s Children not getting a modern update that’s a cross between Fury Road, Twisted Sister, and Hellraiser is maybe the biggest missed opportunity in 40k.

FINAL RATING: 5 Cool Anime Swords out of 5, insanely radical dudes with whomst partying would be entirely worth the certainty of getting dismembered at the end.

ANAmal.net: I know what these are. These are nerds. I do not respect them.

TheChirurgeon: There’s something about them being a bunch of bitter shut-ins that spend their downtime playing wargame simulations that I can really relate to.

ANAmal.net: Yeah, I can empathize with that, but I feel like this game is about escapism, and I don’t know that playing an army of unlikeable dweebs still mad about getting stuffed into lockers years ago really scratches that itch for me.

TheChirurgeon: Jokes aside, the Perturabo novel is cool as hell. The Hrud are incredibly sick, and I’d love to eventually see them in 40k one day.

ANAmal.net: My favorite thing about these goobers is that they really hate the Imperial Fists (which, obviously, same), to the point where they only show up on Terra to rumble with Dorn’s buildings, and then fuck off to build a horrible fortress that has the sole design specification of maximizing how many Fists it can gruesomely murder. Otherwise, they sure are A Legion, I guess.

TheChirurgeon: The story about how they build a bigass fuckoff fortress in the middle of nowhere just to clown on the Imperial Fists when they fight their way to the middle only to find out it’s not protecting anything but another killing field is maybe my favorite moment in the 40k fiction.

TheChirurgeon: Storm of Iron is pretty good too. For a legion of bitter loser fucks, the Iron Warriors have some of the setting’s best stories.

ANAmal.net: True, but on the other hand they built (grew?) the Daemonculaba, the insane meatforge that used slaves to create boneless skinless Chaos Marines, which is horrifying for exactly all of the wrong reasons.

TheChirurgeon: Sounds metal as fuck to me.

TheChirurgeon: It takes powerful energy to come back from having your ass kicked by Mulan to start a space marine legion.

ANAmal.net: There are few things cooler than whipping your dirtbike through the heresy and firing a boltgun wildly into the air like an idiot. I’m not even being ironic, I genuinely think the Mullet Dirtbag Legion here has a powerful Scumbag vibe, and I approve.

TheChirurgeon: Actually after looking at the art for Jaghatai Khan, maybe I should have commented on his Harry Potter-ass scar.

ANAmal.net: I know they’re supposed to be Mongol Hordes crossed with Hell’s Angels, but to me these dudes will always be backwoods Appalachian types. It all checks out: they have lightning bolts on their cars, which is the 41st millennium’s Monster Energy logo, bad tattoos, and problems with authority. They probably only started making souped-up land speeders to run ‘shine (the bad kind that makes you go blind) past the Arbites patrols, then dropped out of Marine School to get really into Gymkhana.

TheChirurgeon: I always figured they were supposed to be the Huns but after reading that I’m gonna start modeling White Scars bikes with little banjos and jugs strapped to the back so when they’re done whuppin’ ass on the battlefield they can have a regular hootenanny.

ANAmal.net: I bet their chapter master rolls coal in his Land Raider with a big Eye of Horus flag on the back. Nevermind, I took it too far, and they aren’t cool to me anymore.

TheChirurgeon: Aw, you ruined it.

FINAL RATING: 3 out of 5 Red and White Pickup Trucks rolling through the underhive blasting John Cougar Mellencamp’s “THIS IS AAAAARRRREEEE IMPERIUM”

ANAMAL.NET DISAGREEMENT BOX: I’m really getting more of a Toby Keith “Boot In Your Ass” Vibe from these dudes. 3 out of 5 “Throwing a ShitFit Because Someone Didn’t Stand for the National Anthem”s.

Hey, Come back for more of this for some reason in a week or so

And with that, we’ve wrapped up our first installment. We’ll try and do one of these per week, until we publish our final, extra-special bonus article that has the full rankings and settles the definitive question of which legion is the best (the II legion, obviously). Until then, if there’s something you think we missed, or if you’d like to dispute our rankings, feel free to open the back door of your house and holler your opinions at passersby on the street. Word of your dissent will get back to us eventually, I’m sure.