We recently spoke about the new Zendikar Rising set and its impact on Commander; this week we have a special guest – Shane from The Dive Down podcast – joining us to talk about the set’s impact on the Modern and Pioneer formats in a two-part series.

Greetings, everyone! Shane here from The Dive Down podcast. If you aren’t familiar with us, we are a Magic: The Gathering podcast for the casual spike, focused on the Modern and Pioneer formats. We drop new episodes every Friday morning. Each week we talk about the latest meta developments in Modern or Pioneer (and sometimes both), then head into the Dive Down segment where we go over a deck in-depth, go over a strategic level-up topic, give our thoughts on new break-out decks with potential, and, of course, talk spoilers.

During the spoiler season for Zendikar Rising, we have spent the last two episodes discussing powerful and interesting cards that may have an impact on our favorite formats of Modern and Pioneer. With a powerful new card type, Zendikar Rising looks to be another in a series of potent MTG sets!

These new “dual” lands allow you to pick one of two colors as they enter the battlefield, and will come in enemy and ally versions. Strangely in Zendikar Rising we are getting six of the ten lands instead of the typical five, but we have been promised the other four in Kaldheim.

I tend to believe these will be pretty darn good for Pioneer, but will have peaks and valleys depending on the colors, devotion required, and curve of the deck you want to play. I think they are broadly good in that they don’t really favor aggressive decks or control decks, but they aren’t crazy good in that they make casting something like RRR, or even RR, hard for some multi color decks, which is a real consideration for some of the greedier game plans out there.

In Pioneer, I probably put these on par with Fastlands, probably slightly better than pain lands, but that depends if you are needing something like, say, G into RR in an aggressive deck, which would still make me want to play a Gruul painland (if only we had access to those in Pioneer) over the Pathway, because my life total is less of a concern.

In Modern, I’m not entirely sure how I feel about these. Always being painless and untapped is certainly nice, but the 3-color decks right now either get by on the incredible combo of fetch/shocks, the new Triomes, and snow basics, OR have such tense color requirements (like Jund) that they are priced into running things like Blackcleave Cliffs to have Bolt/Push mana and still able to cast Seasoned Pyromancer or Liliana of the Veil later on curve, which require 1RR or 1BB, respectively.

Note these can’t be fetched, so that’s a major issue. The Fetchlands are so fundamental to Modern manabases that it’s hard to get a non-typed land in there at times. I think they will have some utility in some Modern decks, but I am unconvinced for now that these are powerhouses in the format.

It’s great to see these lands get printed, and I believe they offer players a lot of decision points in building their manabases, which is great! 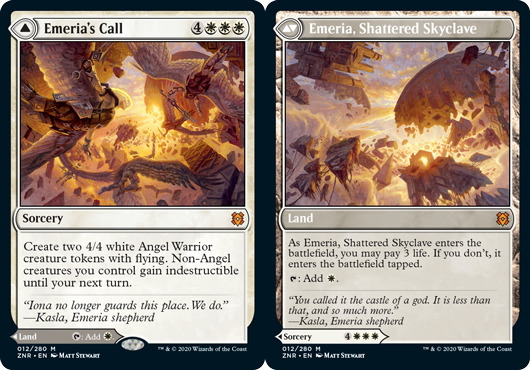 The Other Spell Lands

I’m just calling these the “flippy lands,” because I think it’s funny and that’s what really matters.

The Mythic cycle of these is, perhaps unsurprisingly, the most impressive to me. While the cost to bring these single-colored lands in untapped is somewhat high at three life, the spell sides of some of these are so impressive in comparison to the opportunity cost that they will almost certainly see play in some number.

Emeria, Shattered Skyclave is great to play as a land early in a control shell, bounce back into your hand with a late-game Cryptic Command, then cast as Emeria’s Call to get two angel finishers. Agadeem’s Awakening offers a substantial amount of recursion for a somewhat reasonable cost, and both sides play well in something like a Death’s Shadow shell. Early on it can be a quick way to lose 3 life, and late-game provides recursion of a Shadow, a Scourge of the Skyclaves (which we will get to later), and maybe something like a Ranger-Captain of Eos! Turntimber Symbiosis is a low floor/high ceiling card for Titan-based decks, and increasing the variety of named lands in your deck always helps Field of the Dead.

For many of these flippy lands, the balance really lies in the value of the flexibility and the cost of the effect. Wizards seems to be erring on the side of caution for the spell costs, so I wouldn’t be surprised if many of these don’t see play, but 1 or 2 are certain to have slipped through the cracks.

Cards That Aren’t The Flippy Lands

Okay, now that we have these wild flippy lands out of the way, let’s get to some other cards I think have some potential.

This card has been getting a lot of attention, but I’m personally of the opinion that it’s probably… good-ish! I like that it doesn’t have to survive beyond the ETB to get the copy effect. And, of course, the cost of 1U for a 2/1 that duplicates a spell is pretty proven in Snapcaster Mage. However, this doesn’t provide any selection or nearly-guaranteed card advantage, like Snap does. Thankfully at a 1U casting cost you are likely to still have cards in hand. But it’s a tremendously worse late-game topdeck than Snap, and doesn’t have flash.

It’s also somewhat harder to use than Snapcaster. You also have to have two targets for the spell you want to cast— not literally, of course, but for the card to be useful that’s what you’ll want to see. That’s worse than Snap, too. And then the Kicker cost is basically trinket text.

So I wouldn’t be surprised for this to be a total flop, but I would much rather players figure out ways to generate some decent value with it! Time will tell.

As a huge Tron fan, I don’t like this card! It’s cheap, powerful, cycles, and is definitely something red-based decks can consider running to fight land strategies. There is a potential tempo issue, here, though, for lower to the ground decks and I’m not entirely sure red aggro decks don’t already have an advantage over some big mana strategies. So potentially it’s more advantageous for red control decks, but I think it’s a useful arrow in the anti-land quiver for decks of all types.

It importantly costs 2, which allows you to not be beaten by turn 3 Tron when you are on the draw, also serves as a way for decks to fix their mana under a Blood Moon, has some cool options in Pioneer with Darksteel Citadel to serve as a Rampant Growth that draws a card… it just does a lot for a little, and I think will be a commonly seen card in decks in both Pioneer and Modern.

I hinted at this card earlier, but Scourge of the Skyclaves is just great, especially in Modern due to the painful manabases more frequently seen there. This card likely slots right into more aggressive Rakdos decks, and seems like a natural pairing with Death’s Shadow in aggro builds of that shell. While the kicker is likely as relevant as flavor text, the default mode of this card just makes too much sense for any aggressive deck that can cast it. If you are pointing burn at your opponent’s face and beating down with small creatures, I can’t imagine not playing the Scourge.

While this likely isn’t blowing anyone’s mind, Skyclave is just a solid card that’s a weird mix of Flickerwisp and Banisher Priest. It hits a lot of relevant cards, exiles it so it’s not in the graveyard, and importantly permanently removes the original threat. Even if your opponent removes Skyclave Apparition and gets a token back, that token is likely worse for them than what you exiled in the first place. I think this is incredible in Soulherder decks and Eldrazi Taxes shells, for sure. Note that this Spirit doesn’t fly. So. That stinks.

Targeted enchantment hate in Black! This latest violation of the color pie by Wizards is particularly crazy. Not only does it allow for enchantment removal in Black, which formerly had to rely on the already powerful option of hand disruption, Feed the Swarm has a fail-safe mode of just destroying any target creature! Sure, you pay some life to do so, but that isn’t even necessarily a bad thing (looking again at Death’s Shadow). A nice new failsafe for Black decks that they didn’t previously have before and will certainly see play in some metas. 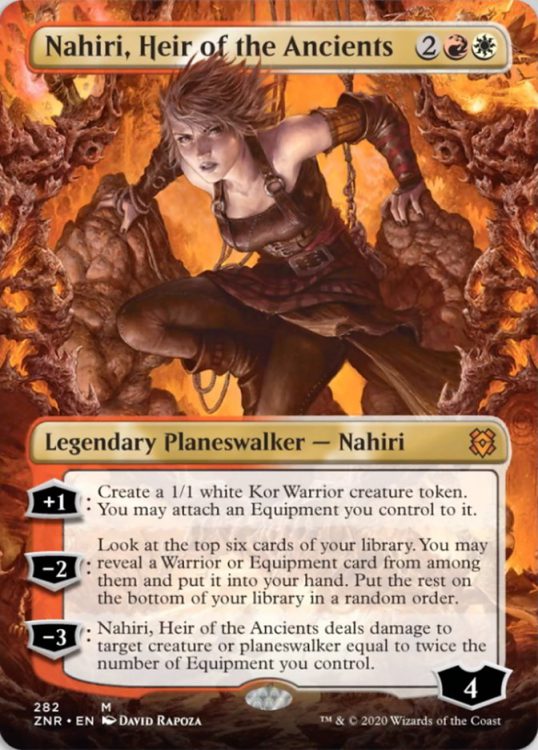 Nahiri, Heir of the Ancients

Based on my experience, the latest Nahiri seems to do one of two things: get you really excited, or make you say “4 mana equipment matters Planeswalker, huh?” My co-host Dave and I are in the latter group. I look at Nahiri and see a marginally useful Planeswalker that costs four mana, must be built around with Equipment and/or Warriors, and doesn’t really ultimate. Stan and regular guest host Aspiring Spike look at this and see a way to plus up and create a creature that cheats on expensive equip costs for things like Colossus Hammer, or minus for some card selection or to take care of a creature or walker across the table. Live the dream, I say. I honestly hope Nahiri can do something cool in a Boros equipment deck, perhaps an adaptation of the existing Sigarda’s Aid/Colossus Hammer style decks, and prove the haters like me wrong.

So long, Abbot of Keral Keep! Probably! Another quality 2 drop for Red prowess-style decks (and potentially others), which was sorely needed as an option. You likely get there on having 4 or more spells in most games. The tap rummage-style effect is also valuable as it provides some late game card selection by turning topdecked lands into some reach. I personally am not super sold on this in Modern, but I like the general power level and activated ability for sure.

That’s enough takes for this article, I think, but check back soon for the next half of my (or our, really) Zenkidar Rising picks to click!

Have any questions or comments? Drop us a note in the comments below and be sure to check out The Dive Down Podcast by clicking on this link.