Hello again! Shane here from The Dive Down Podcast. Last week I wrote up some of our thoughts on the first batch of Zendikar Rising spoilers, and the second half is potentially even more exciting! The set looks to have some powerful options for both Modern and Pioneer that will likely enhance existing decks and potentially create entire new ones. So let’s get into part 2 of Zendikar Rising Rises!

For the podcast version:

Who knew we all needed a Steppe Lynx in red? While white is often a somewhat aggressive color in Standard and even Pioneer, white in Modern has historically been a bit weaker, and made Steppe Lynx a bit player in the occasional Tribal Flames aggro deck. But you put that same +2/+2 landfall trigger on a 1-drop in red and now we’re talking! While the Hellhound is a measly 0/1 without any Landfall triggers, it’s not hard to imagine this consistently getting in a good amount of damage early, or trading up with another creature after a fetchland into a shock gives you two Landfall triggers, and the opponent is forced to block or take 4 damage.

I will get on my soapbox here for a second and remind everyone it’s pretty easy to live the Landfall dream, instead of being prepared for the Landfall rude awakening. You aren’t always going to get Landfall triggers every turn, especially in an aggro deck that is running 20 lands or so, let alone always have TWO triggers from a fetchland. The floor of this card is quite bad, in that it has no inherent power at all without more lands being played to the battlefield. So be reasonable in your expectations here. However, I think there’s a lot of potential damage in this little Hellhound, so be prepared.

I’ll be honest here and say this isn’t really anyone from The Dive Down’s pick – this was something that regular guest host Aspiring Spike brought to our attention on our second spoiler episode. While it’s tempting to dismiss Omnath as yet another multi-color legendary EDH card with a lot of text, reading the card more closely reveals that Omnath is… pretty awesome. Even though it costs four mana in as many colors, this is barely a restriction in the types of decks that Omnath will thrive in – multicolor control decks in Modern and Pioneer.

Omnath does everything. Draws a card to replace itself, gains you life, generates mana, and even can deal direct damage if things are set up just right to get that third Landfall trigger. I mean, look, it’s not that unreasonable to imagine fetchland into land and crack a Field of Ruin on a single turn. Cards like Omnath are pretty brainless to choose to run – if you can cast it in a midrange or control shell, you do it.

Early tournament results have me fearing that Omnath will be as annoying and omnipresent as Uro, as it slots right into decks like 4C Reclamation and 5C Niv-Mizzet in Pioneer, and the multicolor Uro piles of Modern. But if these are your type of decks, enjoy your awesome new toy!

Editor’s Note: For more on Omnath, Locus of Creation and building around this card in Commander, check out our article on the topic. 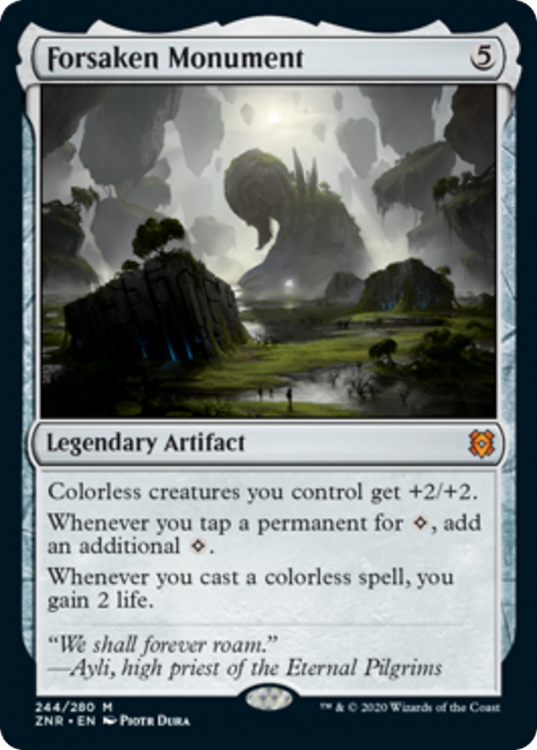 If there’s one card I don’t really know how to value just yet, it’s this one. I think it’s doing a lot for colorless ramp decks that can either have it in a Karn, The Great Creator wishboard or even run it main deck. It just does a little bit of everything – it helps you fight through land disruption by generating extra mana off your Tron lands, Eldrazi Temples, or Wastes.. It gains you life. It pumps up your creatures. It makes you pasta!

I can imagine this doing some good work for Eldrazi Tron and regular Tron, but I’m not sure this does anything surgical enough to warrant inclusion. Do you really need your creatures to be bigger? Do you really want to pay 5 to ramp a little bit more later? Do you really need the lifegain? Maybe the optionality here is better than being great at one single thing.

Honestly, though, Ruin Crab is going to be great for Mill. The rule of eight applies here, giving Mill players another Landfall miller to play on turn one, in addition to Hedron Crab. Redundancy makes decks better, and this will certainly help Mill out. Mill additionally got a few other potential upgrades, so I wouldn’t be surprised to see a lot of Mill on Magic Online in the near future.

Editor’s Note: We also wrote about Modern Mill recently! Check that one out here. 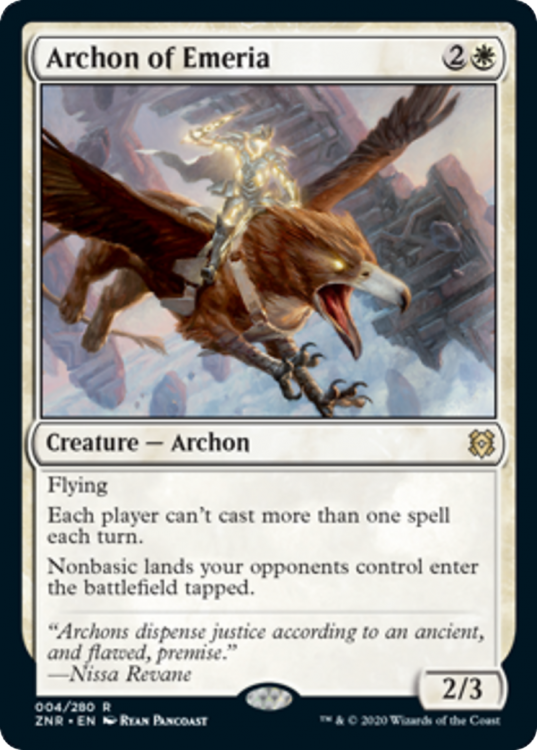 While this card isn’t particularly jaw-dropping, I think this is a moderately useful in some specific archetypes. It’s a 2/3 flying Rule of Law with a bit of Thalia, Heretic Cathar thrown in for good measure. I can see this being a useful sideboard card against spell-based combo decks, or just a generally annoying bit of tech for white-based taxes decks.

That’s it. That’s the paragraph. A useful card that won’t break anything wide open, but just add another option for disrupting opposing decks.

While somewhat narrow, I think Grakmaw has some real potential in the fallen star of Golgari Scales in Pioneer. It synergizes fantastically with the enablers of Hardened Scales and Winding Constrictor, and most of the other creatures in the deck will have counters as well, which then triggers adding additional counters to Grakmaw. Even if Grakmaw is removed, the opponent then has to deal with the remaining Hydra token!

It’s easy to see the type of pressure this puts on the opponent: if they remove Grakmaw, they have another creature to deal with afterwards. If they remove your other creatures that are applying pressure, Grakmaw grows larger, and the Hydra that comes afterwards does too.

While Golgari Scales hasn’t turned out to be one of the defining decks of Pioneer, this card does add something to the deck, and I wouldn’t be surprised to see people testing the archetype again in the near future.

An efficiently costed enchantment for red-based aggressive decks that does two things that you really want to be doing most of the time, and one thing you might want to be doing sometimes. That’s not bad! Pinging your opponent for one damage every turn certainly does add up, and paying a single red mana to turn off your opponent’s ability to gain life whenever they try is quite powerful. That Weather the Storm or Uro trigger isn’t looking so great now, is it?

However, cards like this aren’t ever super easy includes into aggressive red decks. What’s coming out for this? Is it a sideboard card, or does it even find its way into the main? That’s the more challenging thing to figure out.

Finally, let’s talk about a card we missed in our spoiler episodes, but is already showing up as a game-changer in Pioneer and Modern: 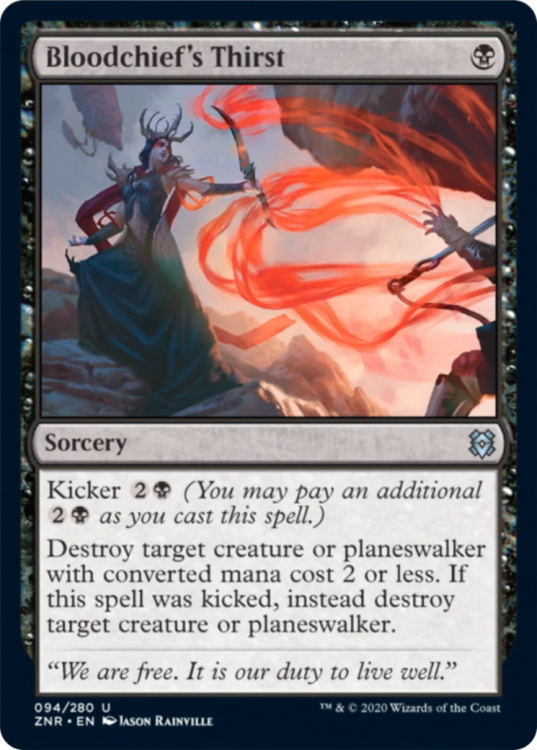 It’s so baked into our brains that creature interaction, even one CMC interaction, has to be an Instant. If it’s a Sorcery, I send it back! Unfortunately, that leads to some misses like this. This card is already seeing play in Pioneer and Modern, with some players even choosing to run it instead of Fatal Push, a multi-format staple. Why?

Well, for starters Bloodchief’s Thirst is one mana removal that is already generating mana advantage – you pay one mana and can kill something that costs two. No-brainer. Sure, it’s not instant speed, but the value is already there.

The more interesting part, perhaps, is the kicked mode. While it costs 2BB total, it’s just an unconditional removal spell for a creature or Planeswalker. Not the most efficient cost in the world, but it gets the job done. But the important thing to remember here is: the opportunity cost is very low. I like to compare this card to Hero’s Downfall – unconditional Instant-speed removal for a creature or Planeswalker, at 3 mana. A standard powerhouse that occasionally saw some Pioneer play, but never really sniffed Modern, right? One of the reasons for this is that it has no cheaper casting cost – it always costs 3, and 3 is a lot to spend on a removal spell if a Goblin Guide or Monastery Swiftspear is beating you down starting on turn one.

So, sure, it’s not always efficient, it’s not Instant speed, but it is flexible, and flexibility can be more valuable than one may think.

Next Time: A New Episode and the Impact of Zendikar Rising so far

Well, that ends our early look at the cards of Zendikar Rising. It’s almost certain that we overrated some cards and overlooked others, but that’s the name of the game, right? Being surprised at what works and what doesn’t is part of the fun. Be sure to listen to The Dive Down every Friday as we examine the developing Pioneer and Modern metagames every week!