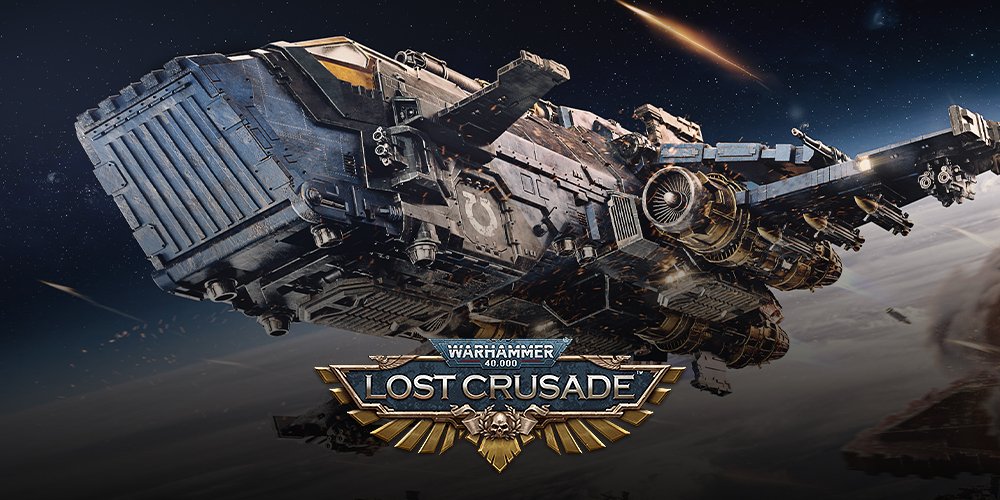 Games Workshop’s history with video games is… up and down. Recently they’ve been farming out mobile games at a rapid rate and the results are as you would expect. Here, we take a look at their latest effort – Lost Crusade

The game is described as a Strategy MMO, and I think we all know what that means. Following the very successful blueprint of games such as Raid: Shadow Legends and Clash of Clans you will spend your time building up your base, collecting resources, upgrading your base to improve your combat capability etc. As far as this goes there isn’t really much new to be found – this is not an arena for innovation in gaming – but it’s a proven formula that works.

I won’t go into spoilers here, but frankly there isn’t much of a story. You are a crusade force that got lost in the warp and find yourself having to build a base around your battle barge. There are plenty of cut scenes and dialogue but most of it is “for the Emperor!!!” and “I will get you Space Marines mwahahahaha”. It’s a thin justification for the premise of the game, not an epic Black Library tale.

The game is currently in Beta and publicly advertised as such, so take everything with a pinch of salt. However, I have played for quite a few hours now and not found a single bug which is quite impressive. Gameplay revolves around watching for little red icons on things saying that you have an action to perform (hero needs upgrading, quest completed etc). This can be quite annoying as there are so many options that often you’re left hunting through sub menus of quests to find out what you accidentally completed.

The initial hour or so was quite bewildering as I clicked on what I was told and resources of all different kinds flew into my inventory. At current time of writing I have 40 different resources in my inventory and I haven’t a clue what most of them do.

The “things to do” are quite varied. You can follow the story missions, explore space around you for resources or attack nearby Chaos bases, build up your alliance’s base by donating resources and building defence networks, attack Chaos ships that appear near you and do PvP battles. I haven’t tried the PvP yet, either it’s not available in Beta or it requires your alliance to declare war, I haven’t quite worked it out.

The combat sections are fairly basic. You select heroes who run forward firing their guns and attacking, who build up resource points. You can use those resource points to either activate their special abilities (the Librarian has an AoE attack, my Redemptor Dreadnought has an invulnerability shield) or summon units of troops. Currently I have unlocked Intercessors, Assault Marines, Dreadnoughts, Predators and Whirlwinds. All of these can be improved by upgrading your base. This does give some tactical nuance as you need to work out whether summoning a squad of Intercessors will be more useful than AoE blasting with your heroes, but being the only real combat tactics available I’m not sure how long this will continue to be interesting.

Let’s be honest, these games are designed to be just interesting enough to get you hooked then withhold the end game items enough to make you want to purchase things with real money. Whilst there certainly are things to purchase (up to £99.99 if you happen to be an insane person) most of them are cheap and the game doesn’t throw it in your face as often as some. I’m sure that at some point I’ll find I can’t progress without investing money, but currently I haven’t felt the need.

The content that you’ll end up paying for looks to be unlocking legendary heroes. You can attempt to summon (or “rescue”) basic heroes several times per day, mostly getting resources but sometimes getting a hero. So far I have managed a Primaris Lieutenant, a Redemptor Dreadnought and a Chaplain. These are so “generic Primaris” that I suspect these are guaranteed for all new players. The real meat and potatoes will be in getting the legendary heros, which are surprisingly not all Ultramarines – in the screenshot below you can clearly see Pedro Kantor, Shrike, and Captain Lysander, which is nice.

I suspect that this game could be transferred to any other IP and work perfectly with minimal changes. The 40k setting is there but the story doesn’t make too much sense, the characterisation is stilted and basic (imagine a basic version of the “Space Marine Battles” books, pretty much just a vehicle for fight scenes to happen) and the heroes seem to be a mix and match of recent Primaris releases with some Inquisitors and a Sister of Battle thrown in for good measure. Yeah, it’s 40k but I’m not sure that makes it particularly special.

If you’re the sort of person that likes these “MMO strategy games” you will probably enjoy this. There’s more depth than most of these kind of games, although this can be quite overwhelming to start with. Maybe there’s too much depth! If you’re looking for the next killer 40k IP that takes off into the mainstream Dawn of War style this isn’t it, but it does the basic job it’s here to do pretty well, and I suspect that in a few months’ time a surprising number of us will be wondering how we’ve wasted 40 hours of our life (and maybe a few real-world coins we didn’t expect to spend) playing it.