A Look Back at the Battlestar Galactica Board Game – Turn Order 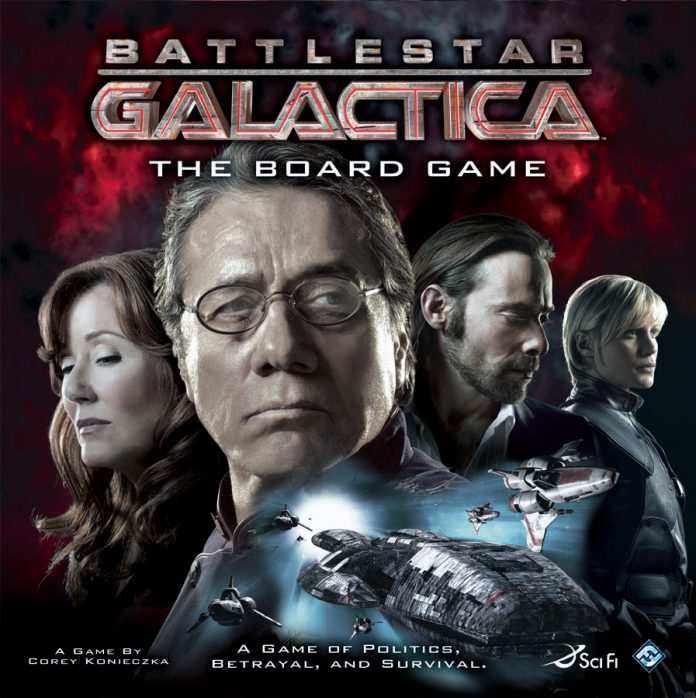 Battlestar Galactica was two and a half seasons of excellent television.

Why do I have to keep introducing shows this way? Well, on an intellectual level I know why. There’s a writing technique called Discovery Writing where the author is just kind of winging it, making it up as they go along, and sometimes the writing will surprise even them. If the author is surfing a powerful vibe then this can be an incredibly strong way to write a story, and the vibe BSG1-2.5 was surfing was 9/11. Naturally, Americans decided to process the emotion of ‘like 3000 people died’ in an identical way to ‘literally all of human civilization was destroyed by nuclear war’ and BSG was the media culmination of that armed paranoia. It was a vibe the showrunners could surf all the way to the Lionshead Nebula, but then it did the 2000s equivalent of Game of Thrones’ing itself and its cultural power was shattered overnight.

The eradication of BSG as a cultural force is a direct narrative echo for what’s already happening to Game of Thrones, and it comes back to exactly the same problem: They didn’t stick the fucking ending. They decided that they had gotten this far because of ‘unpredictability’ and needed to build up some sort of awesome final reveal to justify all the foreshadowing that they’d been throwing out without any sort of plan. It’s the Lost problem, the Force Awakens problem and it keeps fucking happening. If you write a bunch of mystery boxes you’ve eventually got to tell people what’s in the boxes. If you wrote a bunch of mystery boxes to grab people’s attention without having a narratively good reason for the mystery then you’ve betrayed the audience’s trust.

This is why Breaking Bad remains a powerful cultural force, with a movie and prequel series and people who still talk fondly about it today. Breaking Bad gave us an actual no-shit conclusion which followed directly and logically out of all the premises. What a relief that was! After decades of getting jerked around by endlessly serialized TV shows which aren’t allowed to die until they start to suck, the confidence it takes to write “The End” for a show at the height of its popularity – that’s what builds a cultural legacy. 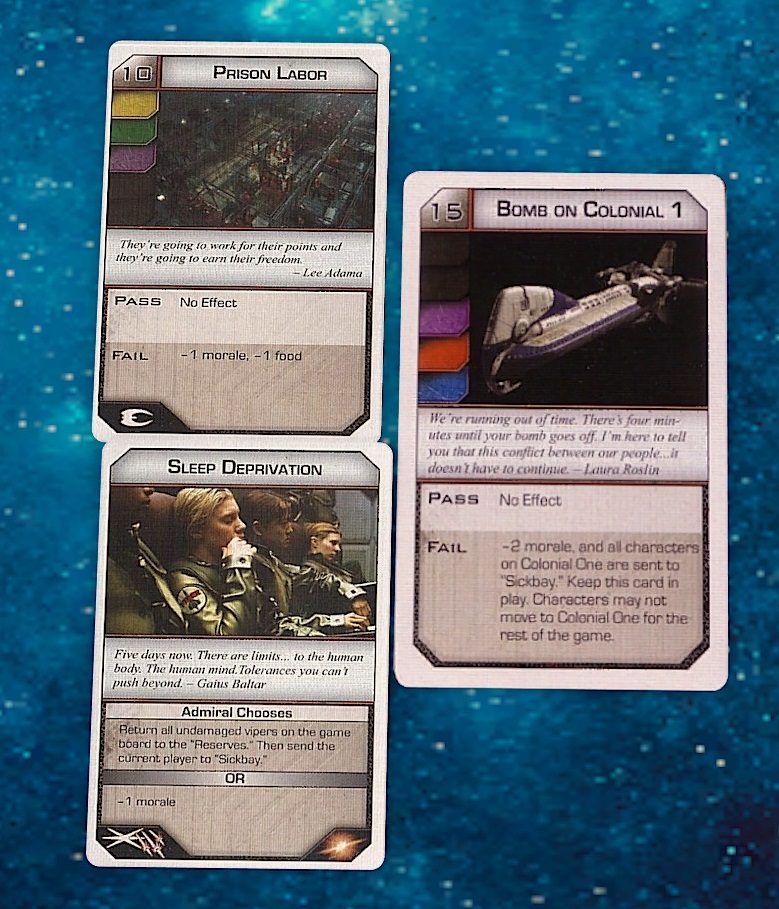 You play as one of the important characters aboard the Galactica – a political leader, a military leader, or a pilot. One of you is a Cylon infiltrator. Each turn a Crisis is generated – each one effectively an episode pitch, like a bomb being found in the armoury or the research team coming up with a way to test people for being Cylons. The humans contribute resources into a pool to overcome the crisis, but the Cylon can sabotage the effort by contributing the wrong kind of resources. Cue the accusations, the paranoia, and the locking of people in the brig for their crimes. Eventually the Cylon may go mask-off, return to the Cylon Fleet, and start deploying Super Crises in order to finish the job their infiltration and sabotage started.

This is a really effective core gameplay loop, one that does magnificently at putting the players into the headspace of the Galactica show. The constant beat of the crisis system causes a slow drip away of resources, with the occasional unambiguously nice thing coming out of the deck that feels like such a relief. But most of the time the best result you can hope for is ‘no effect’.

For each player’s turn, they draw five skill cards, move and perform an action on the Galactica – be that launching defensive fighters, doing engineering research to draw an additional card, or using a skill card that has an action on it, like Executive Order which gives another player an action instead.

Then at the end of their turn they draw a Crisis, revealed to everyone – this is a group challenge. The crisis will have a number of colours on it, usually two – cards of this colour entered will add their value to the check, cards of different colours will subtract from the result. Two cards from the Destiny Deck (an assortment of random skill cards from every colour, designed to help create plausible deniability for Cylon sabotage) are added to a pile, and then each player in turn adds cards face-down into the pile. The deck is shuffled, the cards are revealed, and the number is totaled up. Does it beat the Crisis difficulty? If not, then some bad outcome will occur. 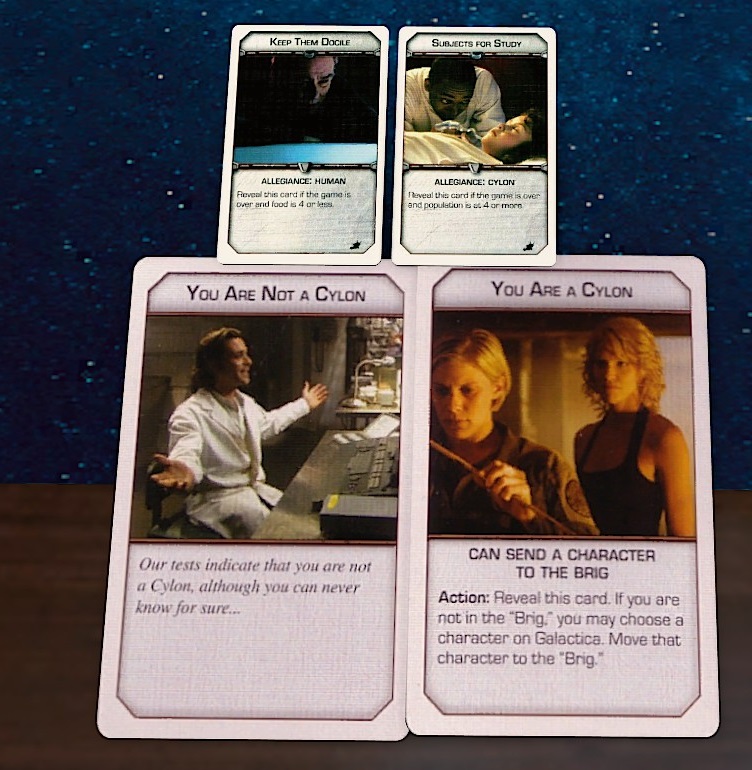 In addition to your hand of skill cards, players will have a Loyalty card. In a game of 4 players there’ll be 8 loyalty cards in the deck, one of which is a cylon. Players draw one, and when they are through a Cylon Sympathizer card is shuffled into the deck. Halfway through the game players will draw a second loyalty card to represent sleeper agents activating. Notably, if the humans are doing very well, then the player who draws the Sympathizer card also becomes a Cylon, turning a game from what might have been a 4 vs 0 to a 2vs2 in a stroke. It’s a really effective rubber-banding effect that deals with the problem that might have been caused from an unopposed early game for the humans.

In the expansions, there are added options for playing a revealed Cylon from the beginning. This is further complicated by the brilliant addition of Motive cards for the Cylons – you get two at the beginning, and another two halfway through the game much like human loyalties. Motives are either Human or Cylon aligned, depending which side’s win makes them trigger. The catch there, though, is that Human aligned Cylons tend to want the humans to win but barely – Win while having less than 3 food, for example. Cylon aligned Cylons want to defeat the humans in Honourable Battle – Humans lose while having more than 4 population. It’s a brilliant twist on the formula that makes even a revealed Cylon a deeply unpredictable force. 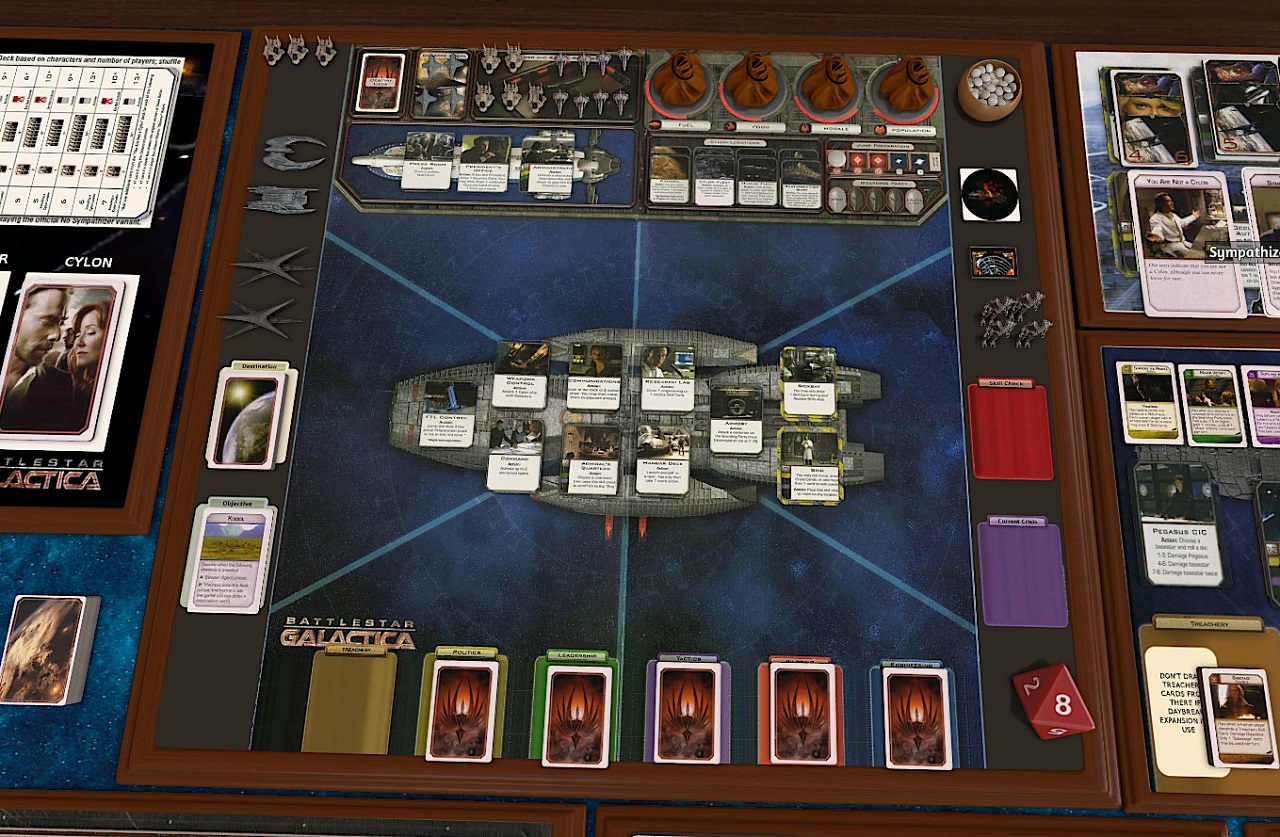 Finally, there’s the Fleet Board. Galactica is constantly being hounded by the Cylon fleet, and enemy ships will constantly jump in. Cylon ships will hunt and destroy Galactica’s civilian fleet, and losing a civilian ship loses resources comparable to failing a Crisis. To stop this, the humans need to launch defensive fighters of their own – and here is where the Pilot characters come in. Using their powerful cards, a Pilot can be a one-woman army, single handedly tearing through clouds of Raiders and even engaging enemy base stars directly.

Thing is, Pilots tend to be on the wrong end of politics. Nothing can shut down Galactica’s defense as effectively as a Cylon President imprisoning a Pilot on her way to the launch tubes. Or, if the pilot is herself a Cylon, just choosing not to launch at a critical moment could spell defeat for the Colonial space force. The Space War, then, functions like an ongoing Crisis where the battle of covert politics that normally plays out in the Crisis deck instead plays out overtly.

The Fleet Board is on a timer. Most Crisis cards progress the Jump Track, which when it hits 6 automatically sends the fleet through FTL to a new location, wiping everything off the fleet board as it’s all left behind. The Fleet can be jumped early, though at the risk of losing significant Population as people are left behind. The humans are looking to Jump often enough to cover 8 units of distance – maybe 4-5 rounds of Jumps – at which point they win the game.

While initially the Fleet Board is initially dealt with using random Crisis cards, I cannot recommend highly enough the Exodus expansion which replaces that system with a special Cylon fleet board. The Cylon fleet board means that rather than jumping away from the Cylons essentially destroying them instead they move back to a mustering area, building up strength and returning again and again. This means that the Cylon fleet must be continuously engaged to prevent its numbers from becoming truly overwhelming. It brings home the idea of the Fleet Board as the ultimate Crisis. 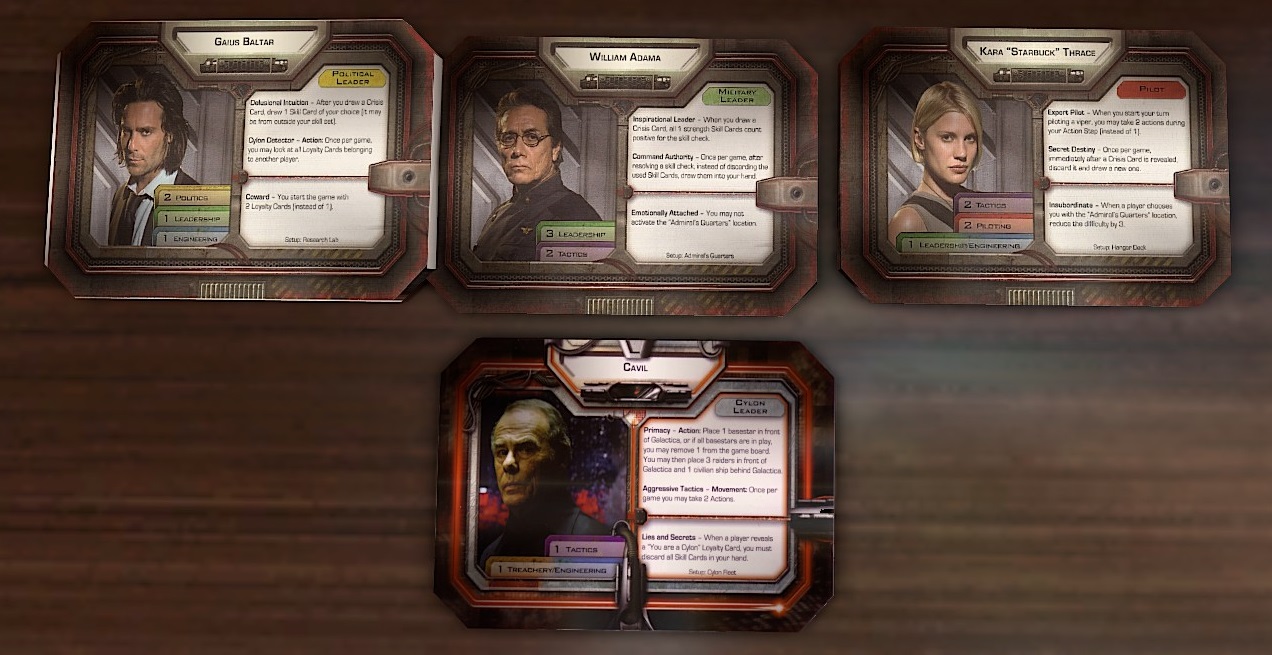 All together, the Battlestar Galactica board game is fantastic. I strongly recommend it, it’s the best and most involved mafia-style game I’ve ever encountered, and the expansions all work together to make it even better than the already great base game.

I also appreciate it for reasons hinted at in my opening discussion: Because it lets you experience the energy of writing Battlestar Galactica. When I said that the show was written using the Discovery Writing technique, what I left out was that Discovery Writing is the most entertaining way to write a story for most people – it’s the energy that drives D&D campaigns. You don’t know how the story’s going to go, and you may have to retcon your character into being a Cylon or having an unexplained Motivation shift mid-game, but when you do it with your friends it’s a plot twist and not a plot hole.

This is an excellent game. I’ve come back to it over a dozen times in TTS over lockdown and each time the story we tell and the ending we scrape together is satisfying. The Battlestar Galactica TV show walked so that the board game could run: this is the true legacy of the show, its strengths as strengths and its flaws remade as strengths.

While the Battlestar Galactica board game is long out of print, Fantasy Flight Games has recently released a spiritual successor known as Unfathomable.