In this week’s Hobby Heresy, Skails is talking about his latest project building a Soulblight Gravelord.

For this entry I am building a Soulbight Gravelord, or as I like to call them – Vampire. The base model for this build is Pious Vorne from Blackstone Fortress. This model has some great looking armor, motion to her stance and a kind of rough, neglected appearance that fits the character of this slightly feral Vampire.

Step one was removing the obvious imperial imagery. The purity seal was carefully cut off with a jewelry saw and used on my previous Ordo Zenos Henchmen entry. The reliquary and Adeptus Ministorum symbol were cut back with a hobby knife and sanded smooth. The little skull from the top of the reliquary was left on, it fits the theme. 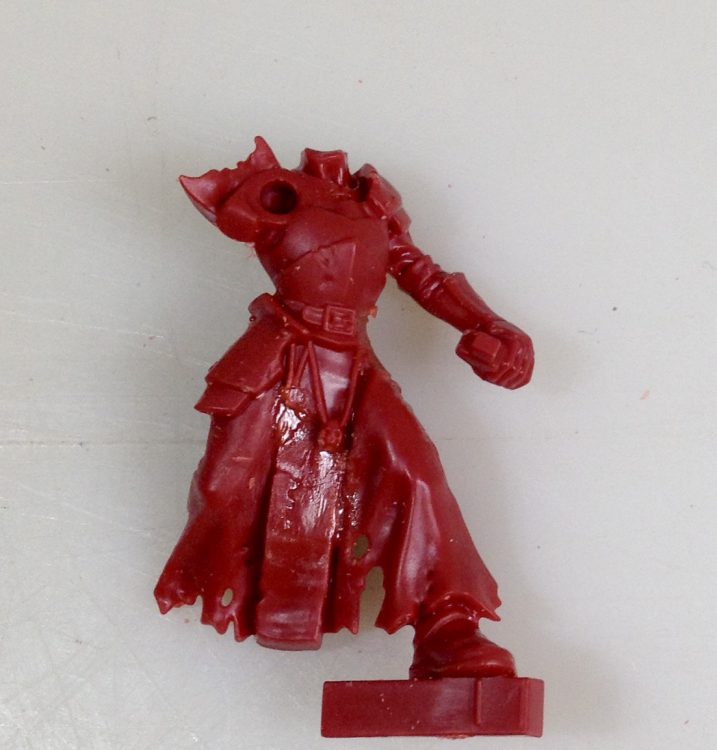 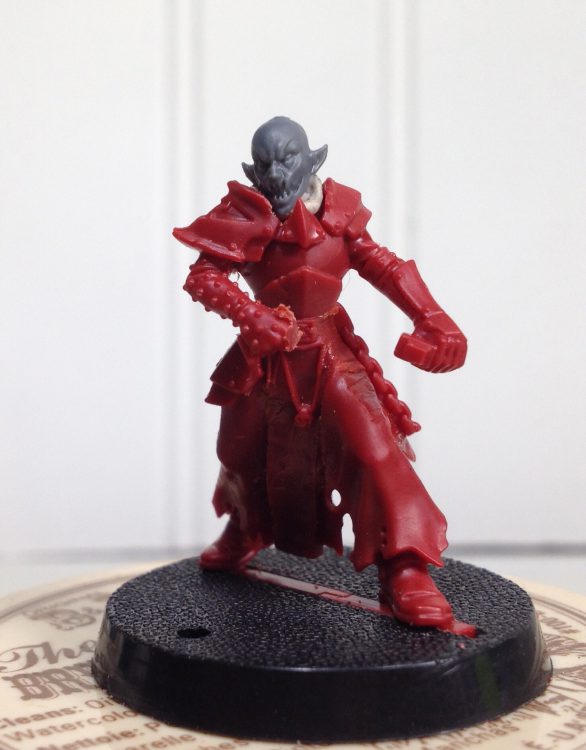 My vampire will be outfitted with a Halberd. This choice is mostly an aesthetic one, they are interesting weapons and I like the way they look. To begin with I drew the shape I wanted for the halberd head on a piece of .8mm plasticard (styrene sheet). After carefully cutting it out with the jewelry saw and hobby knife I drilled some holes in the blade, and a hole in the hook on the back, which was expanded into a triangular shape with the hobby knife. Finally, the blade edges were honed with the hobby knife and sanded smooth. 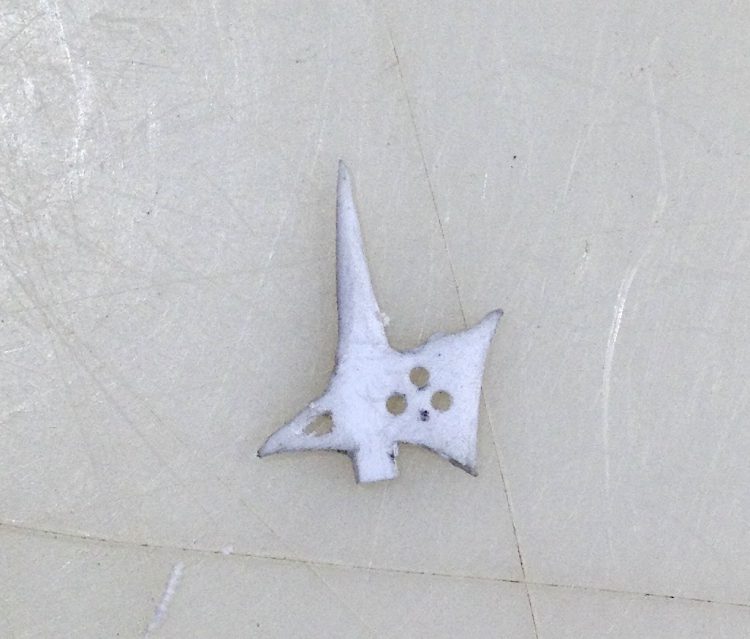 For the haft I used a spear from the newer skeleton kit, with a shank cut from an older skeleton spear. I initially had this rounded off as below, but later cut it straight at the top. 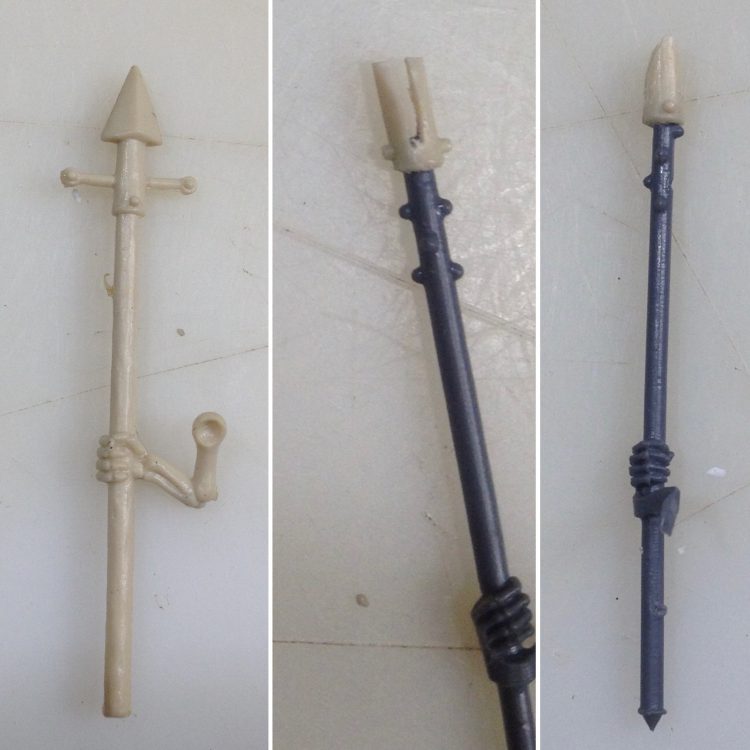 Here is the initial posing put together with poster tack. The left arm was cut at the elbow and the right arm below the pauldron to allow for moving to the correct angles. 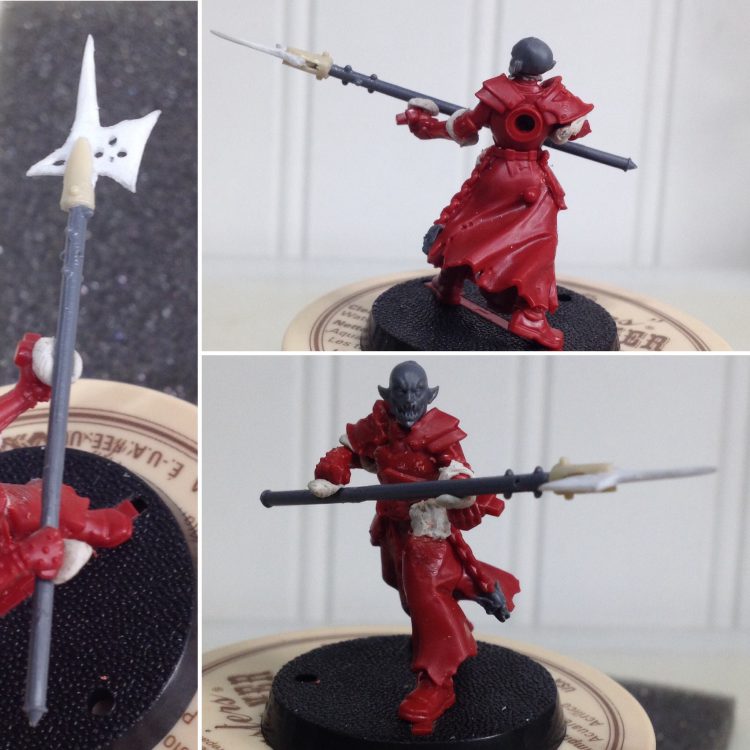 The hands had the fingers cut off and carved out enough to fit around the spear. The back of the hands and knuckles were left as intact as possible. 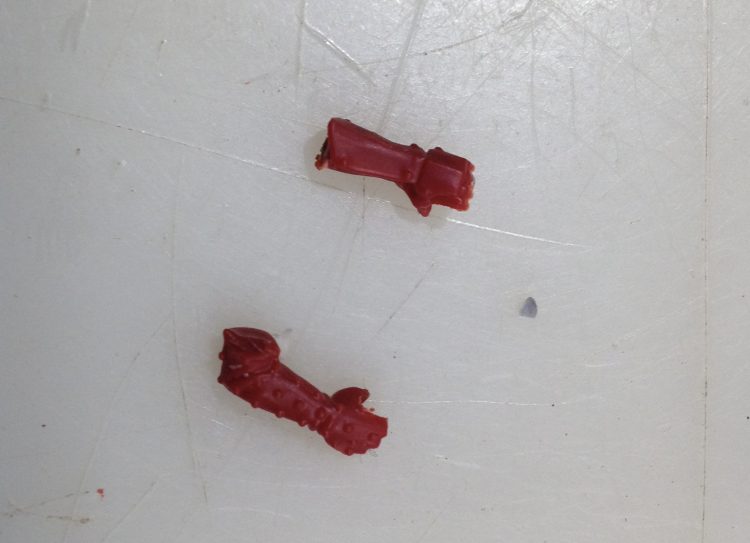 Then the hands were cut from the wrists with the jewelry saw, and glued to the haft close too the position determined by sticky tack posing. 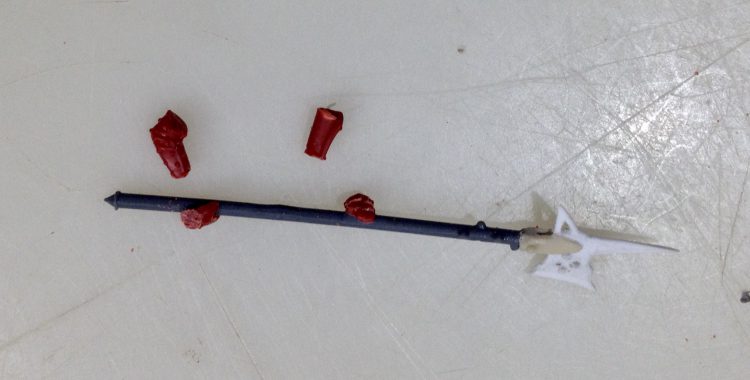 To reattach the arms holes were drilled for paper clip pins. The same was done to the wrist so the hands could be connected. 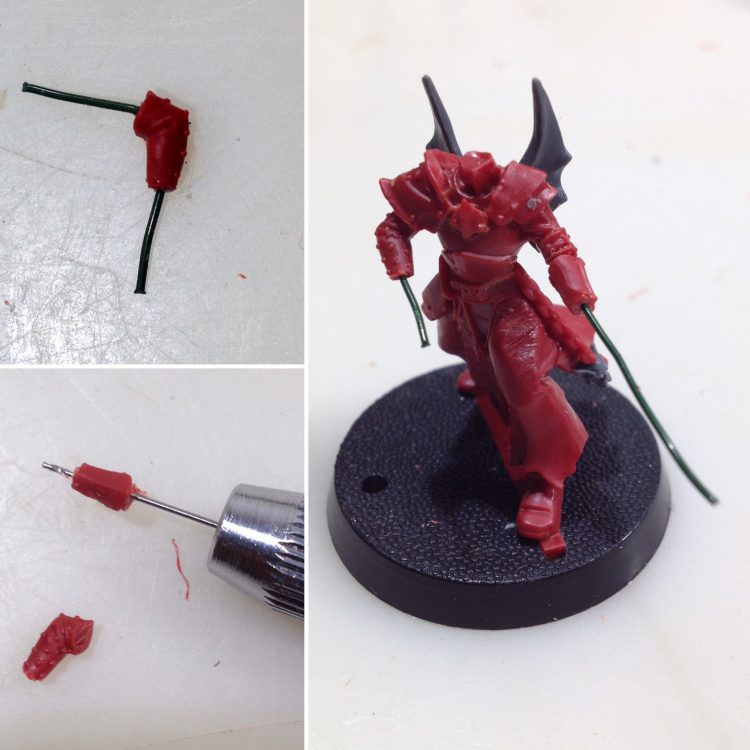 This image shows the inspiration for the build, and the initial greenstuff work on the head. The illustration is from the Vampire Counts 5th Edition army book. The greenstuff nose ring fell off at some point, and replaced later. 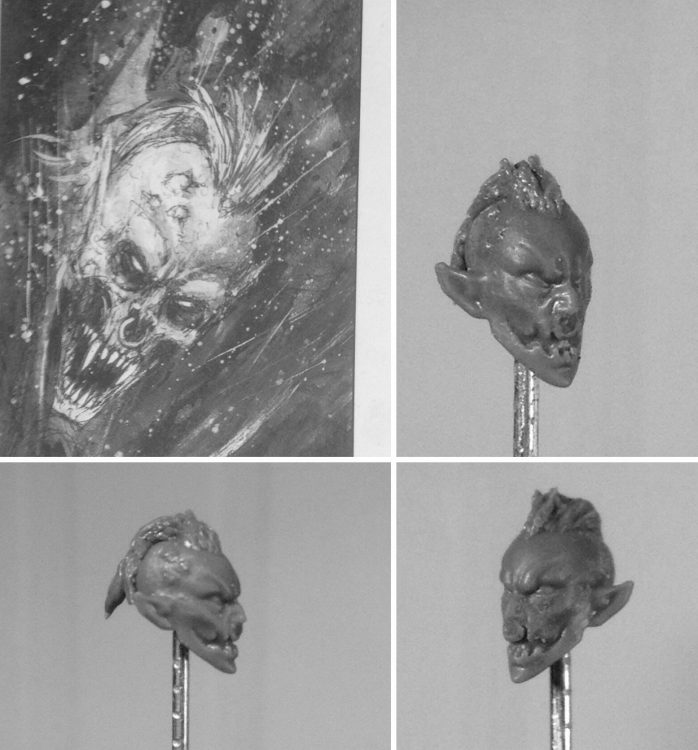 This bit is some spinal column from Ossiarch Bonereapers Arch-Kavalos. I cut out a section of spine to put on the back of the armor over the hole for the original backpack. 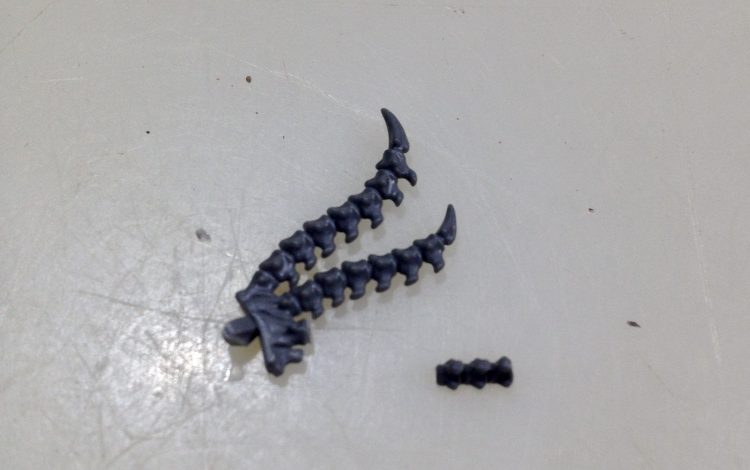 Here is everything so far: Arms and hands pinned together, head glued on, spine affixed, and a couple other bits attached to the waist. The skull on chain is from plastic Empire Flagellants, and the little bag is from Grave Guard. At this point its ready for gap filling and finger sculpting with greenstuff. 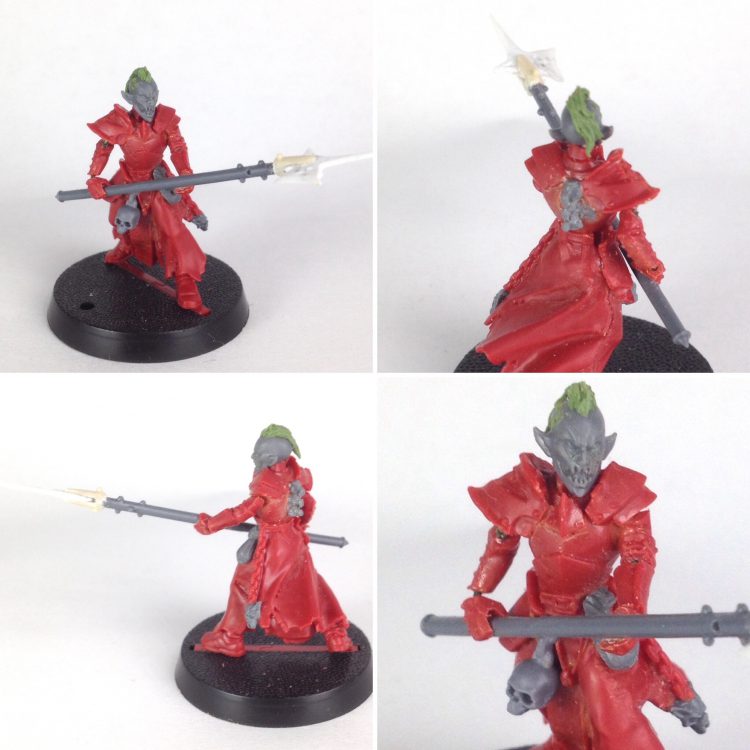 For the final build I added wings from the Crypt Flayer kit. These are glued on and blended into the back with greenstuff. I  also made a cobblestone base. The replacement nose ring is a bit of coiled copper from guitar wire wrapping. This was super fiddly to do as it required some cutting and sanding to fit right. Finally, the cheekbones were built up to give the eyes a more sunken look, and the nose was filled in around the ring. 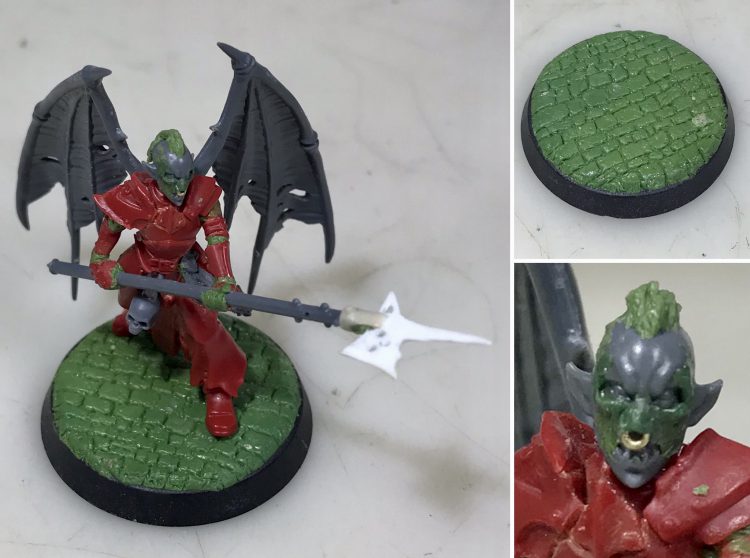