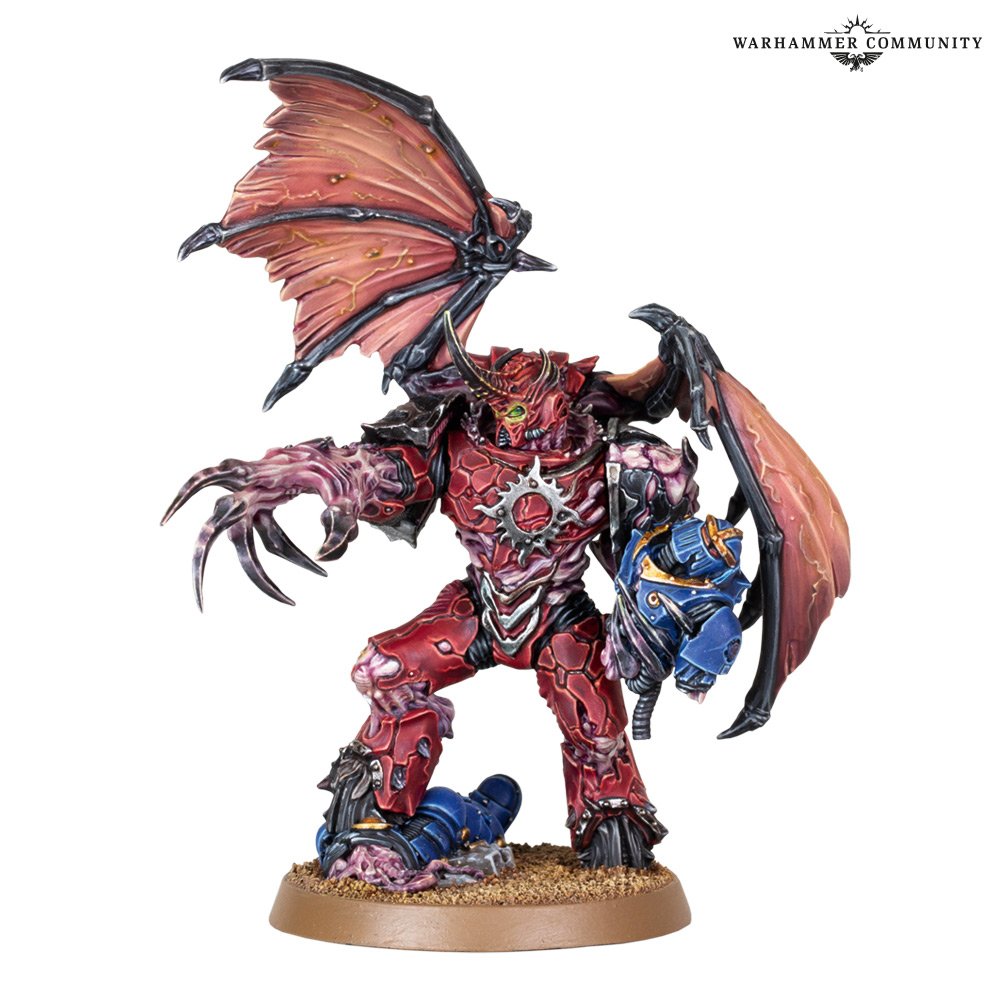 Hot on the heels of the recent surprise release of Hydra’s Devastation and the Huscarls, comes a real fan favourite in the form of Argel Tal. His model had been teased previously but now Forge World have delivered some custom rules for him. So we’ve opened the bleak grimoire and browsed its cursed pages and we’re jotting down our thoughts on the new rules.

Argel Tal is unique as a Word Bearer who was one of the first Astartes to enter the Eye of Terror. As you might expect, he returned… changed – becoming one of the Gal Vorbak, or “Blessed Sons” in old Colchisian. Elevated to Chapter Master of the Serrated Sun chapter of the Word Bearers, Argel Tal was a powerful Daemonhost for a Neverborn called Raum. Argel and Raum led the charge during the Drop Site Massacre, and subsequently slaughtered a squad of Custodians when those golden warriors discovered the betrayal. This gave him his signature weapon – a Guardian Spear – for which he somehow managed to overcome the weapon’s potent gene-lock and wield it to its full potential. In time Argel would form a close, but unlikely, bond with Khârn of the World Eaters, ultimately fighting in many of the conflicts during the Shadow Crusade in Ultramar.

Argel’s model is enormous, as can be seen by the Mark II Marine he’s torn in half. Sadly he’s missing his signature spear, but as soon as this model is out in the wild I expect we’ll see conversions fixing that with no problem.

Turning to his rules, he’s an HQ unit for a Word Bearers army (unsurprisingly, Traitor only!), costing 185 points. He’s got a souped-up Gal Vorbak statline: S5, T5, W4, A5 and I5 are no joke, with a 2+ save, and 5+ invulnerable save thanks to the Daemon rule. He is Jump Infantry and Very Bulky which, straight off the bat, do limit what you can potentially do with him (as discussed below). He does, however, give serious buffs to Gal Vorbak with his Master of the Vakrah Jal rule. If Argel Tal is your Warlord, then Gal Vorbak become Troops (!) and if he’s is in a unit of just Gal Vorbak, then they all get Feel No Pain rule! Given they are high Toughness, multi-wound models, this is a real boon.

In addition to this, Argel Tal is Damned, so cannot be scoring, and has Daemonic Claws which are S6, AP3 melee weapons with the Rending and Shred rules. This is solid, but you have to be careful putting him against 2+ armoured units as doing so would basically force you to rely on Rending to push damage through. That said, with Rage he’s got 7 attacks on the charge with re-rolls to Wound, so he’s no slouch in combat. If he’s with Gal Vorbak you would want the Dark Martyr to have a S10 Power Fist anyway, so they can do the heavy lifting against targets with a 2+ save…

Overall, I think either you need to accept that as Jump Infantry his transport options are limited and you’ll have to walk some Gal Vorbak across the board and take advantage of the Feel No Pain, or run Argel with some Destroyers or Ashen Circle, or even just some souped-up Assault Marines with a Chaplain to use the fast movement. I can’t wait to see him painted up on the tabletop; I think he will be very popular with Word Bearers forces!

On top of that, there are two amazing Ultramarines Praetors just released for pre-order – top work by Forge World continuing their Praetor series!