How to Paint Everything: Craftworld Iyanden

In our How to Paint Everything series, we take a look at different armies of the Warhammer universe, examine their history and heraldry, and look at several different methods for painting them. Today we take a look at the Craftworld Iyanden, a craftworld devastated by Tyranid Hive Fleets and whose forces now consist more of the dead than the living.

Once the largest and most important Craftworlds of the Aeldari empire, Craftworld Iyanden has just been hit with one disaster after another since the birth of Slaanesh. They were raided a bunch of times by Chaos warbands, decimated by an Ork WAAAGH, and then found themselves right in the path of Hive Fleet Kraken. The resulting battle saw the Tyranid fleet overrunning the craftworld’s defenses and devouring millions. The hive fleet was only turned back by the intervention of Prince Yriel, a former inhabitant of the craftworld whose reckless tactics had seen him exiled but suddenly seemed a lot more valuable when everyone was about to be eaten by space bugs. The Tyranids were eventually defeated but the costs were massive. The devastating losses suffered left Iyanden without the manpower to field large armies of guardians and aspect warriors, and instead they’re forced to rely on Ghost Warriors – the Wraithguard, Wraithblades, and Wraithlords. These shells are animated by the spirits of the craftworld’s dead, forced to fight to protect the remaining inhabitants of the craftworld.

The literature around Eldar is surprisingly thin for a faction as old and integral to the 40k storyline as they are. You can read more about Prince Yriel in Valedor by Guy Haley, which covers Yriel’s attmepts to stop two Tyranid hive fleets from merging into one megafleet and his uneasy alliance with the Drukhari. The follow-up novel, Wraithflight, follows the wraith fighters of Iyanden taking on the Tyranids of Hive Fleet Leviathan.

Painting Iyanden can be pretty daunting, as they have a lot of yellow to paint. Yellow can be pretty unforgiving, and often requires a lot of thin coats to get good coverage, which can mean a chunky texture if you aren’t careful about thinning your paints.

I’ve always liked the Iyanden scheme and so I thought this would be a cool opportunity to paint one. I picked a Wraithblade for this particular scheme, since it’s got some large bone areas to cover. Something to note about my scheme is that I’m working with a brush only, so if you’re looking for an airbrush-free method for painting these bad boys, here’s one method to consider. 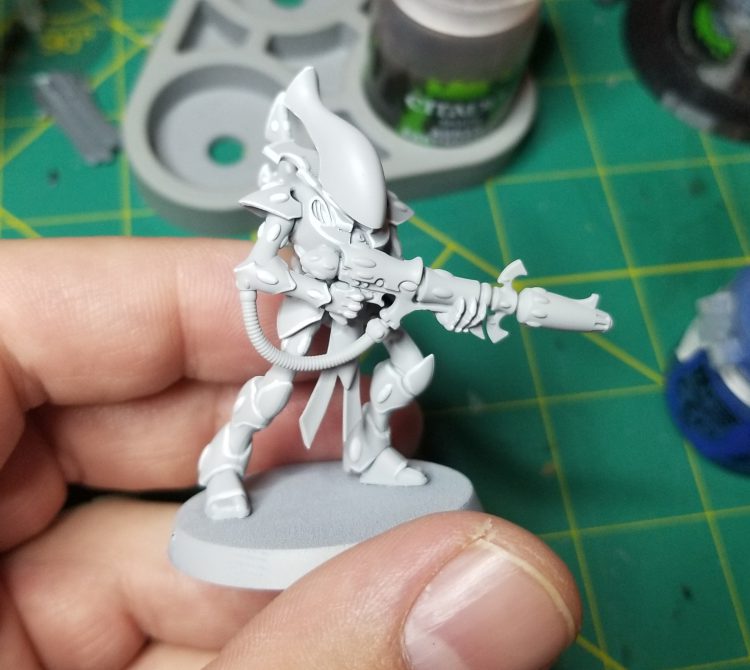 I’m pretty crazy when it comes to priming things black but I’m not stupid, so I started by priming my Wraithguard model with a coat of Grey Seer. Originally I was curious to see how Contrast Iyanden Yellow would work out on this model, so I decided to do some pre-wash highlighting, hitting it with edge highlights of Reaper Pure White to potentially create a faster process with a highlighted undercoat. 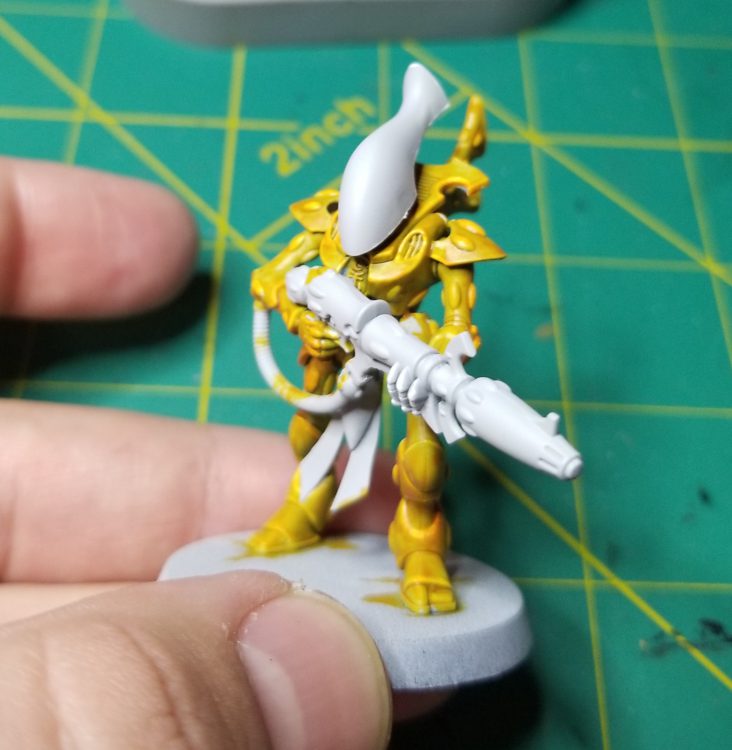 I really wasn’t happy with the first coat of Iyanden Yellow. It was a bit too green, possibly because I used Grey Seer instead of Wraithbone, and it was blotchy in ways that definitely weren’t working for me. The highlights on the undercoat definitely showed through though, so if you’re going this route, consider doing likewise. If you’re interested in the quick version that’s all contrast, check out Beanith’s tutorial below for an example of what that looks like with less effort. At this point I decided to just go ahead and basecoat the model with full yellow. The upside – and something I’d consider on future models – is that Iyanden yellow actually made for a fine first thin coat. 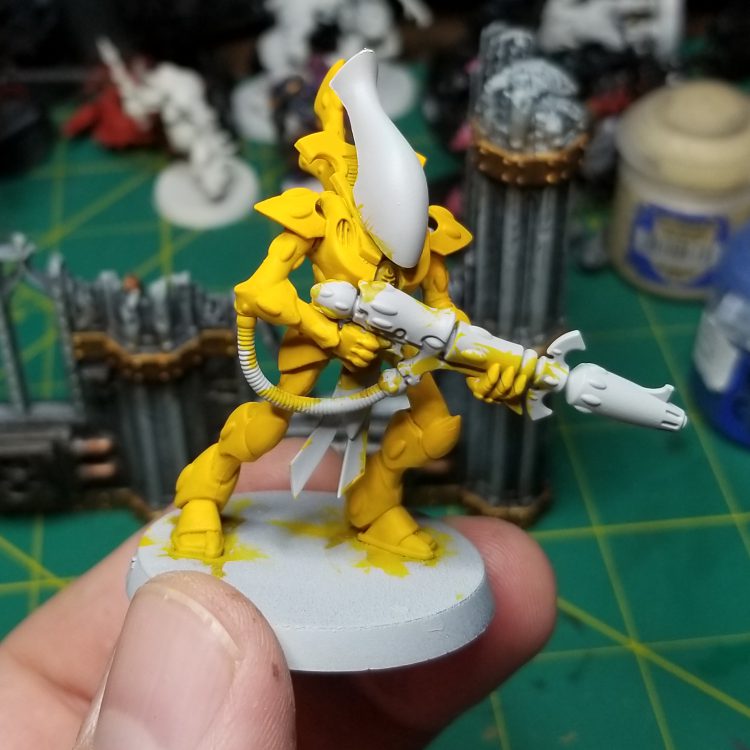 Alright now we’re talking. I’ve applied a couple of very thin coats of Yriel Yellow, working toward as uniform a color as I can get. I’m much more happy with this bright look, and some of the undercoat edge highlights are still providing subtle effects. 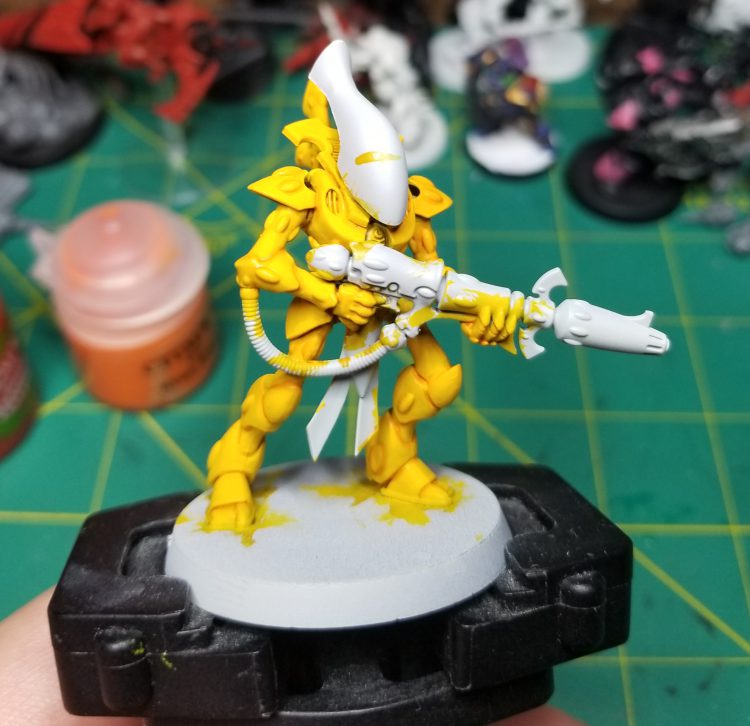 Time to add depth. There are two steps here – the first is to take a thinner brush and paint in the recesses and around the contours with Cassandora Yellow shade – this gives the model much more definition and makes the raised parts stand out. The other piece of this is edge highlighting. I trace around the edges with Flash Gitz Yellow and do some small spots of the color on the raised ovals. 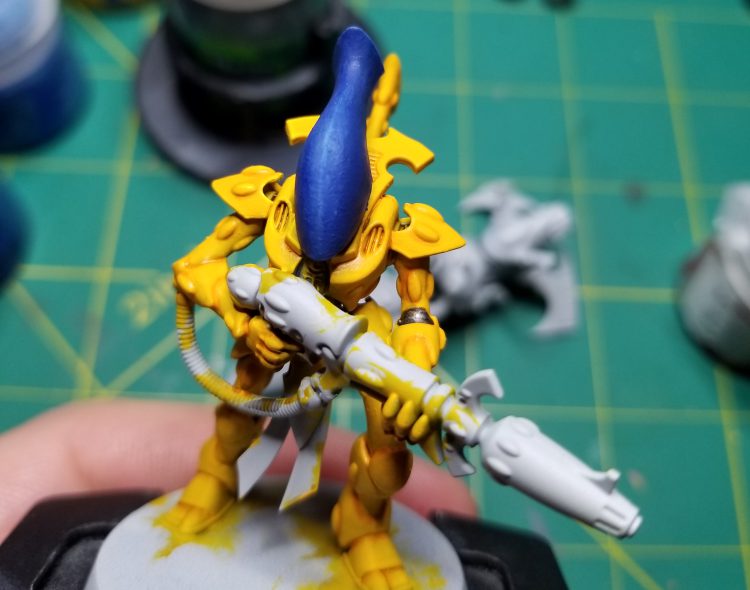 Time for the dome and some of the other details. The exposed areas at the joints are just Leadbelcher washed with Nuln Oil. The head is Kantor Blue blended up to Altdorf Guard Blue and Lothern Blue. I worked to get as much of an even blend as I could here, then added a more pronounced line of Lothern Blue going down the middle. The helmet was edge highlighted with Lothern Blue. 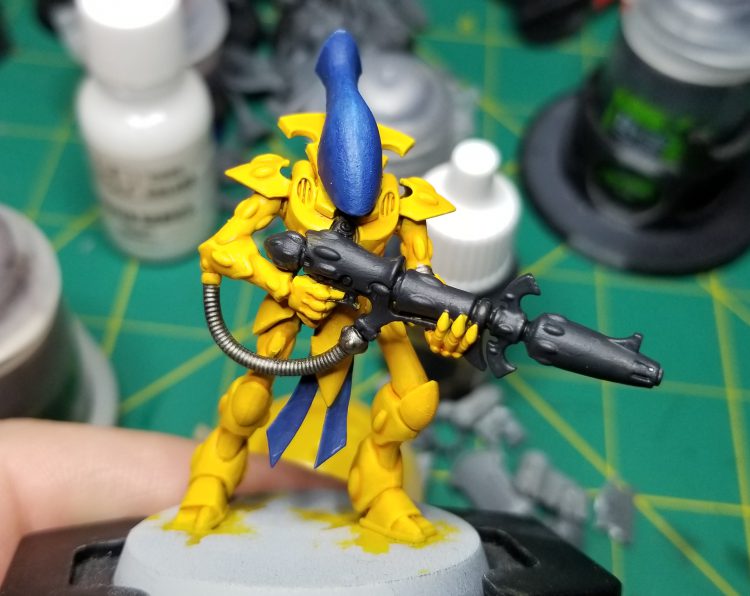 More detail work. The metal piping is Leadbelcher + Nuln Oil and the gun is Corvus Black washed with Nuln Oil. The tabard is Kantor Blue highlighted with Altdorf Guard Blue. 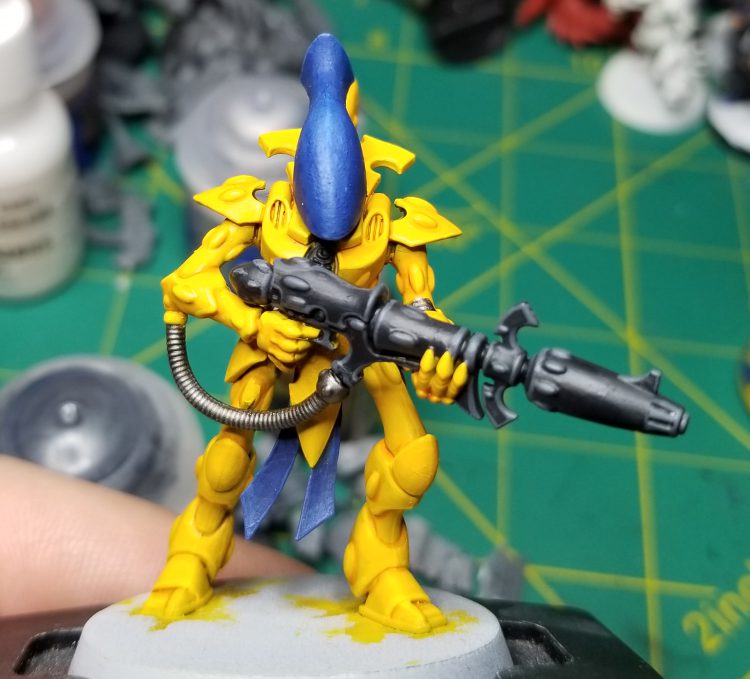 Final edge highlights step. The gun gets some edging with Mechanicus Standard Grey. The tabard gets an edge highlight of Altdorf Guard blue. 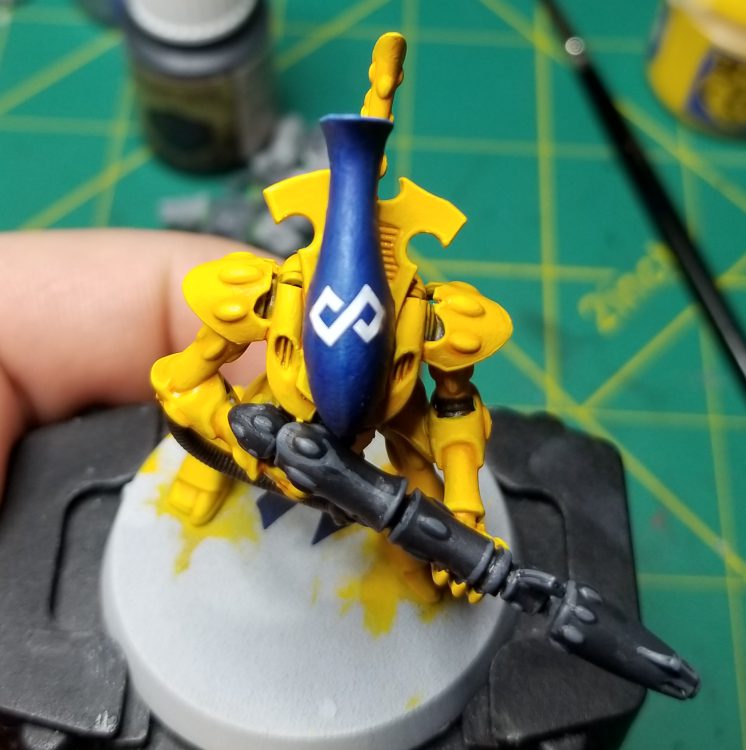 Final touches before the base. Adding a white transfer to the dome, which I then paint around to make sure it’s more seamlessly integrated with the model. Overall I’m really happy with how this turned out – the blue and yellow are very striking and it wasn’t nearly as much of a pain to paint the yellow armor as I originally feared it would be.

Ah the Iyanden space elfs, a long time reoccuring foe against whatever shiney thing I was distracted by that week. Over the years my mate has collected a largely wraith themed Space Elf army which depending on the edition has ranged from absurdly powerful to just absurd, but kudos to him to sticking with his little mostly yellow and blue pointy eared friends through thick and largely thin times.

Last year to celebrate him turning very old, a friend and I decided his Murder Clown collection needed some zippy reinforcments via the Harlequin Skyweaver and we tried to match them with the Iyanden style theme he uses throughout his collection because he is a monster that likes painting yellow even back in the days when Bad Moon Yellow was a hateful chore to use.Luckily these days I have Constrast Iyanden to which I have waxed lyrical about many times… and I will admit the newer yellow paints these days are so much better too.

Using a Grey Seer Undercoat, I’ve simply smooshed on a couple coats of Contrast Iyanden Yellow and then I had a crack at masking using some cheap blue masking tape to paint the Contrast Ultramarines Blue… Next time I’ll shell out for the proper hobby masking tape or maybe even the putty.

The Spirit stones were covered in the HTPE Gemstones article but my receipe is just a metalliac silver followed by pretty much any thin coat of contrast or glaze you like. As a little signature I added a happy little Nurgling hanging on for a spot of mischief using Contrast Plaguebearer Flesh and Contrast Skeleton Horde.

Bish Bosh Bash, an incredibly simple receipe that shows Yellow is no longer the worst colour in your toolbox.

If you’re working with a lot of yellow, it’s potentially worth it to skip the brush and basecoat your minis with an airbrush. If you’re looking for more methods of tackling the yellow armor of Craftworld Iyanden, check out our How to Paint Imperial Fists article, which covers several other methods for painting yellow armor, both with brush and airbrush.

Iyanden are a storied craftworld with what can be a daunting color scheme, but it’s one that’s worth experimenting with – the final result can be very striking on the tabletop and the wraith constructs that define the facion are some of the coolest models in the 40k range. There’s also a lot of opportunity to play around with details on the yellow and blue armor as well. Hopefully this guide gave you some ideas for your own approach. As always, feel free to send any questions or feedback to contact@goonhammer.com.